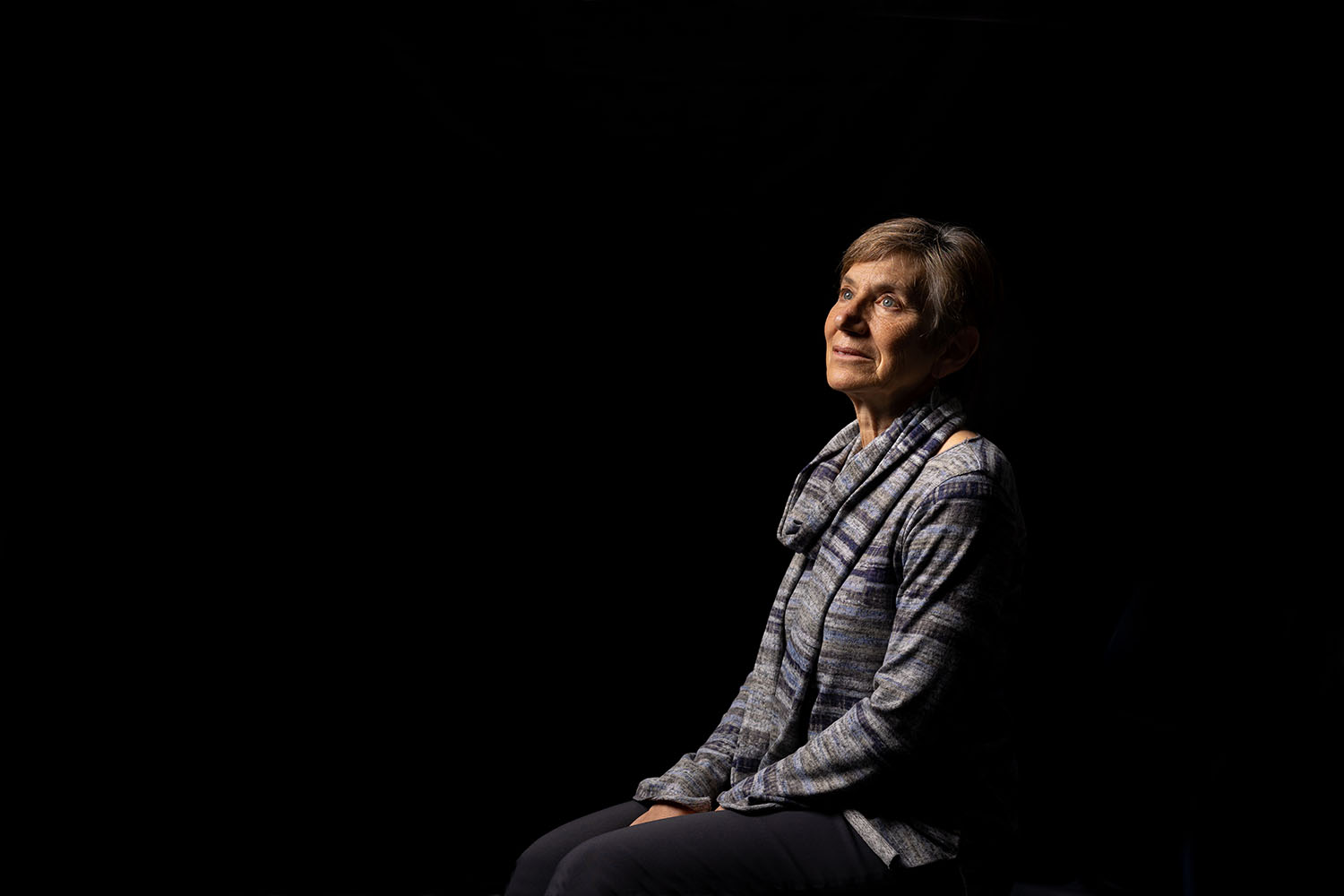 Susan Wolf speaks over the occasional drilling sound of solar panels being installed on her roof. Behind her are three colorful paintings on three different walls, which come in and out of focus as her hands animate her words in front of the computer camera. In our Zoom interview, we discuss highly abstract topics — the concept of human beings versus our biological nature, the philosophical research process, the importance of humans in the universe — so her speech is filled with qualifications.

Sometimes, as her blue eyes move away from the screen to track her thoughts, it seems like she’s thinking out loud. When she struggles to verbalize concepts that hold no physical form, she tilts her head a little, pauses, and tries to explain again.

When Wolf, a UNC-Chapel Hill philosophy professor, hears a widely accepted belief, she thinks, “Is that true, though?” And then she begins writing.

In the last few centuries, scientific discoveries — like the earth not being the center of the universe, and humans having evolved like every other animal — have reduced the stature of humans in the world.

“At one time, the idea of being a human was something to be proud of. That idea and motivation is, for reasons I’m sympathetic to, largely regarded now with some level of shame,” Wolf says. “It seems obnoxious, small-minded, and egocentric.”

But when Wolf hears people comparing the importance of humans and other animals, she questions whether it’s true that our regard for non-humans should equal our regard for each other. While she agrees that from an objective perspective humanity isn’t particularly special, there are philosophical reasons why one human would value another more than a dog or tree.

“The thought is not so much that we as a species are special, but that there’s something right about the idea that, as a kind of being — which I’m calling human, but isn’t meant to be biological — it’s perfectly alright for us to be special to each other,” Wolf continues. “Special to each other doesn’t mean every non-human counts for nothing or is just there for our pleasure.”

When it was in vogue for philosophers to distinguish humans from other species, Wolf says they focused on reason — an ability that makes us superior. That seems too simple to Wolf. Granted, it’s the most obvious answer. There are examples of animals loving, joking, and making art — though their expressions are simplistic. But Wolf is sure that if we’re defining humanity through the lens of why humans care about other humans, reason isn’t the whole story.

Wolf hasn’t identified all the reasons underlying humans’ love for one another, but she’s working on it.

What if we were to compare humans to something else, something that only has the capacity to reason?

Advanced artificial intelligence (AI) — like one of the automatons from “iRobot” — or aliens could have the rational abilities of humanity but lack the emotional experience, Wolf says. She compares humans to these fictional creations to try to identify elements besides reason that are crucial to humanity.

“There are lots of hypothetical rational creatures that are very inhuman, and you could never connect with them in emotional and important ways,” Wolf says.

Such beings may not have empathy, curiosity, or creativity — key traits to the human experience. To get a general picture of what makes us human, Wolf tries to abstract from such characteristics to uncover more general properties inherent to humanity.

For instance, empathy and curiosity signify an interest in the world and in beings outside of oneself. Further, humans need community as sociability is inherent to humanity. Not only are we interested in others, but we have a need to connect with them. If rationality alone can generate these traits, then rational aliens and AI will have them, too. If not, this indicates that being human is not just a matter of being a “rational animal.”

“I’m not positive that there will be one general property, in addition to reason, that makes us human,” Wolf says. “It might be a lot of different things.”

So far, Wolf has identified several concepts important to the human experience. Each individual has a perspective, using a set of values and experience not shared with all other humans to evaluate what they encounter in the world. Sociability and the ability to learn and apply what we’ve learned are also important traits. While we share some of these characteristics with other organisms that don’t have our level of rationality, they also differentiate us from the AI and aliens Wolf is imagining.

Wolf’s favorite courses in college involved math or literature. She loved math for its pure abstract thinking and literature for its exploration of the human condition. She found philosophy married the best parts of both.

“Philosophy combined the ability to think big thoughts,” Wolf says, stretching her arms across the screen, “in this very rigorous way with attention to the human condition.”

In philosophy, big questions like “What is it to be human?” may never have an indisputable answer.

“There will be multiple plausible and interesting answers,” Wolf says. “They may even compete with each other. But there may never be a winner.”

Unique to questions regarding humanity is the ever-changing nature of our being. Simply trying to define present-day humans is difficult because we all act so differently depending on our culture, neurological state, and personal preferences. And those of us who grew up with high-functioning computers in our pockets are different from those who bought the first household desktop.

“Things are moving very fast in terms of our relation to technology which makes it likely that the answer will be different again, in a shorter period,” Wolf says.

Consuming the perspective of all kinds of people and those close to them is important. It’s possible to exclude people from humanity for being different if a philosopher isn’t careful. It would be particularly easy to otherize neurodivergent people. Wolf wants people to push back if they disagree with her conclusions or feel like she isn’t considering a demographic. She also says the properties she identifies as human won’t apply to every individual in such a diverse group. Having these properties isn’t a source of superiority or pride.

Wolf remains open to new ideas and revising her own in the light of new truths. Maybe, someday, humans will encounter advanced aliens or create sentient AI, able to reason as well as humankind. If she were ever to encounter such a creature, she may need to change the ideas she had about what traits these futuristic beings have.

“There’s no consensus on this view, but I don’t think of philosophy as aimed at solving problems, so much as at articulating problems,” she says. “It is worthwhile to just think through certain kinds of questions. It makes you more conscious of who you are, as an individual and as a human, even if you don’t get to an end to the inquiry.”

Susan Wolf is the Edna J. Koury Distinguished Professor in the Department of Philosophy within the UNC College of Arts & Sciences.