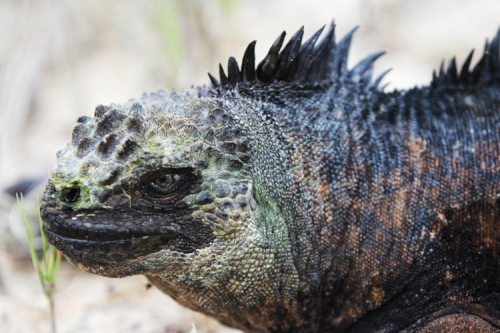 Photo by Mary Lide Parker
Marine iguana populations in the Galápagos Islands decrease during El Niño events. The oceanographic climate phenomenon brings warmer waters to the islands, causing the the marine food supply to diminish. UNC researchers are looking at the productivity levels of Galápagos waters to learn more about the severity of this year’s El Niño.
By Alyssa LaFaro
Earth

Some of the planet’s tiniest organisms are visible from space. Phytoplankton — single-celled, water-dwelling algae — are one-millionth of a meter in size and produce about 50 percent of the oxygen we breathe. These microscopic oxygen factories inhabit the sunlit portion of the world’s oceans, supplying nourishment for much larger organisms and valuable information for scientists.

Millions of phytoplankton swirl around in jugs of seawater, collected just moments before from the Equatorial Pacific Ocean. Adrian Marchetti filters the water in his makeshift lab — an old garden shed on the Sierra Negra. This Galápagos National Park Service vessel is typically used to monitor the waters surrounding the islands. “These vessels don’t have the equipment we usually use to do our work, so we had to improvise,” Marchetti, a UNC-Chapel Hill oceanographer, says with a laugh. 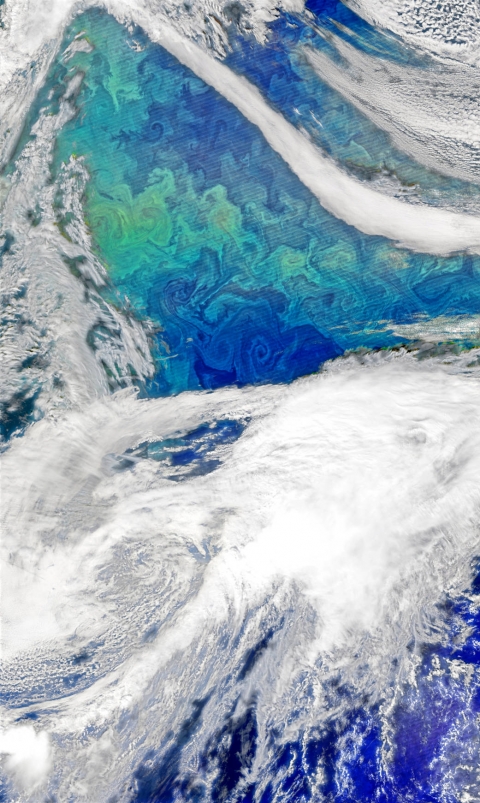 Meanwhile, his partner on the expedition, Scott Gifford — also an oceanographer from UNC — examines heterotrophic bacteria. When describing these organisms, Gifford compares the ocean ecosystem to a farm. “The phytoplankton are the crop,” he says. “Ultimately, the organic matter produced by those crops support us and other animals. In the ocean, heterotrophic bacteria are like the insects; they consume that organic matter. If they consume a lot of it, that means less food available to support animals higher in the food web such as fish and marine mammals.”

Scientists call this process the “microbial loop,” and Marchetti and Gifford are particularly interested in this one because the waters surrounding the Galápagos are warmer than normal. El Niño has arrived. Every five to eight years, this climate anomaly throws the islands off balance for 12 to 15 months. Phytoplankton decrease, causing a disruption in the food supply. Small fish that eat the phytoplankton die off, and that cascades up the food chain. A surplus of rain boosts the terrestrial environment; land plants grow like wildfire and the bird populations become overwhelming. 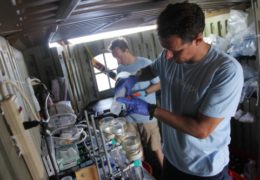 On the ship deck, Marchetti squints as the Galápagos sun sets over the Pacific. He lifts a round, plastic sampling device — called a Niskin bottle — and connects it to a long steel cable attached to the ship. He flashes a thumbs down at Gifford, signaling the device is ready to go into the water. Using a simple cable-and-weight system, the bottle drops to various depths, collecting slightly different samples of water to compare the diversity, growth characteristics, and interactions of the phytoplankton and bacterial communities (called the marine microbiome) at those depths.

Phytoplankton growth depends on available sunlight, temperature, and nutrient levels — the Galápagos Archipelago houses some of the most nutrient-rich waters on the planet.

When strong winds blow across the ocean, surface water gets pushed away, causing cold nutrient-rich water to flow up from the deep ocean through a process called upwelling. “Those nutrients fuel a lot of phytoplankton growth in that area,” Marchetti says. “And that cascades up the food web to support these very rich, charismatic organisms that live in the Galápagos — the fish, the sharks, the iguanas, the sea lions, the sea turtles, and of course, the penguins.”

When El Niño strikes, upwelling slows, so fewer nutrients make it to the surface, and the waters heat up. “El Niño can vary in severity,” Marchetti says. “Sometimes it’s mild, meaning a less drastic decrease in upwelling. But then you have ones that are incredibly strong — and they can last a lot longer and have a serious impact on the Galápagos.”

El Niño is strong this year — predicted to be one of the strongest on record. Parts of the Pacific are hotter than ever recorded in the last 25 years, according to the National Oceanic and Atmospheric Administration’s Climate Prediction Center. So it’s important, more than ever perhaps, that researchers gain information from these events to help them predict what’s going to happen as the earth continues to warm.

Gifford wedges himself into a three-foot space along the portside of the ship to monitor his water samples. He records data on a piece of paper slowly soaking through with rain. He chuckles. “This is the tightest space I’ve ever worked in.”

Phytoplankton play a crucial role in the oceanic carbon cycle. Through photosynthesis, they pull carbon from the atmosphere into the deep sea and give off oxygen. Heterotrophic bacteria, on the other hand, consume carbon. The balance between phytoplankton and bacteria is a critical factor for regulating the carbon cycle, which, in turn, affects the planet’s temperature. Gifford measures the rate at which these microbes take up oxygen to figure out how much carbon they consume.

He also searches for different types of heterotrophic bacteria to learn as much as he can about the diversity of these microbial communities within the Galápagos. “What’s cool about the Galápagos is you have all these different ocean currents coming together in a relatively small area,” he says. “By going around the islands, you are sampling all these different types of ocean communities. And while they may all look the same under the microscope, the diversity of phytoplankton and bacteria in these communities is staggering, with hundreds to thousands of different species in a single liter of seawater.”

Gifford wants to know more about bacterial production so that scientists can predict how life across the globe will be affected during events like El Niño. “There are so many factors,” he says, “and it’s those factors we tried to measure and integrate into a bigger understanding of the ecosystem.”

Researchers from the Universidad San Francisco de Quito (USFQ) examined sea lions, seaweed, sea turtles, and iguanas. Investigators from the Galápagos Science Center — a collaboration between Carolina and USFQ — also studied the rate of ingested plastics in marine animals and birds through collecting plastics and taking samples from various species around the islands. Six staff members from the Galápagos National Park Service also joined the expedition to observe iguanas and search for insects that may have been introduced to the islands.

The Galápagos can act as a laboratory for predicting what happens when water gets warmer here, and in other parts of the world. “Even off the coast of North Carolina, there are changes in the water related to El Niño,” Marchetti says. “Our understanding of how El Niño influences the base of the food web is not just unique to the Galápagos — it translates to the rest of the world.”

Both Marchetti and Gifford hope to return in the spring, during El Niño’s peak, to collect more samples — and, ideally, again in the future to observe the La Niña event, which typically follows an El Niño and results in cooler-than-normal water temperatures around the islands. “We want to learn how it will influence organisms in other parts of the ocean, and how we can use this information to help manage and protect the Galápagos National Park,” Marchetti says.

“We are on the brink,” Gifford says. “We are just at the beginning of understanding these microbes in the environment. It’s such an exciting time for biology. Research like this allows us to look at the incredible biodiversity within the ocean and learn more about the marine microbiome. And, at the same time, we can really understand how those communities are impacting our planet.”

Adrian Marchetti is an assistant professor in the Department of Marine Sciences at UNC-Chapel Hill.

Scott Gifford is an assistant professor in the Department of Marine Sciences at UNC-Chapel Hill and the Sewell Family Foundation Fellow. To contact Gifford or for more information on his research, follow @giffsm on Twitter.

The Galápagos Science Center, located on Isla San Cristobal, is a joint effort between UNC-Chapel Hill and the Universidad San Francisco de Quito in Ecuador. The goal of the center is to promote science and education that will help protect the fragile island ecosystems of the Galápagos and enhance the lives of their inhabitants.