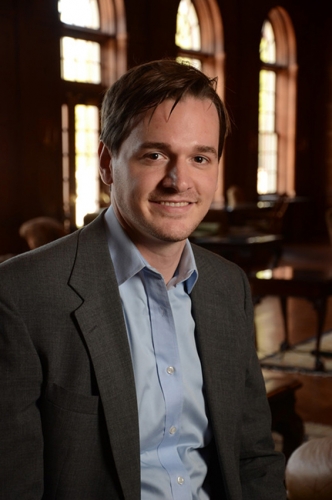 When he was 15 years old, Shaun Hayden raped a young woman. He was charged, tried, convicted, and sentenced to life in prison at the age of 16.

Almost 30 years later, the Supreme Court ruled that a felon convicted as a minor could not be sentenced to mandatory life in prison without a chance of parole. Using that ruling, Hayden filed a complaint in the federal court in the Eastern District of North Carolina. His lawsuit ended up on the desk of Mary Pollard, executive director of North Carolina Prisoner Legal Services.

“After we were appointed to represent Mr. Hayden, we had to learn a whole bunch about parole procedure in North Carolina,” Pollard says. “There’s a wealth of data on parole, but we needed someone with the expertise to dig through it and interpret what it means.”

Enter Bryan Davis, a graduate student in the Department of Statistics and Operations Research at UNC-Chapel Hill.

“It started out pretty open ended—what prisoners get parole and what prisoners don’t? What’s the likelihood of getting parole?” Davis says. “I began the project by trying to define the question really clearly.”

That’s what statistics is all about—bringing clarity to seemingly random sets of numbers. It’s true that there’s an enormous amount of data about prisoners, on everything from their health to the crimes they committed to their behavior while in prison. But how do you make sense of it all?

According to Davis, the first step is to narrow the data to only what’s relevant. So he limited his data set to prisoners who were serving life sentences. The only way to get out of prison, if you have a life sentence, is through parole.

Davis went on to focus on men, and only men who were black or white, because there weren’t enough women or people from other racial groups to get significant results. Eventually he narrowed his focus to about 2,400 prisoners in North Carolina.

Working with lawyers at NC Prisoner Legal Services, Davis came up with a list of factors to include in the model. One major factor when it comes to granting parole is a convict’s behavior while in prison. But how do you put a numerical value on that?

Davis found a way. “There’s a long list of all the disciplinary infractions that occur in prison – it ranges from talking back to kidnapping another prisoner,” he says. “I came up with a system for weighing the seriousness of those infractions— ‘one’ was the least serious and ‘three’ was the most serious.”  He then totaled the weighted infractions for each prisoner, and divided that by the number of years they’d been in prison. The resulting number showed each prisoner’s average behavior over the course of their whole sentence. And Davis gave it a fancy name: the infraction coefficient.

“So that was one measure—basically a measure of how ‘bad’ each prisoner was,” Davis says. The other major factors in his model included age, how long the prisoners had been incarcerated, and what type of crimes they committed.

There was one limitation: he couldn’t take frequency of parole reviews into account. So Davis treated all parole cases as independent events. Some prisoners go up for parole review more frequently than others, he says. “Ideally I would have a snapshot of every prisoner at every parole review to show how their circumstances progressed.”

And what did the outcomes show? The nature of the crime was the most influential factor. According to Davis, prisoners who were serving time for sex crimes were much less likely to get parole than violent offenders. So a prisoner serving time for second-degree murder is much more likely to get parole than a prisoner serving a life sentence for sexually violating a child.

Davis also wanted to examine the role of race in determining parole outcomes. His calculations showed that black men were paroled about 15 percent less frequently than white men, but he couldn’t confirm that race was a statistically significant factor, independent of the other factors like age or type of crime.

Age appeared to have a subtle effect—older prisoners were more likely to be granted parole, regardless of how long they had been in prison. “It’s understandable in the context of their likelihood to reoffend,” Davis says. “Older prisoners are physically weaker so they’re considered less of a threat to society.”

Pollard says she and her team are grateful for Davis’s research. “As lawyers we’re not trained to interpret large quantities of data, so we rely on specialists like him to do it for us,” she says. “He also helps us explain it in court—to juries—in a way that lay people can understand.”

Davis says he’s interested in pursuing a career in data analysis as it relates to criminal justice. He enjoys the social implications of the work. “We need to take a magnifying glass to all the claims we make about the way things are,” he says. “What is good or bad for a community? So many claims are driven by talking heads. We need things to be a little more concrete—we can do that by looking at data.”

Bryan Davis is a graduate student in the Department of Statistics and Operations Research at UNC-Chapel Hill. His research won a 2015 Graduate Education Advancement Board Impact Award for valuable discoveries of direct benefit to North Carolina.