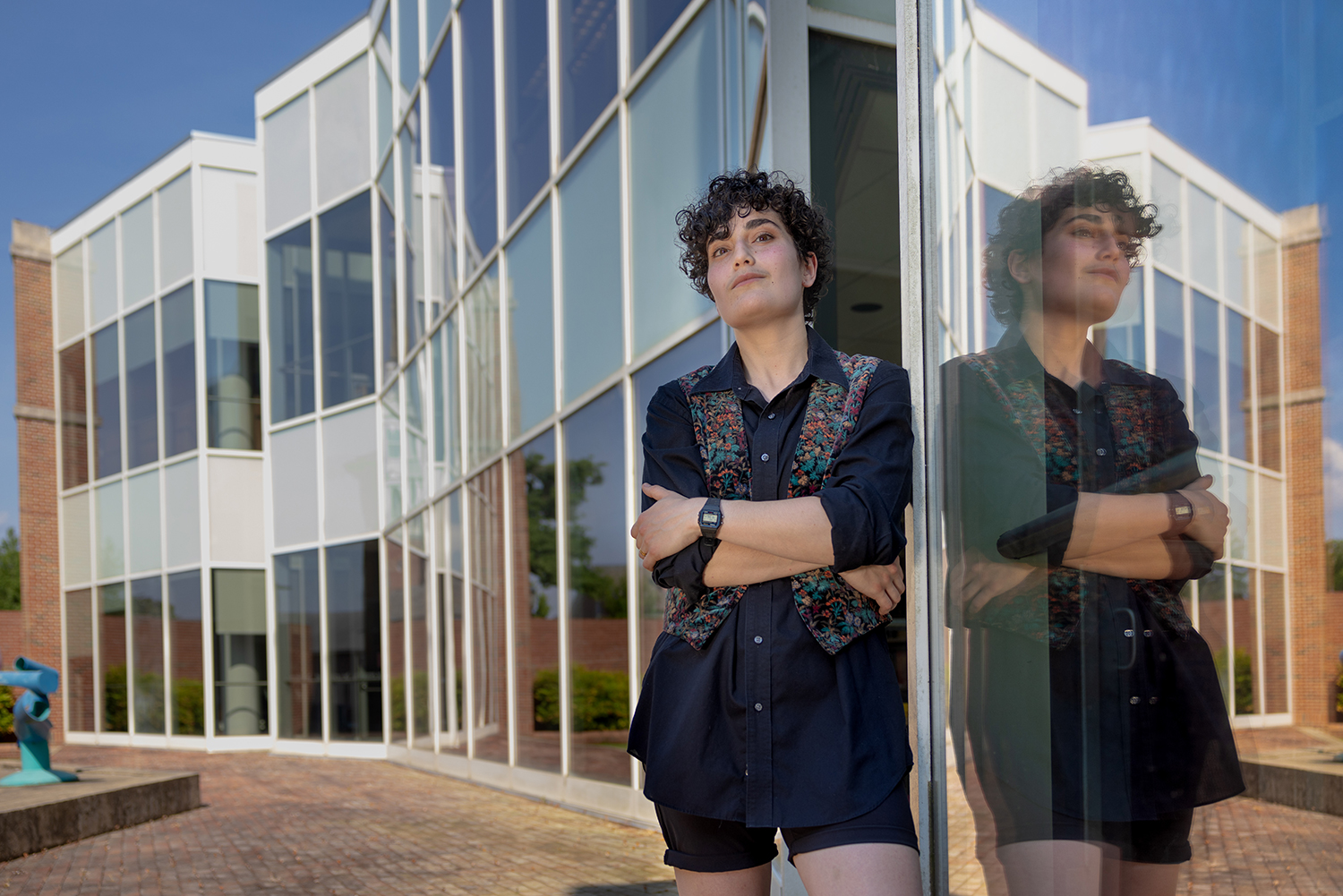 Suad Jabr is a PhD student in the geography department studying the media's portrayal of LGBTQIA+ refugees fleeing the Middle East. (Photo by Andrew Russell)
By Megan Suggs
Society

Suad Jabr is my ideal interview. They’re passionate and discuss topics beyond my initial question. They talk fast, and I try to keep up, writing more questions inspired by their insight.

Jabr is a PhD candidate in UNC-Chapel Hill’s geography department. In Fall 2021, they defended their thesis on the identity of Middle Eastern refugees in the LGBTQIA+ community and how that identity is expressed in legal proceedings, media coverage, and memoirs. The topic makes it easy for me to practice a skill I’m developing: making an interview conversational rather than a stiff Q&A. A typical member of the media, obsessed with my own industry, I’m more than ready to discuss how journalism pigeonholes people into strict categories, even in glowing profiles. 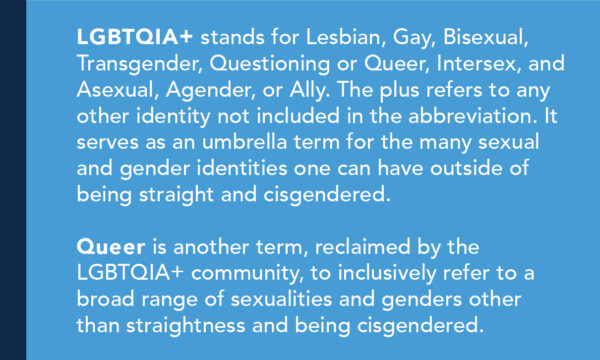 When analyzing profiles in international publications about LGBTQIA+ refugees, Jabr finds the media has one narrative for these subjects: They couldn’t freely express their sexual or gender identity in the Middle East, and the West allowed them to express themselves as they really are. This oversimplifies the queer experience in the Middle East and glorifies the West, which still struggles with cultural and political acceptance of the LGBTQIA+ community.

“I think that script is doing something politically,” Jabr says. “When we think about how truth is being taken up in a political or strategic way, then we can also maybe start to think about who benefits when truth gets used in this way. And when we look at who benefits, what do we learn about the larger system, as well as what it means in people’s everyday lives?”

Some journalists write to justify talking to people for a living. I talk to people so I can write. I struggle with non-talkative subjects and awkward or combative questions. Patting myself on the back for a pleasant interview with Jabr as I prepare to wrap up, I glance through my list of questions one more time. The last two are exactly the kind of questions I don’t want to ask.

Jabr had mentioned that they were queer and the child of refugees. Usually, I wouldn’t ask what country a subject’s parents were from or what their sexual or gender identity was — beyond pronouns. Those are invasive questions reserved for stories about those topics.

I look at the “they/them” pronouns behind their name on the Zoom window and wonder if I have enough information for the article I was already outlining. Maybe I could open the story with a personal experience of theirs and draw parallels to their research. As they finish answering my question about the difference between the fields of geography and political science, I decide to ask.

“The other two questions I had, I just want to make sure that you know you don’t have to answer them, that I just think that they could have some importance because your identity plays such a close role in your research. But if you feel like it’s too private, that’s fine as well,” I hedge.

I realize I’m preparing to do exactly what Jabr has been studying: boiling down two hours’ worth of conversation, a research paper, a defense, and a whole person into the highlights I think are important and interesting, shaping a version of Jabr and their research for audience consumption. I get nervous. Can I get it right?

Ideas from a hair salon

Jabr majored in political science during their first year as an undergraduate at UNC. A friend they met while organizing for the prison abolition movement suggested they take a class in the geography department on modern capitalism. It fulfilled a general education requirement, so Jabr enrolled. They enjoyed how the class analyzed capitalism and its intersections with other political issues.

I’m curious what about geography appealed to them that political science doesn’t have. Jabr explains it comes down to how the disciplines address scale. For example, both may study a topic dealing with populations in different nations. Geography academics can ask how the national boundaries came to be and how they impact findings.

“The class was critical and analytic when it came to what questions were asked about what was happening in the world,” Jabr says. “That way of asking questions really resonated with me.”

When answering my question about what kind of impact they want their research to have, Jabr starts talking about a conversation they overheard when they worked as a receptionist at a hair salon in undergrad. I jot down the time on my voice recording. Anecdotes like this are useful in articles.

A client and stylist were discussing “90-Day Fiancé.” The reality television show profiles couples where one person has travelled from a foreign country to America, using a visa for non-citizen fiancés. The couple has three months to decide if they’ll marry.

“The secret underlying question is: Is the immigrant fiancé just in it for the green card?” Jabr explains. “And that adds a lot to the whole power dynamic of the show.”

The client and hair stylist Jabr overheard were talking about a specific couple, how the female immigrant was just using her potential husband for citizenship and how he didn’t even realize it. What struck Jabr as odd was how the two spoke, as if everything depicted on the show was completely true, though it was impossible to tell what those filming and editing had decided to manipulate or leave out.

“They’re interacting with a piece of media in a way that isn’t analyzing some of the power dynamics that are at play and how this idea of truth — like is the immigrant fiancée in it for the right reason — speaks to this much larger, deeply embedded discourse within immigration policy, as well as everyday spaces,” Jabr says.

Interactions like that inspired Jabr to study how refugees were presented more deeply. Their master’s thesis was separated into three chapters: refugee identity in legal and historic settings, the media’s representation of refugees, and refugees’ representations of themselves in memoirs. Their research consisted of content analyses of the different forms of media.

The second chapter was published in NC State University’s “Mashriq & Mahjar: Journal of Middle East and North African Migration Studies.” I found it while scrolling through Twitter on the hunt for story ideas, in a tweet from Jabr’s adviser in the geography department.

Now, Jabr is continuing their research by talking to people who work with refugees, who are refugees, or who identify as LGBTQIA+. They’re excited to talk with people to see where they agree and disagree with each other. They’ve hopped on Zoom calls to discuss the unique challenges surrounding queer people seeking asylum.

“I’m thinking about the broader ways people are approaching this work, activism or NGO or nonprofit work, compared to how I — some academic person — might be thinking about it,” Jabr says.

With this research, they hope to encourage others to think about media critically, regardless of who they are. They also want to discuss the relationship between truth and identity.

“Truth gets embedded in identity in a way that’s problematic, that assumes people have to narrate their lives under identity, in very specific ways, very consistently in order for it to be seen as truth,” Jabr says.

Identity is a multifaceted, everchanging concept of a person. A thorough profile takes a snapshot of the subject’s identity before it shifts into the next iteration. I enjoy watching my subject, taking note of the way they move their hands. During video calls, I look to see what’s behind someone. The small details help me create a sense of who they are and supplement the big questions. Why do they do what they do? Why is it fulfilling? What are their goals? What have they learned and how has it changed them?

Beyond Jabr’s gender and their parent’s citizenship, several parts of their identity drew them to their research topic. They’re politically active. They want to learn about the politics of immigration and how it impacts the individual, an interest rising from their own political beliefs. Their research is shaped by knowledge gained in course work and extracurricular endeavors, like volunteering in prison abolition movements. All of this, with their heritage and gender, combines to form the drive behind their research.

“Part of coming from my background gives me this feeling of commitment to do research that doesn’t just skim the surface but really digs deeply and thinks very critically about what is happening in our world and why is it happening the way it’s happening,” Jabr says.

I start with the question about where their parents are from. Jabr considers for a long moment before deciding to answer: Palestine and Egypt.

Jabr hesitates again when I ask about their sexual and gender identity, this time because the question is complicated. They list a few identifiers they accept: queer, genderqueer, transgender, and nonbinary.

“Speaking of categories that are always changing,” Jabr says, laughing, “there are multiple conversations to be had about how labels are so arbitrary, and we just pick them and use them how we need to in ways that serve us when culturally appropriate. But also, labels can be helpful to people when it comes to understanding experiences and finding community.”

Suad Jabr is a PhD candidate in the Department of Geography within the UNC College of Arts & Sciences.