Illustration by Corina Cudebec
UNC’s drinking water is pumped from University Lake and Cane Creek Reservoir (step 1) and sent to the Orange Water and Sewer Authority for treatment (step 2). It is then sent to UNC (step 3).
By Alyssa LaFaro
Earth

Rainwater collected from the roofs of UNC-Chapel Hill’s Genome Sciences Building (GSB) drains into a 350,000-gallon, stone-filled cistern below the Bell Tower Amphitheater. This water is used to irrigate Kenan Stadium and flush toilets in the GSB. The FedEx Global Education Center is also double-plumbed — a cost-effective setup featuring two plumbing systems, one that carries drinking water and another that carries non-potable water for flushing and irrigation.

Since 2000, UNC has reduced its total water consumption by 88 million gallons per year — “and that’s while the campus square footage has increased by 62 percent,” Cindy Shea, the university’s director of sustainability, says. The university has accomplished such dramatic reductions in water use by investing in a reclaimed water system, harvesting and reusing rainwater, and using water more efficiently.

A series of bad droughts in the late 1990s and 2000s influenced the university to change its approach. “The droughts were so bad we worried that we might have to send people home from campus,” Shea reflects. “But we can’t close the hospitals and research labs. So we focused on how to make the campus more resilient.” Since then, the drinking water used per square foot has been cut by 60 percent.

Prior to partnering with the Orange Water and Sewer Authority (OWASA) on a reclaimed water system to bring treated wastewater from Mason Farm to campus, UNC used approximately 1 million gallons of drinking-quality cooling water per day during the summer months with air-conditioning at full blast. Today, it uses about 180 million gallons of reclaimed water a year — which saves money and makes more drinking water available to other OWASA customers.

UNC’s drinking water is pumped from University Lake and the Cane Creek Reservoir to OWASA’s treatment plant on Jones Ferry Road. It is then sent to campus. “The less water we use, the less energy is needed for pumping and the fewer chemicals are applied to treat the water,” Shea explains. Near the cistern below the amphitheater, concrete vaults also collect storm water that falls directly on the ground — a process that helps reduce downstream erosion, flooding, and the spread of pollutants into local rivers and streams. 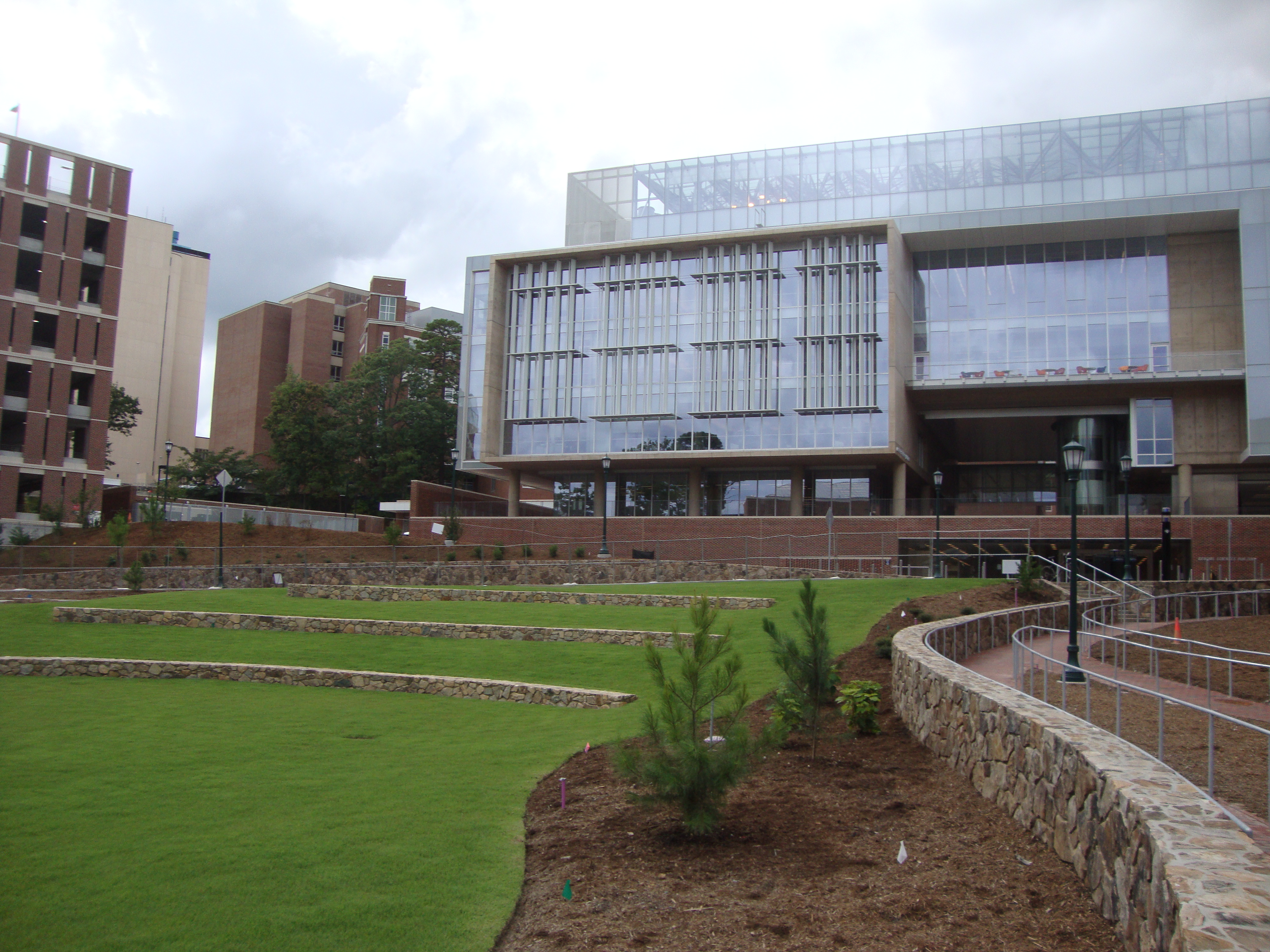 Photo courtesy of UNC Sustainability
Below UNC-Chapel Hill’s Bell Tower Amphitheater rests a 350,000-gallon, stone-filled cistern that collects rainwater. It was installed in 2010 as part of UNC’s effort to cut its water usage.

The third largest coal ash spill in the nation took place in Eden, North Carolina, in 2014 when a Duke Energy pipe ruptured under a pond, releasing 40,000 tons of coal ash and 27 million gallons of contaminated water into the Dan River. Although disasters like this don’t happen every day, rivers and streams are regularly affected by urbanization and other human activities. That’s why UNC and researchers like Larry Band and Jon Duncan from the Institute for the Environment (IE) work hard to improve water quality across the state.

UNC’s efforts have helped lighten the load for Chapel Hill’s waterbodies, but there’s still more to be done statewide. Recognizing this, the North Carolina Department of Environmental Quality (DEQ) reached out to the Nicholas School for the Environment at Duke University in 2014. Duke, in turn, approached Band, IE’s director, and Duncan — a UNC hydrologist — about partnering on the restoration project.

Both schools were asked to come up with new methods to prioritize river basin restoration in North Carolina. While the team at Duke observed fish habitats, Band and Duncan developed screening tools to identify impaired streams and sources of pollution.

When it comes to river restoration, Band and Duncan make it a point to not just observe the river itself but the entire watershed — an area of land that drains to different streams or rivers. “We approach river restoration from a holistic manner,” Band says. “If you’re going to make a change to a river, you have to make the related changes to the watershed for it to maintain its new form.”

In 2006, for example, the DEQ flagged the section of Bolin Creek running from Pathway Drive in Carrboro to Fordham Boulevard because it could not support a healthy variety of insect larvae and fish. To tackle the problem, engineers and city planners studied the entire watershed of the creek, instead of just focusing on the impaired section. They discovered and treated areas of erosion, instability, and other high-risk locations throughout the entire watershed.

Impairments range from biological to chemical. Sometimes the flow is the problem — too high and erosive, or too low and dry. Or the river may have an overabundance of nutrients like nitrogen and phosphorous, which can cause freshwater algae blooms that produce dangerous toxins. Others, like Bolin Creek, may not be able to support animal habitats. “And some rivers are so impaired that it may be simply too prohibitive to try to return them back to a healthy system,” Band says.

For their project with the state, Band and Duncan utilized detailed data from SPARROW — a water quality model from the U.S. Geologic Survey that tracks the movement of nutrients throughout a watershed. Another model called StreamStats provided information on streamflow, particularly the size of floods. “These provide insight into all of the pieces of the watershed that need to be understood to achieve the best outcomes,” Duncan says.

“This data is advancing the state’s ability to really understand where the hotspots are within the river networks — and where the treatment really needs to be allocated to,” Band adds. “We’re not stating what treatment needs to be done, just location and the types of functions that need to be restored.” Those functions include improving the ability of the land to infiltrate water, revegetating the surface, and reducing pollution like nitrogen fertilizer and human sewage at the source.

The data analysis on rivers translates to future research throughout the state — Duncan is working on funding for a similar project within seven counties along North Carolina’s coast. He will model how farms manage and prevent fertilizers from draining into nearby waterbodies or groundwater.

Water is one pillar of Carolina’s upcoming Triple Zero Initiative, which kicks off this September. “We want to not only be in balance with the local hydrologic cycle,” explains Shea, “but we also want to be climate-neutral — meaning zero greenhouse gas emissions — and move toward zero waste, diverting as much as possible away from the landfill.”

Band and Duncan strive to achieve something similar at the state level. “We want to help design and maintain landscapes that are as close as possible to being carbon-, water,- and nutrient-neutral,” Band says. “That holistic watershed approach is our unifying vision.”

Cindy Shea launched UNC-Chapel Hill’s Sustainability Office in April 2001. She is a Leadership in Energy and Environmental Design (LEED) AP, a credential that signifies her advanced knowledge in green building as well as expertise in the LEED rating systems.

Larry Band is the director of the Institute for the Environment, the Voit Gilmore Distinguished Professor of Geography, and a visiting professor at the Institute for Geography at the Chinese Academy of Science. He became a fellow of the Geological Society of America in 2014 and of the American Geophysical Union in 2015.

Jon Duncan is a research assistant professor in the Institute for the Environment.