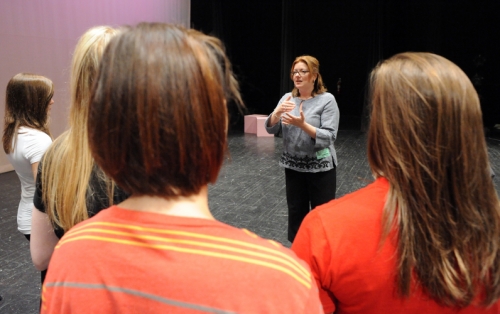 Gabrielle McHarg grew up on the stage. She began performing in local theatre at the age of 8 and never stopped.

“By the time I graduated, I had spent more years of my life in theater than I hadn’t,” McHarg says. “I often talk about memories from my childhood not based on what grade I was in, but rather what show we were doing.”

In 2012, when McHarg enrolled at UNC-Chapel Hill with a major in psychology and minor in music, she assumed that the curtains had closed on her theatre days.

“I began to notice how much my theatre experience was benefiting me in college,” she says. “I had learned about times tables and the preamble in ‘School House Rock,’ Hoovervilles and U.S. history in ‘Annie,’ Jewish culture in ‘Fiddler on the Roof,’ and racism and segregation in ‘Hairspray.’”

This revelation sparked McHarg’s interest in researching theatre’s role in education. So in the spring of 2015, she applied for UNC’s Summer Undergraduate Research Fellowship Award (SURF), a program designed to enhance the educational experience of undergraduates by engaging them in research opportunities.

Reflecting on her own experience, McHarg developed a research question: Do theatre programs help young students with reading? So, for her research project, she looked to Wilson, North Carolina’s summer theatre programs — some of which she’d participated in as a kid. “I remember spending six weeks sitting in one story, trying to figure out the ins and outs,” she says.

She asked a selection of first-, second-, and third-grade students, both involved and not involved in the theatre programs, to participate in her study. She tested for reading comprehension by having the students read aloud, and also instructed them to create a story from a selection of pictures.

“Oftentimes, when I would go to do assessments, kids would act like what was going on was very important,” McHarg recalls. “One little girl told her grandma, ‘I cannot be late for my very important job!’” Many of the students enjoyed being in the study, potentially because of the individual attention “their teacher lady” gave them.

McHarg developed a set of prompting questions as a consistent measure for each type of testing. For example, if the students read a sentence like, “Where is Joe?” McHarg rated their responses using criteria such as: Did they read it like a question or a quotation? Did they use different voices for different characters?

She administered a baseline test and followed up every two to three weeks to measure progress. Tests were scored via video recording after each session — and the results were surprising.

“The drama program showed to have a positive effect on storytelling,” McHarg says. “The students would make up elaborate back stories that included everything from hiding out in caves to needing to find lost pets to using magic crayons.”

But for flow, structure, and reading comprehension there was no overwhelming impact. McHarg did, however, notice subtle differences in the responses of the students. For example, the drama students remembered different specifics about the stories they read compared to the students who did not participate in theatre performances.

The responses for the third test were also striking. McHarg found that students involved in the drama programs read more quickly than those who were not, but this did not necessarily lead to increased reading comprehension. “The reading comprehension was actually lower in those children who read quicker,” she says. “Overall, the scores were higher in the kids who participated in theatre — just not significantly.”

“What we have learned is that we need to learn more,” Barbara Goldman, a senior scientist at the Frank Porter Graham Child Development Institute, says. All SURF projects must be overseen by a faculty advisor or mentor. Having spent a lot of time in Goldman’s lab, McHarg felt she’d be the best choice. “And I said ‘yes’ because I had fantastic experiences with Gabrielle in my lab,” Goldman says.

While McHarg’s research was all her own, Goldman provided help along the way. She served as a sounding board for McHarg throughout the process, and even connected her to more relevant faculty members when necessary.

Although, McHarg didn’t need much help. “She is very, very competent and works really well on her own,” Goldman says. “She did not need a lot more than what I was able to provide.”

But that is indicative of SURF. Undergraduate students must have good academic standing to apply to this competitive and respectable program. Once accepted, they are expected to spend a minimum of 20 hours per week, for nine weeks, engaging in research. The Office of Undergraduate Research selects only 60 students — each of which receives a $3,000 award to pursue their studies — every year for the program.

To Goldman, this opportunity is invaluable. “They get their hands dirty in their own research and get to see how that feels,” she says. “You don’t remember the content of the test you took in college — you remember the projects you did.”

And for McHarg, the case stands. After her project ended, she spent a lot of time reading about the research of others in this area, and has become a proponent for theatre in the classroom. “Reading out loud is often hard for kids because they are afraid of messing up,” McHarg says. “So if they take on a character, it may become easier for them.”

McHarg believes that acting and reading plays should be a part of all curriculum. She has observed how theatre exchanges anxiety for excitement in students learning to read. In a perfect world, she sees theatre playing an active role in every classroom.

“There is a lot of research that shows how it helps kids,” McHarg says. “Now, my research is a small part of that, which is really exciting.”

Gabrielle McHarg is a senior at UNC-Chapel Hill studying psychology and music. She also serves as a work study student for the Frank Porter Graham Child Development Institute (FPG).

Barbara Goldman is a senior scientist at the Frank Porter Graham Child Development Institute and the director of the Behavioral Measurement Core and Audio-Visual Resource Center.

SURF offers more than $3,000 to students pursuing research, scholarship, or performance with the guidance of a faculty advisor.