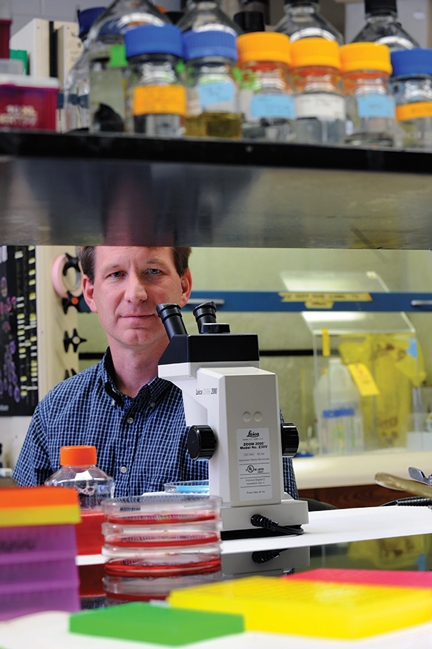 It started with a fear of planes.

“I don’t like to fly, so I’m a master at distracting myself,” says UNC cancer researcher Ned Sharpless. He was about to head from North Carolina to California, and he needed to prep for the transcontinental flight.

Sharpless started dreaming up a real-world version of the sci-fi drug. That has led to a technique to protect cells not just against radioactive attack, but from the far more common assault of cancer chemotherapy. Today, Sharpless’s company G1 Therapeutics has attracted $33 million in new investments to bring the treatment to cancer patients and test other drugs for cancer.

There are two ways you could combat radiation damage, Sharpless thought after that day on the plane. One way would be to make a drug that stops radiated cells from dying. He figured that would be a bad idea, because if you keep damaged cells alive, they could turn into cancer.

The other option would be to help the damaged cells repair themselves, or prevent the damage in the first place. “One trick to do that is to change where the cell is in the cell cycle, because the cycle has a profound effect on the cell’s ability to repair damage,” Sharpless says. In the life cycle of a cell, it rests, copies its DNA, rests some more, and then divides. Cells in the first resting phase, called G1, are less vulnerable than cells that are preparing to divide.

So his team’s goal became to pause healthy cells in G1, to protect people from radiation damage from a nuclear attack—or from the similarly toxic effects of chemotherapy. “Some of the best cancer drugs are still these terrible, noxious, DNA-damaging molecules discovered 50 years ago,” Sharpless says. “They are really good drugs that cure cancer when nothing else will.”

The team got the opportunity to test the idea when it was a studying a compound that blocks two enzymes, CDK 4 and 6. Drug companies were interesting in using these enzymes to stop cancer cells from dividing and multiplying, but Sharpless wondered whether they could also protect healthy cells by pausing them in the resting phase. In 2007, Sharpless’s team found that the compound protected the bone marrow of mice from radiation toxicity. In effect, it stopped the damage that, in a human receiving chemotherapy, leads to infections, anemia, and bleeding.

There’s a long road from a study result to an FDA-approved treatment—one that Sharpless almost didn’t start down. He was a researcher and a clinician, not an entrepreneur. But a Harvard colleague who was part of the research, Kwok Wong, convinced Sharpless they should start a company to move their work along to a real drug that could be used in conjunction with chemotherapy.

G1 Therapeutics, begun with a grant from the Carolina KickStart program, arrived in Research Triangle Park in 2008, just at the right moment to provide work for good scientists laid off in the economic downturn. The company worked with several scientists to make a strong CDK 4/6 inhibitor called G1T28.

The first phase of G1T28 testing, on healthy subjects, showed that the drug is nontoxic and does what it’s designed to do—pause bone-marrow cells in G1 when you give the drug through an IV. After the drug dissipates from the blood, the cells start dividing normally again.

Now, the company has announced that it attracted $33 million in new venture capital, a step that will allow it to start more clinical trials in 2015. Lung-cancer and breast-cancer patients receiving chemo will get the drug to see if it protects their marrow. By sometime in 2016, Sharpless thinks, we’ll know how well it worked.

G1 Therapeutics employs 11 people full-time at its headquarters in Research Triangle Park, and outsources more work to RTP contract research organizations. In the next phases of clinical trials and research into the tumor-suppressing abilities of CDK 4/6 inhibitors, G1 will likely expand its payroll.

“Most patients with cancer eventually get cytotoxic chemotherapy, so the need for this kind of treatment is still going to be high,” Sharpless says.

Ned Sharpless is the Wellcome Distinguished Professor in Cancer Research in the UNC School of Medicine and director of the UNC Lineberger Comprehensive Cancer Center. His initial work on CDK 4/6 inhibitors was supported by the University Cancer Research Fund, an investment by the N.C. General Assembly to fund innovative research to detect, treat, and prevent cancer.

Sharpless started G1 Therapeutics with Kwok-Kin Wong, a Harvard Medical School researcher. They began the company with a grant from the N.C. Translational and Clinical Sciences Program’s Carolina KickStart program, developed to provide support for UNC faculty in commercializing biomedical technologies through startup generation. The company was funded by the National Institutes of Health, the N.C. Biotechnology Center, and venture capital.