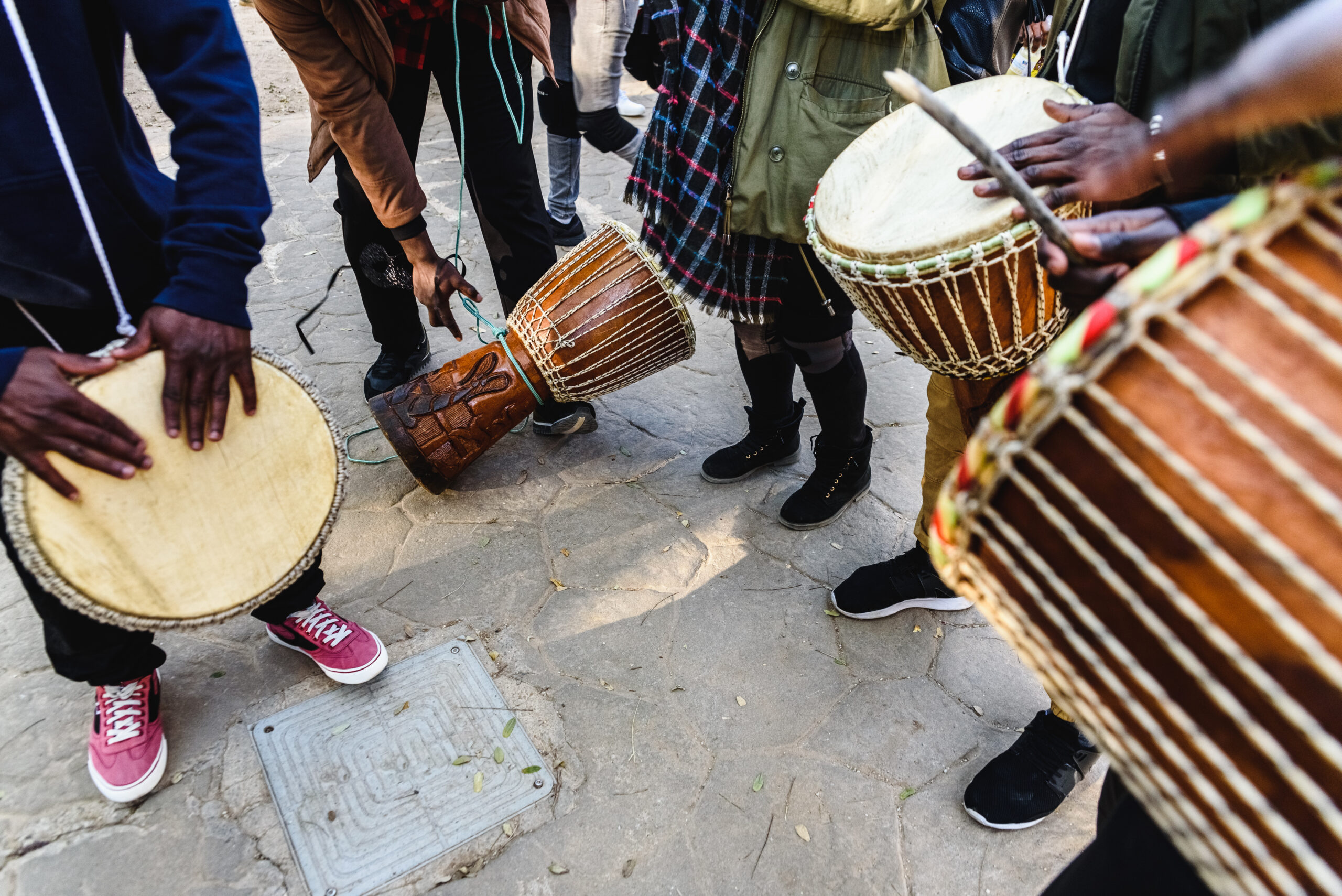 Drums play a large role in African music, and drum circles can now be found across the nation. But these sounds are, sometimes, perceived as "noise," according to UNC researcher Petal Samuel, who has been studying Afro-Caribbean culture since her undergraduate degree.
By Emily Davis
Society

Every Saturday since 1969, a drum circle of African, African American, and African Caribbean musicians has gathered in a Harlem park in New York City. In 2008, following the construction of a nearby luxury co-op, the musicians began to receive regular noise complaints from the predominately white, affluent residents — and increasingly hostile visits by police.

The conflict was eventually resolved, and the drum circle was allowed to continue their tradition in a different area of the park. Black music and sound are uniquely perceived and prejudiced as noise, according to Petal Samuel, a professor in the Department of African, African American, and Diaspora Studies. She believes that the criminalization of noise tends to target these communities.

Samuel’s own family comes from Saint Lucia, a country in the eastern Caribbean Sea. She was born in New York City, in the neighborhood of Flatbush, where nearly 50 percent of residents are foreign-born, particularly in the Caribbean.

Naturally, Samuel grew up surrounded by Afro-Caribbean culture: the art, the dialects, the food — and the sound. Steel and conga drums, and globally celebrated genres like reggae, salsa, and reggaetón, find their roots in this culture, which was shaped by the music of African slaves and their Caribbean descendants.

The diverse sounds of Caribbean music and celebration, both within the region and among immigrant communities, remain inextricably linked to a painful past. It’s these complex racial identities and codes surrounding Black sound — their origins and consequences — that Samuel now studies.

When Samuel began her research on the racial politics of sound in graduate school, she had a lifetime of her own experiences to draw upon. From an early age, she was made aware of the sound and volume of her voice, and how it would be interpreted by the world because of her racial and gender identities.

Samuel’s systematic study of these issues began in works by the female, Afro-Caribbean writers she discovered in college. She was fascinated by people like Michelle Cliff and Paule Marshall, who reconceptualized noise as something that could liberate rather than something that disturbs or stigmatizes.

Samuel learned about Caribbean literature and thought at an early age. Huge posters of William Arthur Lewis, a renowned economist, and Derek Walcott, a poet and playwright, hung on the walls of her family home. Both men were Nobel Laureates, and both hailed from Saint Lucia. While she was aware the Caribbean had a rich literary tradition, it played no role in her K-12 education, where Caribbean literature — let alone Black literature — was nonexistent within the curriculum.

It wasn’t until she went to college at the University of Pennsylvania that she took her first African American and Caribbean literature courses. With the help of her professors, she navigated these transformative experiences into a career.

Samuel’s current research traces the criminalization and suppression of Black sound in the colonial era all the way to modern-day Caribbean and Caribbean diaspora communities, where policing of sound continues to be a subtle tactic of racial surveillance and control. Increased noise complaints, according to Samuel, often signal the early stages of gentrification in neighborhoods with minority communities, accelerating the exclusion of longtime residents by increasing police presence and making residents feel more surveilled.

Samuel studies this topic using literature and archival materials like newspaper articles and colonial correspondences. These sources demonstrate real-world battles over soundscapes that have played out throughout history.

In 1934, the Inspector General of Kingston, Jamaica, penned a letter to the colonial secretary of Great Britain. He described how noisy Kingston had become and the “lower orders” from which the sound emanated. Far beyond a banal complaint, the letter demanded that the colonial secretary strengthen laws to prohibit noise in the city.

When Samuel discovered this letter during an archival research trip to Jamaica, she quickly recognized its significance. Such complaints were not simply about volume, but indirect indictments of the Afro-Caribbean people who created that clamor. This discovery, in addition to other letters, articles, and opinion pieces, proved to be a turning point in her research.

The din of history

While race is often discerned visually, according to Samuel, her field of study looks at how society infuses sound with racial codes. In the early 1800s, British colonial authorities in Jamaica were constantly at war with Maroons, the formerly enslaved people who had escaped to the country’s mountains and formed free societies.

The Maroons, Samuel says, communicated military instructions and information using drums and horns — a major destabilizing threat to colonial rule. Their influence on colonial policy can be found in Jamaica’s 1816 slave code laws prohibiting noise. Slaves could not gather after a certain hour. They could not play certain instruments, like drums or horns, or make certain sounds.

“What’s encoded, sometimes subtly and sometimes overtly, in the language of the law is that the colonial authorities and planters were fearing that certain kinds of sounds could either signal or induce slave rebellions,” Samuel explains. In 1739, a slave rebellion led to the banning of drums and horns, a law written into the 1740 slave code of South Carolina.

The stigmas from these bans persisted in the way society considered noise and volume long after slavery was abolished and can be found today in anti-noise public discourse that disproportionately targets minority communities. In modern-day Caribbean nations like Jamaica and Barbados, where tourism feeds the economy, there are persistent anxieties over the noisiness of island populations, such as the loud music of dancehalls. Some of these anxieties surrounding the perception of islanders and characterizations of “uncivilized” noise, according to Samuel, are holdovers from colonial rule.

“They are constantly being made to feel as though they have to live up to these Western standards of civilization,” she explains.

But such concerns, like the positions of minority and low-income communities near loud airports, are given less attention in public discourse than the noise control efforts that stigmatize Black communities, Samuel says.

Samuel’s research has changed the way she thinks about the objectivity of her own senses.

“You think of the senses as objective,” she says. “That what you see is what you see. And what you hear is what you hear. Volume is volume.” But Samuel noticed that noise complaints about drumming and Black music genres were treated differently. She remembers, for example, coming across an article praising a London Tube station’s creative use of classical music to deter crime.

In T.V. and film, Samuel points out, hip-hop music is often played in scenes with elicit or dangerous activity. This typecasting of Black sound as threatening can have real-world implications, like whether people decide to call the police over specific sounds. Samuel recalls the case of Florida teen Jordan Davis, who was shot and killed at a gas station following an argument with the shooter over how loudly Davis was playing hip-hop music in his car. The shooter claimed he felt he was in danger.

It’s cases like these which, according to Samuel, show how the human senses are not purely sensorial, but instead function with preconceived biases and prejudices. Even voices, such as her own, are perceived by the world in racial terms.

“If we think we know what a Black person sounds like, versus what a white person sounds like, then when we hear a loud voice that we’ve attached one kind of racial code to, we’re not just being disrupted because of decibel measures, but because of our racialized presumptions about who belongs in a space and who doesn’t.”

Petal Samuel is an assistant professor in the Department of African, African American, and Diaspora Studies in the UNC College of Arts & Sciences.