Sometimes a single word acts as a powerful tool for communicating a whole world of knowledge. The Portuguese word saudade, for example, evokes a deep melancholic yearning for something or someone we’ve lost — but the short, three-syllable word encompasses more than that. The seafaring nation of Portugal has a long, storied history of loved ones setting sail across the ocean, never to return. Saudade refers to the entire country’s collective sense of loss, and remains fundamental to Portugal’s cultural identity today, representing the thoughts of millions of people over hundreds of years.

Something similar happens in science and mathematics. Scientific notation, for example, is a method for expressing numbers that are either too large or too small. The notation for 1 billion becomes 1.0 x 109.

Computers help with this problem, too.

But even with all our advances in technology, some numbers remain too astronomical. Physics researchers, in particular, struggle to delve deeper into the inner workings of the universe because the calculations of such things become too large to handle. UNC theoretical physicist Joaquín Drut focuses on developing new methods for calculating those numbers.

“To do these calculations, you either need computers with huge amounts of memory, or you need huge amounts of statistics,” he explains. “And since there’s no computer large enough to solve these problems, we turn to statistical methods.”

Exploring the universe, one equation at a time

Equations have helped humans understand how the universe works for centuries. Today, high school students learn about Newton’s second law of motion, which states that force = mass X acceleration (f = ma). Without it, we wouldn’t be able to comprehend how fast the moon orbits the earth or the speed at which the earth moves around the sun. And you can’t forget Einstein’s famous mass-energy equivalence — energy = mass X the speed of light squared (E = mc2) — which helps explain how elementary particles interact and decay.

But the smaller the particles, the more complex the laws of physics become. “Newton’s laws no longer apply once you reach the inside of an atom,” Drut explains. “Protons, neutrons, electrons — those are all governed by quantum mechanics.”

Quantum mechanics is the science of how matter and light behave at microscopic levels. “Early on, when quantum theory was developed, it was impossible to predict its applications such as micro-electronics, transistors, and lasers,” Drut points out. Try to imagine a life without lasers: no cataract or Lasik eye surgery, no welding or laser cutters, no barcode scanners or CD players, no fiber optic cables or sensors, no advanced microscopes or telescopes.

But the current body of knowledge on quantum mechanics is limited. “We understand the laws that govern individual atoms, but how do we go beyond that? How can we understand how atoms behave in large groups?” Drut asks. The answer lies in complex equations. Computers have transported us into the universe, helping with advanced calculations that enable us to understand things like quarks and gluons — elementary particles that form protons and neutrons. But they haven’t gotten us quite far enough.

“As you move further and further inside a star, matter gets really dense,” Drut says. “And what you’ll find there is quark soup — no one knows how that matter is going to behave. Actually, it remains one of the key questions of astrophysics. Where and how have most of the elements on the periodic table formed?”

Drut focuses on developing new equations and methods to better understand these processes.

The average person understands the world through language — not numbers. So uncovering how the universe functions can get a little tricky, especially when lots of particles are involved. And the smaller the particles, the harder it is to understand them. From the inside of an atom to the vast frontier of space, scientists encounter these universal struggles. They call them “many-body problems.”

Imagine an electron moving freely in an empty space. It’s easy to observe when nothing is affecting it because its energy and momentum remain constant. But throw a proton into the mix — and things get significantly more complicated. The two particles become “bound” to form a hydrogen atom. Although difficult, this “two-body” problem remains solvable. Physics students learn how to do so on paper in advanced college courses or in graduate school.

When other particles come into play, though — like a proton, a neutron, and another electron — the mathematics becomes so involved that only a modern computer can solve the problem. As more and more particles interact, these calculations continue to grow in complexity.

“Loosely speaking, the main reason quantum problems are so challenging is that quantum mechanics contains much more information than Newtonian mechanics,” Drut says. Imagine a sentence that is so lengthy it takes an entire lifetime to speak it out loud. That’s exactly what happens here: There’s too much to say and not enough time to say it.

Drut points to dating websites as another example. “You can’t go on a date with every single person you come across,” he says. “It’s impossible. So how can you figure out which combination is the right one? That’s exactly what dating websites do — they apply an algorithm to match two people together.”

In some of the more challenging problems, physicists attempt something similar. Since they can’t test all the possibilities, they focus on developing new ways to optimize the calculation for what they want to compute. “Quantum mechanics is so rich that even if you had access to all the information, you wouldn’t be able to store it anyway,” Drut points out. “So you have to ‘ask specific questions,’ as we often say in the field.” 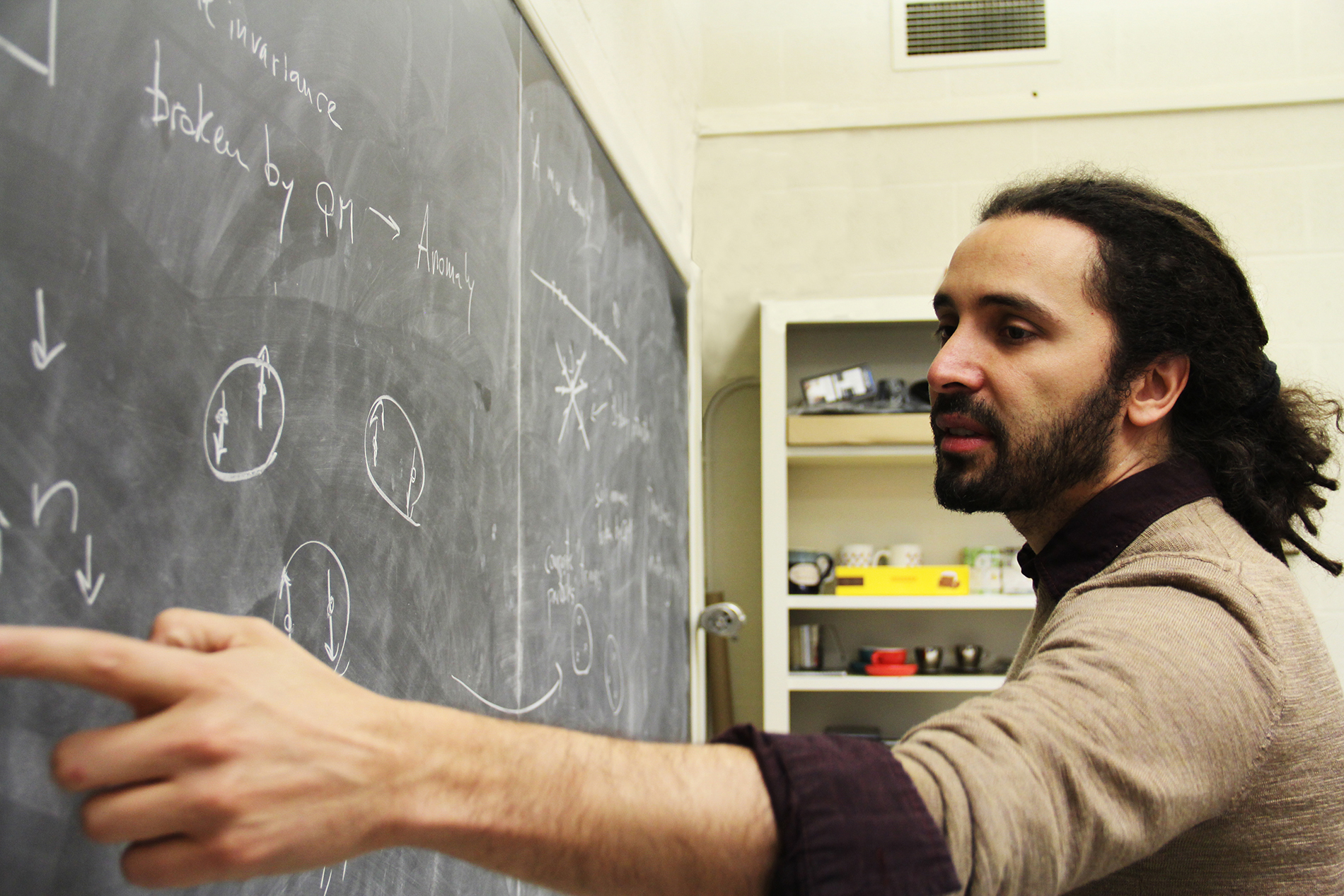 “We’re in-between a very advanced and primitive age,” Drut points out. “We have amazing computational power, but our knowledge is still limited. We need to go further.”

Using what we know

Drut and his research team are constantly exploring alternative methods to evaluate the properties of many-body systems. This process always begins via thought — they reflect on the underlying processes and mechanisms of the problem at hand. Sometimes, this leads to further study of a pre-existing equation that has applications no one else ever discovered. But when that’s not an option, they create new ones.

Theoretical physicists do this through experimentation — but not in the traditional sense. “The process of developing new theories and methods is often a bit of a random walk,” Drut admits. They calculate what they know, things like force and energy and momentum, and when they begin to veer off the beaten path, they develop a hypothesis.

“For example,” Drut begins, “you may be trying to calculate something in the ‘usual’ way — whatever that is — and find out that it fails. So then you have to disassemble the calculation as if it were an engine or an electronic device.”

Then, they develop an equation to tackle a specific problem, and test it through comparisons with existing formulas such as the Schrödinger equation — a mathematical calculation that describes the changes that happen over time within a many-body system. It’s like the more advanced brother of Newton’s second law, which predicts the path a system will travel along.

In a recent calculation for quantum entanglement, Drut and his students hit a roadblock. Someone had written — to great acclaim — a method that simply didn’t work. “It was very frustrating because it used, essentially, all the techniques we knew and fit together well on paper,” he explains. “But when we told the computer ‘go,’ it would only work in the simplest cases and failed everywhere else. The calculation just put out a bunch of noise that looked like an earthquake had hit it. And we were left scratching our heads.”

So they stripped the formula apart, reassembling it several times in the process. Eventually, they figured it out. “We used an old trick that involved doing a bunch of ‘small’ calculations with no noise trouble, and then put it all together afterward. And it worked!”

Once he thinks he’s developed a successful equation, Drut will sometimes collaborate with experimental physicists to see if it will actually work when applied. To do this, they utilize ultracold atoms — atoms that are so cold they are neither gas, nor liquid, nor solid. This causes them to behave more like a uniform wave rather than individual particles. And the slower these particles move, the easier they are to observe. The result of such experiments may point to the accuracy of a new theory.

“But then, at some point, you just leap,” Drut says. “You’ve tested something enough and it agrees with this and that. It doesn’t mean we understand all the consequences of the theory, but we have intuition about the general dynamics of the problem.”

Mining for the answers

“The universe is like a massive mountain and we have to dig in — but in fundamental science research, we don’t always know what we’re mining because what comes out may be completely unexpected. Either way, we want to find it before anyone else,” Drut says. This sense of urgency is attributed to immediate applications in the fields of computing and cryptography — both of which impact defense and national security. But fundamental science research, alone, is a race, according to Drut.

“Whatever positive thing may come from knowing more about nature — you want that to materialize sooner rather than later,” he says. In the field of quantum mechanics, for example, understanding the properties of gases undergoing relatively simple interactions can become impossible. “We can find approximations, we can come up with ways to begin to approach the problem with computers, but by far the most interesting cases are out of reach.

“That may sound like an esoteric problem,” Drut adds. “Who cares about quantum particles? But it turns out that the problem affects multiple areas in physics from materials science (predicting the properties of materials) to high-energy physics (predicting the behavior of matter in extreme conditions).”

Solving these problems could result in a more eco-friendly way to store and transmit energy, increased knowledge of biological structures and processes, and the ability to create revolutionary materials with unprecedented strength and elasticity.

When Einstein developed general relativity in 1915, for example, no one knew it would be needed for things like GPS technology today. The possibilities are endless.

Learning to speak the language

Drut’s research is so difficult because it resides in-between the worlds of physics and applied math. Pure physicists with standard training will struggle to solve these problems, he says. And the same holds true for applied mathematicians lacking a solid grasp on physics.

“These are the hardest types of problems — the ones that are truly in-between different areas,” Drut says. “I think that’s one of the reasons why they take so long to solve. You need to understand two bodies of knowledge to do it.”

That means years of training to understand the world of quantum mechanics — and that’s why Drut hopes to further educate students in both applied math and physics.

“People walk away from math,” he says. “Math is, at some level, more important than language. Extraterrestrials will speak math. They will not speak native languages like English or Spanish.

“Who knows how they would communicate with each other, really?” Drut continues. “But we do know the laws of nature are the same for them as they are for us — the same quantum mechanics, the same electromagnetism, the same relativity. And those are written in the language of mathematics.”

Joaquín Drut is an assistant professor and Melchor Fellow in the Department of Physics and Astronomy within the UNC College of Arts & Sciences.