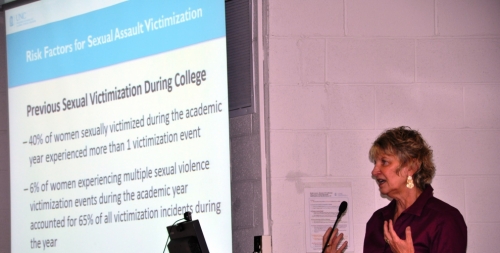 In January 2015, college students flocked to campus showings of “The Hunting Ground.” While dozens of universities appear in the film, it has a clear focus. As images of UNC-Chapel Hill’s Wilson Library, Polk Place, and Bell Tower flash across the screen during the two-minute trailer, alumna Annie Clark says: “The first few weeks I made some of my best friends, but two of us were sexually assaulted before classes even started.”

Clark and fellow alumna Andrea Pino were heavily featured in the documentary, which shined a light on the issue of college sexual assault. The Sundance Film Festival marked the two “among a growing, unstoppable network of young women who will no longer be silent.” College sexual assault, though, is just one type of gender-based violence, a topic that has received increased attention both domestically and internationally in recent years.

As activism and awareness for gender-based violence have increased — broadly and at UNC — so has the push for research on the topic. Stephanie DeLong, a PhD student in the Department of Epidemiology, is just one of a number of students focused on this type of research at Carolina. She, specifically, examines partner violence among adolescents in northeastern South Africa.

DeLong quickly learned she wasn’t the only student on campus who saw a need to bring different types of gender-based violence research together. She partnered with fellow epidemiology student Aliza Gellman-Chomsky and Marta Mulawa from the Department of Health Behavior. They discussed the value of increasing collaborations across departments. “There were a lot of people doing this work, but we were scattered all over campus,” she says.

To bring this research together, the trio sent out a series of emails to multiple departments within Gillings to gage interest in the project. Three years later, those emails and enthusiasm have blossomed into a more formal collaboration involving students, faculty, practitioners, and other researchers from UNC’s Gillings School of Global Public Health, School of Medicine, School of Social Work, Student Wellness, and Carolina Women’s Center.

Steve Marshall, the director of the UNC Injury Prevention Research Center, will kick off the event with opening remarks. The center co-sponsored GBVRG’s first summit and will act as a partner again this year. “Gender-based violence is a big, complex social issue,” Marshall says. “If we are going to have an impact on it, we need interdisciplinary research that gets to the root cause.”

Marshall has been on board with GBVRG’s work since day one. He was initially drawn to the group because of its extraordinary network within different departments. “The faculty members are so busy that we don’t always step back and look at the big picture,” Marshall says. “Sometimes our students see the linkages between these topics better than we do!”

Sandra Martin, the associate dean for research in Gillings, knows this better than anyone. Last year, a survey from GBVRG spurred the researcher to reinvent one of her past courses. Years ago, when she first started lecturing at UNC, Martin taught “Violence Against Women” and then “Research Methods.” She put both courses on the back burner to focus on her research on violence against children and women.

In 2014, though, Martin began receiving email inquiries from students about gender-based violence courses. She knew she couldn’t fill a classroom with the few students reaching out to her via email, but she wondered if more students were interested. Luckily, GBVRG sent out another email to see what kind of courses public health students wanted to take. “They came to me and told me that students wanted to take my class,” Martin says, “which was great because I wanted to teach it again!”

Last fall, Martin taught a class called “Gender-Based Violence.” To create the curriculum, she combined research from her past courses with new studies on men and transgender people. “It really tries to incorporate the latest research and topics into the class,” Martin says. “Classes should change as the knowledge base grows.”

The course is restricted to graduate students and meets once a week for three hours. During the first half of the class, Martin typically invites guest speakers to give presentations. Students then have the opportunity to network with the speakers, which sometimes leads to collaborations on projects. These kinds of relationships are extremely important in the field of gender-based violence, according to Martin.

She believes that her course and the work of GBVRG lay the foundation for the future. “It is more than just a class or a summit,” Martin says. “These individuals are the next generation of researchers that will go on to end gender-based violence.”

Stephanie DeLong is a PhD student in the Department of Epidemiology in the UNC Gillings School of Global Public Health. She is also a founder and one of the student leaders in the UNC Gender-Based Violence Research Group.

Steve Marshall is the director of the UNC Injury Prevention Research Center. He is also a professor in the Department of Epidemiology in the UNC Gillings School of Global Public Health.

Sandra Martin is the associate dean for research in the UNC Gillings School of Global Public Health. She is also a professor and associate chair for research in the Department of Maternal and Child Health. Last year, she helped coordinate the AAU Campus Climate Survey on Sexual Assault and Misconduct at UNC-Chapel Hill.