By Megan May
Health | Video

Thirteen years ago, research fellow Scott Commins and colleagues at the University of Virginia were attempting to solve an unusual conundrum. People were reporting late-night symptoms ranging from hives to shortness of breath and gastrointestinal issues. The reactions were eventually linked to an allergy to alpha-gal, a molecular sugar found in red meat. Many of the affected reported eating mammalian meat their whole lives without problems. So, why the sudden change?

It wasn’t until some of Commins’ peers also began having reactions — one even needing a trip to the hospital due to anaphylactic shock — that the picture became more clear. Like detectives trying to piece together a case, the researchers sought commonalities among the allergy “victims.” Their answer was surprising: All spent lots of time outdoors.

The team to ask patients if they had a history of tick bites. The answer was a resounding yes.

Now an associate professor in the UNC School of Medicine, Commins continues to piece together this mystery.

A study from the Centers for Disease Control and Prevention (CDC) estimates about 34,000 people nationwide have alpha-gal syndrome (AGS). Development of the allergy is strongly linked to the lone star tick in the U.S., and other species of ticks worldwide. Easily identified by a white dot on the back of females, the lone star tick is an aggressive species. Mostly found throughout the eastern U.S., particularly in the South, the tick has become invasive to other regions of the country. While scientists are confident that AGS is acquired through tick bites, the actual way in which it develops is unclear. 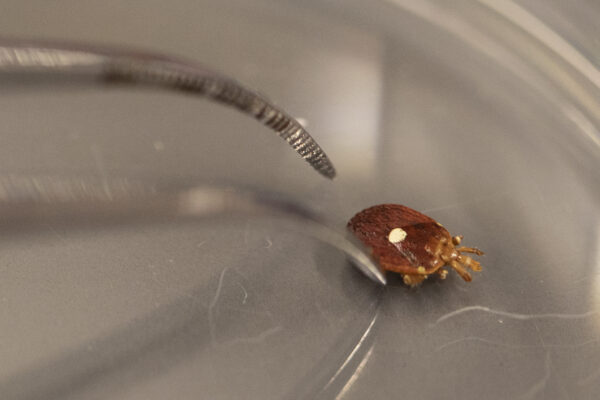 In the U.S., the alpha-gal allergy is formed after a bite from the lone star tick. The females, which tend to be more aggressive than males, are easily identified by a white dot on their back.

“The jury is still out. There’s still a lot of research on exactly what is going on,” says Onyinye Iweala, assistant professor in the UNC School of Medicine.

The prevailing idea is the tick contains the alpha-gal sugar in its saliva. When the tick bites, it transfers that alpha-gal into the human and can cause a reaction in the allergic immune system. Humans don’t carry the alpha-gal sugar, which is why reactions can occur. Another possible way of transmission is a tick may feed on an animal like a dog or deer and then a human for its next blood meal. The leftover alpha-gal from the previous mammal may then enter the bloodstream of the human.

The method of acquiring AGS isn’t its only unusual characteristic. Most patients report a delay between exposure and reaction, sometimes hours later. Commins thinks this may be because unlike most food allergies, alpha-gal patients react to a sugar and not a protein. Also, if the person can avoid further tick bites, for many, the allergy will eventually subside.

It may seem simple to avoid red meat, but the difficulty is in unexpected exposures. Some vegetable dishes are cooked with lard or beef broth, cooking surfaces can be cross contaminated, and many processed foods contain animal byproduct. Medicines are also a challenge, as gelatin is frequently used to create pill capsules, cow intestines to produce a common blood thinner, and heart valves from pigs or cattle are used in valve replacement surgery.

“It’s those hidden exposures that often are the ones that trip people up and can lead to accidental reactions,” Commins says.

A clue for other allergies

Understanding more about AGS may help prevent some of those accidental exposures. Commins, Iweala, and their colleagues try to answer fundamental questions by studying both the host and the carrier: What are the chances of developing the allergy from one tick? Does the tick need a blood meal before the bite? Are certain people genetically predisposed to acquiring AGS? What is the basic science behind developing the syndrome?

In 2019, with support from the CDC, Commins began a longitudinal patient study to understand the risk of developing AGS. Over the course of at least five years, researchers will gather surveys and blood samples from patients to learn more. Commins has also been named the leading AGS expert for the U.S. Department of Health and Human Services national tick-borne disease working group, where he will help develop public health recommendations for disease prevention, treatment, and research.

Earlier this year, Iweala received a $1 million grant from the National Institutes of Health to study at cellular and gene expression of the allergy’s development. The idea of studying a topic with so many unknowns may seem daunting for some, but Iweala finds it invigorating. It provides endless areas of exploration, she says.

“There’s a lot about food allergy that we just don’t understand,” says Iweala. “And I think if we can figure that out with something as bizarre as alpha-gal allergy, we might get tools and strategies that we can then apply to conventional food allergies and even other illnesses.”

Scott Commins is an associate professor in the Division of Rheumatology, Allergy, and Immunology within the UNC School of Medicine.

Onyinye Iweala is an assistant professor in the Division of Rheumatology, Allergy, and Immunology within the UNC School of Medicine.