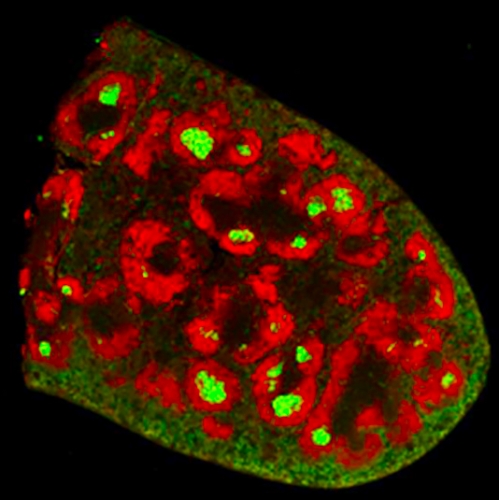 Photo courtesy of UNC Health Care
Immunofluorescence staining of a spleen of a mouse with deficient UTX in T cells. The green and red areas represent different zones of the spleen. There are fewer green areas in these mice because these areas are where T cells help B cells make antibodies.
By Mark Derewicz
Earth

Maureen Su sat at her computer preparing to give a talk on Turner syndrome, a common chromosomal condition, when the phone rang.

“Hello, this is Maureen.”

“Hello, yes,” the woman said. “I have Turner syndrome.”

Maureen sat up. The woman continued, “I heard that you are giving a talk about the Turner syndrome immune system at the regional Turner Syndrome Network in Charlotte, and I just have to tell you that I constantly get infections, especially ear infections.”

Su responded: “Well, actually, we’re studying why that happens. I think we might have found an important piece to the puzzle.”

Her team and Jason Whitmire’s UNC lab, in collaboration with several other scientists and clinicians across the UNC School of Medicine, found that a mutation in the UTX gene triggers a deficiency in a particular kind of immune cell that we all need to fight infections.  Turner patients have such an immune cell deficiency. The discovery, published in the journal Immunity, shows the biological mechanisms behind chronic recurrent infections and points to a potential target to alleviate them.

“We could never have done this without the collaborations of other labs at UNC,” Su — a professor of microbiology and immunology, and pediatrics — says. “It’s a great example of how a clinical problem informs basic research and then circles back to patients. They’re the ones who donated blood samples so that we could start this project. And they’re the ones who need us to help them.”

Turner syndrome occurs in approximately one in 2,000 live female births and is a chromosomal condition characterized by a complete or partial missing sex chromosome. Without treatment, patients with Turner syndrome typically grow no taller than five feet and may have other signs and symptoms such as a webbed neck, high-arched palate, and puffy hands and feet. They are typically of normal intelligence, although some may experience difficulty with some aspects of processing visual information. Approximately half of Turner syndrome patients experience chronic ear infections.

Su runs her lab out of the UNC Lineberger Comprehensive Cancer Center and receives patients at NC Children’s Hospital — where she saw so many Turner syndrome patients with chronic ear infections that she was inspired to find out why. For that research she needed grant money and help from Marsha Davenport, a former pediatrics professor at UNC and nationally renowned expert on Turner syndrome.

“Patients usually agree to help with research for one of two reasons: They either really want to help increase our knowledge of a disease, or they just have a great relationship with their doctor,” Su says. “Marsha had such loyal patients who loved her. We could not have done this study without them. Kids came all the way from the Bahamas to see Marsha.”

Davenport helped Su bank samples from 40 Turner syndrome patients. With the backing of a $50,000 NC TraCS grant and a variety of research support services available through the institute, Su used gene expression profiling technology to find which genes, if any, were highly expressed in Turner patients. This would point to a potential culprit.

“Using this technology,” Su says, “we found that this gene, UTX, is under-expressed in Turner patients. Well, it turns out that Terry Magnuson’s group here at UNC studies UTX.”

Terry Magnuson is the chair of the genetics department, vice dean of research at the UNC School of Medicine, and Sarah Graham Kenan Professor of genetics. His lab has perfected methods of knocking out specific genes to create mouse models of human disease. Mice can’t survive if UTX is knocked out in all cells. However, Karl Shpargel, a research assistant professor in Magnuson’s lab, devised a way to knock out UTX only in T cells — a type of white blood cell — in mice to see what might happen.

“We saw hints that the mice might be immunodeficient,” Su says. “So we called in virus expert Jason Whitmire, whose claim to fame is using mice to study acute and chronic viral infections that mimic infections in humans.”

Whitmire, a genetics professor, found that mice lacking UTX strictly in T cells were unable to resolve chronic viral infections.  “Upon closer inspection, we saw that there was a defect in the antibody response,” he says. That finding was important because Shpargel had limited the UTX mutation to T cells, which are a different cell type from the B cells that created the antibodies.

“So we dug deeper and found that the mice lacked a particular subset of T cells called ‘T follicular helper cells,’ which interact with B cells and induce the B cells to make antibodies to fight infections,” Whitmire said. “Terry’s group helped us show that these mice had defects in the expression of certain genes needed for the formation of these cells.”

Then Su circled back to look at human cells from Turner syndrome patients and found less T follicular helper cells compared to samples from healthy controls. In essence, under-expression of UTX led to an underperforming immune system, which could predispose patients to chronic ear infections.

“We know that UTX works as an epigenetic modulator,” Su says. “We think it controls how genes are read within a cell. And how they are read can be the difference between health and disease.

“There are inhibitors of UTX,” Su said. “And there are probably ways to increase UTX. So we think there could be pharmacological agents that can alter its expression to help Turner syndrome patients.” Such a new treatment could help thousands of people with chronic viral infections.

Interestingly, about 6 percent of people with Kabuki syndrome, another chromosomal disorder, have mutations to UTX and suffer from chronic ear infections. The majority have a different genetic mutation in a gene that interacts with UTX.

“We think this work could have broader implications for people who have chronic viral infections, which we’re looking into now,” Su says. “We wouldn’t have been able to do this kind of study without that initial seed money from NC TraCS. And we could never have done this kind of project without the diverse expertise at the School of Medicine and support from the Translational Team Science Award. This is such a UNC kind of study. It’s a good example of why this place is so special.”

Maureen Su is a member of the UNC Lineberger Comprehensive Cancer Center, the Thurston Arthritis Research Center, and the UNC Inflammatory Disease Institute. She is one of three UNC School of Medicine inaugural Yang Family Scholars, which were announced this fall. You can read more about her in this profile, which was published after she won a 2014 Jefferson-Pilot Fellowship from the UNC School of Medicine.

Jason Whitmire is a member of the Carolina Vaccine Institute and UNC Lineberger. Whitmire and Su were co-senior authors of the Immunity paper. Shpargel was co-first author along with Kevin Cook,, who was a postdoctoral fellow in the Whitmire lab during this project.

Terry Magnuson, also a Lineberger member, and Marsha Davenport were co-authors, as were Rebecca Fry, associate professor at the UNC Gillings School of Global Public Health and Lineberger member; Joshua Starmer, a postdoc in the Magnuson lab; Fatima Whitfield-Larry, a postdoc in the Su lab; Bridget Conley, a graduate student at the University of Minnesota; and Denise Allard Trout, a graduate student in the Su lab.