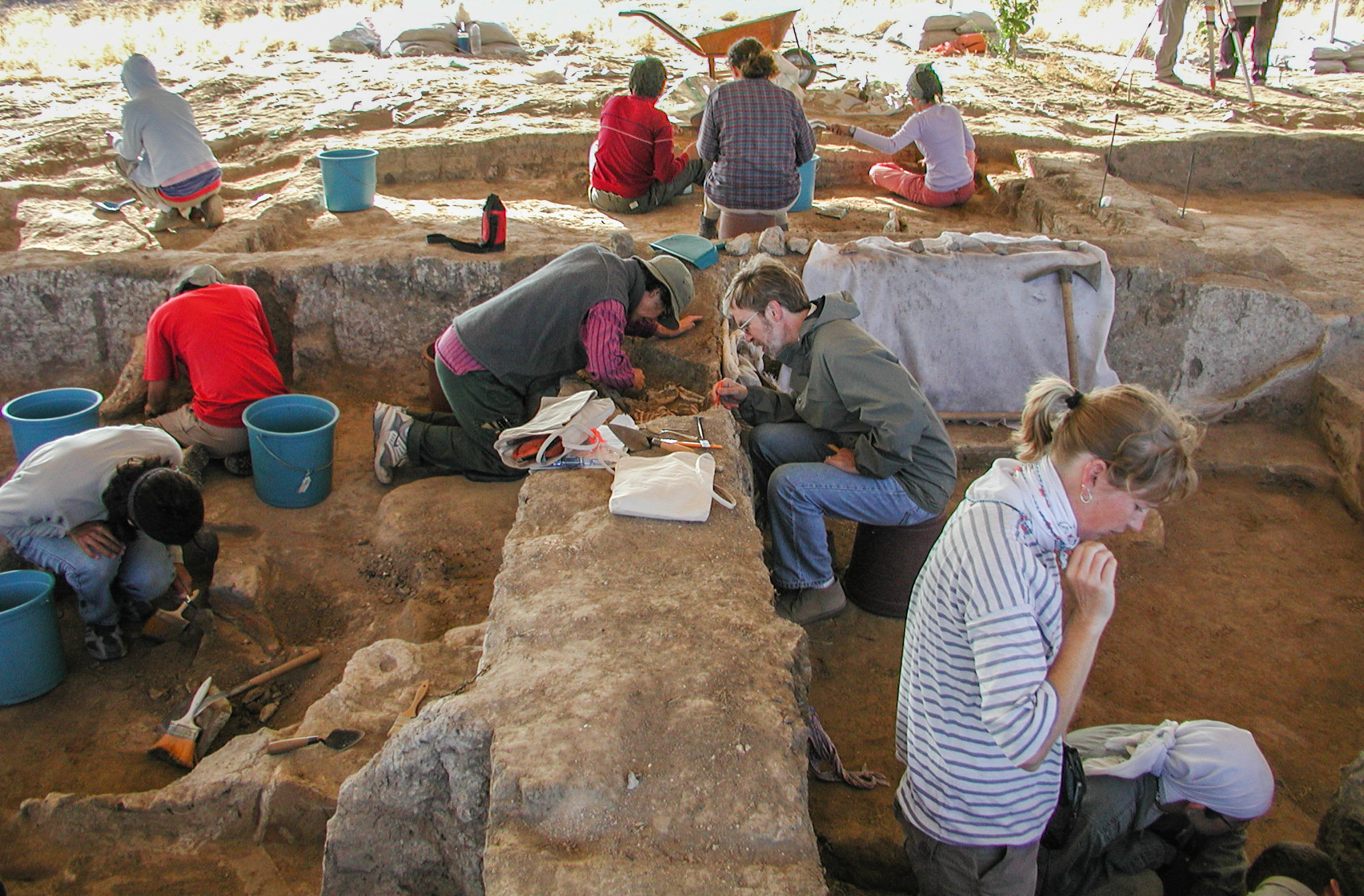 Archaeologist Clark Larsen (second from right) has spent many years working at Çatalhöyük, a famous Turkish archaeological site known for its radical population growth and a microcosm to study modern urbanization. (photo by Scott Haddow)
By Elise Mahon
Society

In 2005, when Clark Larsen got off a plane in South-Central Turkey, he wasn’t expecting a scene from his childhood to greet him. Larsen grew up in Nebraska, a state of endless cornfields and farmland. Despite having flown halfway around the world, he now found himself surrounded by much of the same endless, flat landscape.

“And then the driver says, ‘We’re close!’ And you can see in the distance, sticking up from these flat surfaces, a gigantic mound. I mean, it’s huge,” he recalls.

Çatalhöyük. Back then, Larsen didn’t even know how to pronounce the name. Now it slides off of his tongue with ease: Chat-el-hoy-yuk. More than 9,000 years old, the settlement has been under excavation for over 50 years and was named a UNESCO World Heritage Site in 2012. Archaeologists revere the site as one of radical population growth and a microcosm to study modern urbanization. It’s a famous example often studied by students learning about the importance of the agricultural revolution to human history. This was an opportunity of a lifetime and Larsen was awestruck.

Endeavors covered Larsen’s work in bioarcheology back in 1998, when he was a professor in the Department of Anthropology. He never would have thought then that his work would expand to Turkey and other areas of the globe — or snag him the Cozzarelli Prize, an award honoring scientific achievement in his field.

During his eight years at Carolina, Larsen studied the impact Spanish colonizers had on the native Guale people, who lived along the coastlines of what are now Georgia and Florida. Unlike journalists and cultural anthropologists, Larsen can’t interview his subjects. Instead, he interviews their bones.

As a bioarcheologist, Larsen relies on the data he and his colleagues can extract from human remains to recreate the lifestyle of the people he’s studying. He literally wrote the textbook on the field, published by Cambridge University Press in 1997. 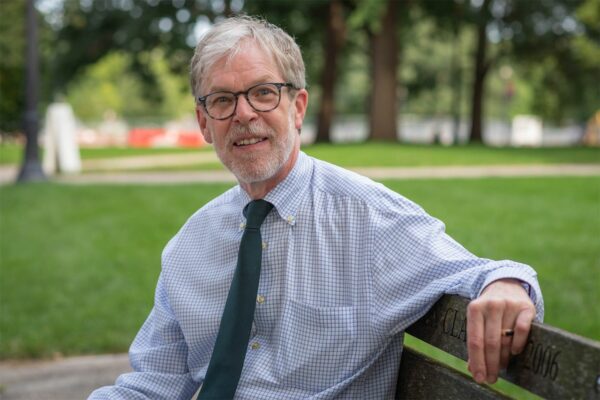 By extracting and comparing the isotopes of elements like nitrogen and carbon, bioarcheologists can piece together people’s diets.

“After the Pleistocene, when modern climates developed, humans shifted from hunting and gathering to agriculture,” Larsen says.

This transition to a grain-based diet 10,000 years ago also coincides with increased instances of malnourishment, interrupted growth, diseases, and earlier death that has persisted today.

“But in many ways, carbohydrates are not what you want to live on totally, because they’re missing essential amino acids or sources of protein,” Larsen says.

Bioarcheologists can also apply theoretical engineering principles to the cross-sections of bones to determine the amount of physical labor and violence an individual might have experienced while alive.

“If someone does heavy physical labor, their bones are going to look different from what most of our bones look like,” Larsen says. “People who do lots of running, walking, heavy lifting have more bone in their skeleton to withstand those forces.”

Extracting data from bones allows Larsen to tap into the secrets they may contain about behavior, adaptation, and the human condition. They help researchers build the story of our pre-historic ancestors’ lives. That information is vital to understanding who we are, how we got here, and even providing solutions to problems we face today.

In 2001, Larsen’s research attracted the attention of economist Richard Steckel, who asked him to join the Global Health History Project — an interdisciplinary team working to reconstruct the health of 1,000-year-old populations from skeletons around the globe.

The project collaborates with anthropologists and archaeologists in charge of collections of excavated bones around the world to extract and aggregate data on individuals’ health. Diet, disease, physical demands — it’s all put together to create a comprehensive assessment of ancient populations’ health in various regions. 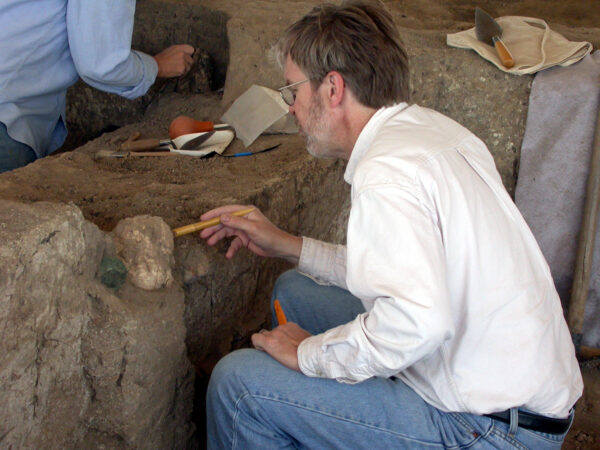 The first region Larsen contributed to was the Western Hemisphere, where they looked at excavated remains from collections across both North and South America. After great success, they ventured across the Atlantic to connect with archaeologists working with collections in Europe. The project was expanding, and Larsen was ecstatic.

Eventually, Larsen relocated to Ohio State University — where the project is based out of — and became the head of the anthropology department. The team is now awaiting further funding from the National Science Foundation to complete the project’s Asia Module. But this project isn’t the only thing that brought Larsen’s work to a more global scale.

While at a conference near London in the early 2000s, Larsen met up with Ian Hodder, a well-known archaeologist who had been excavating Çatalhöyük since 1993. Hodder invited him to the famous site.

“I’d be crazy in my world if I didn’t say yes. So, I did,” says Larsen, noting that his new position as the head of the anthropology department and a co-investigator on the Global Health History Project were already keeping him very busy.

But the draw of Çatalhöyük was too great to pass up. For the next two decades, Larsen and a colleague led the bioarcheology unit at the massive excavation, spending weeks at a time on the ground in Turkey. Çatalhöyük is such an exciting site for researchers because it started as a small village of a few families and grew to be as many as 8,000 people, making it a great case-study for the impact of urbanization on culture and human adaptation.

A look inside Çatalhöyük. (photo by Murat Özsoy, Wikimedia Commons)

Since its growth was made possible by the shift from a nomadic hunter-gatherer way of life to a more sedentary, farming lifestyle, it’s also a great location to study how human health changed at a critical time in history. Initially, it meant people were less mobile and eating less nutritious food.

Over time, though, Çatalhöyük grew larger and larger, causing people to have to travel farther to get the resources they needed. Larsen and his team think that this increased need for mobility, combined with their carbohydrate-rich diet, led them to be more stressed and to experience poor health outcomes.

He also believes echoes of those issues can be seen today. In fact, he was recently awarded the Cozzarelli Prize for his works’ relevance to modern-day problems like overcrowding, infectious disease, environmental issues, and violence.

“People ask me, ‘What’s the relevance of studying these old bones to reality?’ But what we’re looking at is the origins of that reality,” Larsen explains. “Those are tough, tough issues that the world faces: climate, climate change, global warming, pandemics, all sorts of scary stuff. That did not arise for the fun of it, or all of a sudden. Now, we can study the origins of those circumstances by looking at these early populations that were starting the trends.”

The magic of collaboration

Larsen couldn’t have imagined having the opportunity to work on large-scale projects like this when we last checked in with him in 1998. But he also knows he couldn’t have gotten here without his time at Carolina.

Larsen studied the Guale alongside graduate student Tiffiny Tung, now the head of the anthropology department at Vanderbilt University. It was through that project that her interest in how political structures impact health outcomes took root.

Tung went on to study this topic in Peru, leading excavations to uncover stories of a 1,400-year-old empire known as the Wari. She also studied how Spanish colonialism affected Indigenous people in Peru, a project that was inspired by the work she did with Larsen on Spanish colonization in Florida. With the combined expertise of Larsen in skeletal analysis and Brian Billman in Peruvian archaeology, Tung felt confident and supported throughout her dissertation work.

“Clark just put trust in me, and that’s a real boost,” Tung says. “He made sure that we had a peer group. It was important to him that he fostered that kind of collaborative spirit among us so that we weren’t competitive with each other, but actually supported each other. And that, to me, was probably one of the most potent parts of my graduate education.”

Larsen spoke of how vast the field of anthropology is, a logical breadth for a discipline that studies all aspects of the human condition. That makes collaboration and support between researchers all the more important.

“These ideas just don’t happen by magic. They involve experience and being around other anthropologists and faculty lengthy periods of time and seeing how things develop,” Larsen says. “So, the environment that I experienced at UNC was really important.”

Clark Larsen is a distinguished professor of anthropology at Ohio State University. Previously, he was a professor in the Department of Anthropology within the UNC College of Arts & Sciences.

Tiffiny Tung is a professor in and department chair of the Department of Anthropology at Vanderbilt University.