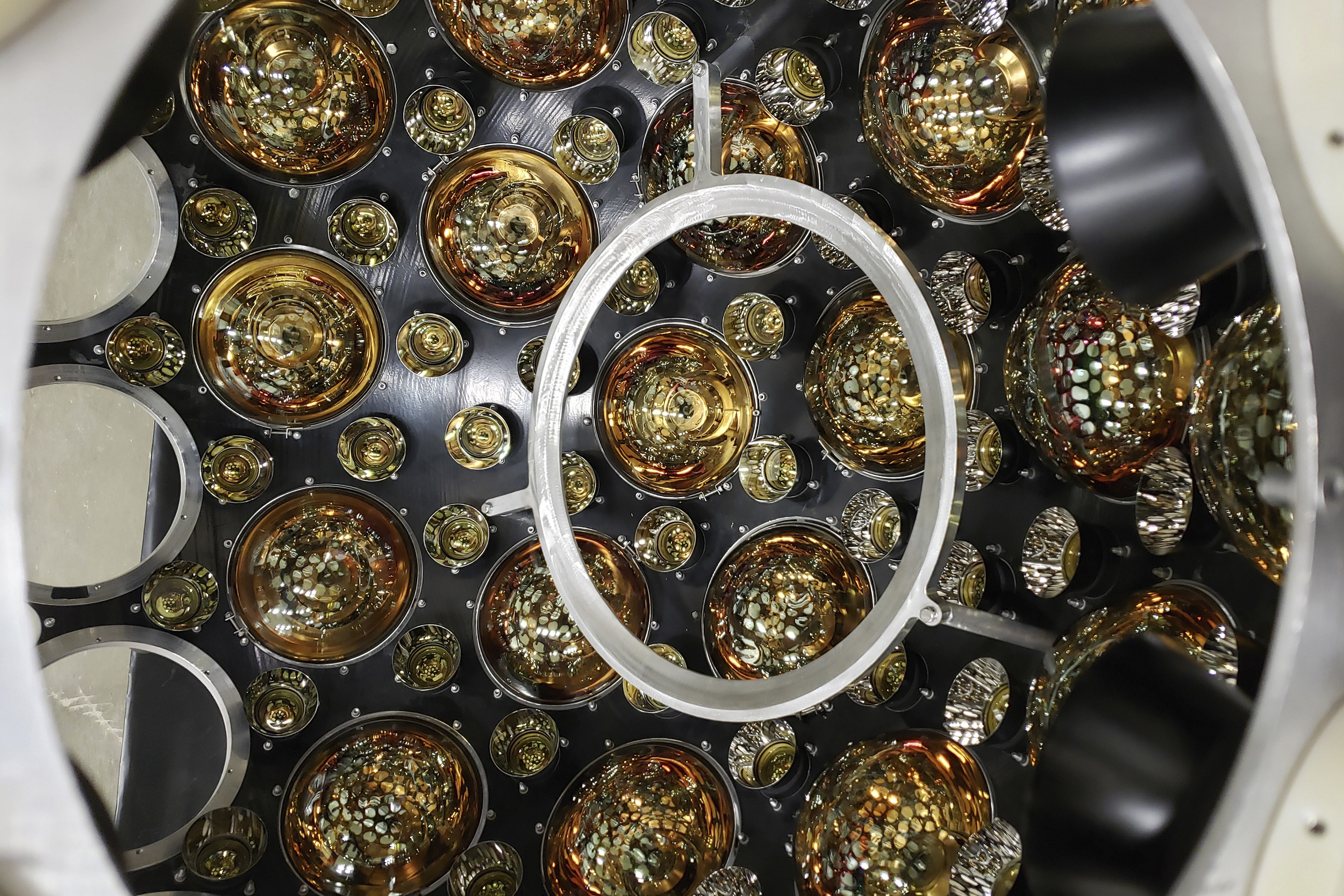 A look inside the NuDot experiment, which uses a series of fast-timing photodetectors and a "beta gun" to measure light output and, ultimately, neutrinos. (photo courtesy of Julieta Gruszko)
By Alyssa LaFaro
Earth | Foundations

A sphere covered in nodes and black wires sits in the middle of a large white room. It’s about the size of a jungle gym, and each node is a long cylinder that can detect light and multiply its output by 100 million times. While this sounds like a piece of alien technology from a science-fiction novel, it is quite real and does something incredible: It measures energy. More specifically, it measures elementary particles called neutrinos. If you want to get technical, it measures a lack of neutrinos.

Neutrinos are everywhere. Most are created from nuclear reactions that occur inside the sun and stars; others come from radioactive decay that heats Earth’s interior; and some form inside humanmade nuclear reactors. About 10,000 trillion of them will pass through you by the time you’re done reading this sentence. They are neutrally charged, they move at the speed of light, and they have almost no mass — a recent, Nobel Prize-winning discovery.

If there’s so many of them, why does this device measure their absence? 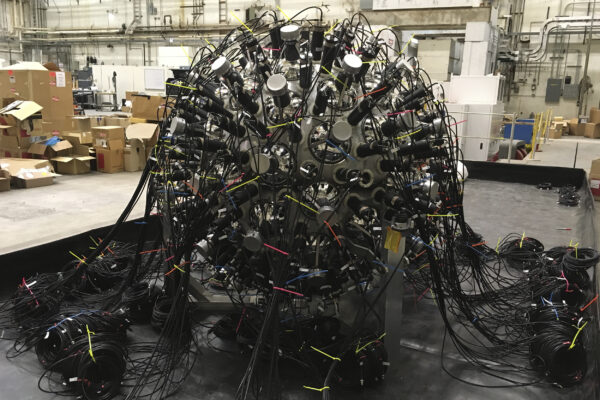 This is what the outside of the NuDot experiment looks like. (photo courtesy of Julieta Gruszko)

“Neutrinos are hard to detect, so you’re going to miss most of them,” UNC physicist Julieta Gruszko says. “If you’re looking for something rare, you don’t want to see just one out of every million. So, instead, I look at everything else.”

By using this contraption to measure the signals of “everything else,” Gruszko and her lab can, by process of elimination, determine whether neutrinos are present in various energy exchanges. She does this in an attempt to answer one of the largest questions the physics community has ever asked: Why is there more matter than antimatter in the universe?

Or, more simply, why does our everyday world exist?

Matter is any substance that is observable. Planets, water, people, vacuum cleaners. All of these things are made up of atoms and their interacting subatomic particles — protons, electrons, neutrons — and so are considered matter. Antimatter, matter’s opposite, is much more obscure. It exists at the atomic level in the form of antiparticles. The electron’s antiparticle, for example, is an anti-electron called a positron. Likewise, the proton’s antiparticle is the antiproton.

According to what physicists currently know about the laws of the universe, the Big Bang should have produced equal parts matter and antimatter, which should have canceled each other out, leaving behind only light — just pure energy — and no actual matter. But that’s not what happened. Instead, the entire universe formed because the Big Bang generated much more matter than antimatter.

“Neutrinos could be the key for making more matter than antimatter,” Gruszko says. “They could tell us why in the early universe we ended up with this extra matter that is everything around us. And I think that’s an exciting question to try to answer.”

Shortly after radioactivity was first discovered in 1896, physicists began rigorously studying it to observe what happens to energy emissions as they break down. When a neutron decays, for example, it transforms into a proton and an electron. Physicists ultimately uncovered that additional energy is also produced in this process, something they couldn’t explain.

Then, in 1930, Wolfgang Pauli proposed that beta decay produces a third, unnamed particle that ties up this energy problem in a tidy bow: the neutrino. The existence of these elusive particles — and their opposite, the antineutrino — wasn’t experimentally proven until 1956, but once they were, the field of physics exploded.

“Neutrinos are kind of a fun thing to study in that over and over again they’ve saved our concepts of how the universe works,” Gruszko explains. “When they were first proposed, it was to rescue the conservation laws — conservation of energy and momentum, which are foundational to how we understand the universe.”

In the ’60s and ’70s, physicists observed that neutrinos have “flavors,” meaning there are different kinds. Nearly 30 years later, that finding helped reveal that these ghost-like particles have tiny, almost-zero masses. While this seems like a miniscule discovery, it was world-changing for the field. And the first time in decades that physicists began questioning the Standard Model, which describes the fundamental forces of the universe. 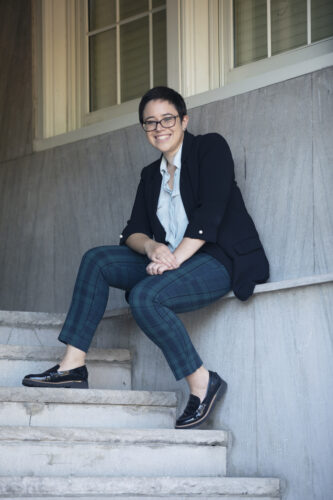 “I’m hoping that neutrinos can rescue us again,” Gruszko admits. “If they are the origin of matter, it gives us a really elegant way to explain [asymmetry]. And physicists love elegance.”

Creating tools to understand the universe

While neutrinos themselves are seemingly abstract, the work that goes into studying them is incredibly tactile — something Gruszko loves about this research. The tube-covered sphere that she uses to look for neutrinos, for example, was developed by MIT physicists, with Gruszko’s help.

“It’s not all math and working with pencil and paper,” Gruszko says. “A lot of it is how do I fix the cabling on this thing? How do I do plumbing? Neutrinos, especially, straddle the world of making an instrument to study something and the world of observing the universe around us.”

NuDot is a “scrappy R&D experiment” that will move to Triangle Universities Nuclear Laboratories, a collaboration among UNC, Duke University, and NC State University, in 2021. It employs fast-timing photodetectors and a “beta gun” that measure light output. The experiment also utilizes a technique called liquid scintillation, which uses a component of dish detergent that glows when energy is deposited into it.

“Liquid scintillation is a workhorse of neutrino physics,” Gruszko says. “It’s how physicists discovered that neutrinos have mass.”

NuDot, she adds, will lay the groundwork for larger versions of these experiments 15 to 20 years down the road.

Gruszko also works on a collaborative project hosted at the Sanford Underground Research Facility in South Dakota called the Majorana Demonstrator. Located one mile underground to avoid interference from cosmic rays — high-energy atomic particles that move through space at the speed of light — it uses crystals from the metalloid element germanium to look for one of the rarest forms of radioactive decay: neutrinoless double-beta decay.

What makes this kind of decay so unique is that it, theoretically, produces zero neutrinos, unlike the usual beta decay, which is how we know neutrinos exist in the first place. This uncommon radioactive breakdown suggests that the neutrino could be its own antiparticle — which, like discovering they have mass, would be an instrumental discovery for the field.

Just like the fact that neutrinos have mass, particles that produce their own antiparticles violate some of the normal rules of physics. Identifying this characteristic among neutrinos would continue to unpack why the universe has more matter than antimatter.

These ultra-high energy events also occur inside nuclei, meaning this work applies more directly to how we study and understand the human body. Neutrino studies have already aided the medical field and the creation of new technology, like PET scans, that can look inside our tissues and organs to detect disease.

Neutrinos have the potential to impact other disciplines as well. They can expand our knowledge of Earth’s crust and oceans, how planets form, and nuclear energy.

“You really can’t plan for the advancements that basic science like this leads to,” Gruszko says. “It can seem obscure at first, but then it revolutionizes the world. So when things get frustrating, you focus on the big picture: our place in the universe.”

Julieta Gruszko is an assistant professor in the Department of Physics and Astronomy within the UNC College of Arts & Sciences.