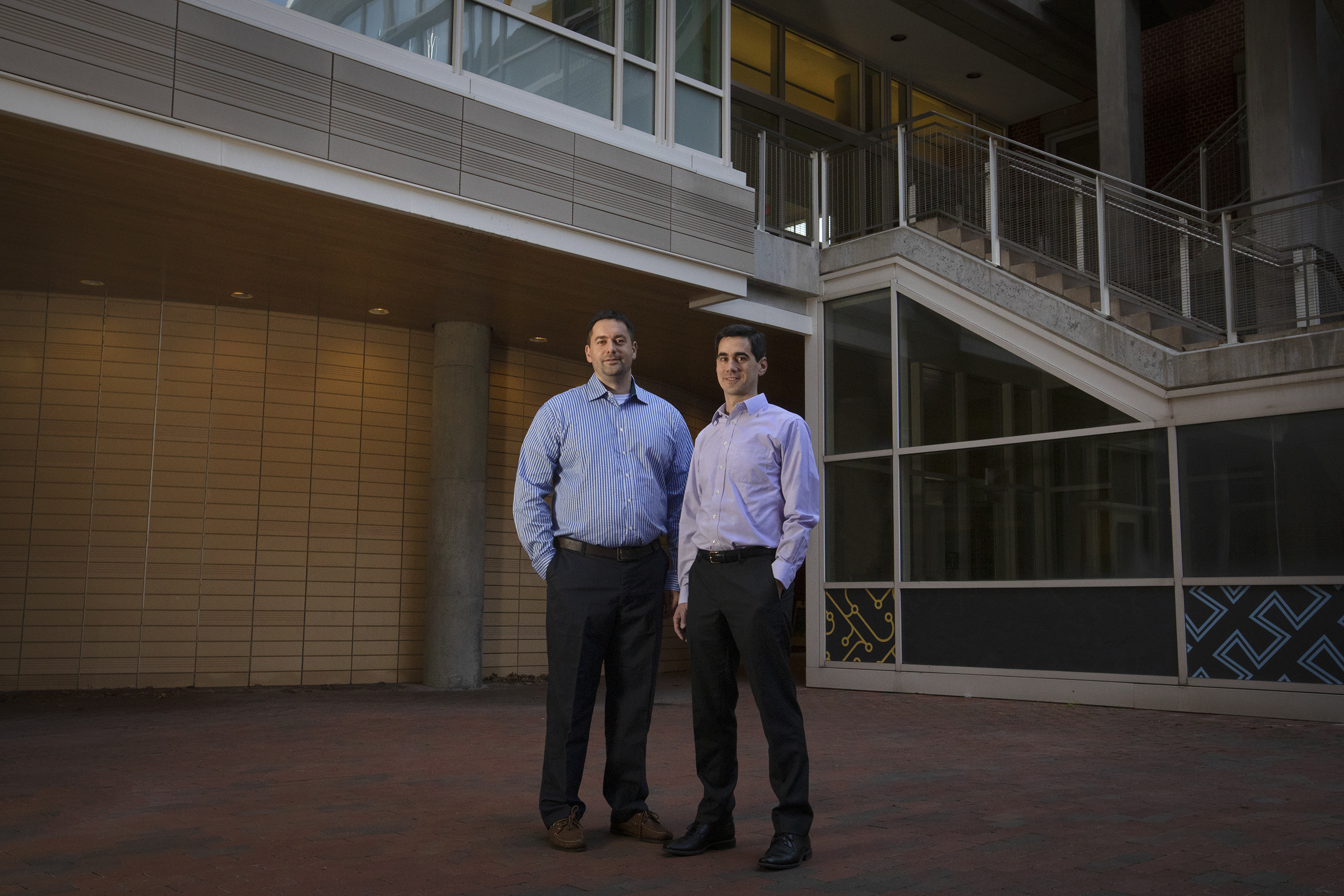 photo by Megan May
Jonathan Williams (left) and Brian McManus take a closer look at the economics side of the internet industry to provide insight for future policy changes.
By Darren Abrecht
Invention

Itʼs not hard to imagine that the World Wide Web might have turned out very differently. Internet service providers (ISPs) — companies like Comcast, Charter, and Frontier that connect our computers and phones to the network — could have chosen to charge their customers for access to different tiers of the web, just like cable and satellite companies do with television channels. Maybe checking CNN or grandmaʼs photo blog would be part of the basic package, but reaching Facebook or Instagram would cost extra.

On the other hand, they could have levied extra fees on publishers who want their content to reach consumers faster. Such prices could be easily absorbed by well-heeled companies like Microsoft or Google, less so by your local newspaper or a nonprofit like Wikipedia.

Today, 140 million people around the world have subscriptions to Netflix. But would the Netflix of 2007 — the year that a much smaller version of the company first offered video streaming — have survived if they had to pay ISPs extra to allow their traffic to reach customers? Or would we still be heading to Blockbuster?

ISPs have long had the technical ability to speed up some services and to slow down or completely block others. But they have mostly abided by net neutrality, the idea that they shouldnʼt play favorites with the traffic that flows over their networks. That principle was a longstanding industry norm before being formalized into rules by the Federal Communications Commission from 2010 to 2015.

Then, in December 2017, the FCC rolled back those protections, opening the door for new experiments in pricing models. The decision generated massive public backlash, including an online petition gathering over 2.5 million signatures.

Net neutrality isnʼt dead. The debate, and the lawsuits, continue. Those charting the course for industry and for government regulators will need solid information about how media consumption habits change when pricing incentives are added to the mix. Two researchers at UNC are poised to provide such guidance.

The word “economist” might not call to mind someone who looks like Jonathan Williams. Heʼs a big guy with a deep, wry laugh and a penchant for casual wear. His research partner, Brian McManus, is neat and crisply-dressed, with a precise and thoughtful manner of speaking. Someone meeting the two of them for the first time might expect them to get along like Oscar and Felix from “The Odd Couple.” But nothing could be further from the truth.

“Thereʼs not much of a story to be told in that way,” McManus says, laughing, when asked to describe differences in his and Williamsʼ research approaches. “We have these similarities in our backgrounds, and we view certain problems the same way. We agree in many ways on what research we would like to do.”

“I think we both move the ball in similar ways and complement each other,” Williams agrees.

Those similarities run deeper than their differences. Both men received their PhDs from the University of Virginia — they were there at different times, but had many of the same advisors. And they both ended up at UNC, where they study the telecommunications industry under the banner of Industrial Organization (IO), a branch of economics that examines how decisions made by businesses affect, and are affected by, the markets in which they operate.

Free for all or pay to play?

Proponents of net neutrality argue that treating the internet as a neutral intermediary or “common carrier” guarantees an equal playing field for competition. It allows new and small publishers with tight budgets to have as much opportunity to prosper as larger outfits more equipped to absorb ISP fees. Many believe that had traffic shaping been present on the early web, it never would have become the thriving marketplace of goods, services, and information that it is today.

On the other hand, opponents of net neutrality point out that in those early days, ISPs never had to contend with the kinds of problems that they have today. Modern internet services such as video streaming place a high demand on network infrastructure. Allowing companies to recoup some of the costs of carrying this traffic creates incentives for them to upgrade their network speeds and to lay fiber cable into new markets — improving the overall experience of even basic-tier subscribers.

For the first time, Williams and McManus have access to a dataset that gives detailed information about how individual households react when an ISP changes its pricing strategies. They are using the data to build a new model of consumer behavior that they expect to be useful to anyone seeking objective answers to these questions.

“Like a lot of other people, I really enjoy the new opportunities for watching TV and movies, and I want to learn more,” McManus says. “This is an opportunity for academics to make a real contribution in how an important market is viewed by policy makers.”

Most of the time, home internet subscribers donʼt have to worry about how much bandwidth theyʼre consuming. Mobile data customers, on the other hand, often have limits on how much they can download or stream before additional fees apply.

A North American ISP recently experimented with using this model on home plans, as well. They collected detailed information about how individual households reacted to the pricing change, creating an opportunity for McManus and Williams to study consumer choice at an unprecedented level of detail.

Charging customers extra for high data use has the effect of penalizing frequent video streamers, leading to behavior similar to what one might expect if the company were to charge more for that traffic outright. Williams and McManus were interested to see if this pushed customers away from online streaming services like Netflix and SlingTV and toward bundled cable television subscriptions.

If youʼre a “cable cutter” — someone who foregoes traditional television programming in favor of getting your sitcom fix from online video streaming services — youʼre far from alone. A 2016 report found that one in five U.S. households had made that choice, with more expected to follow. Many consumers find that the cost of an internet-only subscription is cheaper than a package that bundles internet and television.

But it isnʼt that much cheaper — a fact that ISPs have gone to great lengths to point out to their customers. Providers have a good reason to push subscribers to add TV to their bundle, beyond the obvious fact that thereʼs more money to be made selling two services than selling one. Itʼs much more efficient to deliver “NCIS” once to a large number of users via a broadcast technology like traditional television, then to deliver the same content repeatedly and on-demand over the internet. Better use of network resources means that more subscribers can be added or upgraded before the company has to pay for new hardware.

Williams and McManus have confirmed that the preference for video streaming is strongly affected by pricing incentives. Limiting the amount of bandwidth that customers could use with a basic internet plan steered them into paying for more data or for a bundled television service.

In future studies, they hope to get a more detailed perspective of how price moves consumers to choose between different video products. If Netflix raises its prices, what does that do for subscription rates to Hulu or to HBO Go?

“Looking more closely at those choices, weʼll get a picture on where the demand comes from for different services,” Williams says. “And critically, it will allow us to do some analysis of how their choices could be different under different pricing arrangements or under different policy constraints.”

A wave of recent corporate mergers has resulted in some video content providers being owned by the same companies as the ISPs that will be delivering their content to customers. That raises concerns about anticompetitive behavior.

For example, HBO is owned by AT&T as a result of its 2018 acquisition of HBOʼs parent company, Time-Warner — a move that the U.S. Department of Justice sued unsuccessfully to stop. With no net neutrality regulations in place, AT&T could, in theory, block its customers from streaming HBOʼs competitors using their data plans. It could also charge those competitors for access to its network, or charge its own customers more for the right to stream them.

Williams and McManusʼs work suggests that ISPs would have reason to use pricing strategies to shape network traffic to favor certain services over others. But they might also choose not to, to avoid inviting renewed regulatory scrutiny or raising the ire of their customer base.

As networks become faster and bandwidth less scarce, Williams believes itʼs more likely that ISPs will partner with content providers to make popular services easier for customers to use — as long as using those services doesnʼt cut too deeply into their own content offerings.

“You actually are kind of seeing that already,” he says. “Comcast, for example, is integrating Netflix into its settop boxes. Some of them are giving you hardware also — like a Roku or some other type of streaming device — because they know that those increase the value of their internet service, so they want to make it easy to get to them.”

The audience for this work reaches far beyond the university. Net neutrality is a politically contentious issue. While fellow academics are the first people they hope to reach, McManus says the models they are creating can be used by anyone to get insight into who the winners and losers are when regulatory policies change.

Itʼs this wider-world appeal that has led to their branch of economics research, known as Industrial Organization (IO), to experience a boom in popularity in economics departments around the Triangle and elsewhere.

At UNC, the home for IO is the Center for Regulatory and Industrial Studies, where Williams, McManus, and several of their fellow economists support new researchers and hold events to introduce students to working analysts from academia and industry, from the public sector and the private sector.

“Students who walk out as an undergrad in IO are always better prepared to go right into economic consulting or work in a corporate environment,” Williams says. “It could be somebody like Amazon — they have hundreds of economists now. It could be the government: the Department of Justice, the Federal Trade Commission. I donʼt think thereʼs any other field in economics thatʼs so broad in terms of where people can operate.”

“We are in a fortunate position with the questions we can answer or contribute to, and all this has helped students gain interest,” McManus adds. “The field has developed a set of methods that people have recognized are useful for a really wide variety of important questions. Itʼs an exciting area to be in.”