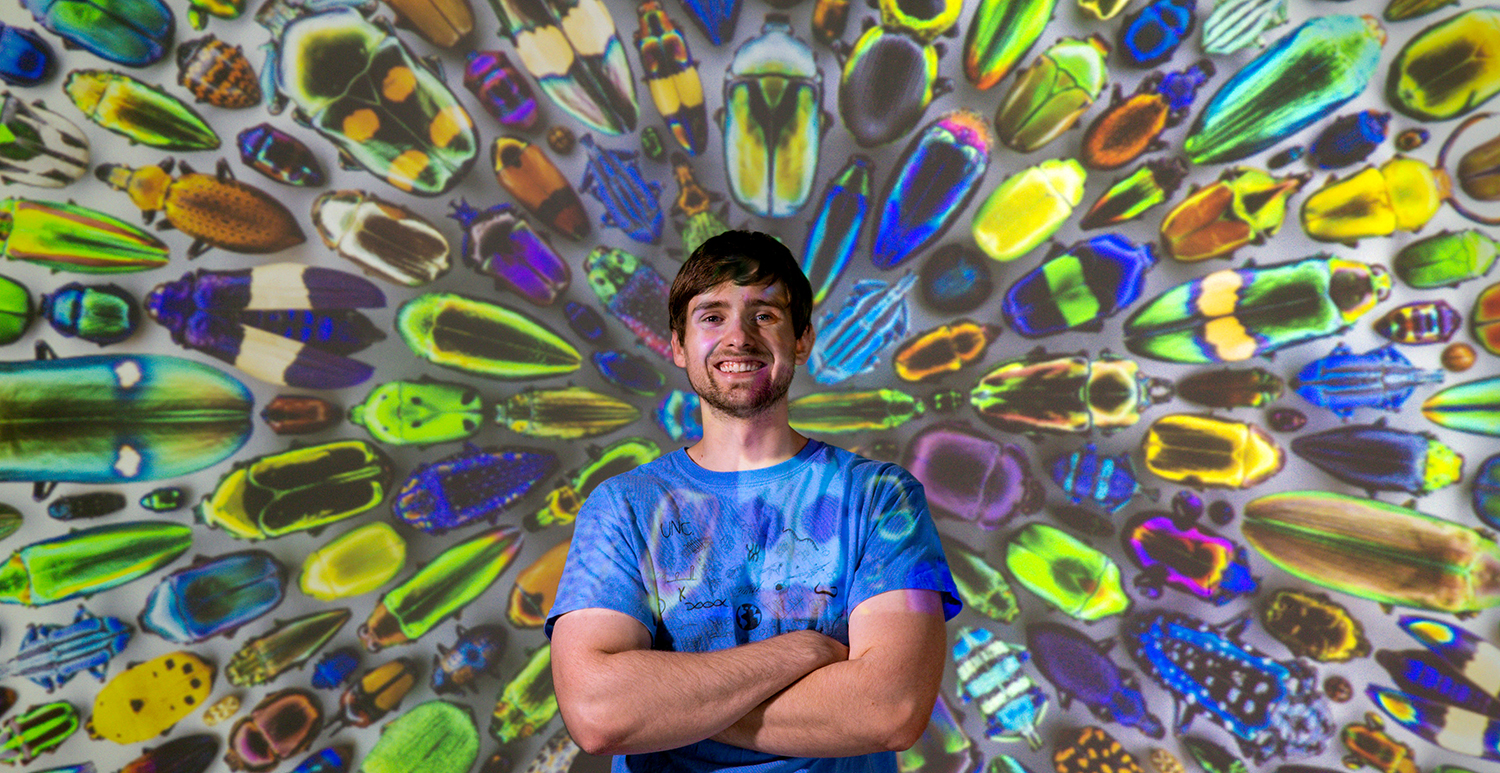 Brian Lerch is a PhD student in the Department of Biology who creates mathematical models to address biological problems. Here, he poses in front of a colorful array of beetles — an artwork from Christopher Marley's "Exquisite Creatures" exhibit, now on display at the North Carolina Museum of Natural Science in Raleigh. (photo by Andrew Russell)
By Alyssa LaFaro
Earth | Foundations

“Crikey!” If you were alive in the late 1990s or early 2000s, you probably heard this at least once while flipping through TV channels. It didn’t take long for Steve Irwin to become a household name thanks to his hit Animal Planet show, “The Crocodile Hunter.” The reptile wrangler’s fearlessness, cool creature encounters, and Australian accent charmed viewers of all ages.

Brian Lerch was one of them.

“I loved stuff like that when I was a kid — and going to museums and zoos. Those types of institutions really helped me interact with science,” he shares.

Lerch is a self-described nerd and asserts he has been his whole life. He knew he wanted to major in biology and pursue research since his first week of college at Case Western University in Cleveland, even though he didn’t understand what research really looked like. But he had a ton of enthusiasm. He emailed a handful of professors about joining their labs and received a swift response from Karen Abbott.

Abbott is a theoretical ecologist, which means she uses mathematical models to answer big questions in biology. More specifically, she is interested in why various species of organisms exist and what causes their populations to change over time. Lerch had never heard of this field, but Abbott gave him the freedom to ask his own questions — and that autonomy enticed him.

After reading a paper about the extinction risk of African wild dogs, Lerch decided to replicate its results, excited by the possibility that the project could help protect these animals. Ben Nolting, a postdoctoral researcher in the lab, helped Lerch build the model and write his first paper. They discovered that the size of the overall population has little to no influence on patterns of births and deaths in social animals like these canines, whereas the size of their groups is critical.

“When I joined Karen’s lab, I just thought the questions were cool. I didn’t think I would do it for the rest of my life,” he says with a laugh. “I liked science and didn’t want to pigeonhole myself. But after those first few months in Karen’s lab, I completely fell in love with theoretical ecology and ended up doing multiple projects.”

Lerch picked up math as his second major and went on to pursue a PhD at UNC-Chapel Hill. Now, as a PhD student in the biology department, he continues to study theoretical ecology and evolutionary biology.

But what can math really tell us about biology?

“I get that question a lot,” says Lerch, chuckling.

Unlike field researchers, who study organisms out in nature, Lerch solves the same problems on paper. And he likes it because he can control all the variables.

“You can turn on and off features of a system that you probably can’t control in the real world,” he says. “And by turning those individual parts on and off, you can see the role each one plays.”

The field of theoretical ecology arose in the 1950s, in large part thanks to Robert MacArthur, one of the founders of evolutionary ecology who applied mathematical insights to the field and became known for his work on species diversity. He believed that “the deepest remaining mysteries of natural history can be reached by leaps of the imagination,” two of his colleagues wrote in his biographical memoir.

Within just 15 minutes of speaking with Lerch, it feels like MacArthur’s sentiment must be a core belief of theoretical ecology. Lerch is smiley and talkative and passionate — and enthralled by the fact that this field allows him to ask almost any question his ecological heart desires.

“Theoretical ecology can help us figure out where we need to look and what systems we need to worry about when it comes to where we should spend our conservation dollars,” he says.

The models Lerch creates can provide a framework for biologists, answering general questions rather than those related to one species. He mostly uses what are called proof-of-concept models, which test ideas using mathematics.

Lerch begins by making a hypothesis about something in nature. In studying how predators and prey interact, for example, he might assume that such interactions lead to the creation of more predators and the loss of prey. He creates an equation to represent this scenario and then uses applied mathematics to uncover how that equation functions and if its outcome matches his prediction.

“We’re just trying to see if our intuition is correct,” Lerch says. “Maybe there’s a verbal argument that says, A should lead to B because of C. And the models we study are trying to formalize what we mean by the statement and test whether it actually works. These systems we study are complex. There’s a lot of moving parts. As humans, we’re bad at predicting what’s going to happen just based on intuition alone.”

These predictions are like stories, says Maria Servedio — a UNC biologist and Lerch’s advisor — and researchers like Lerch are trying to fill in the gaps.

While this type of research represents basic science at its finest, Servedio points to a major example of how theoretical ecology and evolutionary biology are helping humans right now: the pandemic. Disease modeling, she explains, comes from theoretical ecology — and is something she teaches her students in her classes.

“And evolutionary biologists have been predicting for ages that something like omicron would come out — because we know that the selection pressures that would exist, for example, in an immunocompromised person would be ideal for the evolution of resistance to vaccines.”

This type of research allows Lerch to ask a lot of questions — as many as he wants. That could get out of control, he admits, so he tends to choose topics that overlap in some way. One that he is most interested in is social behavior.

“The reason that social behavior is interesting, especially to evolutionary biologists, is that these social behaviors come at a cost to yourself,” Lerch shares.

Lerch wants to know why organisms living in groups cooperate. In other words, why does everyone play nice?

“The fact that cooperative species tend to live in groups is no coincidence,” he says. “They’re often interacting with the same individuals repeatedly and individuals that they’re related to, which is super important for this question.”

His work on African wild dogs, specifically, focuses on this topic. Lerch studies how the smaller groups that form within the overarching population are essential to survival — and can help researchers understand social evolution.

“How populations consisting of groups grow and shrink and how groups interact are really important,” Lerch shares. “They feed back into the evolution of social behaviors.”

Lerch is equally interested in reproductive behavior. He has written on and developed models for organisms in same-sex relationships, with multiple mates, that divorce, and that are widowed.

One of his most recent projects unpacks the evolution of divorce behavior in birds. More specifically, he’s created a model to show why divorce occurs — one reason is often nest failure — how it affects reproduction, and how it changes the distribution of territories.

“In biology, divorce means that a monogamous pair in one year does not remain together in the next year, despite the fact that both individuals survived,” Lerch explains. “It’s extremely widespread and could occur in any species that is monogamous. Most birds are monogamous. How often divorce occurs among birds, though, varies among species: Some birds divorce every year, some almost never divorce.”

Whether dogs or birds, Lerch believes that unraveling these biological processes through modeling helps strengthen our understanding of evolution and leads to new areas of study. And it may even have the potential to impact future pandemics, Servedio points out.

“I’m just speculating, but research such as Brian’s work on social interaction could help us refine the human behavior component of disease models,” she says. “That’s the piece that’s missing. How human behavior affects transmission rates is a bit of a wild card.”

Most recently, Lerch’s work has led him to study one of biology’s most charismatic organisms: the baboon.

Previous research on these primates suggests that when their groups become too large they risk division — competition causes smaller groups to form and break away from the troop. Using data collected on these animals, Lerch wrote a paper that unpacks how such separations might occur. He imagined that some could be more democratic, where each individual chooses which group to join after the split; while others are despotic, with one individual dictating who joins which group. 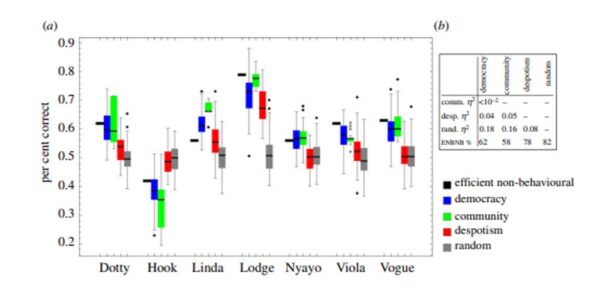 Using data from six real-life baboon community fissions, Lerch created this model to show how his democracy and/or community algorithm best predicted which bonds were broken or maintained. (courtesy of Brian Lerch)

Using a series of algorithms, Lerch simulated these fissions and discovered that animals with complex social structures do a better job of maintaining their social networks when the entire group makes the decision of how to separate — versus one tyrannical individual controlling the division.

Lerch plans to keep studying baboon populations in collaboration with Susan Alberts, a biologist at Duke University. Alberts focuses on one of the longest-running studies of wild primates in the world — the Amboseli Baboon Research Project in Southern Kenya. Lerch hopes delve deeper into the project data to gain insight into real-world social behaviors.

“If I had to pick one thing to work on for the next five years, it would be this,” Lerch shares. “This would allow us to better understand how individuals’ social behavior and strategies employed by social groups shape the group-level processes that in turn shape the dynamics of social populations.”

No doubt he’ll have lots of questions.

Brian Lerch is a PhD student in the Department of Biology within the UNC College of Arts & Sciences.

Maria Servedio is a professor in the Department of Biology within the UNC College of Arts & Sciences.

A special thanks to the North Carolina Museum of Natural Sciences in Raleigh for letting us use an image from Christopher Marley’s “Exquisite Creatures” exhibit as the background for Brian’s portrait. The exhibit is on display at the museum through March 20.