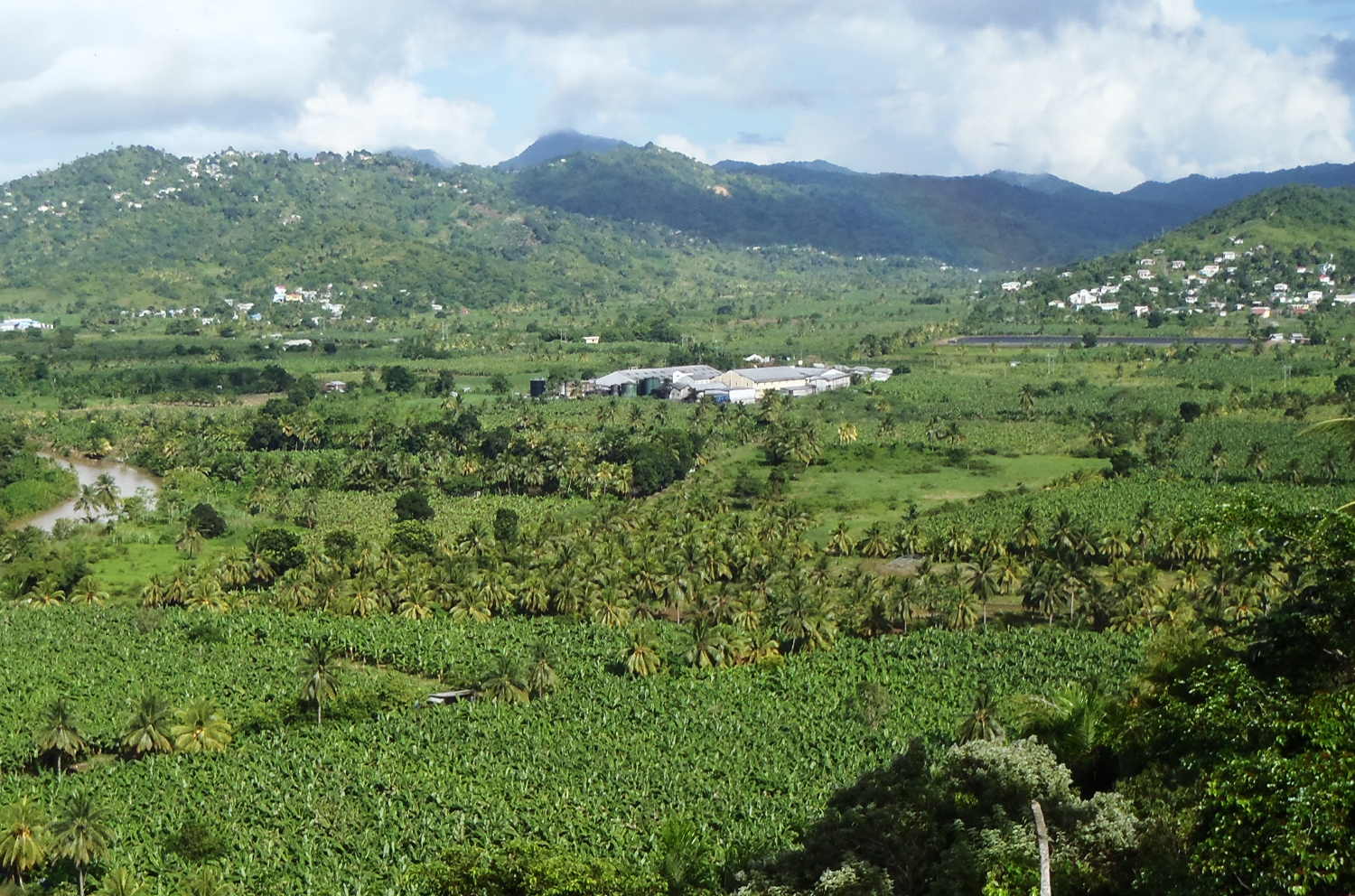 In 2010, Hurricane Tomas dumped 16 inches of rain on Saint Lucia’s Roseau Valley — the second-largest agricultural region in the country — flooding the banana farms that fill the valley and compromising the homes of farmers on the surrounding hillsides. UNC anthropologist Caela O’Connell was in Saint Lucia for a project on the farms during Tomas and returned two years later, in 2012 (when she took this photo) to assess recovery. Look closely to find bare spots on the hills and mountains, where landslides wiped out homes and vegetation. (photo courtesy of Caela O’Connell)
By Megan Suggs
Earth | Society

Caela O’Connell sat in her apartment, staring at a flickering candle. Her hands gripped the backpack straps on her shoulders. The hills around her, heavy with sudden rains from Hurricane Tomas, groaned. The wind howled. It was strong enough to blow rain through the cinderblock walls of her Saint Lucia apartment, flooding it with six inches of water.

“I really wasn’t sure I was going to make it out with that much rain falling on dry soil,” O’Connell says. “I was ready to run out if it seemed like houses were going down the hill.”

Saint Lucia, an island nation in the far East Caribbean, touches the Atlantic Ocean on the east and the Caribbean Sea on the west. Tropical storms often hit the island on their way to the Americas. As a UNC-Chapel Hill PhD student, O’Connell came to the island in September 2010 — just one month before Tomas made landfall — to begin an 18-month study of the social and environmental effects of the Fairtrade banana industry for her dissertation.

Bananas are one of the main crops on Saint Lucia because the plants are resistant to tumultuous weather. Farmers can harvest bananas in six months, which is short compared to the five-year harvest time of chocolate, a popular Caribbean export.

Though O’Connell knew all of this, it didn’t occur to her she would be on the island during a storm, much less a historic one.

Tomas formed in less than 24 hours. It was only a Category 1 hurricane, but it moved slowly, flooding Saint Lucia with 26 inches of water in 36 hours. To worsen an already dire situation, the island was in the midst of a years-long drought, and the rain easily washed away the bone-dry soil.

Once the rain stopped pounding, O’Connell sat in her apartment, which hadn’t slid off the hill as she feared. It was clear as she looked at her flooded floor, her neighbor’s roofless home, and the debris littering her neighborhood that nothing would be the same for a long time. With certain roads unpassable, the mountainous island was divided into thirds.

“One of the first things I did was take my research hat off as much as possible and minimize the way that I was a burden on any kind of resources or anybody’s time,” she says. “I tried to go out and help clean up people’s homes, clean up farms, clean up the community, and the neighborhood that I was in, where people had been affected more than I had.”

As soon as she could, O’Connell visited the farms she was studying. Landslides had torn asphalt away from roads on the island, reducing many to single lanes clinging to volcanic cliffs, slowing the distribution of resources and aid. Once she got to the farms, she found the fields covered in four feet of new sediment, loose and unreliable for farming. Flooding had planted a refrigerator in the middle of one field. She climbed trees to see how high the water had been by noting debris caught in the branches.

Due to the damage done to Saint Lucia, the World Meteorological Society retired Tomas as a hurricane name. Some residents went six months without running water. People were still making repairs as O’Connell finished her research 17 months later. That research barely resembled her initial plan and inspired a lasting interest in how communities recovered and what elements made recovery more difficult, particularly in rural and coastal areas. Her experience shapes her research, even now as an anthropology professor at UNC.

Before Tomas hit, O’Connell had researched Saint Lucia’s environmental quality to determine how effective the Fairtrade banana industry was at meeting peoples’ economic needs while reducing erosion and improving water quality. Any data she gathered after the hurricane would be incomparable. 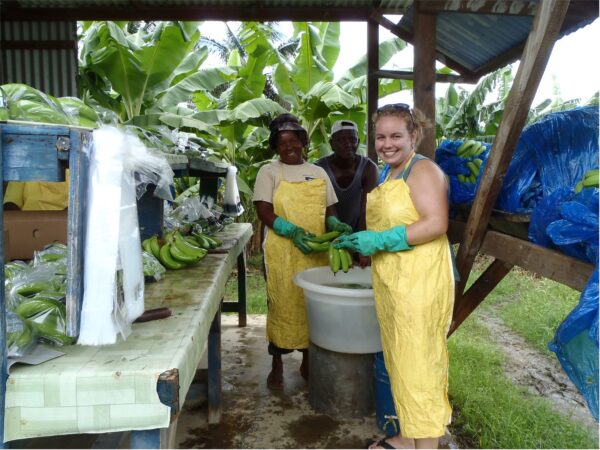 “I felt like I had spent years preparing to execute this research plan, and now it was blowing up in my face,” O’Connell says. “But one of the really important things about cultural anthropology is we’re studying real humans in real time. The best laid plans need to respond to what is important and resonant for the people you are working with and studying.”

She pivoted to watching banana farmers recover from the disaster and took note of how economic and social disadvantages created difficulties.

Recovery is a process that is easier for some than others. The farmers’ slow recovery was rooted in centuries-old colonial systems mired in exploitation. Most households had no savings because their businesses were in debt or barely breaking even.

An industry that never paid farmers fairly for production left them unable to save money to repair buildings or replace equipment. When their farms were ruined by Hurricane Tomas, farmers had no safety net.

As O’Connell gathered information, she shared it with farmer and Fairtrade groups to support them as they advocated for the assistance and relief their needed. They

Adjusting to the aftershocks

O’Connell left Saint Lucia in mid-2012 and finished her degree in 2014. She had many unanswered questions about what affects people’s recovery process. In 2017, after Hurricane Harvey ravaged U.S. Gulf Coast, she explored those questions in Texas.

In collaboration with Katherine E. Browne, an anthropology professor at Colorado State University, she interviewed people recovering from the disaster and found that financial resources alone don’t predict how well people will get back on their feet. Additional situational factors including age, health, and social relationships also play a role in peoples’ recovery process and experiences. 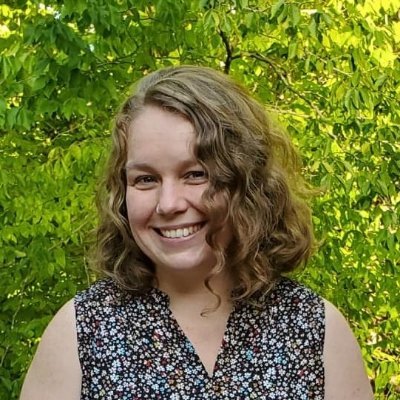 Over two years, O’Connell interviewed farmers and ranchers, people in the tourism industry, and Houston residents multiple times, tracking their gradual improvement. The research led to a paper examining how people could bridge the gap between academia and laypeople during disaster response and recovery.

O’Connell is one of many researchers in various disciplines who have been introduced to natural hazards through personal experience.  Some, like O’Connell, have lived through a storm or know someone who has, while others study populations that have been impacted along the way.

“To this day, when I know that hurricanes are making landfall, I worry,” O’Connell says. “Not because I’m personally afraid, but because I know what people are going to wake up to in the morning.”

When she’s interviewing disaster survivors, she lets them know she’s personally experienced a hurricane before, so she understands if they don’t want to talk about something or need a break. This often makes them feel more comfortable, she says.

O’Connell can’t directly help her interviewees, but she believes her research will help future communities and survivors overcome disaster. That’s what she focuses on today.

“I’m always humbled, amazed, and grateful for the generosity and openness with which disaster survivors approach participating in research. It’s really a testament to our human capacity to give,” O’Connell says. “You see amazing generosity and kindness, and so many people trying to help others in their community, even if they’ve also lost their own home.”

O’Connell is turning her research to the North Carolina coast. Since 1851, 387 tropical cyclones have made landfall here, and O’Connell wants to understand how communities, directly on the coast and adjacent to it, react in the aftermath of these storms.

“I’m using my early experience in Saint Lucia to help me understand why it’s important to do this work and trying to think about how we can make our coastal communities more resilient and mitigate their risk from storm events,” O’Connell says. “Then on the backside, we can understand how we can help them recover more equitably and quickly.”

Caela O’Connell is an assistant professor in the Department of Anthropology and the Environment, Ecology, and Energy Program within the UNC College of Arts & Sciences.