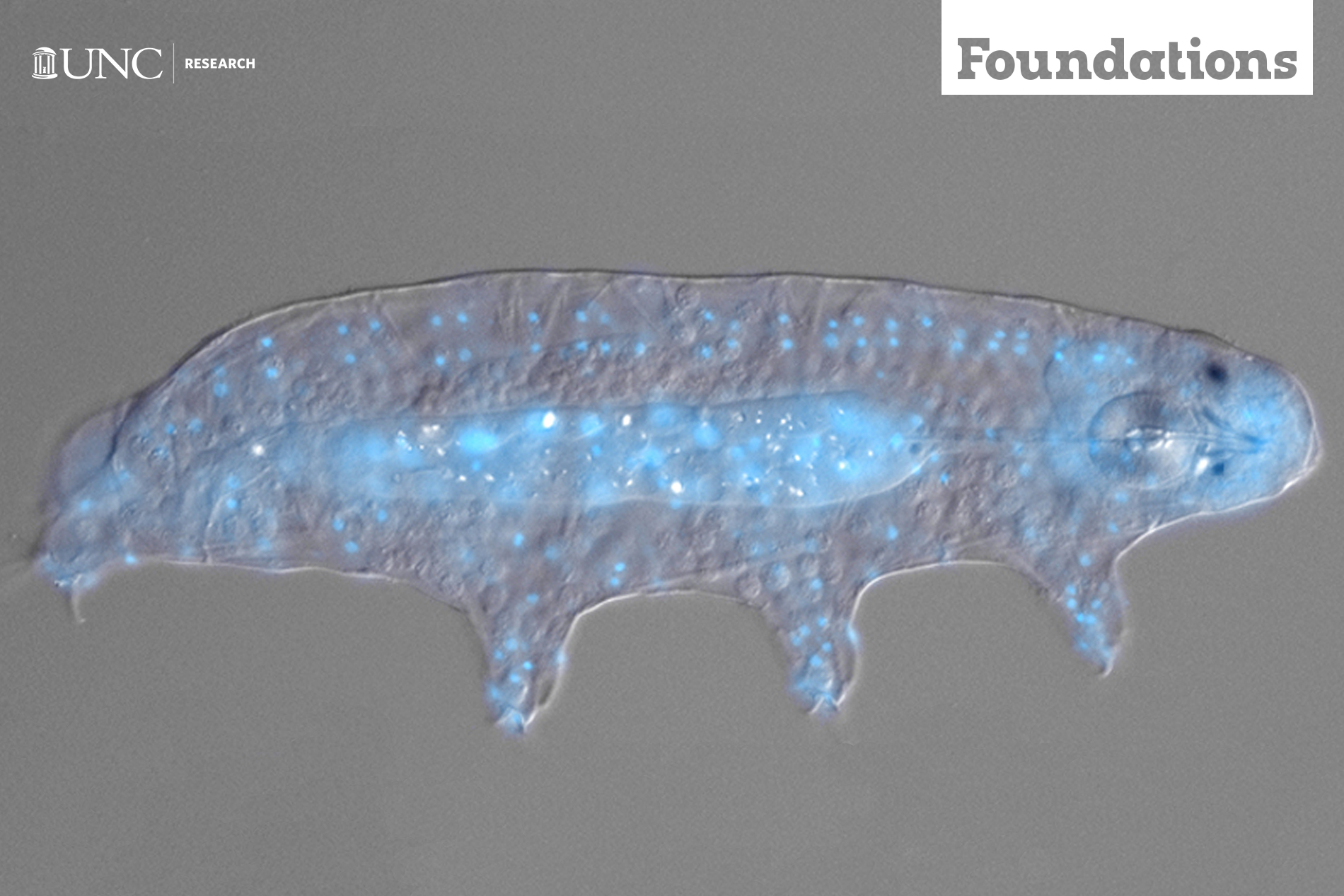 photo courtesy of the Goldstein Lab
Tardigrades are microscopic, opalescent organisms found everywhere from the moss in your backyard to the Antarctic tundra.
By Alyssa LaFaro
Earth | Foundations

“Yeah, of course!” Thomas Boothby crosses the room and approaches the petri dish-covered countertop that lines the entire left wall of his office in UNC’s Genome Sciences Building. He slides one of the plates under the microscope, adjusts the focus, and then steps aside.

“You see those little grains of rice moving around?” he asks. “Those are tardigrades.”

The opaque creatures move haphazardly, stumbling as they make their way from one side of the dish to the other. Gummy bears. Tiny blimps. Overstuffed couches with eight legs. This is how people describe these microscopic animals, which have been on our planet for about 500 million years. They’re like little sumo wrestlers pacing around before the next fight.

Even more fascinating than their appearance, tardigrades have an almost supernatural ability to survive extreme environments — from the bottom of the ocean, to the Antarctic tundra, the Sahara Desert, and even outer space.

While tardigrades can be found almost anywhere, even on the moss-covered tree in your backyard, the scientists who study them cannot. Boothby, a UNC biologist, is one of just a handful. “There are definitely labs out there that use tardigrades,” he says, “but they’re not often looking at the molecular processes for how they survive drying out.”

Boothby began studying tardigrades because they peaked his curiosity. “I’m fascinated by how certain organisms survive environmental extremes,” he says. Only later did he envision their potential for improving agriculture, treating human diseases, and preserving biologic samples like vaccines.

Boothby’s tardigrade research didn’t begin until he came to UNC in 2013. Before that, as a University of Maryland PhD student, he was studying one specific part of a fern’s life cycle. “Random, right?” he laughs. But there was something special about these plants that captured Boothby’s attention: In order to develop properly, they must dry out. 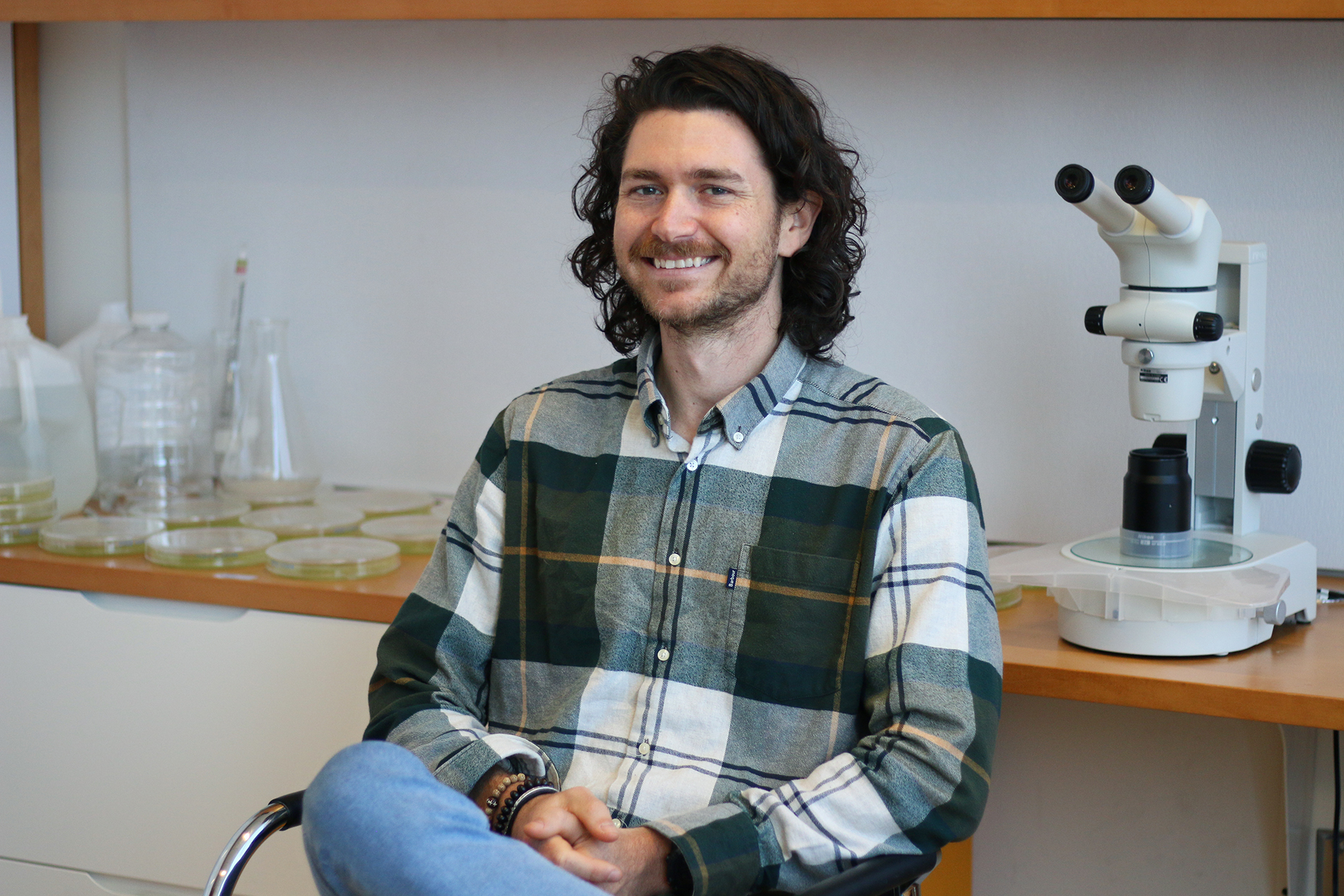 Thomas Boothby came to UNC in 2013 to uncover the resiliency of tardigrades for his postdoctoral research. He began this work in the lab of developmental biologist Bob Goldstein, who’s been studying tardigrades since 1999.

“Most plants, you know, you want to water them every week or whatever,” he says. “But these — if you do not let them dry up to the point where their leaves become crispy dust, then their spores never develop into new plants. And I just got really interested in how something can lose all that water and essentially die and protect itself in such a way that, when you add water back into the system, it can start going again. We can’t do that. Most other plants and animals can’t do that. How is that possible?”

For his postdoctoral research, Boothby wanted to move beyond plants and into an animal system. He chose tardigrades for a few reasons. At the time, there wasn’t much molecular or genetic research on them — there still isn’t, really — but there were tools readily available to study them. Plus, their closest relatives, fruit flies and nematodes, are familiar ones. “At the basic level, tardigrades are just like every other animal,” Boothby says. “They are multicellular, they have organ systems, they have a digestive track, they have a nervous system.”

So far, scientists have discovered more than 1,200 species of tardigrades. They are found on every continent, in all sorts of conditions from a parking lot puddle to the Himalayas. “Whenever someone goes out looking for a new species of tardigrades, they almost always find one,” Boothby says. They vary in size and diet, but one thing remains constant: They are survivors.

Most of Boothby’s research on tardigrades looks at the genomic changes that occur when they dry out. If humans can understand this process, Boothby believes, one future application could be engineering crops that can cope with the stresses of extreme environments like drought. But learning the mechanism behind how tardigrades do this is key. 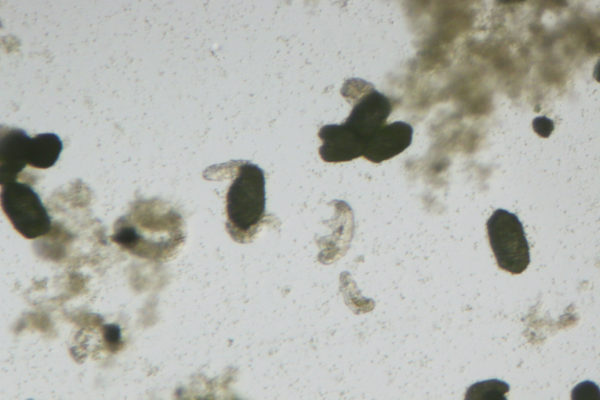 Most people have seen the highly detailed — and ridiculously adorable — tardigrade images captured with an electron microscope, but under a compound light microscope, these tiny animals look like opaque grains of rice.

Tardigrades have a unique family of genes that produce what are called intrinsically disordered proteins. Unlike other proteins, these lack a defined three-dimensional structure. “They’re like chains of beads that are floating around in space and constantly changing shape,” Boothby explains. “And when tardigrades dry out, they start producing these proteins like crazy.”

When Boothby prevented production of these proteins within tardigrades and then dried them out, the animals died. But when he inserted the genes that make those proteins into other organisms such as yeast, they became 100-times more resistant to drying out. “That was a pretty good indication that those proteins are necessary for surviving drying,” he says.

But how do these proteins accomplish this? With help from UNC chemist Gary Pielak, Boothby discovered that these proteins form a gel-like network that looks like a three-dimensional spiderweb, which, Boothby believes, prevents other proteins from unfolding and combining — an event that, in humans, can lead to diseases like Alzheimer’s.

“Tardigrades produce proteins that are, essentially, the same as the ones in humans,” Boothby points out. “But when their cells get heated up or frozen or dried out, they start producing these disordered proteins, which form interconnected gel fibers that encapsulate and protect the other proteins that would normally get broken by stress.”

This means tardigrade proteins might have the potential to treat diseases. At least, it’s a very distant possibility, according to Boothby. “The gels seem to keep proteins from unfolding and destabilizing, which in humans and other animals can lead to some diseases,” he says. “But, right now, applying the tardigrade proteins to prevent or reverse protein unfolding in human disease is just a dream.”

As Boothby continues to study the intricacies of this gel-formation process, he’s also researching how tardigrade proteins can dry out biological samples like blood, human tissue, and vaccines so that they don’t require refrigeration during storage and transport.

There is a product on the market that already does this: trehalose, an FDA-approved sugar that acts as a stabilizer. “Trehalose does something pretty similar to what we think the tardigrade proteins are doing, in that it basically encapsulates biological molecules and replaces the bonds those molecules normally make with water,” Boothby says.

“So if you have vaccines being transported in the back of a truck across some country in Sub-Saharan Africa — and it’s 79 degrees or warmer outside — the trehalose isn’t going to protect anything,” Boothby says.

If this works, humans could drastically reduce their carbon footprint. Electric refrigerators, for example,  use refrigerants called hydrofluorocarbons that, if not reduced by 2050, could account for 40 percent of the world’s carbon dioxide emissions. In 2009, Stanford University researchers completed a study that found if they replaced just 2,000 laboratory freezers with room-temperature storage technology, the university’s carbon footprint could be reduced by 18,000 metric tons over a 10-year period. That’s 1.83 million gallons of gasoline. Tardigrades could also reduce the cost of shipping and storing biomedical material. 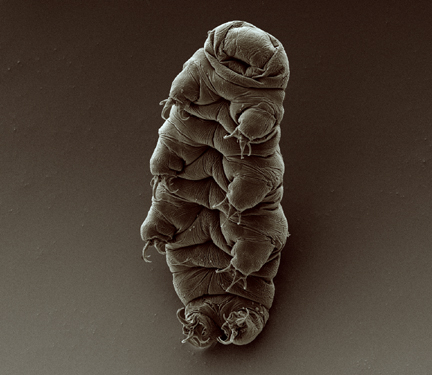 A scanning electron micrograph of an adult tardigrade, produced by the Goldstein Lab.

To infinity and beyond

In 2007, scientists launched tardigrades into space aboard a Russian satellite, and then exposed them to the extreme environment for 10 straight days. Well, surprise, they survived. But Boothby wants to know if multiple generations of a tardigrade family can exist during prolonged spaceflight. Can they reproduce during this event? And, if so, how will it affect their genetic makeup and development?

He is currently leading a NASA-funded project to answer these questions. They hope to produce four generations of tardigrades in space over the course of two months. The supply rocket that would carry them to the International Space Station is currently set to launch in the fall of 2019. Once aboard the orbiting laboratory, a mission specialist will conduct the experiment.

By looking at what types of genes tardigrades use during short- and long-term exposure to spaceflight, Boothby hopes to gain insights into how they prevent or repair the damage associated with being in that environment for long periods of time. This could lead to the development of treatments or counter-measures for astronauts based on the mechanisms tardigrades use to protect themselves.

Boothby is also interested in studying the other extreme environments tardigrades survive in: places like Antarctica, the depths of the ocean, or areas of high radiation. Understanding how they live through the latter could protect future astronauts bound for Mars and beyond.

After spending a chunk of his childhood in places like Kenya and Mozambique, Boothby believes tardigrades could be a game-changer for the difficult-to-reach parts of the world. It’s those early experiences in Africa that inspire him to continue this type of research.

“Living in Africa fueled my love for nature and exploration — and opened my eyes to the disparity on our planet,” he says. While there, the power would go out regularly, according to Boothby, and many people didn’t even have access to electricity, which is why it’s often difficult to bring life-saving treatments into the country. Keeping them cold is a huge challenge.

“In remote, under-developed, or emergency situations, this technology will be a real boon.”

Thomas Boothby is a research assistant professor in the Department of Chemistry within the UNC College of Arts & Sciences.

Gary Pielak is the Kenan Distinguished Professor of Chemistry, Biochemistry, and Biophysics in the Department of Chemistry within the UNC College of Arts & Sciences.