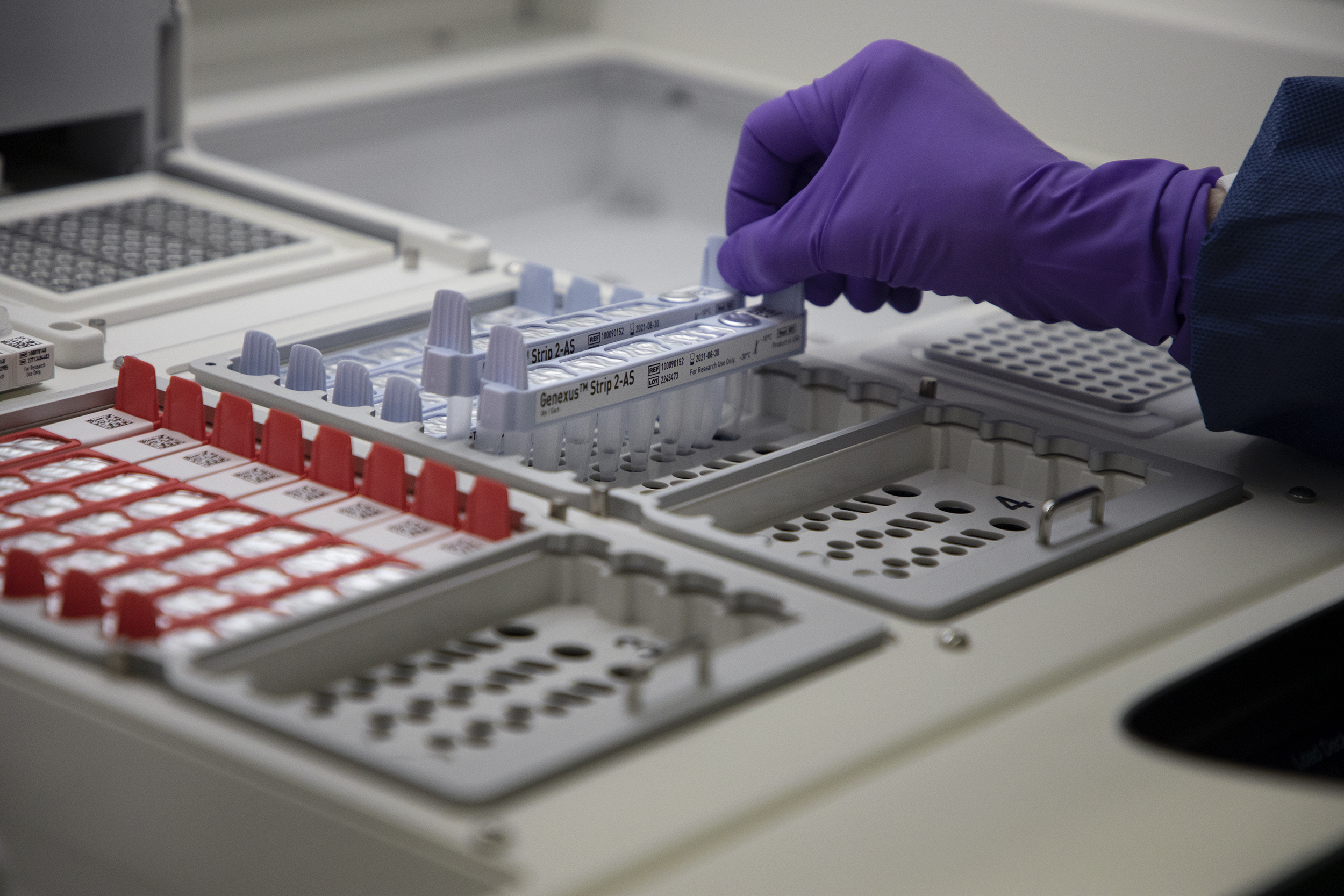 Linda Pluta prepares the Genexus Integrated Sequencer for genetic analysis of COVID-19 test samples (photo by Megan May).
By Megan May
Health

Trays of tiny vials in hand, Linda Pluta stands in front of a shoulder-height machine, waiting for it to complete an ultraviolet light cleaning cycle. The timer beeps, and a plexiglass display case smoothly rises. She loads it with dozens of trays, presses a button, and the glass quickly descends. Soon the device comes to life, humming with enough force to make everything in the room buzz and vibrate.

The Genexus Integrated Sequencer may sound like something from a science-fiction movie, but it’s an everyday tool in the Dittmer Lab at UNC, where researchers are tracking variants of SARS-CoV-2.

Since fall, scientists have discovered variants from the United Kingdom, South Africa, and Brazil. Since then, all three have been reported in the United States, and two have been found in North Carolina. Additionally, new variants have emerged in dozens of states throughout the U.S.

The issue isn’t that the virus is suddenly mutating — it’s that genetic sequencing has lagged far behind its spread. In the U.S., less than 1 percent of cumulative cases have been sequenced.

“That kind of makes you ask the question How many did we miss in between?” says Fernando Rene Moreira, a Baric Lab postdoctoral researcher in the UNC Department of Epidemiology.

As a virus replicates, mistakes are made in copying its genetic sequence. One theory suggests this is due to the frequency of virus replication; another points to factors in an individual host that cause these mistakes. It’s a classic example of evolution — if those changes are beneficial to the virus, they are more likely to persist as replication continues. The more SARS-CoV-2 spreads, and therefore replicates, the likelihood of these mutations increases.

“The number of infected people is tremendous, so there’s much more virus replication than ever before,” says Dirk Dittmer, a UNC professor of microbiology and immunology. “Every person that’s infected is a little test tube that allows the virus to change.”

While the terms “mutation” and “variant” may sound intimidating, it’s what viruses do. What concerns Dittmer and his colleagues are the number occurring at once.

“Normally when we sequence viruses we find one or two mutations in the spike protein from the week before,” he says. “The U.K. one had nine new changes. That’s a huge jump and why everyone is worried.”

UNC researchers Melissa Miller and Ralph Baric have joined Dittmer in a collaboration that acts as a SARS-CoV-2 surveillance pipeline.

Miller’s lab, which right now processes about 5,000 COVID-19 tests from UNC Health per week, sends positive samples to Dittmer’s, where they undergo genetic sequencing. Genomic anomalies are then passed to the Baric Lab for further analysis in human cells and animal models. The goal is not only to detect new variants, but also understand where they first emerged, their pervasiveness, and how they differ.

Prior to the pandemic, Dittmer’s work focused on viral cancers. Twenty percent of cancers are actually due to a virus. For example, the human papillomavirus can cause cervical cancer, and the herpes virus can lead to the cancer Kaposi’s sarcoma. A big part of this research involves genetic sequencing.

“We built the infrastructure in the cancer center to hunt for new viruses,” Dittmer says. “So when COVID came it was very easy for us to acquire samples from UNC Hospitals and start sequencing to identify which strains and variants are present in North Carolina.”

This endeavor started in May 2020. By July, the lab got a hit. Dittmer’s team was able to trace the variant to virus mutations from someone returning to North Carolina from Seattle, and another from a cruise to Italy. 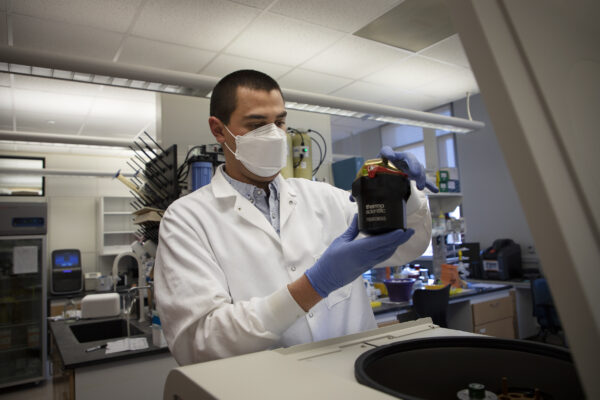 Fernando Rene Moreira, a postdoctoral researcher, works in the Baric Lab in the UNC Gillings School of Global Public Health (photo by Megan May).

Dubbed SARS-CoV-2 D614G, the variant was determined to be highly transmissible due to an increase of viral loads — the amount of virus — in the host and a mutation in the spike protein. This variant soon became dominant worldwide, and is ancestral to the current list of variants.

Analysis in the Baric Lab found the mutated spike protein — shaped like a “G” rather than the ancestral variant’s “D” shape —increases its ability to open and infect cells more efficiently. The good news is, thus far, that studies in animal models have shown while the variant is more infectious, it does not cause worse symptoms, and its mutation may actually make it more vulnerable to vaccines.

As new variants are discovered, the threats they pose remain largely unclear. “I’ll let you know in two years,” Moreira jokes. “Being trained in the sciences, you always have to wait for the data.”

Some current findings, though, do give insight into transmission and response to vaccines.

A recent study by researchers in the U.S. and U.K. reports the U.K. variant — B.1.1.7 — is between 43 and 90 percent more transmissible than the ancestral strain. Data analysis from the lab testing company, Helix, found that it has likely accounted for more than 20 percent of new U.S. cases as of early March 2021. If the trajectory continues, some think B.1.1.7 may be the dominant variant in the U.S. by the end of the month.

When it comes to vaccines, researchers believe that the U.K variant does not reduce the effectiveness of the Moderna of Pfizer shots. Data on the Novavax and AstraZeneca vaccines report efficacy rates of 85 and 74 percent, respectively. 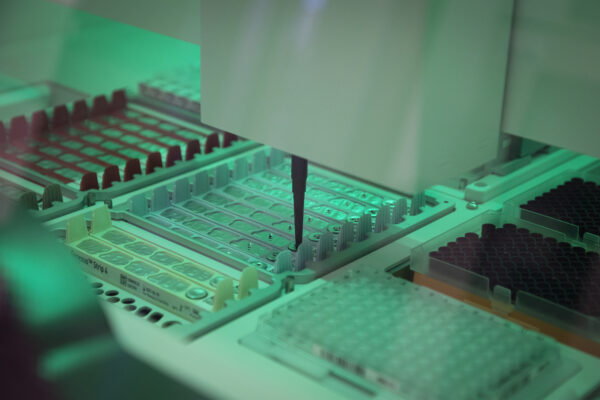 The Genexus Integrated Sequencer processes COVID-19 test samples in the Dittmer Lab (photo by Megan May).

Even with a reduction in efficacy, these vaccines are all proven to be very successful in fighting the virus and should not deter the public from vaccination, Dittmer says.

Importantly, the COVID-19 relief bill includes $1.75 billion dollars to better track and study SARS-CoV2 variants. Researchers are working to develop clearer answers, but need something not afforded to them during a pandemic — more time. While Miller’s lab processes thousands of COVID-19 tests per week, Dittmer’s can handle a maximum of 70. Once a sample containing mutations is passed to Baric’s lab, it can take months for analysis in human cells and animal models.

In the meantime, the best way to stop the emergence of new and potentially more dangerous variants is to stay vigilant with safety measures proven to stop the spread.

“It all depends on how good we are at continuing safety measures, which interrupt transmission,” Dittmer explains. “If you do that then the pool of actively replicating viruses becomes so small that new variants simply don’t happen.”

It’s advice that has been repeated time and time again, and has proven to work with the ancestral variant of SARS-CoV-2. Experts believe it will hold up against emerging variants. Wear a mask, stay socially distant, and get vaccinated. The more the public adheres to this advice, the more likely we’ll be able to get current and emerging variants under control.

Dirk Dittmer is a professor in the Department of Microbiology and Immunology within the UNC School of Medicine.

Melissa Miller is a professor of Pathology and Laboratory Medicine, director of the Clinical Molecular and Microbiology laboratories within the UNC School of Medicine.

Fernando Rene Moreira is a postdoctoral researcher in the Department of Epidemiology within the UNC Gillings School of Global Public Health.