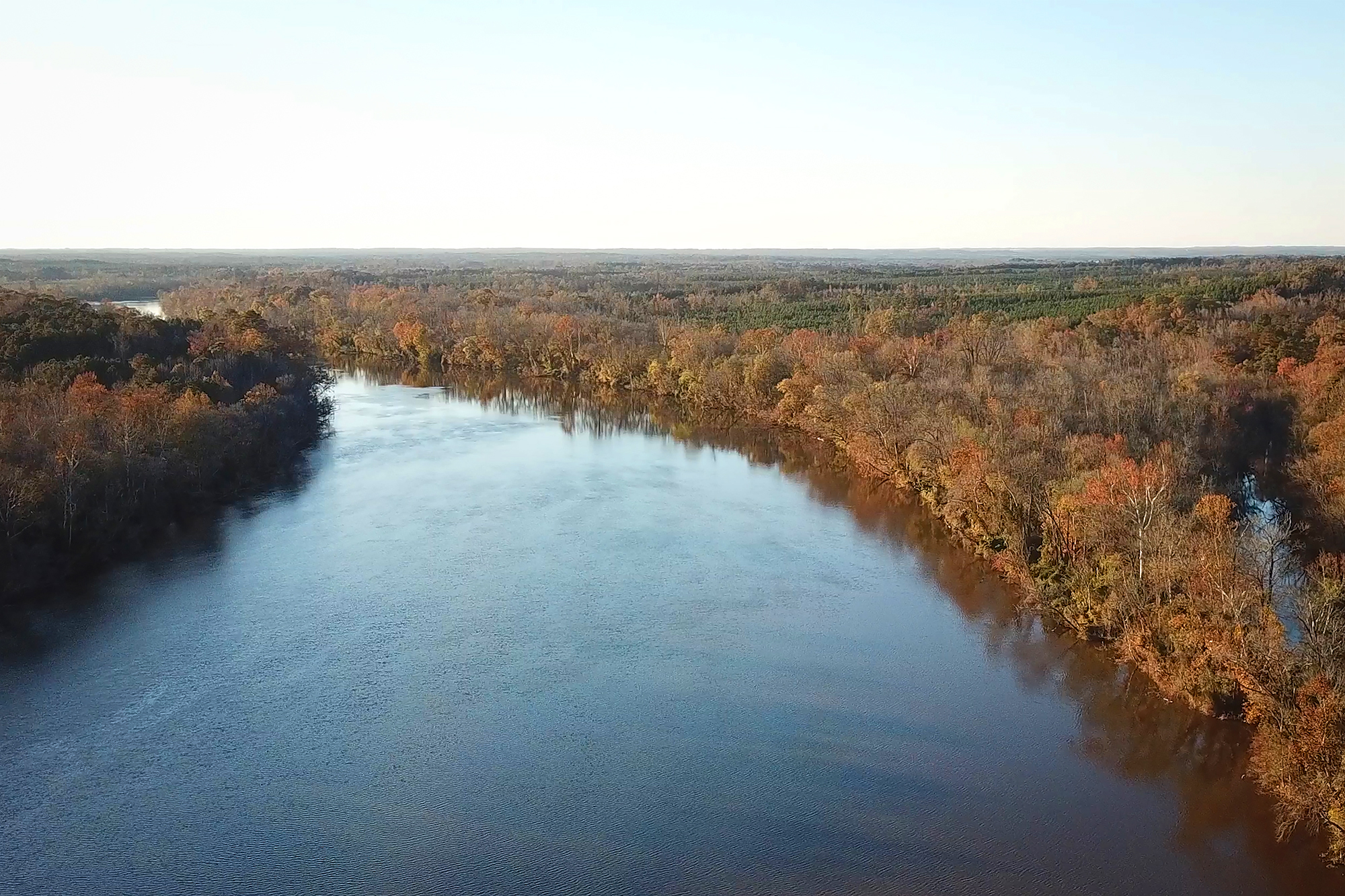 photo by Liah McPherson
The Cape Fear River is a 202-mile-long blackwater river that runs from Brickhaven to Wilmington and serves as a drinking water source for 1.5 million people.
By Sarah Loftus
Earth

A park ranger unlocks the gates of a chain-link fence. UNC professor Nathan Hall drives through in a pick-up truck carrying a rowboat and disassembled pieces of a weather station. Straight ahead, the Cape Fear River slides down a structure known as Lock and Dam #1, built over 100 years ago for commercial vessels to navigate the river, which runs 200 miles from central North Carolina to Wilmington.

The lock, a water elevator for boats, is rusty and rarely used these days. The dam has been replaced with a ramp of large rocks, allowing fish to swim upstream through the cascading water. Behind these structures is the drinking water source for several North Carolina counties.

In the past decade this critical water source has experienced more algal blooms, a rapid increase in a water body’s algae population. Some blooms contain harmful algae such as a type of cyanobacteria called Microcystis, which can release toxins that affect people’s health. Excessive algae in the water also makes water treatment more difficult and expensive.

Over the past few years, Hall has investigated the cause of these relatively new blooms. Now, his goal is to monitor weather and water temperatures in the river to see which conditions could predict when blooms will thrive. 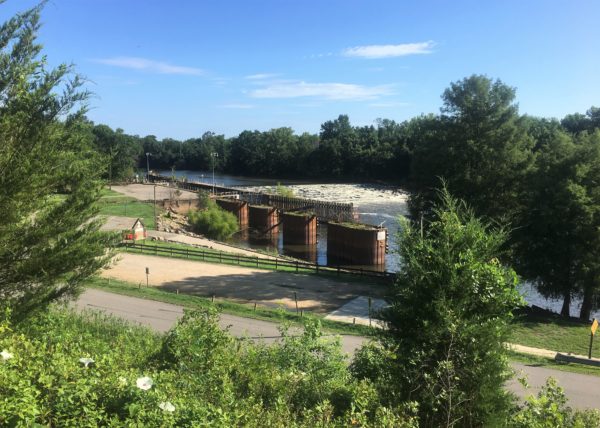 The Cape Fear River runs through Lock and Dam #1 in Riegelwood, North Carolina. The U.S. Army Corps of Engineers manages three lock and dam structures on the river. While no longer needed for ship traffic, the structures now collect public water supplies. (photo by Sarah Loftus)

Blooms are commonly triggered by excess nutrients in sources such as wastewater or fertilizers. But UNC researchers Stephen Whalen and Lindsay Dubbs previously discovered that the Cape Fear River is already saturated with enough nutrients for the growth of green algae, diatoms, and some harmful cyanobacteria. Hall’s findings show that droughts, which cause the river to flow slowly, fulfill the remaining conditions needed for a bloom.

Slow flow in warmer months allows the river’s surface to heat up, preventing mixing between warm surface water and cooler, denser water at the bottom of the river. This lack of blending, called stratification, traps algae in the heated surface where they can take advantage of warmth and sunlight to grow excessively over multiple days.

Hall created a model to simulate how small particles, like algae cells, move in the river.

Back in his office at UNC’s Institute for Marine Sciences (IMS) in Morehead City, he pulls up a visualization of the model on his desktop computer. He clicks a play button on the computer and a slew of green dots representing algae make their way across the screen, flowing downstream. In a fast flow scenario, the dots ping up and down the screen, moving between the top and bottom of the river. During a slow flow simulation, the dots stay in the upper portion of the screen as they move downstream.

“The model predicts the blooms pretty well,” Hall remarks, showing how visually reported algal blooms in the river match up with results from his model, which uses publicly available flow data from the U.S. Geological Survey and weather data from the Remote Automatic Weather Stations system.

Drought periods in 2019 have presented Hall with potential bloom conditions for study. He wants to see if weather measurements can be used to predict when stratification and blooms will happen, using Lock and Dam #1 as his study site.

Lock and Dam #1 is surrounded by a recreational area for fishing, boating, and picnicking. On this July morning, Hall installs weather monitoring equipment. With some drilling, hammering, and adjusting, he sets up the weather station in a grassy area next to the river with help from research technician Jeremy Braddy. The station consists of a 7-foot tall tripod with equipment attached for measuring wind, humidity, and light. 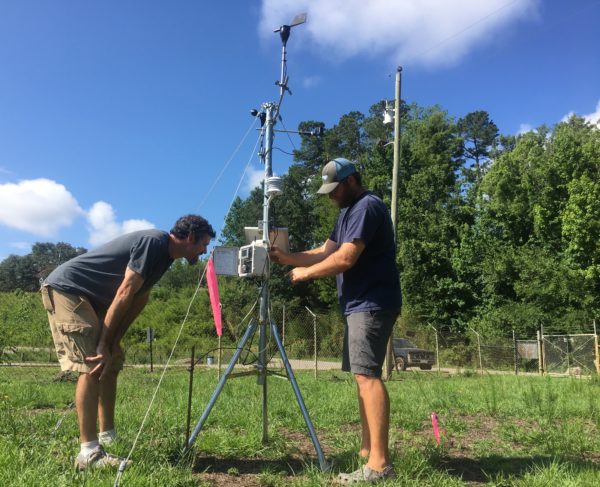 Nathan Hall and Jeremy Braddy finish assembling a weather station on the bank of the Cape Fear River. The station is powered by a solar panel and transmits data back to the researchers. (photo by Sarah Loftus)

Next, Hall and Braddy thread a string of temperature sensors through plastic pipes drilled with holes that let water pass through. The researchers paddle a small rowboat upstream, balancing one of the tall pipes between them.

Hall stands the pipes upright in the water and straps them to a structure near the entrance of the lock. With a temperature sensor at every half meter, their data will clearly show when thermal stratification occurs in the river and how deep the heated top layer reaches.

Along with setting up a weather station and temperature sensors, Hall and others such as the N.C. Department of Environmental Quality, Lower Cape Fear River Program, and Middle Cape Fear River Basin Association will periodically determine how much algae live in the river by measuring a pigment inside algae called chlorophyll-a.

The Cape Fear River serves as a drinking water source for 1.5 million people, and the cities that use it have dealt with other notorious contaminants like those released from the chemical manufacturing plant Chemours. Now, algae and their released toxins may be another issue that water treatment plants face. But if a harmful bloom arises, not all communities are able to remove these toxins during water treatment.

“We used to see smaller blooms. When it was real hot, you’d see a little green here and there, but never these major blooms we started seeing between 2007 and 2009,” says Chad Ham, the Water Resources Environmental Program Manager for Fayetteville Public Works Commission. Ham has worked with the river for 34 years and serves on multiple organizations that focus on the river’s water quality.

Fayetteville has never experienced a harmful algal bloom that releases toxins. But even if they did, their facilities are not equipped to treat them. The Public Works Commission is looking into design upgrades for the water treatment plant, Ham says.

Much farther downstream, Wilmington draws its water from behind Lock and Dam #1. The Sweeney Water Treatment Plant in Wilmington has one of the most thorough treatment processes in the country to deal with algae blooms, explains Ben Kearns, water treatment supervisor for the Cape Fear Public Utility Authority. While water treatment facilities regularly monitor intake water and potential contaminants, Kearns says that algae toxins have only recently become an operational consideration for plants with raw river water intakes.

Preventing algal blooms would be a more ideal solution to water-quality concerns and treatment costs. Results from Hall’s research may offer suggestions for how to predict and prevent blooms.

If Hall finds predictable patterns between weather, stratification, and blooms, then increasing river flow during predicted bloom conditions might prevent excessive algae growth. This could be achieved by temporarily opening the locks or releasing water from the start of the river at Jordan Lake, which is also managed by the U.S. Army Corps of Engineers (USACE).

More research will be needed to determine if those are effective solutions. With multiple stakeholders involved and many people relying on the river, any changes to release patterns would be a monumental, prolonged task.

The USACE releases water from Jordan Lake for water-quality purposes to send oxygenated water downstream, Dana Matics explains. As the Piedmont assistant operations project manager with the USACE, Matics points out that if release procedures changed, it could still take days or even a week for the water to reach an algal bloom — which may not have an impact at that point.

“Nathan’s research is an important piece of the puzzle,” Ham says. Predicting blooms based on relatively convenient measurements could be a large step forward in the state’s effort to manage algal blooms and water quality in this essential water source.

Jeremy Braddy is a research technician in the Paerl Lab at the UNC Institute of Marine Sciences.

Sarah Loftus is a communications specialist at the Institute of Marine Sciences. She is a 2019 graduate from the PhD program at Duke’s Nicholas School of the Environment.