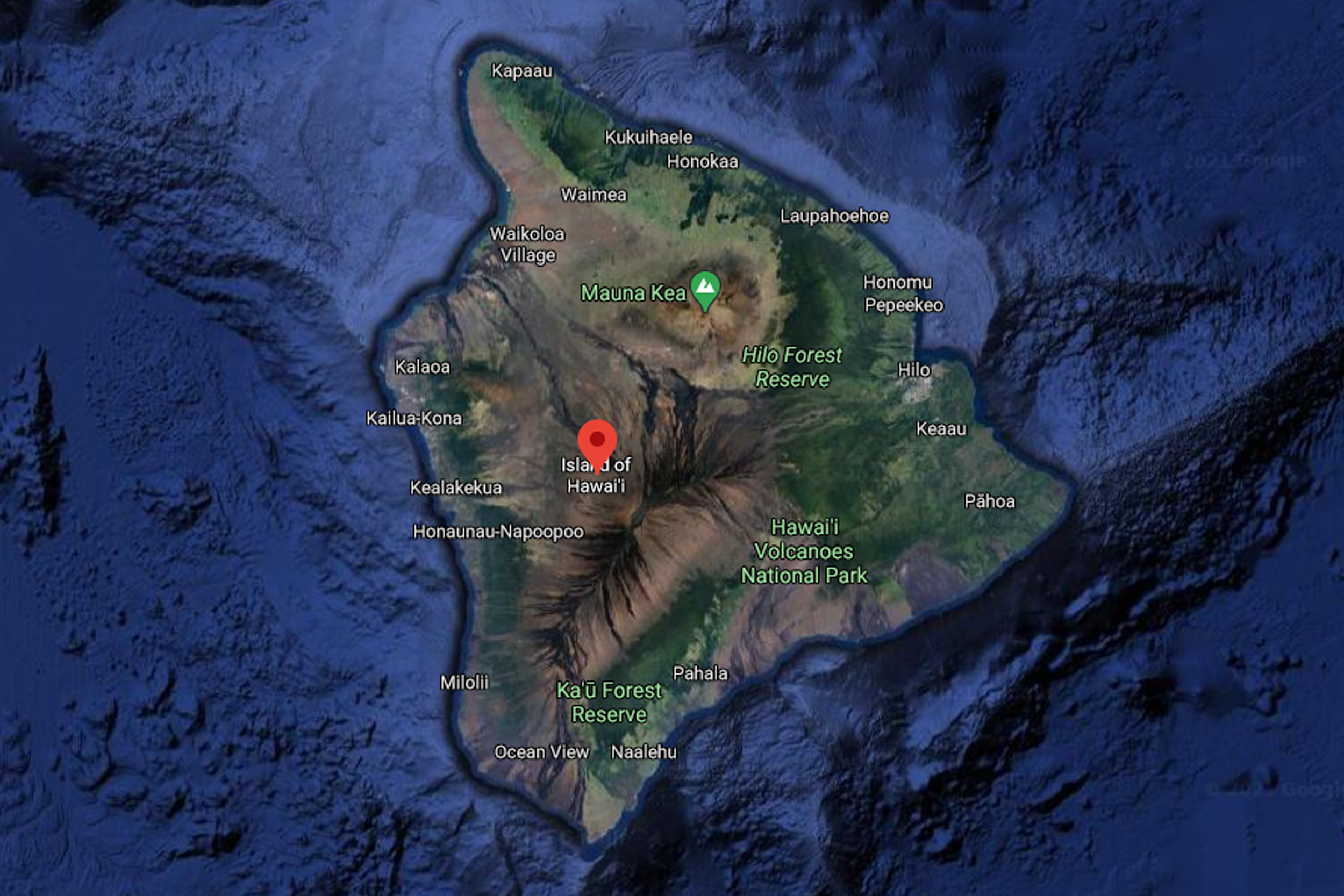 Hawaii Island is a geochemist's goldmine. It's where "fast climate change" occurs, according to Xiao-Ming Liu. The island’s five volcanoes form a barrier to moisture-laden trade winds, making the eastern side of the island wet and green and the western dry and desolate. (screenshot from Google Maps)
By Alyssa LaFaro
Earth

The northeastern corner of Hawaii’s big island is home to lush, tropical rainforests. But head south and the landscape grows dark, hard, and volcanic.  Even further south, the environment becomes barren and sand-like. The Kaʻū Desert is not considered a true desert because each year it receives 39 inches of rainfall — but that rain is acidic and prevents plant growth.

Hawaii’s diverse landscape makes it the perfect place to conduct geological research. UNC geochemist Xiao-Ming Liu goes there to study chemical weathering, when rocks erode from chemical reactions that occur between minerals and environmental factors like rain. Chemical weathering is the first stage in the production of soil.

Geochemists like Liu are chemists who study the earth. They are interested in the chemical composition of the planet’s soil and water to understand how it formed and evolved into what it is today. This kind of research can inform us about climate change, future earthquakes, and natural resources.

Liu, specifically, studies how chemical weathering influences climate and the evolution of the planet.

“In a rainforest, everything weathers fast because you have a lot of water and atmospheric CO2. But then there are deserts, where most of the time you don’t have rain and so rocks don’t weather,” Liu explains. “That’s why I like Hawaii. I can look at different climates in a short drive. I don’t have to go to the Amazon and then the Sahara.”

Imagine that Earth’s timescale — 4.5 billion years — is equivalent to a roll of toilet paper. The very last square would represent human life, about the last 200,000 years. That means most of the planet’s history is wrapped up in the rest of the roll.

Liu is interested in the middle of the roll, about 2 billion years ago, or what she calls Earth’s middle age. More specifically, she wants to pinpoint the oxygen levels at that time to understand how life eventually evolved. 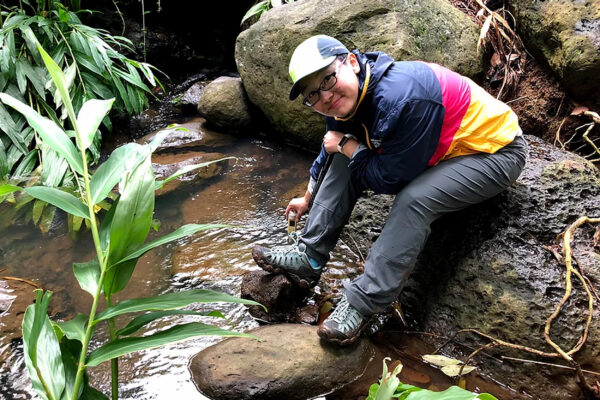 In her most recent paper, she predicts that only one percent of Earth’s atmosphere was made of oxygen in the middle of its life cycle — a time period known as the Proterozoic Eon. Today, that number is a hefty 21 percent. So what’s happened in the last 2 billion years and why does it matter now?

“People argue about the history of the oxygen level in the atmosphere because it has a lot of influence on the evolution of human life,” Liu says. “Without enough oxygen, we can’t have animals. We don’t exist. We take Earth’s current oxygen levels for granted.”

Liu studies what’s called the Great Oxidation Event, when cyanobacteria in the ocean began producing large amounts of oxygen through photosynthesis. As anaerobic microbes — microorganisms that don’t require oxygen to survive — began to die off, carbon dioxide levels plummeted and the climate began to change. This led to the first major ice ages in history, pushing existing life at the time to the brink of extinction, but, also, marking the start of life as we know it.

In her study, Liu and her lab analyzed data gathered from ancient limestone found in Great Slave Lake in Canada. In studying how much of the element cerium is in these rocks, they created a model to estimate Earth’s oxygen at this time period. Their findings support the idea that a major increase in oxygen occurred after the Great Oxidation Event.

This work helps verify hypotheses about the evolution of life during this time period. It also explains why protecting Earth’s current atmosphere is so vital. As carbon dioxide continues to release into the air and warm the climate — the opposite of what happened during the Great Oxidation Event — anaerobic bacteria have begun to grow again. We see this in the form of algal blooms in lakes and rivers. It’s important we take action now to reduce our carbon footprint.

“When I was in elementary school, carbon dioxide levels were about 30 parts per million (ppm),” Liu shares. “Today, that number has risen to 400 ppm. That means in 20 to 30 years, we’ve had a 30 percent increase is carbon dioxide. History will repeat itself. We must think about Earth’s history and try to be careful about our future.”

To understand how chemical weathering impacts the planet, Liu collects rocks and water from the places she travels to and brings those samples back to the lab for analysis.

Trapped inside those materials are elements like carbon and lithium. To find out what’s inside the rocks, Liu and her lab crush them into powder. Then, they apply heat and hydrofluoric acid, an extremely toxic chemical that dissolves silicate, the most common minerals found in rocks.

Once the rock is in liquid form, Liu sends it into a mass spectrometer to identify the elements within. It’s like giving a blood sample at the doctor, Liu says. A blood test can identify how much iron, calcium, and other necessary vitamins are in your body. The mass spectrometer analyzes the elemental concentrations within rocks, soil, and water.

Weathering is usually top-down, Liu says. Rocks on the planet’s surface experience more weathering and turn into soil. Below that sits a layer of loose rocky material called regolith, and even further down is bedrock.

In one study, Liu and PhD student Wenshuai Li measured lithium in rock and water samples from Kohala Mountain, the oldest volcano on the island of Hawaii. Lithium isotopes found within regolith can be used to trace surface weathering over time.

About 1 million years in age, Kohala has experienced many changes in the earth’s surface, including the reversal of the magnetic field about 780,000 years ago. The windward side of Kohala is wet and deeply eroded by stream valleys, while the leeward side is dry, making it an ideal site to study weathering.

By measuring how much lithium breaks down in the soil over time, Liu and Li discovered that plants affect weathering — a discovery that contradicts previous scientific beliefs. This likely occurs as part of the water cycle when plants pull lithium-rich water from the soil. That water moves from the roots to the leaves, where some of it evaporates into the air. Since plants don’t absorb lithium, the element remains intact and spreads throughout the soil during this process.

Liu is interested in studying the geochemical composition of other planets, especially Mars. She looks forward to the return of Mars 2020, NASA’s mission to collect Martian rocks and soils. If the mission is successful, this is the first time scientists will be able to analyze samples from the red planet.

Colonizing Mars is the next frontier, according to Liu. NASA’s Perseverance rover is slated to land on Mars later this week on February 18. The data collected from the mission will help scientists assess the habitability of the planet for future human missions.

In the meantime, Liu continues to focus on this planet.

“There is a classic saying in Earth science: ‘The present is the key to the past.’ The opposite is also true,” Liu says. “We want to understand Earth’s history to predict its future.”

Xiao-Ming Liu is an assistant professor of geochemistry in the Department of Geological Sciences within the UNC College of Arts & Sciences.