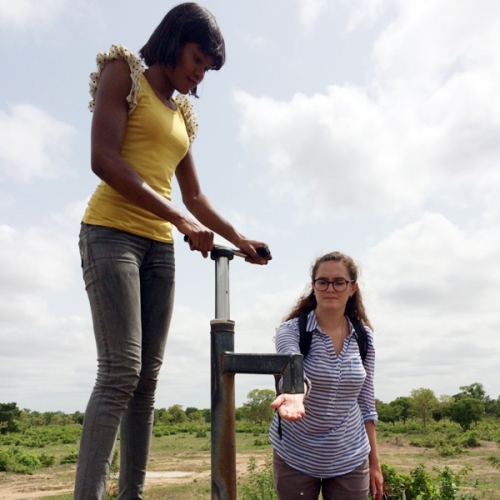 On a hot day in late July, Emma Kelly is walking through a field in Biringo Boke, a small village in northeastern Ghana. She comes to a well—a hole in the ground surrounded by a circle of rocks and packed mud—it looks like a small fire pit. The water contained in the well is the color of coffee.

Kelly, an undergraduate researcher at the UNC Water Institute, received a grant to spend nine weeks of her summer examining water systems in villages across Ghana. Working with World Vision, a Christian humanitarian aid organization, Kelly and five other researchers from the institute are evaluating the best ways to create access to clean water in remote places across Africa.

Bending down to examine the well, Kelly can see it was dug by hand, and it likely runs no more than 10 to 20 feet deep. The sandy brown water is almost certainly contaminated. This well is not the only water source here though. Another 30 minutes down the footpath is a borehole—a mechanically drilled well that extends more than 100 feet down into the ground. Because most water contamination across Africa is caused by fecal matter in surface soil, this deeper well is less likely to be contaminated.

But even with access to a borehole, some people still get their water from theis hand-dug well. “It would take over an hour to walk there and back,” Kelly says. “And that’s after they’ve been working in the fields, in the sun, all day. They value convenience over cleanliness.”

This is the kind of information that Kelly and the other researchers will include in their report to World Vision. Kelly credits the UNC Water Institute and her research advisor for the opportunity to do this kind of field work. “They’ve been really great about giving me more and more responsibility and opening a lot of doors for me,” Kelly says. When her advisor sent her an e-mail about an opening for an undergraduate research position doing field work in Ghana, she jumped on it immediately.

In each community, Kelly and her teammate meet with the local WASH (Water, Sanitation and Hygiene) committee, as well as community leaders and people who use the system. They ask about what works and what can be improved. “The amount of data we have is kind of crazy,” Kelly says.

One of the most important insights from the field, according to Kelly, is that a community feels a sense of ownership for their water system. “So if someone—an NGO or a government— comes in and says ‘here’s a water system’ but they don’t do anything further – a lot of communities end up sitting on broken systems,” she says.

“If no one says ‘this is my job’ (to fix the system) then the job never gets done.”

Another big insight that Kelly and her colleagues gained was the importance of education. “Before installing a new water system, you need to tell people why it’s important,” Kelly says. “These are people that work unimaginable hours in a hot Ghanaian field farming corn and potatoes. So if they have to choose between a stream that’s ten yards away or a borehole well that’s a 30 minute walk away—that’s where education is really important.”

As of right now, boreholes are one of the most sustainable, feasible options for communities like Biringo Boke. Ideally the community can do its own maintenance and one borehole well can serve up to 300 people. But boreholes aren’t perfect—between 40 and 60 percent of them break down within five years.

Most of the water systems that Kelly and the other team members are examining were installed by World Vision. According to the organization’s reports, each of the communities the teams visit is considered “highly successful” in the use and maintenance of their water system. But Kelly and the other researchers find some of the existing data for these villages is incorrect or not up to date. With the information collected in their interviews and focus groups, the researchers write a report to World Vision so that changes and improvements can be made to the systems.

Kelly first became interested in this kind of work when she traveled to the Dominican Republic after high school. “At home in New Jersey we have free tap water that comes out clean and you can depend on it. And the minute anything goes wrong with it, it gets shuts down and the problem gets fixed. But these people were living with so much less. They have so little income but they’re spending a large percentage of their income on bottled water because their infrastructure just doesn’t support clean, reliable drinking water from the tap.”

“The poorest people pay the most for what is a basic human right,” she says. After spending a year in the Dominican Republic, Kelly knew what she wanted to study.

“Because I’m from New Jersey people ask me why I chose to come to UNC,” Kelly says. When she was selecting her top choice university, UNC’s Water Institute and the School of Public Health were the selling points. “When I found out about the Water Institute here, and that Jamie Bartram was running it, and that it has such a good reputation, I decided to come and I just tried to get my foot in the door as soon as I got here.”

Kelly says she is enjoying doing qualitative research like the work she was doing in Ghana, but she plans to test the waters with other forms of research at UNC. “Eventually I’ll try my hand at some more lab work and see which one suits me better,” she says. “I’m still kind of exploring but I know that being a scientist is what I want to do.”

Emma Kelly (class of 2017) is majoring in Environmental Health Sciences in the School of Public Health.