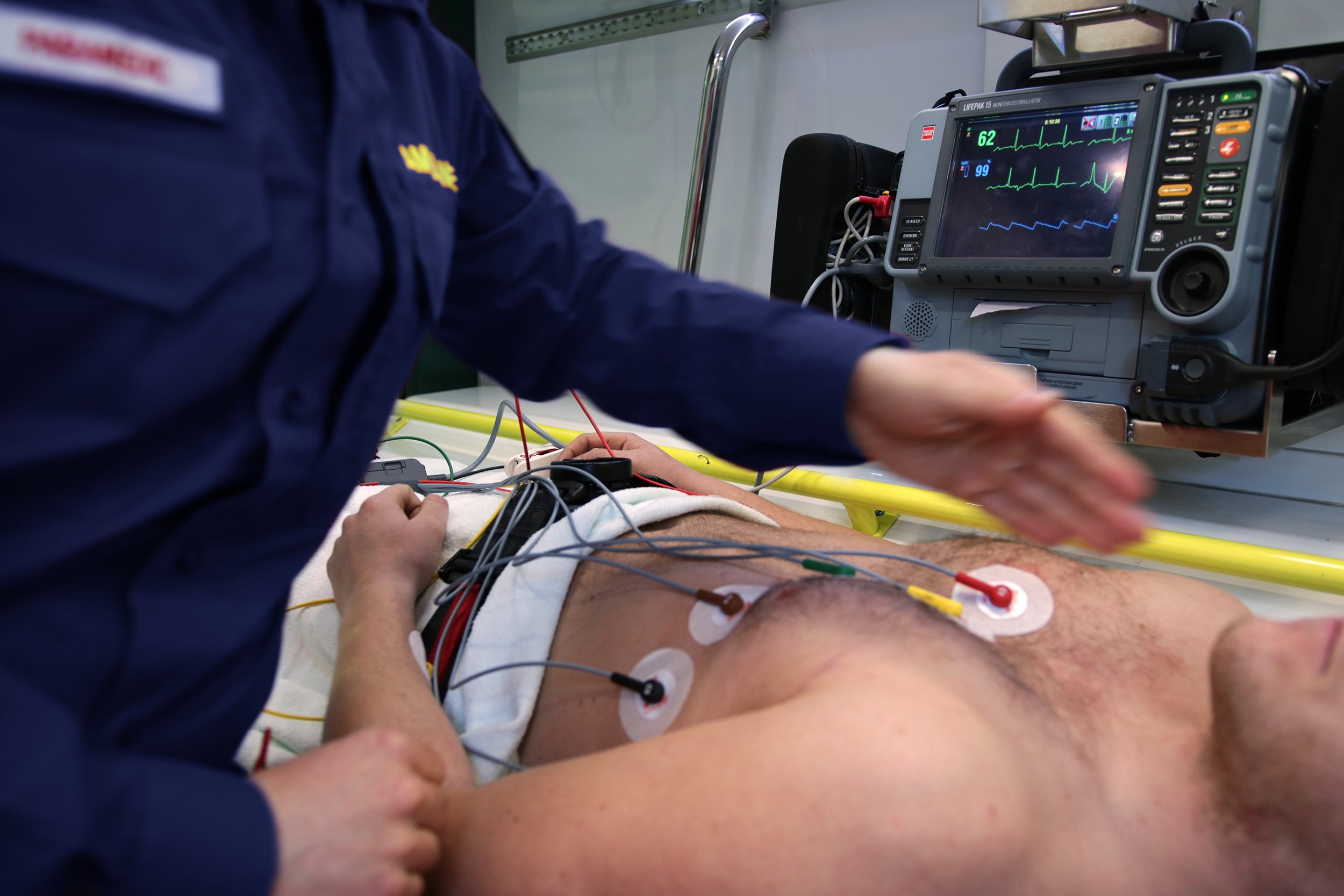 An EMT measures the heart rate of a patient on the way to the hospital. (photo by Pixabay)
By Alyssa LaFaro
Health

More than 2,400 years ago, the Ancient Greek physician Hippocrates learned he could stop bleeding by applying snow and ice to wounds. Fast-forward to the War of 1812, when Napoleon’s surgeon general, Baron Larrey, observed that soldiers who spent more time in the cold were less likely to die from it. Then, in 1952, two University of Minnesota doctors placed their patient on a bed of ice to stop blood circulation throughout the body — allowing them to perform the first successful open-heart surgery.

But it wasn’t until the 1980s that scientists realized the potential for a more extreme cold therapy. In a slew of cases from the 1960s and ’70s, a number of cold-water drowning victims had been revived — sometimes even an hour after death — and had most of their neurological function intact. A pattern began to evolve.

Enter Peter Safar, known as “the father of CPR” for co-developing the technique in the 1950s. He’s also credited with founding the first intensive care unit in the United States, as well as modern ambulance services. And he believed that lowering a patient’s body temperature could buy doctors some time — and give the patient a chance at survival — in the emergency room.

In 1980, an undergraduate student at Drew University named Laurence Katz wrote Safar a letter, sharing his admiration for the doctor and his research. Safar invited Katz to come work in his lab at the International Resuscitation Research Center in Pittsburgh. They spent years refining the therapy, which eventually became known as therapeutic hypothermia.

Katz joined UNC’s emergency department in 1996. In 2007, he started UNC Hospitals first therapeutic hypothermia program, collaborating with the cardiac intensive care unit (ICU) and its team of nurses to administer the therapy to patients who experienced out-of-hospital cardiac arrest.

Before 2000, if a patient arrived at a hospital unconscious after undergoing cardiac arrest, their chances of leaving alive and with all their brain function intact was slim to none. After being submitted to the ICU, doctors and nurses saw little hope for them, having seen cases like this almost always pan out the same way.

Then, two major studies were published, one led by a researcher who trained under Safar. Both papers demonstrated how this therapy — which involved cooling the body to about 33 degrees Celsius — improved the survival rate of these patients from less than 5 percent to nearly 50.

“This was the first time that nurses and doctors saw patients wake up and actually walk out of the hospital,” says Katz. “And it was that kind of impressive change in practice that drove me to push a program forward at UNC.”

Now, when a comatose patient comes into UNC Hospitals, doctors and nurses decide if they’re a good candidate for therapeutic hypothermia — and they must act quickly. The therapy, now called targeted temperature management (TTM), is most successful when administered within six hours of the patient’s arrest.

Once the procedure is confirmed, nurses use a machine called the Arctic Sun and attach a series of cooling pads to the patient, whose temperature will slowly lower for the next 24 hours. The patient stays cooled for about 12 hours and then must be warmed back up just as delicately.

“We want to avoid the development of high-temperature fevers, which we think are also the cause of a lot of the brain injury that occurs,” says Joseph Rossi, director of the UNC Cardiac Catherization Lab.

With nearly 360,000 Americans experiencing out-of-hospital cardiac arrest each year, this therapy is a game-changer — and could have even more potential if harnessed in the right way. Endeavors covered this program in the Spring 2011 issue, but it’s since expanded into different departments to help more people with a variety of diseases.

Searching for a drug

Some cooling happens naturally in our bodies. Every day, our temperatures fluctuate and are usually lower in the morning and higher in the late afternoon and evening. The biggest drop usually occurs when we sleep: Our temperatures are 0.1 to 0.2 degrees lower than normal. This is why we shiver and sweat: Our bodies are trying to maintain a steady temperature.

In contrast, hibernating animals like bears can reset their body temperature in winter from 98.6°F to 93°F, a phenomenon called regulated hypothermia. What chemicals in the brain control this process?

That’s what Katz has been trying to uncover for the past decade. He began by reading all the papers he could find on bears, homing in on the chemicals used by their brains to induce hibernation and lower body temperature. In collaboration with Christopher Gordon, a researcher at the Environmental Protection Agency who coined the term “regulated hypothermia,” he developed and patented a drug called neurotensin. 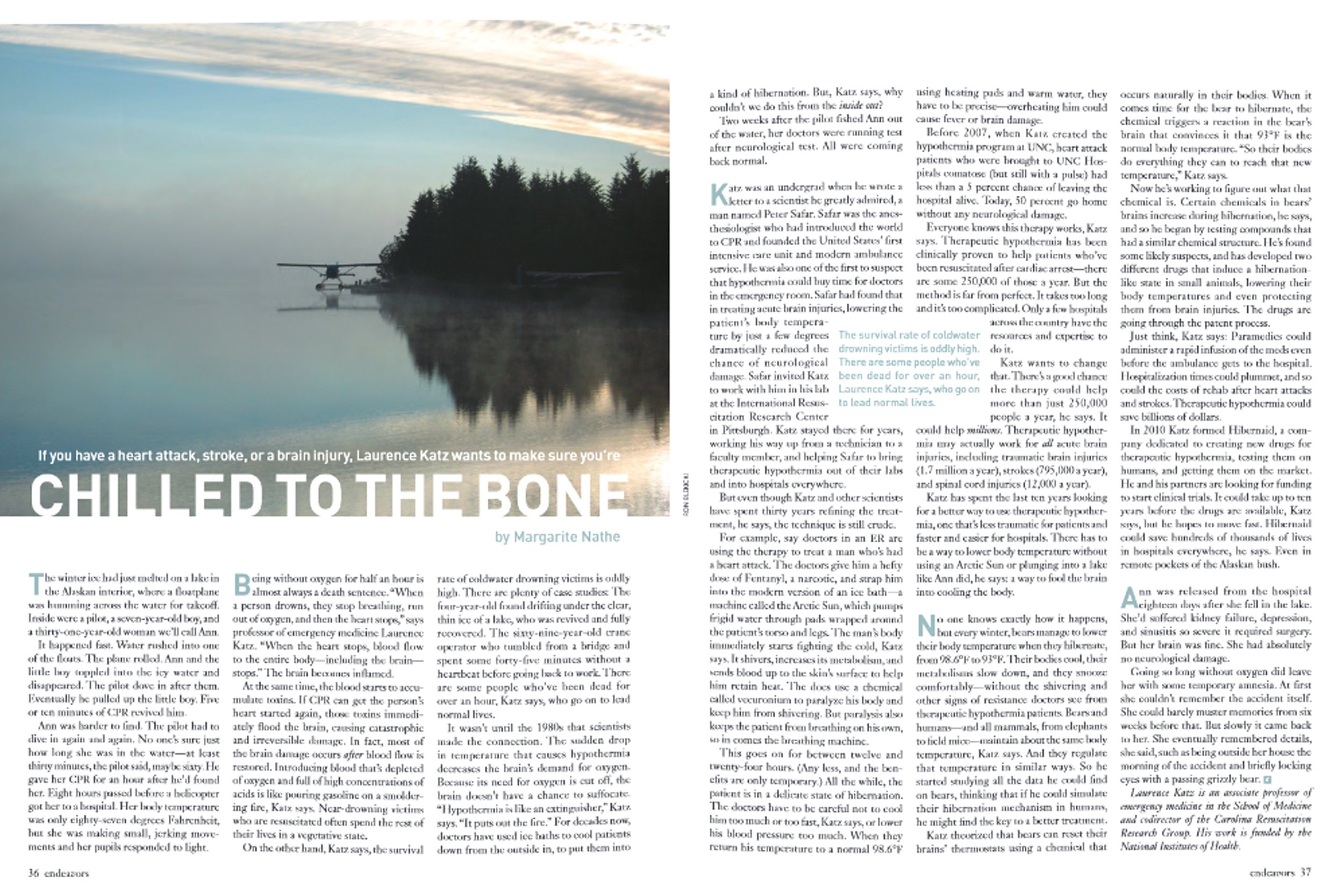 In the lab, the drug did exactly as intended: It lowered body temperature while protecting the brain. After a few years of testing it, Katz realized how similar its structure was to alcohol. Because ethanol is cheap and widely available, he began to experiment with it and found, after combining it with two other drugs already on the market, it could safely lower body temperature for 12 hours.

“That’s when I realized how exciting the work I was doing was and that this could be a patentable combination therapy,” Katz says.

In 2010, Katz created a spinoff company called Hibernaid, which has spent the past decade working to induce hypothermia without the need for a cooling machine. While Katz is no longer CEO, the company continues to test his ethanol combination therapy and is partnering with researchers overseas and at the University of Pittsburgh to start a clinical trial.

“If they can lower body temperature in healthy volunteers, then they will have no problem doing it in the ICU,” Katz says.

The potential of such a drug is huge. It would allow paramedics to administer it before arrival at the emergency room, could decrease time spent in the hospital, and could lower the cost of rehab after heart attacks and strokes.

While the technology Katz began using in 2007 is the same today, the protocols surrounding when to administer the therapy have evolved. Back then, the therapy was only applied to patients who experienced “shockable heart rhythms” — abnormal rhythms that can often be returned to normal by administering an electrical shock with a defibrillator. Now, it can be used with patients who experience “unshockable heart rhythms.” These are more severe forms of cardiac arrest such as asystole, when the heart stops working completely, and pulseless electrical activity, an extreme drop in blood pressure.

Previously, the standard temperature to cool patients to was about 33°C (91.4°F). While that temperature is still used for certain cases, the cardiac ICU also uses a higher temperature of 36°C (96.8°F), which is a little less dangerous.

While cardiac arrest caused by an abnormal heart rhythm is still the most common reason for administering TTM, Rossi points out that it is also used when patients experience arrest due to events like drug overdose and aspiration. It can also benefit people who experience strokes, traumatic brain injuries, and spinal cord injuries — but more research is needed.

Katz also collaborated with providers in the neonatology department to help them administer the therapy to newborns who experience suffocation during and after birth. Like adults, these small patients need to be cooled within six hours, but are wrapped in a cooling blanket — called a Blanketrol — versus a series of pads. They are cooled for 72 hours at 33.5°C.

The department cooled its first patient in 2008, and one year later, partnered with Duke as a joint study site for the therapy through the Neonatal Research Network.

“The goal with babies is to prevent further damage,” says Karen Wood, director of the UNC Newborn Critical Care Center and the Pediatric Transport Program. “If they don’t have enough oxygen at birth, they have a high acid load that prevents their pulmonary artery from dilating. We’re trying to fix that and make it better.”

Wood is frank about the side effects of cooling infants: If you cool them too much or warm them too fast, their blood pressure risks a sudden drop. The cold temperatures also cause inflammation that leads to skin cell death — but that ends up being a minor symptom when the procedure is successful. Each year, the neonatology unit receives 12 to 15 patients from other hospitals who need the therapy.

A few years ago, a UNC emergency department nurse was walking to work when they heard someone yell for help — and turned to see a girl standing next to a vehicle with a man unconscious at the steering wheel. The nurse ran to them, pulled the man out of the car, and began administering compressions until an ambulance arrived.

After this man arrived at the hospital, it was clear to Brooke McLaughlin — the nurse overseeing the TTM protocols in the cardiac ICU — that he was a candidate for the therapy. Upon rewarming, he woke up pretty quickly and recovered surprisingly fast, McLaughlin remembers.

McLaughlin has been administering TTM since 2012 and now trains other nurses in the department on how to use it. While the therapy is challenging, she finds it fascinating and rewarding. The man who lost consciousness in his car, for example, could have died or lost a portion of his brain function without the therapy.

“We never figured out why he cardiac arrested,” she says. “He was pretty healthy, probably in his 50s. [TTM] is not a fix-all for everybody, but it is an amazing therapy if we’ve got it on the right patients to be able to make a meaningful recovery.”

While the cardiac ICU administers TTM to about 20 patients each year, UNC Hospitals has served as a resource for other hospitals looking to implement a program.

In the last decade, Katz has helped push the therapy to hospitals in the Southeast. He has worked especially close with doctors and nurses at WakeMed in Raleigh, which now cools about 450 cardiac arrest patients a year.

“It’s a good program,” Katz stresses. “I think it’s saved a lot of patients whose brains and hearts are too good to die. And I really commend the cardiologists and nurses that maintain it.”

Laurence Katz is a professor of emergency medicine in the UNC School of Medicine and an adjunct professor in the Department of Exercise and Sport Science within the UNC College of Arts & Sciences.

Joseph Rossi is an associate professor of medicine in the Division of Cardiology within the UNC School of Medicine. He is also director of the Cardiac Catherization Lab and co-director of Cardiology Clinical Trials within UNC Hospitals.

Karen Wood is a professor in the Division of Neonatal-Perinatal Medicine within the UNC School of Medicine. She is also the director of the Newborn Critical Care Center and the Pediatric Transport Program at UNC Hospitals.