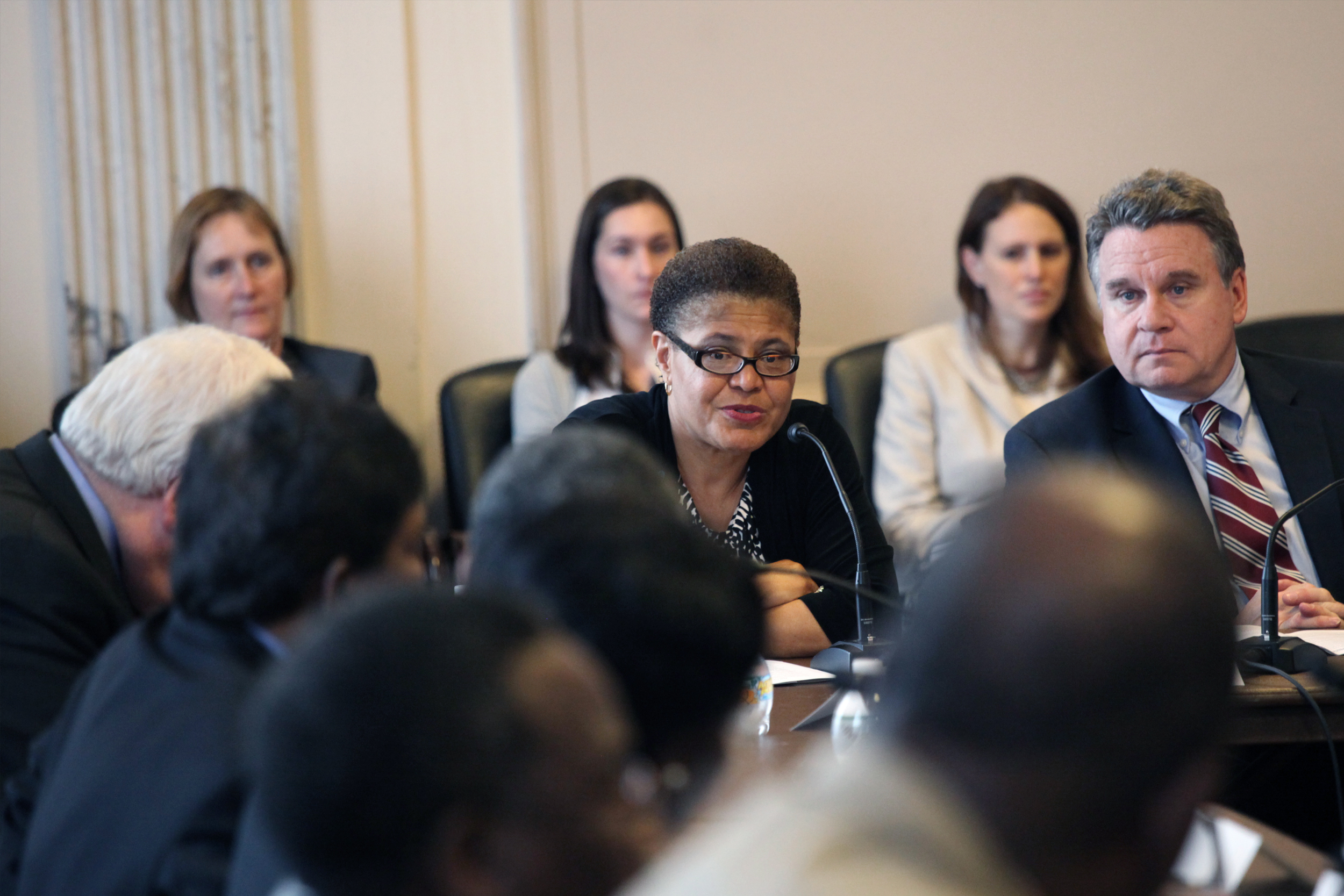 In 2008, Karen Bass became the 67th Speaker of the California State Assembly, making her the first African American woman in U.S. history to serve as a speaker of a state legislative body. One decade later, she was elected chair of the Congressional Black Caucus, one of the most powerful Black political organizations in the country. (photo courtesy of Wikimedia Commons/Senator Chris Coons)
By Alyssa LaFaro
Society

In 1969, Henry Frye — North Carolina’s first Black legislator since 1899 — pushed forth two pieces of legislation that would impact Black people across the state. The first was removal of a literacy test that disproportionately blocked African Americans from voting. The second encouraged the deletion of clauses from business contracts that prevent underrepresented groups from participating in economic development opportunities. While both measures were initially voted down, each one eventually came to fruition.

Seven years later, six Black legislators sat on the North Carolina General Assembly. At that time, they fought other assembly members over closing the law school at North Carolina Central University, a historically Black university, and pushed for a $6.2 million appropriation to improve and expand the school. The funding came through and the school celebrated its 80th anniversary in August 2020.

Black representation in the N.C. General Assembly continued to grow and, by 1984, it had 16 Black legislators.

“When you’re a historically marginalized group politically, seeing yourself reflected in government matters,” says UNC political scientist Christopher Clark. “It changes the narrative about who belongs.”

And it changes the narrative for the people you represent, adds Clark, who’s been researching these topics for a little over a decade. He focuses on state legislatures, specifically, because of their immense impact on laws affecting criminal justice, education, election administration, social welfare, taxation, and infrastructure.

In his recent book, “Gaining Voice: The Causes and Consequences of Black Representation in the American States,” Clark argues that Black political involvement hinges on the “Black seat share,” or the proportion of African Americans within a state legislature, and the formation of Black caucuses, which lend more power to affecting policy.

“By African Americans serving in state legislatures, the group would be able to feast from the table — not merely settle for crumbs,” he writes in his book.

Clark isn’t just interested in Black representation in state government. He’s drawn to underrepresented groups, in general — particularly women, who make up more than 50 percent of the nation’s population but only 29.3 percent of state legislature seats.

Representation of Latinos, the second-fastest-growing demographic in America, is even more scant, Clark points out. Comprising 18 percent of the total U.S. population, Latinos hold only 9 percent of seats in the U.S. House of Representatives.

While representation varies among these groups, Clark stresses their shared struggle: They need more seats at the table.

Black representation in politics is unique, Clark says, because most African Americans identify as Democrats, whereas women and Latino people support both political parties. This, he believes, stems back to the Civil Rights Act of 1964, passed by President Lyndon B. Johnson. 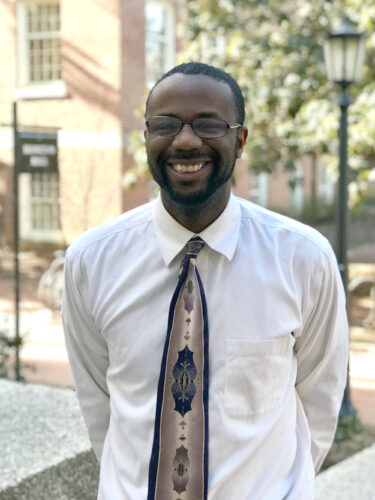 Clark has been studying diversity representation in state legislatures for more than a decade.

Not only did Johnson, a Democrat, approve perhaps the most important civil rights legislation in American history, but he actively supported it. At a special congressional meeting held just five days after John F. Kennedy’s assassination, Johnson urged the bill’s passing. “We have talked long enough in this country about equal rights,” he said. “We have talked for 100 years or more. It is time now to write the next chapter, and to write it in the books of law.”

For the first time in history, Black Americans felt like they had a party, according to Clark.

“Even in 1960, if you look at Kennedy [a Democrat] and Nixon [a Republican], Nixon had a clear level of support,” he says. “Because the Democratic Party wasn’t as pro-civil rights, you actually had a fair number of Blacks voting for Republican candidates. And then in 1964, all of that shifts.”

As time went on, the parties began to redefine their ideologies. After passage of the Voting Rights Act of 1965, which prohibits racial discrimination in voting, many Southern white conservatives left the Democratic Party to become Republicans. Then, during the 1968 election, Richard Nixon and his political strategist Kevin Phillips employed the “Southern strategy,” which increased support among white voters in the South by using coded appeals to racism against African Americans. For the next three decades, many Southern states became swing states as politicians continued to use race as way to polarize the parties.

“If we want to increase the number of Black people in office, we need them to win as Republicans,” he says. “But also, the party platform of the GOP needs to change for this to happen, to be more welcoming to matters of civil rights and racial justice.”

Another way to increase representation is to get non-Black voters to elect Black legislators, most of whom represent districts with large Black populations.

There are huge benefits to having more Black people in state legislatures, including improvements in voting rights, criminal justice reform, and spending on public education. But there are downsides, too, Clark says. In states with Democratic control of the legislature and higher rates of Black representation, there is less support for social welfare programs. Clark attributes this to backlash.

“When Democrats are in control of the legislature and Black seat share is high,” he writes in his book, “non-Black Democrats fear that if they are perceived as too generous on welfare, they will be punished at the polls by non-Black voters, individuals who prefer that government resources be devoted to other matters or at the very least not be devoted to a group that [they see as] undeserving of government assistance.”

But there might be a way to counter this: through the formation of caucuses.

In his book, Clark explains how caucuses — supporters of a specific political party who back delegates for elections — increases power in state legislatures. The Congressional Black Caucus (CBC), which formed in 1971, is considered one of the “most visible and powerful Black political organizations in the country,” writes Clark.

The CBC influenced passage of the Comprehensive Anti-Apartheid Act of 1986 and has played a large role in reforming the criminal justice system, combatting voter suppression, expanding access to education and health care, and strengthening protections for workers.

Thirty-two state legislative Black caucuses formed between 1966 and 1986. These bodies provide African American legislators with political information, emotional support, and additional power to push policy. Even more important, according to Clark, is that they allow Black legislators to remain cohesive.

“It becomes difficult to advocate for Black interests as more Blacks serve in the state legislature,” he writes. “Encouraging the group to create a caucus [allows] Blacks [to] act in a manner that best advances the interests of African Americans.”

Changing the culture for women

Getting more women elected is complicated, according to Clark, because it not only requires more women to run for office but a cultural change about who is electable. In the 2020 presidential election, for example, many people questioned the electability of Elizabeth Warren, the senior U.S. Senator of Massachusetts. Since announcing her candidacy, article after article questioned whether a woman could actually win the presidency. While research shows that when women run for office they are just as likely as men to win, the debate over whether women are electable is a burden men don’t have to deal with — plus, drawing attention to bias can actually reinforce it.

“When do we ever ask whether or not a man is electable because he’s man?” Clark says. “Two things need to change: Gender attitudes toward women and parties’ recruitment of women.”

In a new project, Clark is working with Mahoney and Purdue University political scientist Nadia Brown to understand Black women’s role in caucuses, how they serve as bridges between these organizations and Congress, and how they are distinct from Black male and white female legislators. For the first time in his research career, Clark will get to interview subjects and admits he is excited to learn about this process from Mahoney and Brown.

“I’m one of those ‘hope springs eternal’ people, and I think that allows me to be who I am as a Black man in this world,” he says. “We can either sit back and let things be how they are, or we can be intentional and take this knowledge and do something about it. If the end goal is to make the world a better place, to achieve some justice — how do we do that? That’s something I think about a lot.”

Christopher Clark is an associate professor in the Department of Political Science within the UNC College of Arts & Sciences.