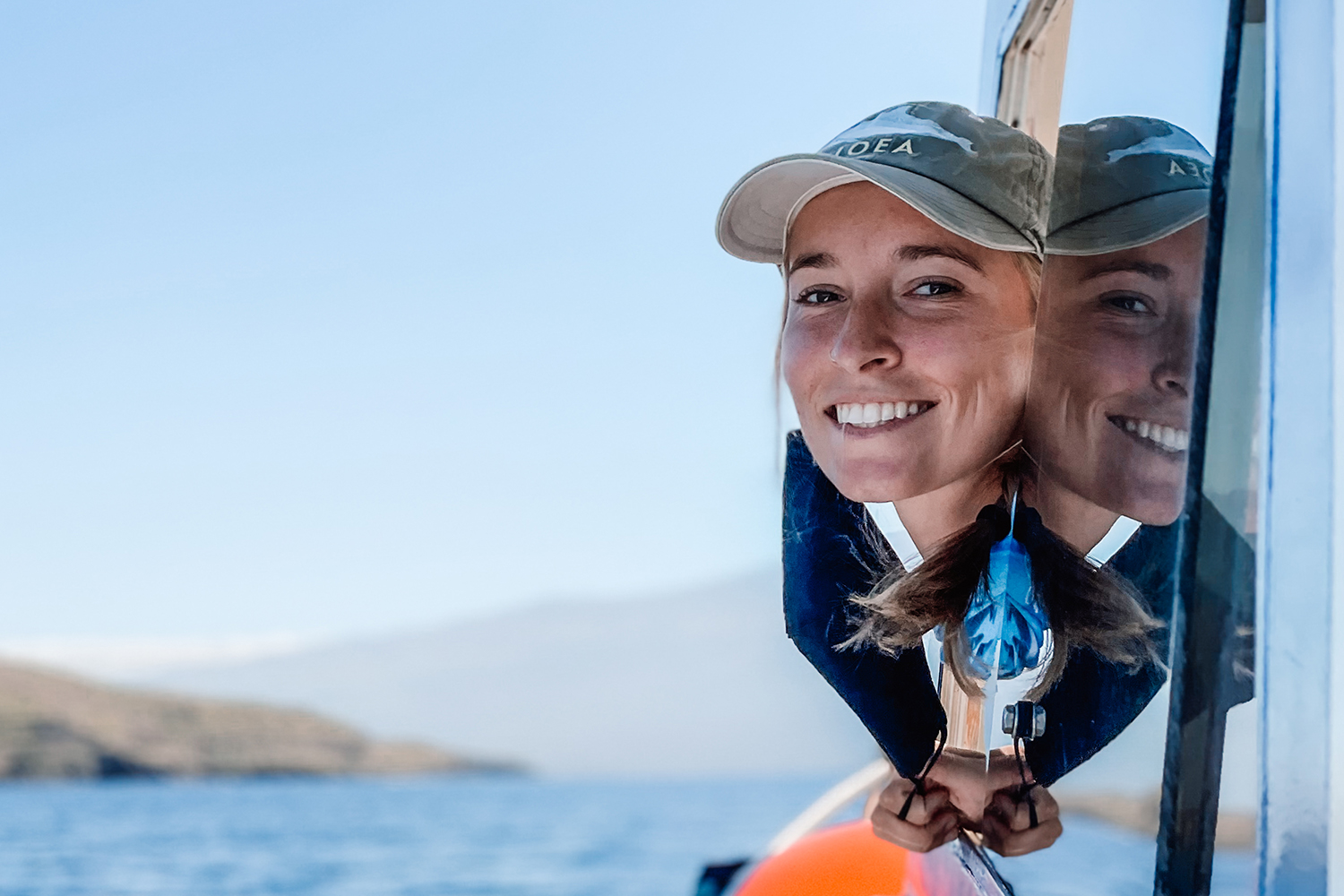 Graduate student Liah McPherson has used drones to record the lives of dolphins and whales — and her time as an undergraduate researcher at UNC-Chapel Hill helped set her on her way. (photo courtesy of Liah McPherson)
By Alyssa LaFaro
Earth

Liah McPherson’s Instagram page looks like an adventurer’s dream. It overflows with pictures of dolphins and beaches, whales and oceans, penguins and icebergs. Occasionally you see a few with her, showing off her giant smile. In one photo, she stands on the bow of a ship covered in snow. In another, a volcano erupts behind her. Many show her floating in the middle of the ocean, perfectly at peace and surrounded by hues of blue, practicing one of her favorite sports: freediving.

“Earth is crammed with heaven,” reads the caption on her picture of Oʻahu’s South Shore during golden hour. 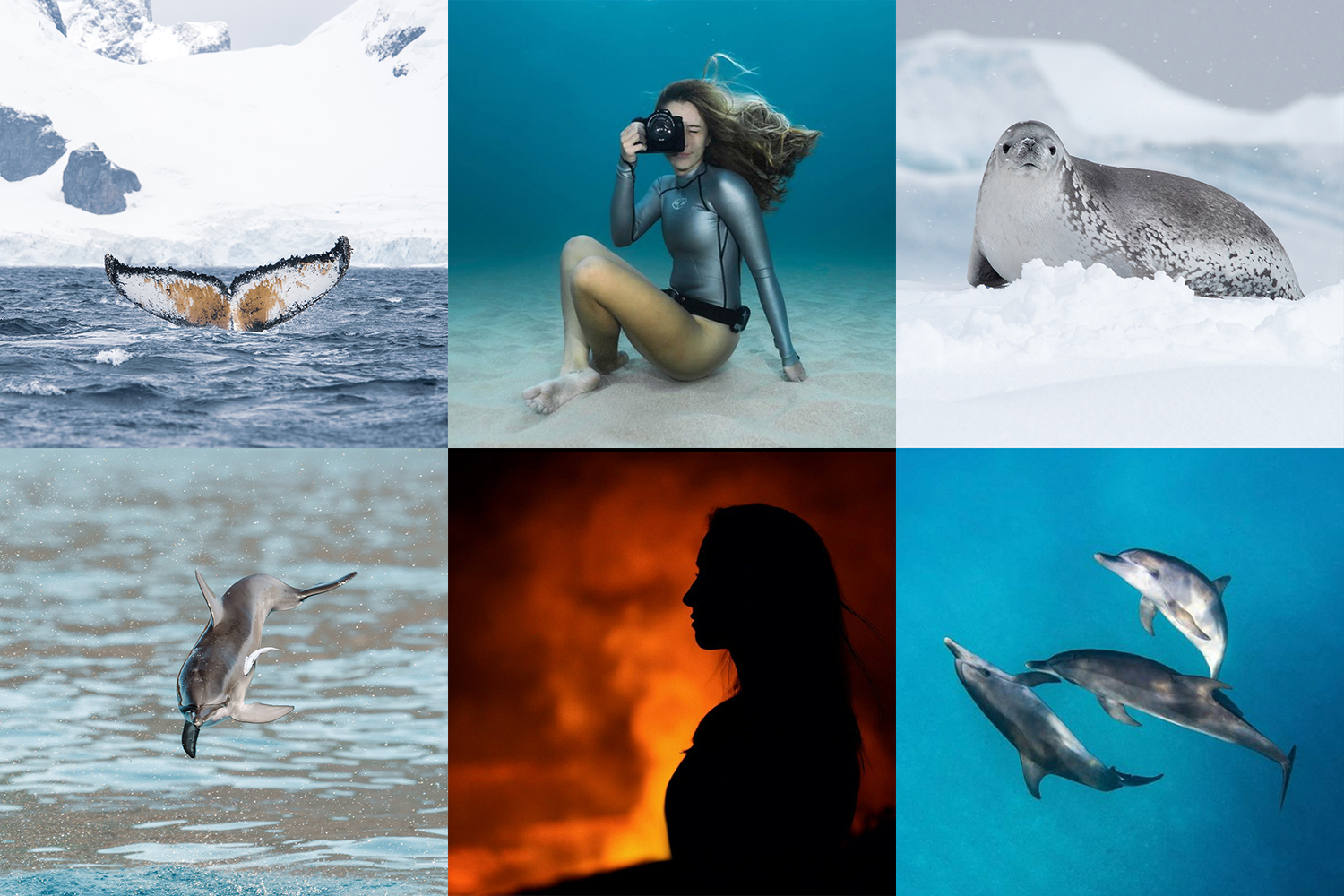 As a second-year master’s student in the marine biology graduate program at the University of Hawaiʻi at Mānoa, McPherson studies a population of spinner dolphins on the west side of Oʻahu. She assesses how many there are and their ages and uses DSLR photography and a drone to capture this data. She admits that field work is not always photogenic, and it often includes completing purchase orders for equipment and various other “things that make me want to pull my hair out,” she says with a laugh.

But this project in Hawaiʻi is the first one she can take full ownership of — and that’s what makes it truly beautiful.

“I have done it all,” she says. “From designing the research methodology, to coordinating with the marina, to finding and training my own interns to help me out, to driving the boat. It’s not just collecting and analyzing data; it’s all the set-up and logistics. That was all new to me and challenging at first. But now it feels really good to know I can create and execute a project.” 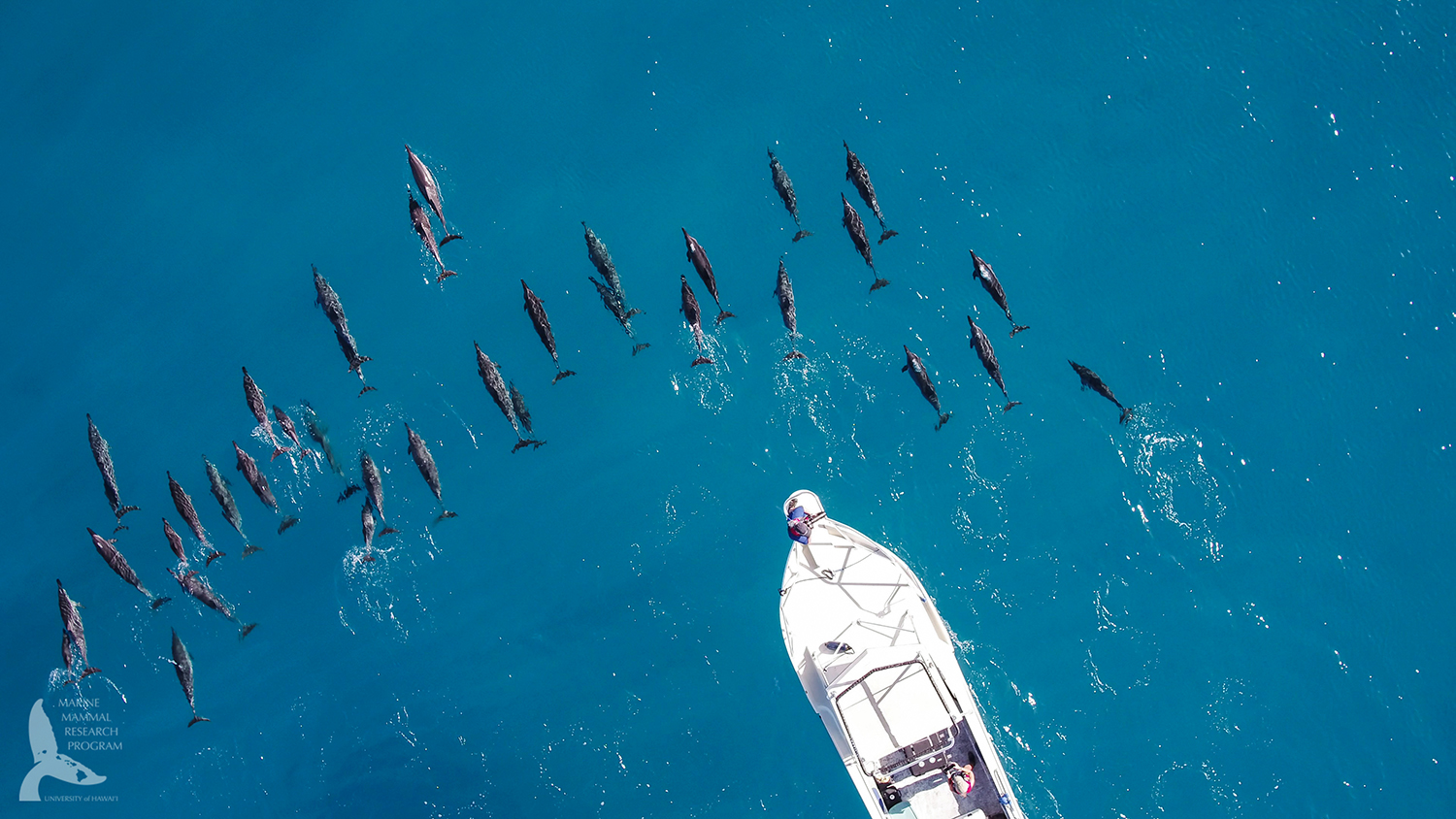 McPherson took this drone photo while conducting her dolphin project on the west coast of O’ahu. Her research assistant captures photos from the bow. (photo by Liah McPherson and taken under NMFS permit 21476)

Most recently, McPherson took that experience to Antarctica, where she spent six weeks helping a research team fly drones over whales to collect data.

And she got to all of these places with help from UNC-Chapel Hill, where she graduated from in 2019 with a dual degree in biology and animal behavior and a minor in marine science. During that time, McPherson wrote a personal account for Endeavors on her research with the Wild Dolphin Project and proceeded to work as a science communication intern for the magazine.

A love for cameras and dolphins

She doesn’t know exactly when or how it started, but when McPherson was a small child, she began drawing pictures of dolphins, even though she grew up nowhere near them in snowy Syracuse, New York — a land of freshwater lakes, not the saline-rich oceans cetaceans prefer.

But when she was 8, her parents moved her and her siblings to the Outer Banks. At age 14, she began volunteering with the Outer Banks Center for Dolphin Research, where she first learned how photo identification is used to monitor dolphins. Around the same time, she inherited a Nikon D300 from a family friend and began experimenting with photography.

“I was discovering this love for photography and seeing how it could actually be used for science,” she says.

But what really changed McPherson’s life is a book: “Dolphin Diaries” by Denise Herzing. Herzing leads the Wild Dolphin Project, a nonprofit scientific research organization that studies and reports on a specific pod of free-ranging Atlantic spotted dolphins in the Bahamas. McPherson was so inspired by Herzing’s book that she applied to be an intern with the project and began working with them when she was a junior in high school. Just before her junior year at UNC, Herzing invited her to be a field assistant for the summer season. 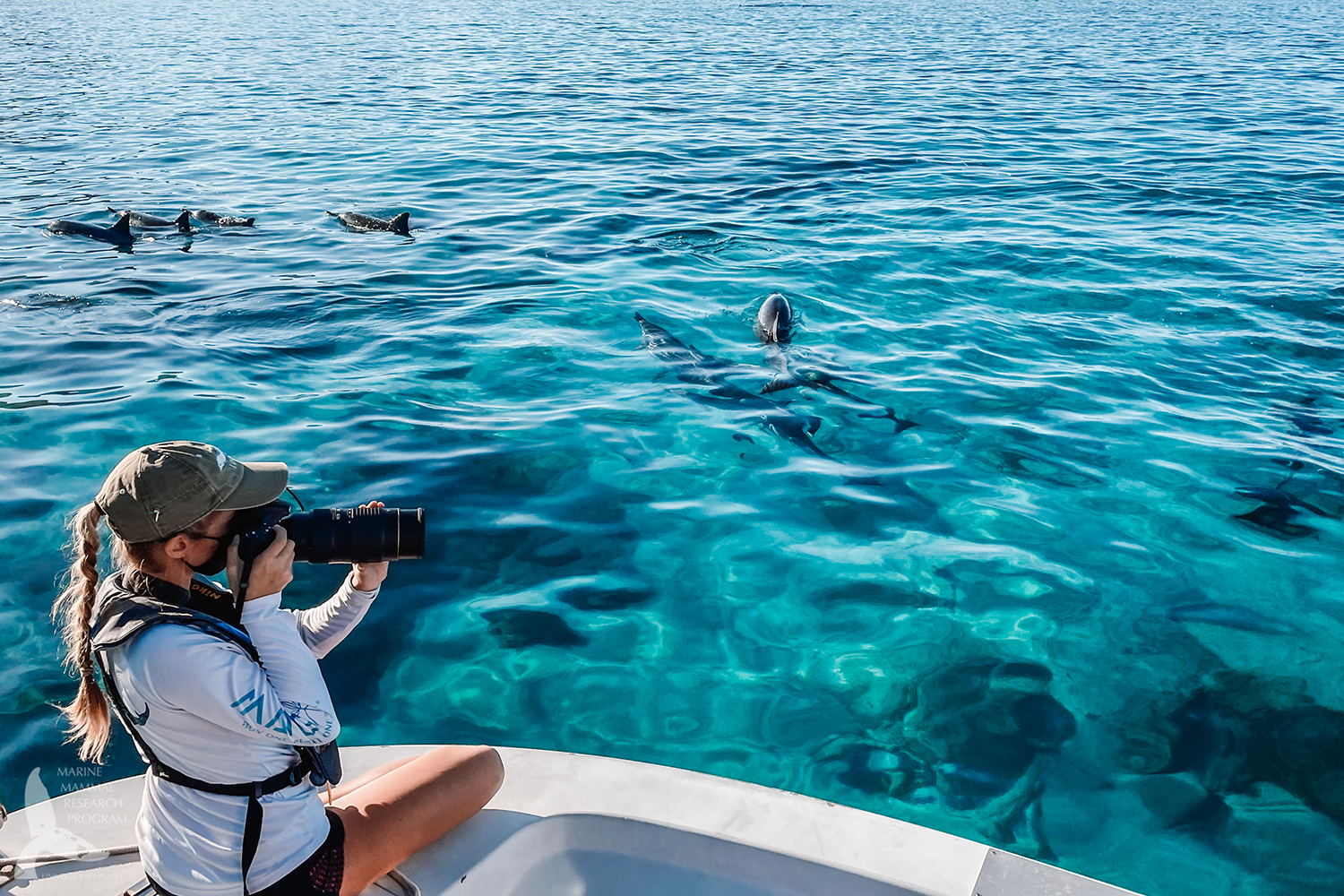 McPherson photographs dolphins on the west coast of Oʻahu for her master’s project. (photo courtesy of Liah McPherson and taken under NMFS permit 21476)

McPherson combined her love for dolphins with her research at Carolina. First, she learned about the scientific process while working in Adrian Marchetti’s phytoplankton lab during her first two years at UNC. Then, under the guidance of biologist Catherine Lohmann, she completed a senior honors thesis on the effectiveness of drones for studying dolphin behavior. She also used the interdisciplinary studies option to craft a second major for herself in animal behavior.

“All of the people at UNC were always supportive of what I wanted to do and even made exceptions for that sometimes, which was great,” she shares.

In the spring of her senior year, for example, one of the dolphins that the Wild Dolphin Project studies became stranded and required rehabilitation. The release of this animal back into the wild was scheduled during the middle of the semester, but it was important for McPherson to help — and she was able to with encouragement from her professors. She missed classes for a week so she could fly down to the Bahamas to aid project researchers.

“My professors were really understanding,” she says. “They knew it was important for me to be part of this research and release effort.”

The art of flying drones

The spinner dolphins that live on the west coast of Oʻahu are “basically famous,” according to McPherson, who explains that people come from all over the world to see and swim with them. But, as you can imagine, this human interaction affects the population — which researchers don’t actually know much about. 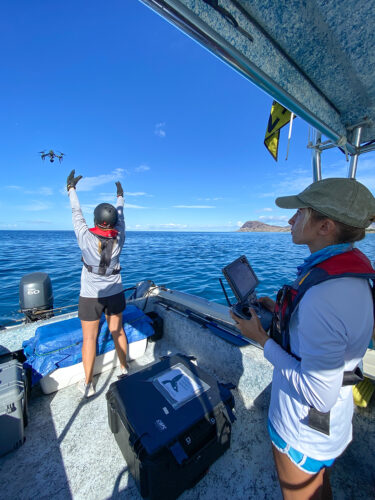 It takes two people to launch a drone off a boat. Here, McPherson mans the controls while her helmeted research assistant holds and then releases the drone into the air. (photo courtesy of Liah McPherson)

There’s little data on the number of dolphins that use the coastline, the health and ages of the population, and their distribution around the island. That’s where McPherson comes in. As a graduate student within the Marine Mammal Research Program at the University of Hawaiʻi at Mānoa, she’s spent the last two years photographing the pod with drones and DSLR cameras to uncover this information.

Flying drones is a challenge and to do so for research requires a FAA commercial license. Flying drones from a boat takes even more skill. The pilot must consider swell, wind speed, and direction and needs another person to help them get it in and out of the air. Typically, one person stands at the bow or stern, holding the drone over their head — and wearing a helmet for protection — while the pilot mans the controls to launch it into the sky. Clear communication between both people is essential for a successful take-off and landing.

The first time McPherson saw someone use a drone was while interning with the Wild Dolphin Project, but not by a member of Herzing’s team — just a collaborator who went out for a day with them on the boat.

“I remember seeing the videos they got and thinking, Wow, this is such a cool perspective,” she says. “Then I started looking at papers. People were just starting to use drones at that time, and I thought it was pretty untapped and no one was doing it with these dolphins in the Bahamas. So I figured I should get in on it.”

McPherson’s experience with drones has launched her a long way from home. Not only did it help her with acceptance into her graduate program, but most recently, it became her ticket to join a research expedition to Antarctica.

In June 2021, while attending a barbecue at her advisor Lars Bejder’s house, he asked her if she’d like to go to Antarctica with a colleague of his in February 2022 to fly drones over whales to contribute to a long-term data set on whale health and population.

“I was like, What?” she says with a laugh. “I kind of freaked out. Between then and a few months ago, I never really knew if it was going to happen. But it did.”

This past spring, she spent six weeks aboard an expedition cruise line called Hurtigruten, working with scientists from the California Ocean Alliance (COA). Whenever the cruise ship stopped to let guests adventure on land, McPherson and two other COA scientists would hop in a boat and head out into nearby waters to conduct their research.

McPherson and her teammates — Chloe Lew, an acoustician with COA, and Kiirsten Flynn, a research biologist with Cascadia Research Collective — quickly learned how a beautiful Antarctic day could turn deadly in a matter of minutes.

“There were days we could go out where it was nice and calm. And then within 10 minutes it’s whiteout conditions,” McPherson recalls.

Flying a drone from an inflatable raft in the middle of the Antarctic was a wake-up call. It is immensely cold and incredibly unstable. On a few occasions, McPherson launched her drone in windier conditions than she liked, forcing herself to ignore its high-wind warnings the entire flight. 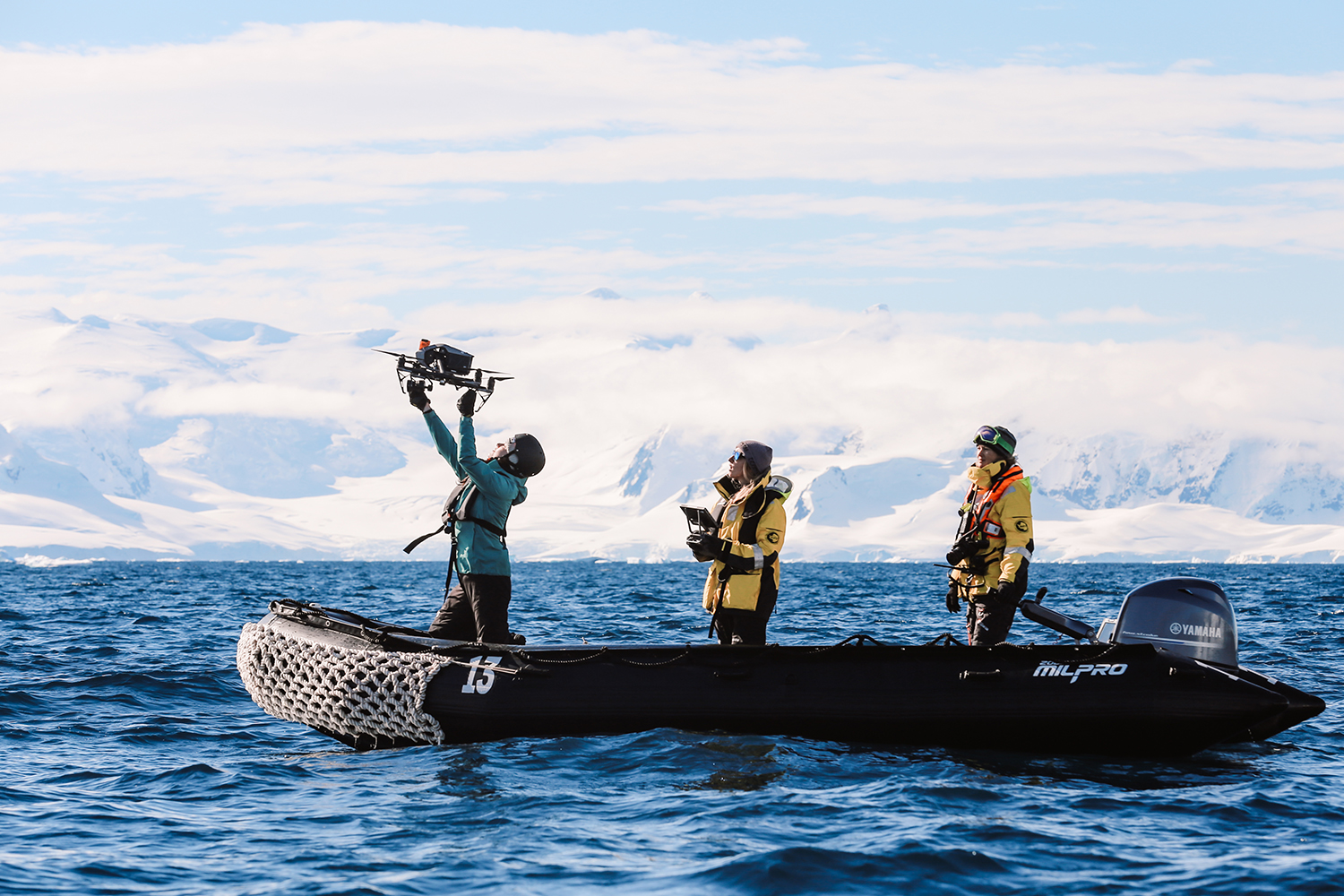 Chloe Lew catches a drone flown by McPherson after capturing images of whales during a research expedition to Antarctica. (photo by Leslie Hsu Oh)

Nevertheless, she and her team succeeded in their efforts. They collected data for 34 groups of whales, measured body conditions for 18 individuals, and obtained 11 biopsy samples.

McPherson returned to Hawaiʻi a stronger scientist. Not only is she a better drone pilot, but she learned how to collect biopsy samples from marine mammals — a skill she can utilize for whale research in Hawaʻi.

“My favorite thing about my research is that I get to merge my blend of hobbies — photography, videography, flying drones, driving boats — and do something that I love. And Carolina helped with that.”

Liah McPherson is a master’s student in the Marine Mammal Research Program at the University of Hawaiʻi at Mānoa and a UNC alumna.