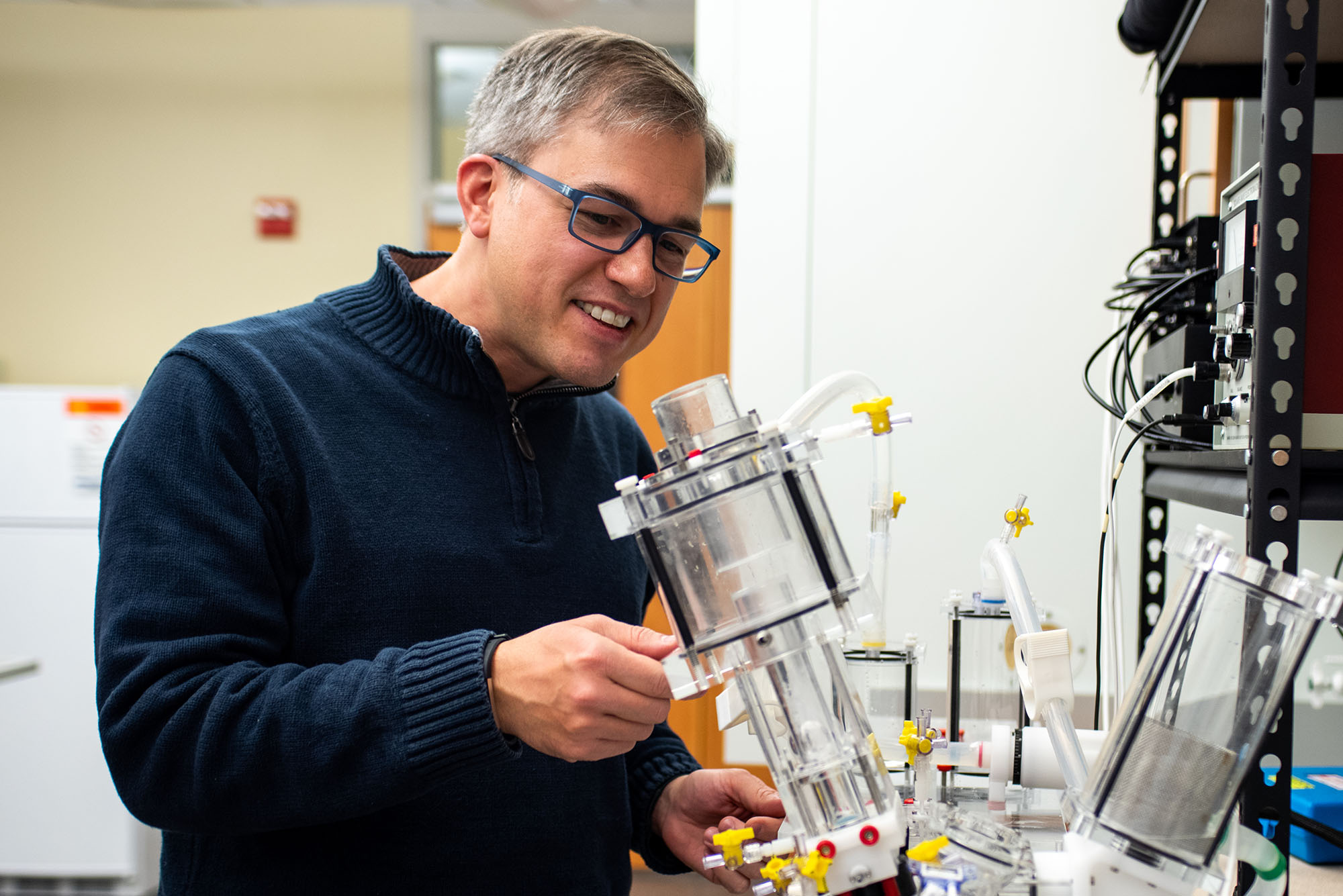 If there’s an asteroid coming toward Earth, how early do you have to start pushing on it to deflect it? At one point in time, this question consumed Boyce Griffith. To find the answer, he wrote a computer program to simulate the scenario, conducting a handful of numerical experiments in the process.

“It was a pretty simple thing, two- or three-body particle dynamics,” Griffith says of the physics calculations he performed. Most adults would probably disagree about the simplicity of such calculations –– and when Griffith wrote the code, he was just a middle schooler trying to finish his science fair project.

“I kind of grew up doing that sort of thing,” he says. “I don’t know when or why I got interested in simulation, but I’ve been intrinsically interested in it for a really long time.”

Because his passion for computer modeling seems innate, it’s no surprise that Griffith pursued research. He grew up in the science-focused community of Oak Ridge, Tennessee –– a town built around a nuclear laboratory developed during the Manhattan Project. Post-World War II, Oak Ridge National Laboratory was converted to a multiprogram research facility and is the largest science and energy laboratory in the U.S. Department of Energy system. Griffith’s father was an engineer at the lab, and many of his friends’ parents were scientists or engineers there.

“My dad was an early adopter of personal computers in the ’80s, so I grew up with these non-user-friendly computers as things that I could play with,” Griffith explains. “Just the act of getting them to play computer games sometimes required reworking the operating system, so there was a lot you had to do to make things work.”

Years later, Boyce Griffith still works with computers. But instead of simulating asteroid deflection or programming games, he’s trying to understand the fluid mechanics of the human heart.

An associate professor in the Department of Mathematics at UNC, Griffith runs the Cardiovascular Modeling and Simulation Lab. He and his team use mathematical computation to research and develop beating heart simulations, modeling the interactions of the heart’s fluid movement, physical structure, and electrical system. Long-term goals are to improve both the prediction and treatment of heart conditions and the design of cardiac medical devices.

The heart of the issue

More than 91 million people in the United States live with some form of cardiovascular disease, which claims more lives than all forms of cancer and chronic lower respiratory disease combined. Congestive heart disease, stroke, and heart valve failure are only a few of the many ailments contributing to the number-one cause of death worldwide.

While imaging techniques such as MRI have laid the groundwork for understanding cardiovascular mechanics, they can be expensive and time-consuming. Moreover, they often don’t provide adequate detail about the heart’s dynamic architecture, electricity, and fluid forces.

Cardiac electrophysiology, or the movement of electricity through the heart, is key to understanding heart function. Heartbeats are triggered by regular electrical impulses that spread through the cardiac walls, causing the contraction of each chamber in succession. Cardiac fluid dynamics, the pressures and movement of blood in the heart, can vary greatly among patients.

“You’ve got complex electrical dynamics, you’ve got structural motions and complicated fluid flow,” Griffith explains. “There’s a lot of components that all talk to each other.”

The interaction between these components needs to be considered when designing prosthetics and pinpointing treatment options for certain heart conditions.

“Understanding these forces is not just an image analysis project,” Griffith says. “It fundamentally requires mathematical modeling for physiological aspects that you can’t directly image, but still need to account for.”

Creating models to account for fluid structure interactions wasn’t part of Griffith’s original plan. As an undergraduate student at Rice University, he became interested in heart models while working on a cardiac electrophysiology project with his undergraduate advisor, Steve Cox. He was hooked and went to graduate school at New York University, specifically, to work with Charlie Peskin –– a pioneer in heart modeling –– with the intent of modeling the coupling between the heart’s electrical system and its mechanics.

But there was a catch. At that time, the existing modelling software included fluid and structural dynamics — but not electrophysiology. Griffith ended up rewriting this software in order to make it flexible enough to integrate the electrical models required for his research.

“At some point, it was clear that it needed to be done, so I did it –– and I’m still doing it!” Griffith admits. “It wound up being a bigger project than I anticipated.”

But how does one go about creating software to simulate these complicated processes?

Much of the mathematics behind Griffith’s work involves developing approximate solutions to complex equations. He and his team conduct laboratory experiments to calculate fluid force distributions. With this information, they can construct and tweak computer simulations.

For example, they are currently trying to model artificial heart valve functionality. Within these prosthetics, leaflets open and close to control blood flow, just like valves in a human heart. Using a technique called particle image velocimetry, they can image fluid movement through the leaflets with the help of a tabletop heart model called a pulse duplicator.

During these experiments, particles suspended in fluid are pushed through an artificial valve within a chamber of the pulse duplicator. As this happens, the particles in the chamber are illuminated by a rapidly pulsing laser beam, and their movement is tracked by a camera that takes a photo for each laser flash.

The resulting snapshots allow Griffith’s team to reconstruct the fluid’s motion through the valve and calculate the velocity of that fluid by examining the displacement of the particles between images. This analysis helps validate computer-generated models of the same process.

Getting back on beat

Another project Griffith and his team are working on is cardiac modeling for assessing the risk of clot development in the bloodstream, specifically focusing on clot formation due to atrial fibrillation. This heart condition, characterized by desynchronized beating between the left and right atrial chambers, is the most commonly diagnosed form of arrhythmia in the United States.

In atrial fibrillation, the electrical wave triggering a heartbeat is fragmented and chaotic, often reentering the cardiac tissue instead of being extinguished. The heart beats irregularly and often much faster than normal, greatly reducing blood flow. With this reduction comes the risk of blood coagulation and clotting, which can lead to stroke. Many patients with atrial fibrillation are prescribed anticoagulants, but these aren’t safe and effective for all cases. To determine whether patients should receive them, relatively simple metrics are used to assess clotting risk, and most patients are placed at intermediate risk.

“You might find out blood pressure, age, or whether the patient has diabetes. And those kinds of measurements might be correlated to the risk of a patient developing a blood clot, but from those measurements you’re not really understanding what the mechanism is. You just know that it’s indicative that something could happen,” Griffith says.

To improve these metrics, Griffith works with cardiologists and researchers from UNC, Duke, and the University of Utah to develop computer models that simulate atrial fibrillation and blood clotting.

Co-investigator John Vavalle, an interventional cardiologist at UNC, hopes models from this project will help identify which patients might benefit more from a procedure called left atrial appendage occlusion, rather than from taking anticoagulants. This appendage is a thumb-like tissue pocket that extends from the left atrium.

“We know that in most people who have strokes due to atrial fibrillation, the clot originates from the left atrial appendage,” Vavalle says. “If you can plug it, you can trap the clot in the appendage and prevent it from making its way to the brain.”

For the love of math

Both Griffith and Vavalle believe that mathematical models can greatly improve current healthcare and the lives of those affected by heart disease.

“I think they’ll ultimately make us better at what we do and improve outcomes for our patients,” Vavalle says. “Imagine the benefits of really understanding, at a level that we never have before, the flow states through the heart and what devices might be effective for certain patients.”

Griffith shares these ideals, emphasizing that computer models are needed most in the space where components of physiological systems such as the heart are well understood individually, but difficult to understand when interacting as a whole. Characterizing the interaction of individual components within a model will allow scientists to test hypotheses for how they function in their real biological setting.

But his ambitions to understand the inner workings of the heart are rooted in the same interest that had him simulating asteroid impact as a teenager –– he simply loves math.

“I want to make models because the dynamics are cool,” Griffith says. “I like the mathematical parts. There are these fascinating patterns and difficult numerical analysis problems to solve. We need to solve them in order to make the models and have the impact we desire.”

Boyce Griffith is an associate professor in the Department of Mathematics and adjunct faculty in the Department of Applied Physical Sciences within the UNC College of Arts and Sciences. He is also adjunct faculty in UNC and NC State’s Joint Department of Biomedical Engineering. He is a member of the McAllister Heart Institute and the Carolina Center for Interdisciplinary Applied Mathematics and is affiliated with the Computational Medicine Program at the UNC School of Medicine. John Vavalle is an interventional cardiologist and professor of medicine in the Division of Cardiology within the UNC School of Medicine. He is the medical director of the UNC Structural Heart Disease Program and leads the UNC Heart Valve Clinic.