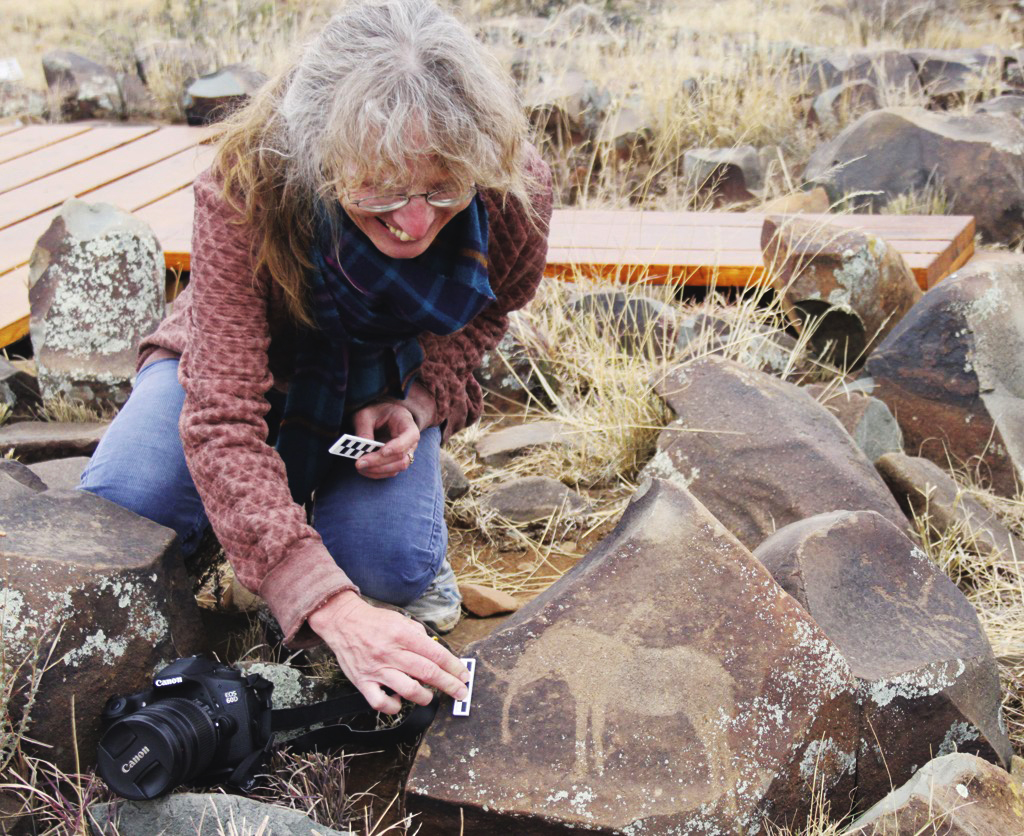 Photo courtesy of Silvia Tomášková
At Wildebeest Kuil in Northern Cape, South Africa, Silvia Tomášková sets up to take a picture of one of the best known engravings at the site — an elephant with a rider. Mystery surrounds the engraving, as elephants do not live in this region.
By Alyssa LaFaro
Society

As far back as 10,000 years ago, the San Bushmen — some of South Africa’s earliest hunters and gatherers — practiced a cultural tradition of carving images into small boulders. Some, perhaps those new to the craft, would use a variety of objects to peck away at the stone. Others created images of animals and geometric patterns by scraping the rocks with sharpened stones. Those with more skill used stone tools or possibly diamonds to produce finer, more detailed engravings.

Boulders were just the beginning. They also filled rock shelters, cliffs, and overhangs with vivid, painted images of human figures, animals, and geometric shapes. Next to Australia, South Africa is home to the largest number of painted rocks in the world — a fact that, for the last 50-plus years, has drawn researchers to study these keys to the lives of ancient humans.

While these vibrant paintings are the subject of much debate among rock art researchers, UNC anthropologist Silvia Tomášková studies the engravings, also called “petroglyphs,” and spent the summers of 2013 and 2014 in South Africa’s Northern Cape documenting them. “The engravings, in comparison to the paintings, are very ordinary. They lack color — and people are much more seduced by color than by something that’s carved. But there’s so much to be learned about them.”

Beyond the “why,” Tomášková hopes to discover how the images were made and what the learning process must have been like. “I am interested in creativity as something that can be described in many different ways, but always needs to be taught, learned, and most importantly, practiced,” she says. “It does not emerge suddenly in its perfection and beauty for everyone to admire. So I study these engravings as that ‘way of making’ — not just the art but also the people who made it and their communities.”

Antelope graze from afar as Tomášková crouches among the open plain of rocks about 20 kilometers outside the city of Kimberley in South Africa’s Northern Cape. She holds her Canon EOS60D close and focuses on the small boulder at her feet. She squats to get a better look at it and begins the photo process. It takes about an hour, as she moves inch-by-inch along the rock to capture images from every angle. 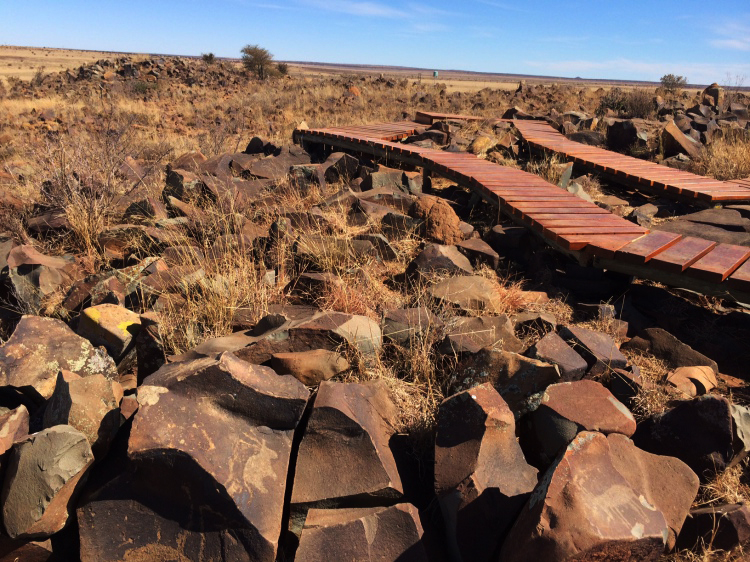 Photo courtesy of Silvia Tomášková
Tomášková collected images from 240 different engravings at this site in South Africa’s Northern Cape, just 20 kilometers outside the city of Kimberley. She’s confident she could collect at least 50 more from this one location, but hopes to visit other rock art sites during the summers of 2017 and 2018.

Tomášková collected images from 240 different engravings at this site in South Africa’s Northern Cape, just 20 kilometers outside the city of Kimberley. She’s confident she could collect at least 50 more from this one location, but hopes to visit other rock art sites during the summers of 2017 and 2018.

The engraving looks like a swirl — a common symbol. But this one, in particular, has the body of a lion attached to it. “So the swirl was no longer a swirl, but the head of a lion,” Tomášková says. “It’s clever. It’s funny. A geometric pattern suddenly becomes an animal. Somebody saw the potential of that swirl — enough to turn it into something else.”

Before focusing her efforts on rock art, Tomášková studied Eastern European stone tool technology from the Ice Age. But when she received the Andrew W. Mellon Foundation’s New Directions Fellowship — which helps academics in the humanities and social sciences acquire training outside of their own areas of interest — in 2010, she decided to take her research to South Africa.

While there, she visited well-known painted rock art sites like those in Eastern Cape Province and the Southern Drakensberg Mountains. Although the paintings are beautiful, the engravings are what intrigued her — with her background in stone tools, she could study them to determine how they were made. At the time, this was an uncharted research endeavor in the field.

After receiving additional funding from the Mellon Foundation, Tomášková returned to South Africa in 2013 and 2014. She focused on South Africa’s Northern Cape — a relatively unexplored region, home to most of the country’s rock engravings.

Each etching uses one of three techniques, according to Tomášková. A handful of them are made with a pecking motion, “like somebody was learning how to create it for the first time.” A variety of tools can be used to imitate this style. Others look as if they were scraped with a fine, sharpened stone. And some use what Tomášková calls a “hairline technique.” These engravings are more intricate and were probably made using a pointed stone tool or diamond.

Engravings like the lion are made in stages, sometimes with different techniques. This suggests it was possibly made by different people. “The swirl is more pecked and the body looks scraped,” Tomášková says. “Some of these engravings are made and left alone. Then somebody else — or maybe the same person — comes back and adds to it.”

The collection at Tomášková’s site in the Northern Cape may have been made over the course of many years. “I’m trying to figure out if it’s many people — many generations — making this art over a long period of time. So it might not be this giant art session that everyone is doing all at once, but rather a history book spanning decades or even centuries.”

When Tomášková returns to UNC, she uploads all of her images into a program called RealityCapture, which allows her to create a 3-D image of each engraving. She has images of 240 engravings — about 70-100 for each one. The process is time-consuming, but once each 3-D image is built, she can view the entire rock and continue to study these engravings from afar.

“Each time I build one of these 3-D images in the program, I see a different pattern of making,” she says. “I’m still in the middle of processing them all, but from what I’ve already observed there are four or five similar styles used by the San.”

While in the Northern Cape, Tomášková stays in Kimberley. Since the rock art site is about 20 kilometers away, she makes the 30-minute drive each morning and night to continue her work. She is lucky to have access to a car. Most of the locals travel by foot, and lack the resources — and the time — to visit this part of their cultural heritage.

Beyond trying to understand the creative process behind the rock engravings, Tomášková wants to bring the creative culture of the San people to the community of Kimberley. Inspired by the 3-D program she uses to conduct her research, she’s working with the local McGregor Museum to create a virtual exhibit of the rock art site. This will give the public and nearby schools an opportunity to see the engravings whenever they want.

“Many of the locals don’t even know about the engravings,” Tomášková shares. “And this will allow them to see it in a way that’s better than a textbook. They can see it as if they were there.”

Just last month, Tomášková received a National Geographic Society research grant that will allow her to return to South Africa during the summers of 2017 and 2018. While there, she plans to visit two different locations in the Northern Cape and capture images of the engravings there.

She plans to continue exploring the creative minds of the San people through this art in hopes that it will shed light on the importance of including art in culture. “I wish more people were given the opportunity to do art,” she says. “I fear that we are increasingly so focused on the vocational training of our students and giving them skills that we forget that one of the things that makes us human is the ability to create.

“I argue that everyone has the potential for creativity,” she continues. “We have to encourage more people to be curious about creativity; to be patient with their clumsy efforts and learn from others; and to learn tolerance of imperfection and respect for sometimes hard work that may lead to results much later.” Even 10,000 years later.

Silvia Tomášková is a professor of anthropology and chair of the Women’s & Gender Studies Department in the UNC College of Arts& Sciences.