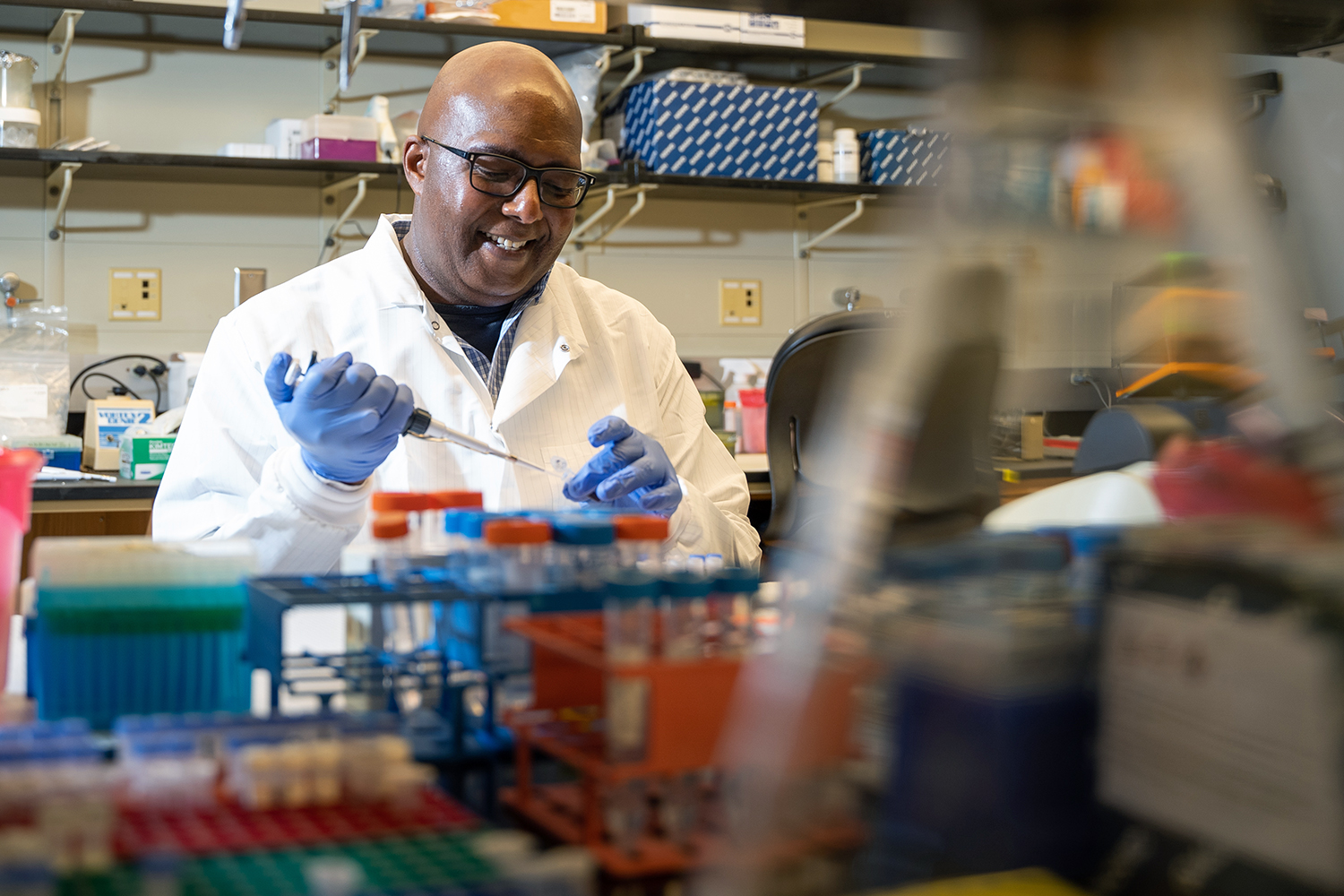 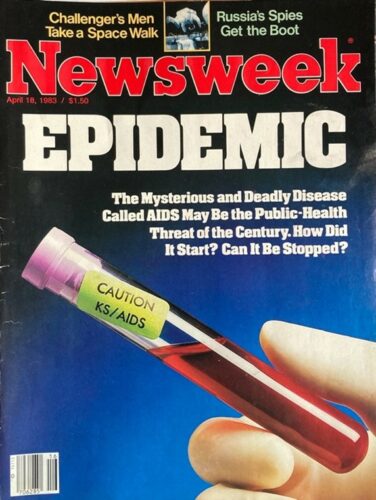 It was April 1983 when Craig Cameron recalled seeing the cover of Newsweek that changed the course of his life. “EPIDEMIC” spanned the cover in huge block letters above a vial of blood marked “CAUTION KS/AIDS.”

Cameron was a senior in high school at the time and hadn’t really thought much about viruses and vaccines. Chickenpox and mononucleosis all seemed like rites of passage, something everyone got at some point and recovered from in a few days.

“It wasn’t until I read this particular issue of Newsweek that it became clear to me that a viral infection could be a death sentence,” Cameron says.

In 1994 — after graduating with his undergraduate degree from Howard University and earning his PhD from Case Western Reserve University — Cameron became a postdoctoral fellow at Pennsylvania State University, where he eventually taught biochemistry and molecular biology. He was driven to explore lab-based research rather than pursue medical school because he had a desire to provide a solution to the suffering he witnessed while volunteering in clinics working with AIDS patients. For most of his career, he has studied how viral enzymes can improve treatments for disease.

Cameron came to UNC-Chapel Hill in 2019 and is trying to develop antiviral therapeutics and strategies for vaccine development. But there’s a catch: He wants to do so without knowledge of the specific virus that’s being targeted.

To effectively create antiviral drugs and vaccines that stop infection, it’s important to understand how viruses work. The goal of any organism is to reproduce itself, Cameron explains, and the same is true of viruses.

When the viruses Cameron studies enter a cell, they deliver their genetic information in the form of RNA, a complex molecule that has been getting a lot more attention lately thanks to COVID-19 vaccines. The viral RNA is then translated by ribosomes, the tiny machines in our cells that “read” RNA to create the proteins we need. The virus hijacks this protein-making process to replicate itself and infect other cells.

Every virus has proteins called enzymes with active sites that bind biomolecules and chemically modify them. These modifications are essential for establishing infection and producing more viruses.

“If we could understand, for example, the chemistry occurring at active sites of these conserved enzymes, we might be able to tune the reactions that are happening in a manner that prevents disease,” Cameron says. 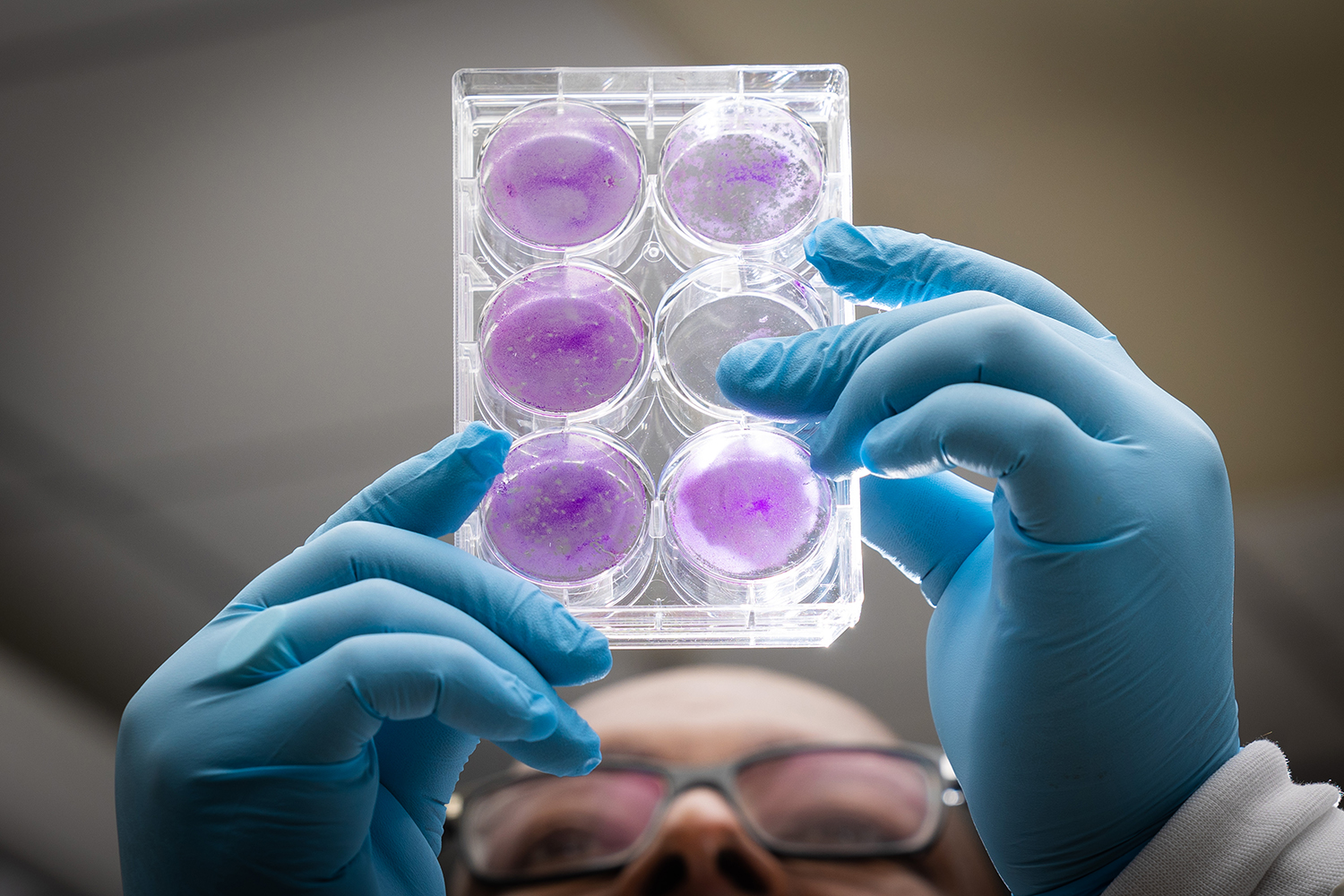 Since the start of his career, Cameron has been interested in trying to figure out how different individuals respond to viral infections.

“Different people have different responses to SARS infection and a lot of that’s probably based in genetic differences between individuals,” Cameron says. “The question is: Can we tease that out in the laboratory?”

After noticing inconsistencies between experiments in test tubes and petri dishes versus ones run in animal subjects, they realized they needed a way to get more reliable results. Running random experiments in animal models while they tried to figure it out would be inefficient.

They also realized that the way most experiments were run resulted in a loss of information. The norm had been to aggregate data and draw conclusions at a population level, but since a population is made up of individuals who each have their own genetic variations, not everyone reacts to a virus in the same way. There was a lot more information buried in the population-level experiments — like how the virus was spreading.

His lab wasn’t the only group to notice this problem. In 2014, researchers at University of California used polio to study the viral replication and subsequent infection in single, isolated cells. Cameron was a contributing author of a 2017 study that went further by introducing only one infected cell to one uninfected cell, allowing them to focus in on how the virus spreads on a cell-to-cell level. Now, his lab is continuing that work to discover new approaches for more accurate antiviral drugs.

“Every cell is not expressing exactly the same repertoire of genes or at the same level,” Cameron says. “Our realization here was that the population experiment was not really giving us the true accurate information on when viral infections start, and even if you have virus in cells, it’s not synchronous in every cell. So, we’re losing information that way.”

To better mimic the outcomes of viral infection in a mammalian host, the team realized they could use individual cells. Their approach would have a single virus infecting a single cell, allowing them to track how the virus enters, infects, and leaves a cell.

Once the cell is isolated, they use fluorescent markers to track their infection under a special microscope. The baseline color is red. When a green-colored cell infected with a virus — usually polio — is introduced, Cameron and his team can track how the infection spreads from one cell to the other by tracking the fluorescent, emerald dot. The microscope takes an image of the cells every 30 minutes for anywhere between 24 to 36 hours.

Some of the initial observations show that some cells have an innate immunity to the virus. In other instances, the virus makes the cell permeable, allowing it to leave one cell and infect another. Most interestingly, though, is a phenomenon where the virus spreads to another cell that doesn’t become permeable at all. This last observation excites Cameron, showing there are still many more discoveries to be made about the way infections spread.

A plan for future pandemics

Cameron believes gaining more knowledge about how viruses replicate and spread on a single-cell level will contribute to pandemic preparedness, helping scientists create antiviral therapies and vaccines without specific information on the infection. If they can make a drug inhibit an enzyme conserved across many virus families and essential for viral replication, then they might not need to have extensive knowledge on every new virus the world faces.

Thanks to a recent grant from the National Institutes of Health, Cameron and his lab will study an enzyme unique to coronaviruses that proofreads the RNA genome as it’s being replicated. Interfering with the proofreading process could make coronaviruses sensitive to drugs developed for RNA viruses that lack this enzyme. Antiviral therapeutics to treat coronaviruses may provide the most robust response to variants capable of evading vaccine-induced immunity.

On a more reflective note, Cameron says there’s an interesting parallel between what he saw and experienced during the AIDS epidemic and now. He remembers volunteering during the epidemic in the 1980s and how seeing the deadly impacts of the disease helped him decide he wanted to be part of the solution.

“I think a lot of people are actually going to be motivated to go into virology because of all this happening with COVID-19,” Cameron says.

Craig Cameron is the Jeffrey Houpt Distinguished Investigator and professor and chair of microbiology and immunology within the UNC School of Medicine.