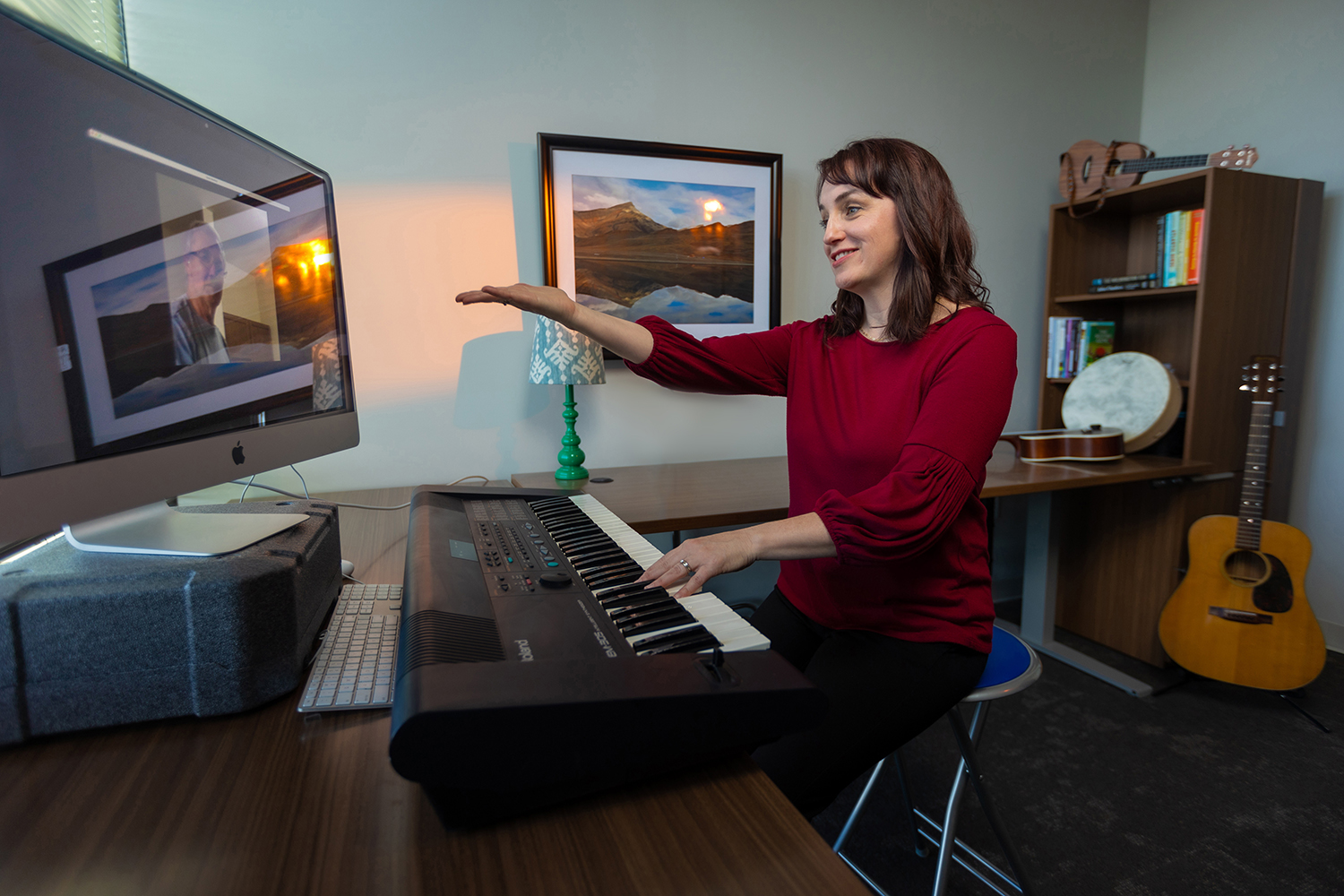 Music therapist Alie Chandler, owner of Ossia Music Therapy, often conducts virtual sessions with clients due to COVID-19 protocols. Sessions like these have been the subject of research by UNC Hussman School of Journalism and Media professor Amanda Reid. Reid has focused on how vague copyright laws have affected the practice of music therapists. (photo by Andrew Russell)
By Megan Suggs
Health | Society

Since then, research has demonstrated music stimulates multiple areas of the brain, says Barbara Else, a credentialed music therapist serving as consultant and senior advisor of policy and research for the American Music Therapy Association (AMTA) since 2005. With the anecdotal observations of the past and the scientific findings of the present, music therapists are developing treatments to assist clients suffering from a variety of challenges.

“We use music and the elements of music for non-musical outcomes, primarily to improve health, quality of life, and well-being,” Else says.

Music therapy takes many forms. Sometimes, it’s using music to support premature babies in the Neonatal Intensive Care Unit or helping people at the end of life in hospice care. In other instances, music therapy can include writing song parodies with teens or improvising music for children with autism in a classroom.

Amanda Reid, a media law scholar in the UNC Hussman School of Journalism and Media, became aware of music therapy in 2012 when she wrote a paper exploring how copyright law impacted the first amendment rights of internet radio webcasters. A section of the paper addressed how music can be beneficial in unexpected ways, like creating cross-cultural connections or healing.

Years later, as health care shifted to remote access, Reid wondered how copyright impacted music therapists’ practices. With the onset of the pandemic, this question became more relevant than ever.

“I saw this on the horizon before the pandemic. Then, when I saw how the practical application of health care was shifting in the pandemic, it was particularly eye-opening,” Reid says.

Reid learned that music therapists in face-to-face settings are largely unaffected by copyright and that, under copyright law, private performances of music are different from public performances. But with the pandemic there was a shift to online telehealth, which presents the possibility that performances won’t remain purely private.

Reid is drawn to unique questions. She has also studied roadside memorial crosses, analyzing free speech interests of memorial makers and the concerns raised by the government allowing religious symbols to remain along roadways. She approaches these tricky topics by forming a hypothesis and asking area experts if people have been impacted by the potential conflict.

“I get to say very clearly in my research abstract: nobody has studied this,” Reid says. “The downside to niche research topics is nobody’s really talking about it, and it’s hard to get it into the conversation. It can be exciting, but a little lonely.”

Music therapists usually don’t worry about violating copyright during in-person sessions with one person or small groups. But with video calls, the session could be a public performance, Reid says. For clients with poor internet connectivity, recording treatment and sending it as an mp3 file may be more feasible, but copyright law complicates the distribution of a recording.

Music therapy treatment can include the performance and creation of a variety of music. Some is original, uncopyrighted, or parody. Well-known songs are helpful because patients find it easier to connect to what they’re familiar with.

“Personal preference and needs make a difference in treatment,” Else says. “I’m not going to pick stuff for you that you can’t relate to. But I will pay close attention to the elements of music in delivering that piece of music.”

Despite concerns about copyright, some therapists choose not to limit their song selection to meet the needs of their clients and as part of their treatment plan. 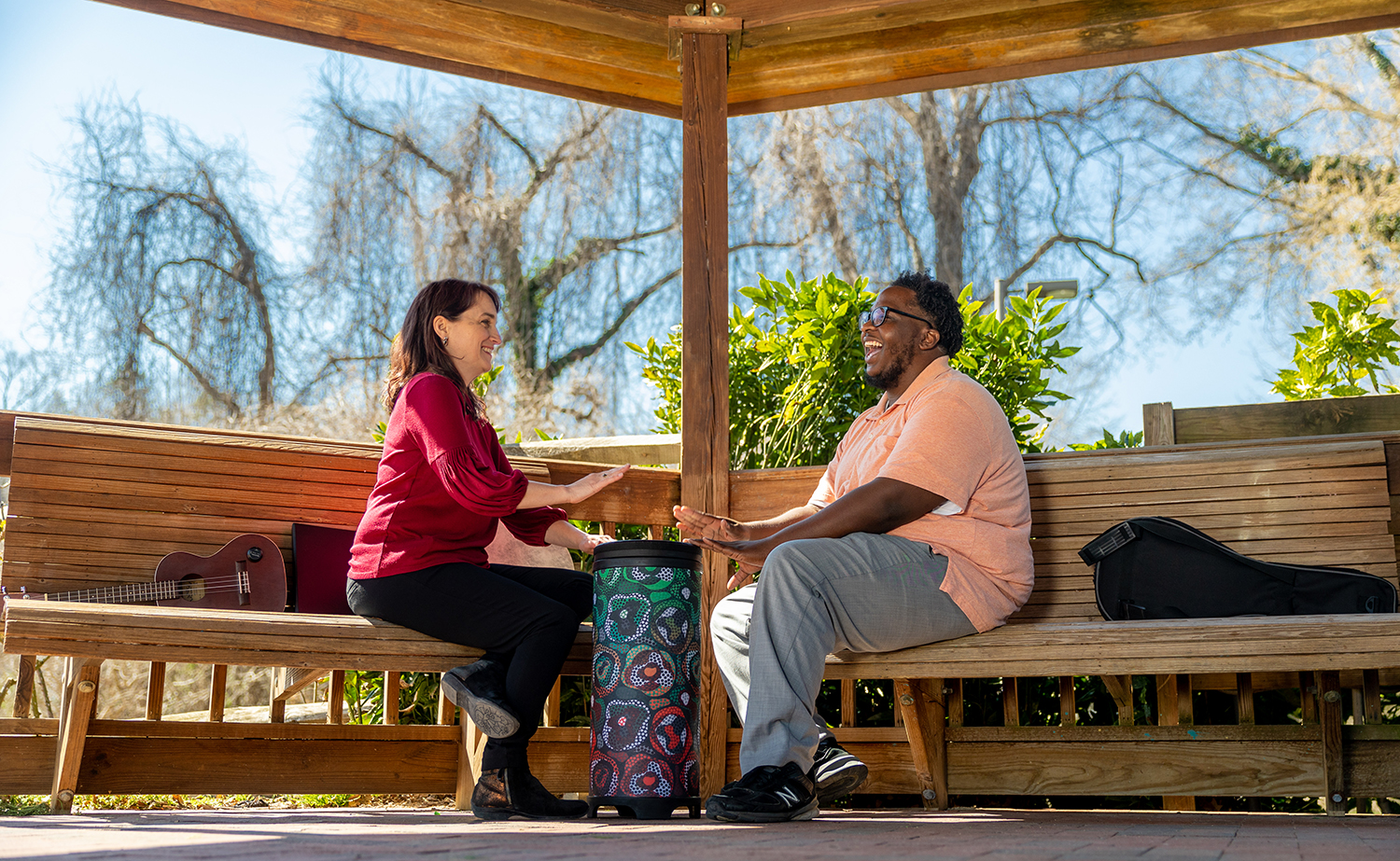 Chandler leads a music therapy session with her client Tyler Badgett at Gene Strowd Rose Garden Park in Chapel Hill. Like many health care providers, Chandler conducted her sessions in person before the pandemic, but made the shift to online care with the evolution of CDC guidelines. This nation-wide shift is what inspired UNC media law expert Amanda Reid to begin thinking about copyright in telehealth spaces. (photo by Andrew Russell)

No music label or artist has ever sued a music therapist, but churches, teachers, and other professionals have received cease and desist letters. Some therapists avoid using certain songs because they’re afraid of violating copyright law. The law is unclear or “gray,” as Reid calls it, when applied to music therapy.

When ambiguous laws intersect with First Amendment-protected acts, it has the potential to create a “chilling effect.” People who are uncertain of the limits of or defenses against a law may choose not to speak or act. This self-censorship chills public discourse, Reid explains. Some therapists have even asked people not to record or share recordings of their sessions.

“If people shy away from things that are permitted because there’s this uncertainty on the law, we don’t think that’s a great outcome under the law,” Reid says.

In her first paper on the intersection of copyright and music therapy, Reid proposed carving out a new copyright exemption for music therapy in a congressional bill.

“There’s a practical side of getting Congress to do anything. Yeah, it should be uncontroversial,” Reid says. “You can imagine a scenario in a rational world where this could be something people can get behind. But in this current moment, we don’t see a lot of legislative action.”

Reid wanted to demonstrate people were being impacted by the gray copyright law. When music therapists have copyright concerns, they go to Else. And so did Reid.

Else and Reid discussed the impact of copyright on music therapy, and Reid got in touch with 18 other therapists to interview them about how they navigated it. The interviews created so much data, she published two articles: one on how some music therapists self-regulate in a telehealth setting and another on how they restrict the publishing of clients or their relatives.

Once, around Christmas, a therapist was working with a child with a terminal illness, and the girl expressed the desire to play a recording of herself singing Rudolph the Red Nosed Reindeer — which is copyrighted — for her memorial service. And time was of the essence. The therapist contacted Else, who found the small family-owned publisher with the rights to the song. Luckily, they hadn’t yet shut down for holidays and gave their approval for the distribution of the recording.

“That’s rare to be able to talk directly to the publisher and get that kind of a turnaround,” Else says. “It’s very difficult getting through all that bureaucracy to get to the publisher.”

Even discovering who can give permission to a therapist is complicated. Copyright is a bundle of rights that can be distributed among multiple parties.

While interviewing music therapists, Reid found many feel the need to limit what people record or post. Some therapists reported that they would ask people not to post if they recorded. Others forbid recording music therapy sessions at all.

But social media can be a comfort to some patients. For example, parents of a child who recently had a tracheal tube removed may want to share the joy of a session where a music therapist got their child to sing. Social media is one of the easiest ways to share that their child is doing well with their support network.

Therapists want to protect their patients. While there may be no monetary consequences of a post being removed from social media for violating copyright, there can still be a sense of having done wrong. Some therapists are wary of letting any patient risk that.

“That’s what’s complicated,” Reid says. “Even if therapists might be willing to run the risk for themselves, do they feel comfortable enough with it that they’re willing to roll the dice for their vulnerable clients?”

Amanda Reid is an associate professor in the UNC Hussman School of Journalism and Media. She holds a secondary appointment at the UNC School of Law and serves as faculty co-director of the UNC Center for Media Law and Policy.

Barbara Else is a credentialed music therapist serving as a policy consultant for the American Music Therapy Association.