Moss-covered molehills pepper the landscape, each a different shade of autumn. Some are mustard yellow, others evergreen. Upon closer inspection, petite red buds peep through the growth while spindly, fingerlike plants called lycophytes grow long and tall on the mounds’ surface. It’s as if a coral reef was scooped up from the ocean, lifted 14,000 feet into the sky, and plopped on top of a mountain.

UNC students leap from one mossy hump to another, occasionally overshooting their mark and slipping into the muddy waters in between. As they stop to catch their breath, quickly exhausted from the high altitude, they drop a sensor into one of the small pools to measure carbon. Between measurements, they look up to admire the dusty white peaks of Antisana, the fourth-highest volcano in Ecuador. Just behind it sits Cotopaxi, once thought to be the highest summit in the world and now one of South America’s most active volcanoes, having erupted more than 50 times since 1738.

Home to 27 volcanoes, Ecuador has accumulated organic matter for thousands of years, as volcanic soils accrue more carbon than any other ecosystem. Called a páramo, this type of landscape is found in the northern Andes Mountains. It’s a tropical environment, but because of the high elevation, the temperature remains low and the decomposition of organic matter slows. Scientists call locations like this carbon sinks — places of long-term carbon storage.

“The carbon content per unit area of soil in this area of the Andes Mountains is among the highest on the planet,” UNC geographer Diego Riveros-Iregui says. 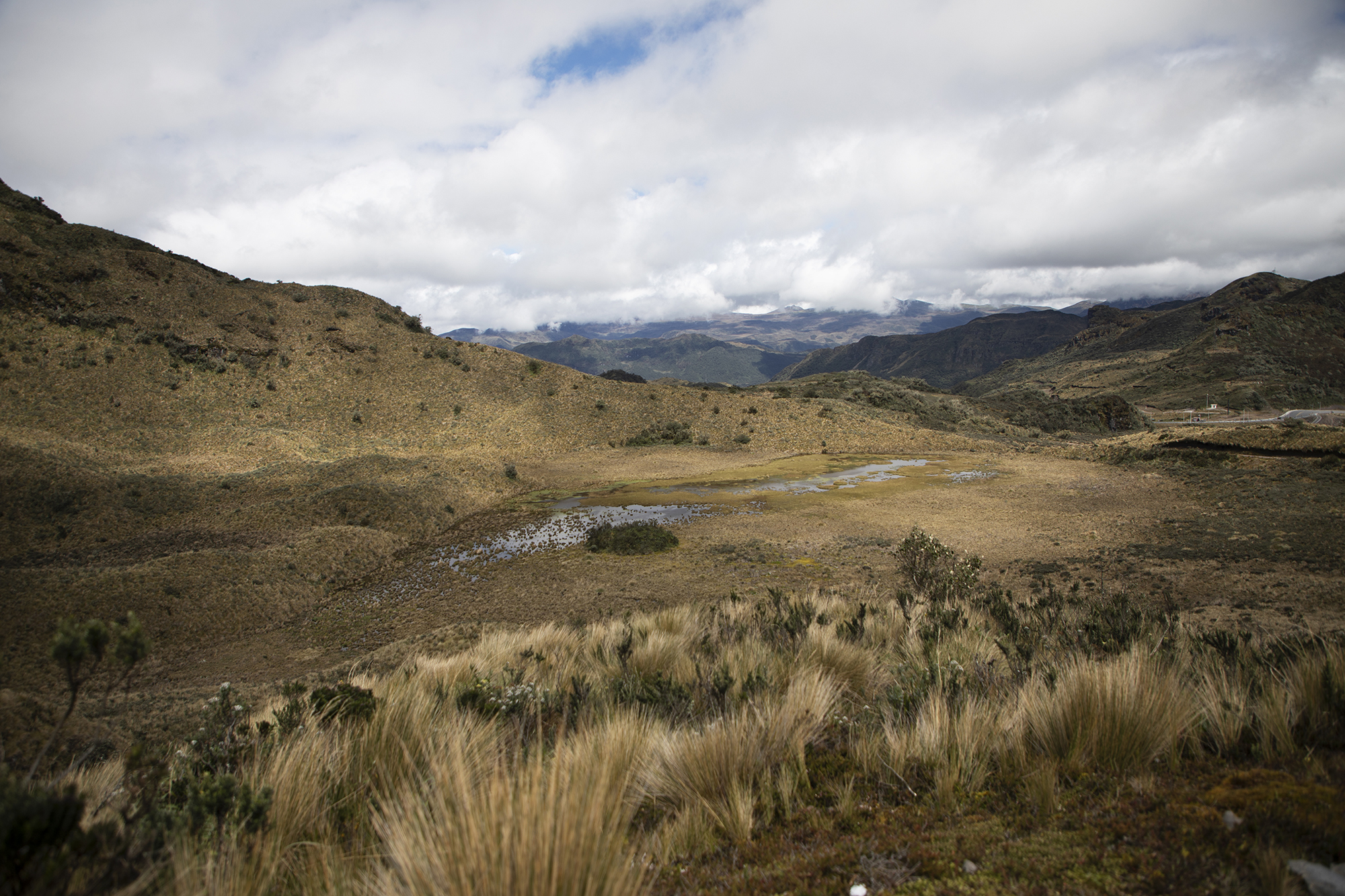 The research site for the project is an area of hundreds of small alpine wetlands connected by a series of narrow streams.

In the last three centuries, both natural and human-made carbon dioxide emissions have contributed more to climate change than any other greenhouse gas. It traps heat in the atmosphere, and while there are other gases with more potent heat-snaring ability per molecule than CO2, they are simply far less abundant. When CO2 is emitted, 40 percent resides in the atmosphere for 100 years and 20 percent hangs around for 1,000. The final 10 percent takes 10,000 years to turn over.

As the planet continues to warm, carbon decomposition rates within the North Andean páramo will increase and release all that organic matter, further heating the planet.

Riveros-Iregui is using his 2019 National Science Foundation Early Career Award, a five-year grant that combines research and education, to better understand these processes. He spent six weeks in Chapel Hill training five undergraduates and a PhD student on carbon measurement methods within water systems. This past summer, the team spent two months in Ecuador measuring the carbon in a watershed at Cayambe Coca Ecological Reserve. This is the first of three cohorts he will take to South America. 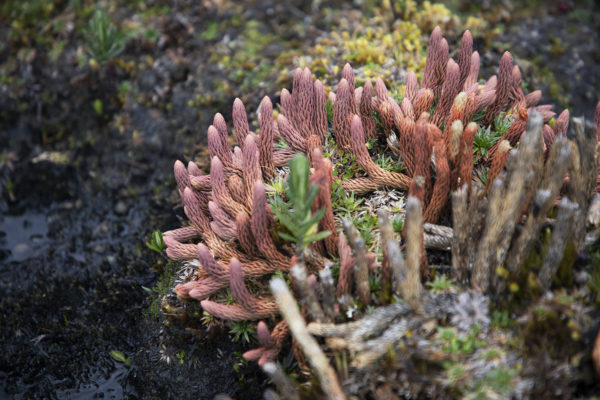 These burgundy clubmosses, lycopodium crassum, look like something you’d find in the ocean, but they are native to the Andes Mountains.

Inland waters like those found in the North Andean páramo are very important in the carbon cycle because they emit greenhouse gases like carbon dioxide and methane at different times of the year depending on how much water is flowing downhill.

“These ecosystems are emitting a lot more carbon than previously thought,” Riveros-Iregui explains. “Given the elevation and mean annual temperature of these tropical environments, these would be sources of atmospheric carbon that are currently unaccounted for.”

These tropical watersheds have never undergone consistent monitoring for this long, and the students involved have never conducted fieldwork — a challenge that entices Riveros-Iregui.

Knit hats. Face masks. Waterproof gloves. Winter jackets. Rainboots on top of three layers of socks. This is the reality of conducting research at the reserve, located just west of the continental divide. Some days it’s 50 degrees and sunny; others, it’s 25 and sleeting.

When humidity generated hundreds of miles away in the Amazon crashes into the Andes Mountains, it undergoes orographic lifting, which is when air is forced from lower to higher elevation, causing it to cool quickly and form precipitation.

Today, a white mist settles over the mountain. It’s 36 degrees. The wind moves at about 10 mph. Visibility is 30 feet. Just 15 minutes away, toward town, the sky is blue and the sun is shining. But here, it’s like being trapped in a snow globe. 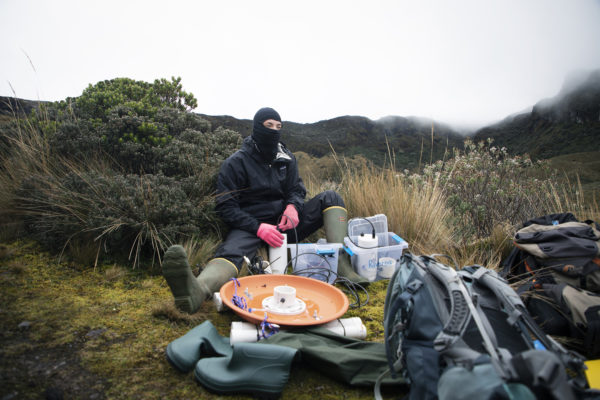 Senior Chloe Schneider preps a floating sensor for one of the stream sites. Most students have piled on their wardrobes — not just hats and coats but layers of shirts, pants, and socks.

Senior Chloe Schneider pulls on a black facemask and gloves, then heads down a steep, wooded hill, grabbing handfuls of long grasses and shrubs to stay upright. She carries a homemade carbon dioxide monitoring station — two pieces of wood attached to a gray plastic box containing a battery-powered datalogger. Face swathed in a rainbow-colored scarf and hat, senior Megan Raisle follows, wielding a piece of rebar that will secure the device to the ground.

After making their way to the slope’s bottom, they walk about a hundred feet to the left, where a small waterfall weaves through the site. They secure the monitoring station, running a wire from the box to a sensor placed inside a PVC pipe embedded in the streambed.

Later in the day, Schneider and Raisle repeat this trek, a different instrument in tow. On top of measuring the CO2 present in the water, they also need to record what’s being emitted into the air. To do this, they’ve created floating sensors using large flowerpot saucers with plumbing components wedged into the centers to hold the air collection chamber firmly in place. 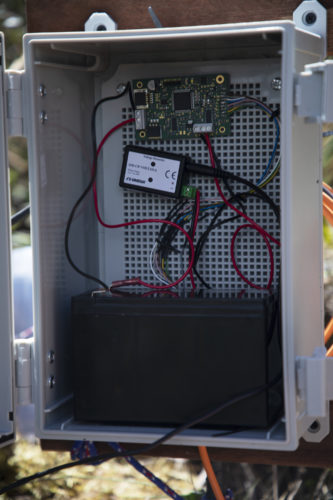 The carbon dioxide monitoring stations contain a circuit board, data logger, and battery, which needs to be changed out every two or three days.

“Building the sensor housings and platforms feels like an exercise in critical thinking,” says geography PhD student Andrew Murray, who designed the first iteration of these devices.

Additional sensors — 18 in all — measure water flow, dissolved oxygen, solutes like chlorophyll, other forms of carbon, and salt. During the entire two-month expedition, they remained in place, collectively recording nearly 2,000 environmental observations a day and, overall, painting a broad picture of what happens to the carbon stored in these ecosystems every time it rains.

Senior Maribel Herrera is well-versed in geography and environmental science, her two majors, but she’s just beginning to learn the analysis aspect. “I’m comfortable with doing the hands-on work and deploying the sensors and stuff,” she says. “But then when I get the data, it’s all these numbers. How do I synthesize this, and what do these numbers mean?”

Cue Murray. Not only did he create the blueprints for the sensor stations and oversee the project’s execution in Ecuador, but he also specializes in R — a complicated computer-programming language for data management analysis — and guided the students in that work.

“Collecting good data is just one part of this,” Murray says. “Knowing what to do with it and being able to work on it collaboratively with other people is another.”

Path to the páramos

Riveros-Iregui grew up in Fusagasugá, Colombia, which sits about 10 miles from the Sumapaz páramo. While these environments have long fascinated him, he didn’t begin studying them until the past decade.

Having completed his undergraduate degree in Colombia, Riveros-Iregui only had two specialties to choose from as part of his geoscience curriculum: oil or mining. At first, he thought he’d pursue a career in the oil industry. But halfway through his program, he realized he enjoyed the study of rocks more.

“Mining had components of what we call hard rock geology. You study rocks and look at them under a microscope,” he says, adding that while it was more interesting than oil, it still wasn’t fulfilling. 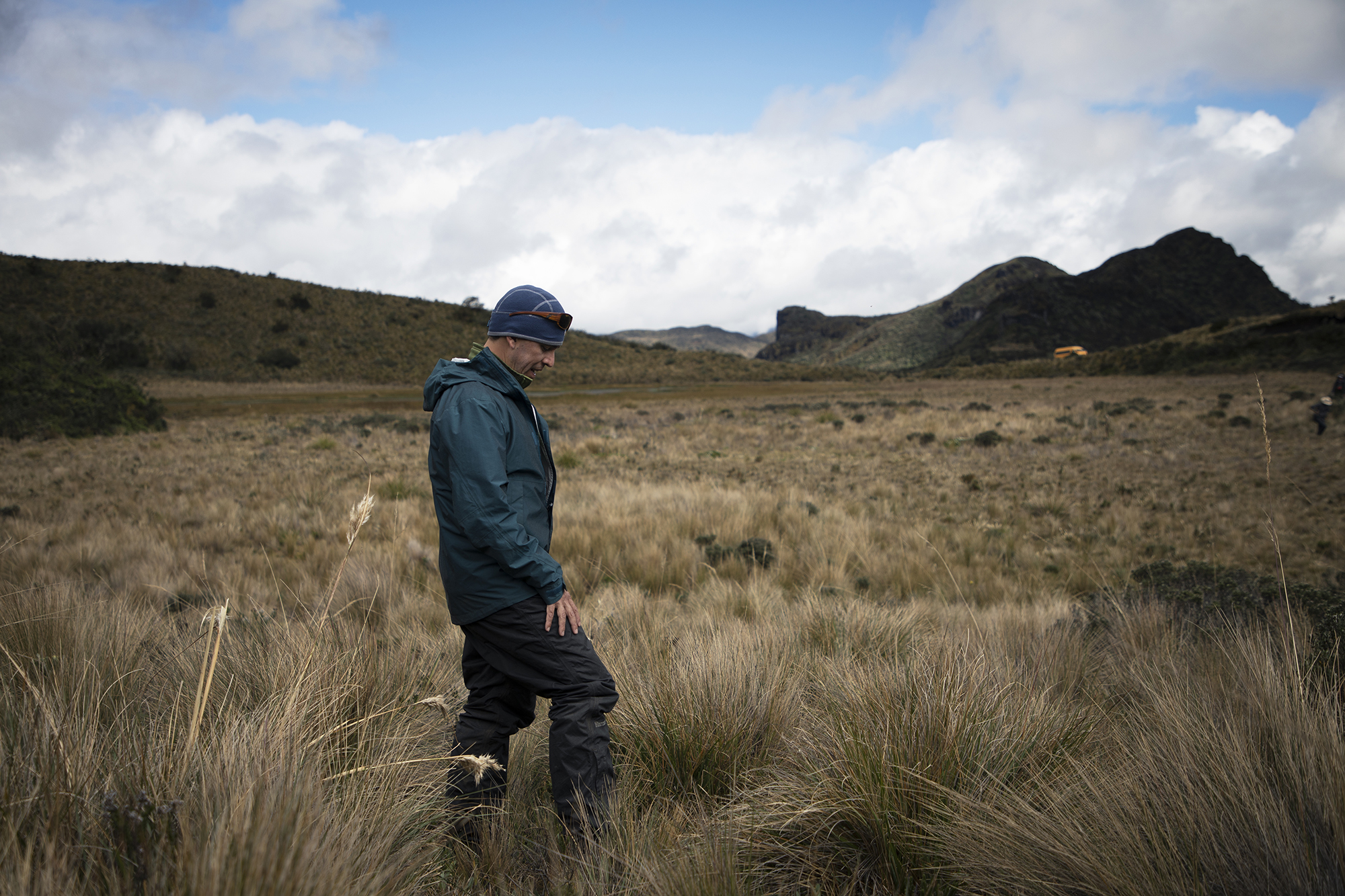 Riveros-Iregui stands at the head of the field site. “I’m amazed by how this project has come together,” he says. “It’s rare. I had a fear it was going to be very chaotic. But it hasn’t been. Little bits here and there, but overall it has gone really well.”

After finishing his program in 2001, he traveled to the United States with the plan to enroll in graduate school. But he discovered that his English was insufficient, the cost more than expected, and the U.S. education system confusing. “My conclusion at the time was that graduate school was not going to be in my future and that I’d probably need to find something else to do,” he says.

A neighbor suggested enrolling in a community college, even though he already had a four-year degree.

“It sounded like a good idea,” Riveros-Iregui laughs. “And I did not have a plan B.” After earning an associate’s degree in computer programming, he was offered a teaching assistantship at the University of Minnesota, where he completed his master’s in geology.

Stumbling over the graduate school process is far from unique, he says. “I come across so many students who want to go, but don’t know how to go about it. With the right guidance and gaining some exposure to research during their undergraduate [career], students can become competitive for graduate school fellowships.” 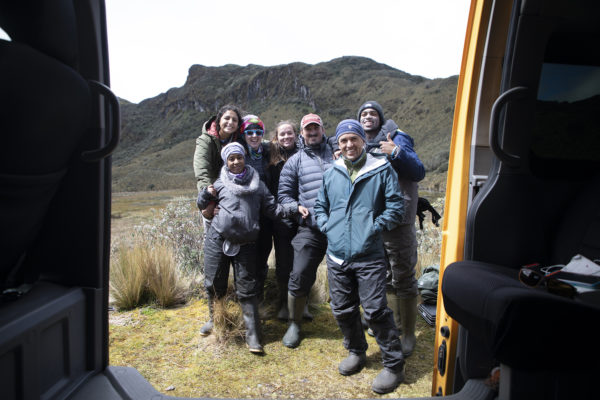 For junior Anayancy Estacio-Manning, a global studies major, just being out in the field is unfamiliar, let alone being in a harsh environment. “I think the hardest part has been more psychological in that I didn’t expect I could do something like this,” she admits.

Before traveling to Ecuador, the students spent more than a month in Chapel Hill prepping for the international fieldwork. During Estacio-Manning’s first few weeks, she felt lost. The other students, three of whom are geography and environmental science majors, would often discuss things like pH and dissolved oxygen levels with ease as they practiced setting up experiments. “I’d go back home and look up whatever it was they were talking about,” she says.

But Riveros-Iregui encouraged her abilities. “He understands me being out of my element as a social science major,” she says. “And he’s happy to explain things.”

Now back in Chapel Hill, Estacio-Manning recognizes how far she’s come and has grown more confident. “Knowing the two, physical science and social science, makes me sort of bilingual,” she shares. “And so now I can be that translator. I don’t need someone to translate for me if I’m able to understand both comprehensively.”

Now, Estacio-Manning and the four other students are using these new skills at the Museum of Life and Science in Durham, where they are presenting some of the work they performed in Ecuador to North Carolina families. 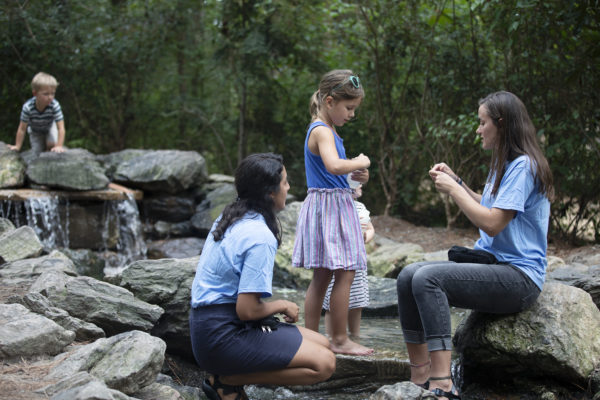 Herrera and Schneider teach children about pH levels and how they impact streams at the Museum of Life & Science in Durham. 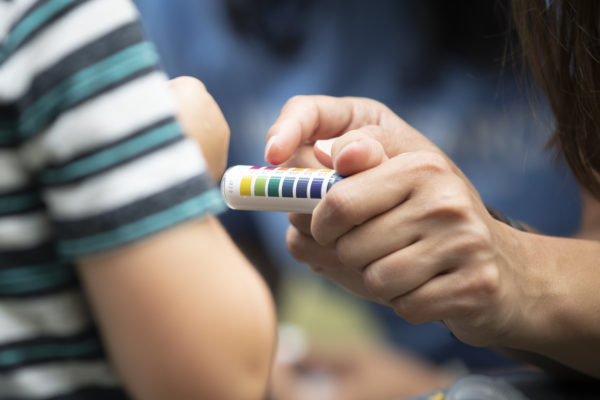 Schneider explains the different colors on the pH test. Red means the levels are low and basic, while dark blue indicates high acidity.

Riveros-Iregui places special emphasis on teaching and mentorship, noting that he had few mentors during his college career. He navigated academia alone — a feat that draws him to undergraduates like Estacio-Manning, one of three first-generation students working on this project.

“These undergrads amaze me,” Riveros-Iregui says. “I want them to know that if I could do it, so can they.”

Beyond the field experience, the five students agree that one of the biggest benefits has been getting to know one another.

Diego Riveros-Iregui is an associate professor in the Department of Geography within the UNC College of Arts & Sciences.

Andrew Murray is a PhD student in the Department of Geography within the UNC College of Arts & Sciences.

Chloe Schneider is a senior majoring in geography and environmental science with the UNC College of Arts & Sciences.

Megan Raisle is a senior majoring in geography and environmental studies with the UNC College of Arts & Sciences.

Maribel Herrera is a senior majoring in geography and environmental studies with the UNC College of Arts & Sciences.

Anayancy Estacio-Manning is a junior majoring in global studies, with minors in geography and environmental studies within the UNC College of Arts & Sciences.

Nehemiah Stewart is a junior majoring in chemistry and mathematics within the UNC College of Arts & Sciences.