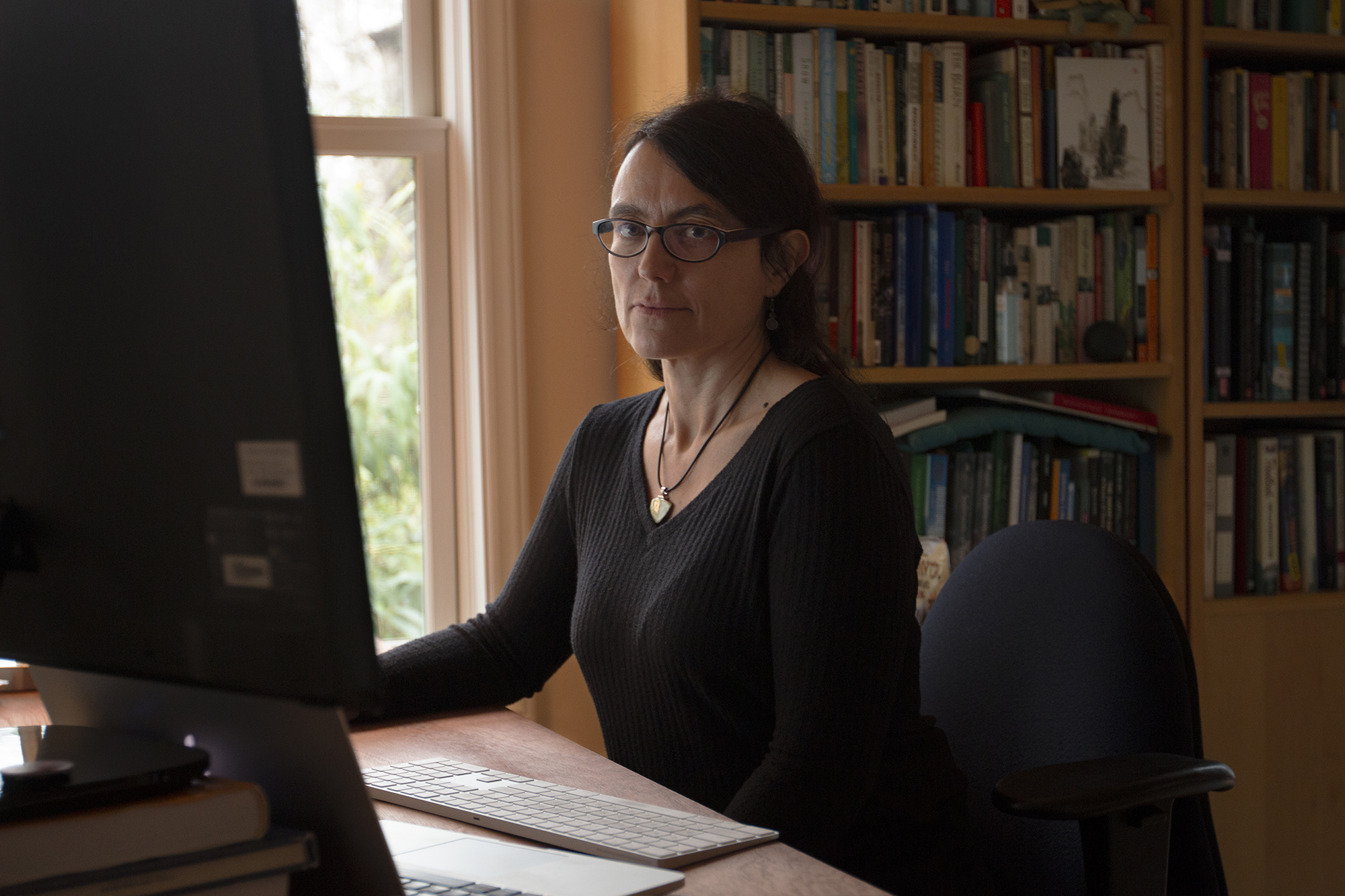 photo by Alyssa LaFaro
Julia Haslett, a documentary filmmaker and assistant professor of communication at UNC, edits her films in her home office in Carrboro, North Carolina.
By India Mackinson
Creativity | Society

“Attention is the rarest and purest form of generosity,” wrote Simone Weil, a French philosopher and labor activist from the 1930s — and subject of documentary filmmaker Julia Haslett’s first feature-length film “An Encounter with Simone Weil.”

In this quote, Weil considers humanity’s innate responsibility to help those in need, filling up volumes on the concepts of empathy and suffering before dying of self-starvation at age 34 in solidarity with those in Nazi-occupied France. It put into words what Haslett felt while working on a different project one year prior. 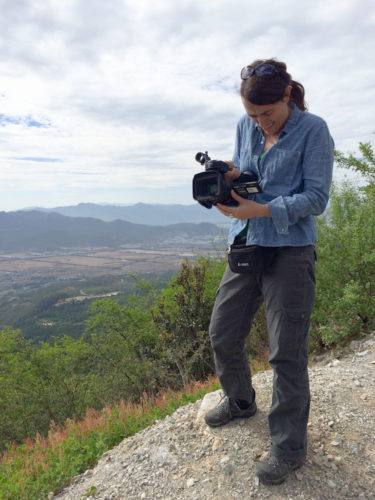 As a filmmaker-in-residence at the Stanford University Center for Biomedical Ethics, Haslett co-produced and co-directed a short film series, “Worlds Apart,” examining sociocultural barriers in health care. The hundreds of patients she interviewed for the series, despite their unique stories and distinct backgrounds, all had one thing in common: They wanted someone to listen. “That one thing kept coming up,” Haslett says. “That at the end of day, what they wanted more than anything else from their doctor is to feel like they were being listened to.”

About a year after leaving Stanford and relocating to New York City, she stumbled across Weil’s quote and her volume of work. “That quote resonated for me because of my work on ‘Worlds Apart,’ and also just more generally with what I observed in the world,” Haslett says. “As a documentarian, you’re asked to listen to the stories and experiences of others and transform them into something through story. All you really can offer is your attention.”

Still inspired by Weil’s words, Haslett’s work continues to draw attention to people who may have been otherwise overlooked, bringing a sense of empathy and understanding to her viewers. Now, in her newest feature-length film, “Pushed Up the Mountain,” she links two countries separated by over 7,000 miles and hundreds of years of cultural divides, eliminating the distance between their citizens, even from across continents.

Haslett has studied and worked in the U.S. since high school, but she regularly visits family in the U.K., which continues to influence her life and her films. She found the inspiration for her latest film in her godfather’s rhododendron garden in the Scottish Highlands.

While there, she met a group of conservationists spending the weekend classifying its plants. She decided to make a whimsical short film about these people who’ve dedicated their lives to the rhododendron, but in the process, she learned those plants had been brought from China — a nation with over 30,000 native plant species to the U.K.’s 1,400 — over a hundred years ago. 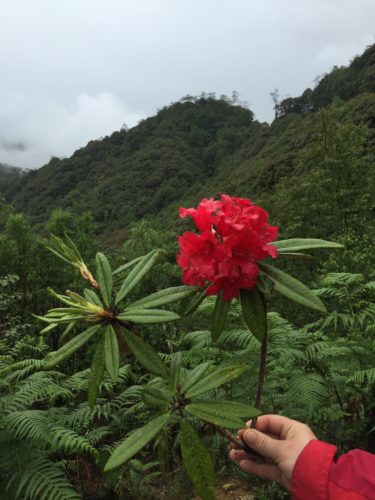 A rhododendron delavayi from China’s Yunnan Province, near the border of Myanmar.

“But when I was encountering them, in the early 21st century, they were endangered in China because of development, overexploitation, and climate change,” Haslett says. “So people had started to reintroduce plants from Great Britain back to China, to help supplement the plants that were endangered there. Something about that trans-historical, transcultural return was fascinating to me.” The project expanded from a short about a Scottish garden to a feature-length film including the complex history, culture, and traditions of nature conservation in a country of 3.7 million square miles.

The film follows conservation biologists in both Scotland and China including Geng Yuying, a Chinese botanist who helped found the Huaxi Subalpine Botanic Garden — which focuses on cultivating these endangered plants in China’s Sichuan province. Married to a Scotsman, Geng had to travel to Edinburgh to study these plants native to her home country. “The fact that she had to leave her own country to understand her own country was striking,” Haslett says.

Through Geng, Haslett explores the challenges and philosophy of conservation, including Geng’s struggles to secure funding for her research on a little-known, little-cared about plant found only in China’s remote mountains. The film documents attempts to connect the rhododendron to the more charismatic and famous panda bear to generate more interest — and therefore more funding — in the plant’s conservation.

“If a species or genus has people advocating for it, its likelihood of survival is increased,” Haslett says. “At the same time, that raises these big questions. Who are we as humans to be deciding what gets to survive and what doesn’t?”

Back in Scotland, conservationists have a different problem: bad publicity. One specific species, Rhododendron ponticum, has taken over. Its dense, rapid growth squeezes out other species, decreasing the biodiversity and health of local ecosystems. Millions of dollars have been spent to eradicate it from the countryside.

“News headlines tend to just use the word ‘rhododendron’ instead of saying it’s just one of over a thousand species in the rhododendron genus,” Haslett says. “As a result, the people who are working to try to preserve the genus in Great Britain are up against this PR nightmare.”

In the film, she interviews conservationists from the Royal Botanical Garden in Edinburgh, dedicated to restoring the public’s opinion of rhododendrons, and a forester from the Scottish Forestry Commission, dedicated to killing them. In their exchange, she highlights the potential consequences of invasive species, a problem plaguing countries throughout the world.

Growing at the highest altitudes, there’s not much room left for rhododendrons. As the planet warms, plant species will have to shift their ranges to remain in the climates they grow best. For rhododendrons and other alpine species, that means gradually moving up the mountain to cooler temperatures. Eventually, as the Himalayan snowpack retreats, these plants will run out of space to climb to, foreshadowing the fight plant and animal species alike will endure in the upcoming decades.

As climate change becomes a bigger piece of the conservation puzzle, scientists have to work hard to understand its impact on their research. “Their work is really just Herculean,” Haslett says. “To understand the incremental change from one year to the next, you have to consistently go back to collect data.”

Haslett went with one conservationist, Fang Zhedong, into the mountains near Myanmar to find these plants in the wild, her camera and sound gear in tow. “At times I felt like I was filming for National Geographic,” Haslett laughs.

Their trip was the latest in a kind of data collection that started in the 19th century with adventurous scientists making the trek to find and photograph these plant species. Comparing the photos from the late 19th and early 20th centuries to the ones taken in the 21st helps conservationists understand how much the mountain environment has changed since the industrial revolution. “Those photos are actually being used as documentary evidence for climate change,” Haslett says.

The conservation landscape of western countries such as the U.K. and the U.S. and eastern countries like China has been shaped by different cultural forces. In China, religion has played a major role in preserving land over time. Regions and mountains cared for by Buddhist and Taoist monasteries have stayed less developed than areas not under religious influence. “These traditions also informed centuries of Chinese landscape painting,” Haslett says. “And I incorporate some of those iconic images in to the film.” 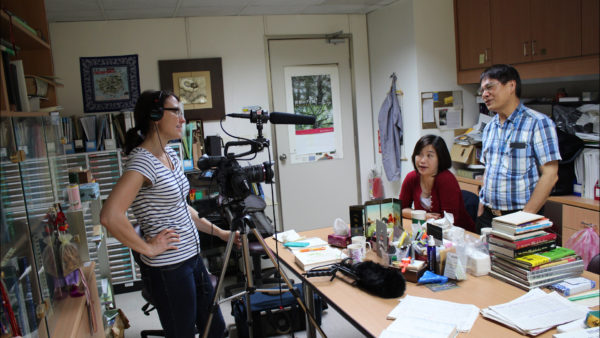 But over the last several decades, these traditions have become at odds with the goals of a rapidly industrializing China, a contrast Haslett highlights in her film. Through that contrast, she hopes to grow viewer’s understanding of China and the country’s nuanced relationship to the environment. “There is very little understanding of what’s going on there,” Haslett argues. “That’s not to say a lot more can’t be done, but that there are a lot of committed individuals who are working very hard, mostly in obscurity, to preserve natural habitats and biodiversity.”

Filming in remote locations in a country where she didn’t speak the language was a challenge for Haslett. Her film crew, which consisted of herself and a translator, Chiu Kang-yen, followed conservationists through mountains and subtropical rainforests, often away from electricity. But keeping equipment charged and dry was nothing compared to the language barrier.

For interviews, Haslett would discuss her questions with Chiu, a trusted colleague, leaving the interviewing to him while she operated the camera. “I didn’t know exactly what the answers I was getting were,” Haslett reveals. “I would get a synopsis of what had been said, but there were definitely some surprises in the edit room when I got all the detailed translations.”

Explaining conservation science in a relatable way to her audience has also challenged her as a filmmaker. “My films about cross-cultural medicine had science in them, but in that case, there are people talking about their health conditions, which is a generally transferrable or understandable set of experiences,” Haslett says. “All this conservation science is not nearly as accessible to people.”

But after surmounting obstacles while shooting and then editing, Haslett is closing in on a finished product, one that she hopes will spark insight and honest conversation. “There’s something about people sitting in a darkened room or cinema, having a shared experience and then talking about it. It’s almost like a church,” Haslett says. “It really opens up a forum to connect to strangers.”

For audiences viewing “Pushed Up the Mountain,” she encourages people to think about humanity’s environmental impact on a geological time scale. “Rhododendrons are eventually going to go extinct and so are we as a species,” Haslett says. “It’s really an existential question of what do we want to do while on Earth in the finite time that we’re here and to get people to reflect on what small role they might want to take in terms of preserving the environment.”

For Haslett, that could be as small as starting a garden and adapting a willingness to learn not just about the environment but other cultures as well. “We’re all so interconnected through economics, through the environment, through culture and media for better or worse, so how do we then contend with that in a positive and compassionate way versus an antagonistic and hostile one?” Haslett says. “That’s why education is so critical. The more that we learn about people that are different from us, the more compassion and empathy we can have.”

While Haslett finds gratification in sparking conversation with her films, there’s one more personal aspect to making documentaries that drives her forward — fulfilling her curiosity. “As a documentarian, your profession is to pay attention to the stories and experiences of others and transform them through a story,” Haslett reflects. “It gives me a ticket into worlds that I would never really have access to and enables me to learn about the world that I live in.”

Julia Haslett is a documentary filmmaker and an assistant professor in the Department of Communication within the UNC College of Arts & Sciences. From 2016-2018, Haslett was a Thorp Faculty Engaged Scholar, a Carolina Center for Public Service program that brings together selected faculty from across campus to engage in a two-year experiential, competency-based curriculum designed to advance their engaged scholarship. Mengqi Jiang is the co-producer of "Pushed up the Mountain" and earned her M.A. from the UNC School of Media and Journalism.