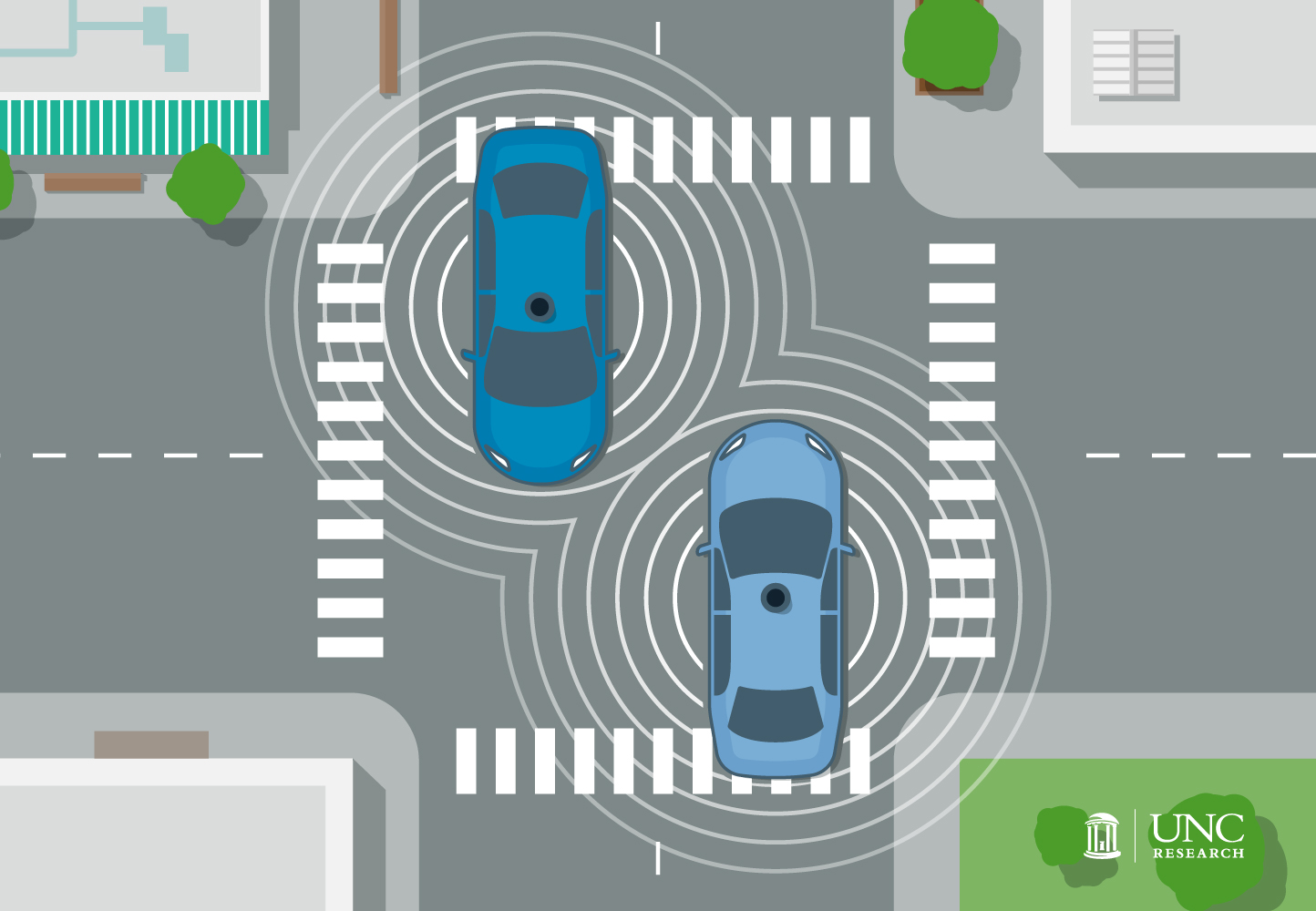 Corina Cudebec
What will our world (and our health) look like when we no longer drive our cars?
By Mary Lide Parker
Health

Over 30,000 Americans die in car accidents every year — 94 percent of those fatalities are caused by human error. Around the world, approximately 1.2 million people lose their lives in car crashes each year.

While organizations like the National Highway Traffic Safety Administration and the World Health Organization calculate these grim statistics annually, they don’t account for all car accidents. “Keep in mind those are just fatalities,” says Travis Crayton, a master’s student at UNC. “That number doesn’t account for all the hardship and healthcare costs included in crashes where people don’t die.”

What if we could eliminate all car accidents caused by human error? That is one of the main arguments made by proponents of autonomous vehicles — safety. Our country, and the world, is on the cusp of a revolution in transportation technology and infrastructure. While industries are focused on perfecting the technology, and consumers are skeptical about trusting it, researchers face a blank page — there is no pre-existing data.

But that didn’t stop Travis Crayton from pursuing it. He went to Benjamin Mason Meier in the Department of Public Policy. “He was interested in what automated cars would mean for the shape of our cities in the future, and I was interested in what this would mean for public health,” Meier says. “There were no articles out there really thinking about the health impacts.”

The link between public health and transportation dates back hundreds of years — to when a horse and buggy was the dominant mode of transit. “Public health and planning have always been really closely linked,” Crayton says. “Horse manure in cities impacted public health in a really negative way.”

Transitioning to the automobile changed everything. “When we first moved from horse to car, we had to think about transportation issues that didn’t exist before,” Meier says. “We got rid of manure on the street — but suddenly we had to deal with more accidents.”

We consider a new technology to be “disruptive” when it changes the way everything happens — airplanes, the Internet, and smartphones are just a few examples. Disruptive technologies often upend existing regulations and can render current infrastructure obsolete — consider pay phones in a world where everyone has a phone in their pocket.

“What makes automated transportation really disruptive is taking humans out of the equation,” Meier says. “We’ve always had to do it ourselves.”

Much of the debate about the pros and cons of driverless cars comes down to control. Humans are reluctant to relinquish control of their vehicles — how could a computer possibly cope with the nuances of an icy road or avoid a pedestrian stepping into traffic?

These kinds of “what if” questions often accompany developments in transportation technology. “Back in the ‘70s some people thought that mandatory seat belt laws would make people drive more recklessly,” Meier says. “But now, seat belts are a normal part of riding in a car.”

Meier and Crayton want to ask the questions that will help frame policies that will be most beneficial to public health.

“Getting the right policies and regulations and considering health impacts from the beginning is going to help create a transportation system and infrastructure that can really support health,” Crayton says. “We’re hoping to raise the point that we should think about that and integrate those perspectives from the beginning.”

Connecting to the cars of tomorrow

While the idea of a self-driving car still seems a bit too futuristic for many, thousands of people are already driving cars with fully automated features.

“You hear a lot about ‘connected’ cars now — a lot of companies are using that kind of language,” Crayton says. “So there are elements of this technology already on the market—people are using it.”

Many car companies have developed their own systems for automated features, like Acura’s Collision Mitigation Braking System or a Lincoln MKZ with Active Park Assist, which can parallel park itself.

But these features are just a glimmer of what the future holds. “What we’re talking about is moving to a fully automated system where there is no need for human input,” Crayton says.

The long term vision is a fully automated transportation grid where all elements of the infrastructure are able to communicate with each other, potentially eliminating two of the worst components of driving — traffic and accidents.

“Some people say you might not even need traffic lights if you have a fully automated grid,” Crayton says.

Consider this scenario: what if you could work in a major downtown area and live in the suburbs without losing several hours a week to commuting? With an automated transportation grid, not only would your commute be shorter and safer, you could do all the things you’re not supposed to do while driving — make phone calls, send texts, check e-mails, read, or even sleep. Such an easy (perhaps even luxurious) commute to work might create more incentive for people to live further away.

“If you make transportation that’s automated and really easy then all of a sudden traveling a hundred miles in a day doesn’t seem so bad,” Crayton says. “And it’s really convenient — you can work in the car. That might incentivize certain behaviors that aren’t good for us.”

Encouraging individuals to walk or bike to work — activities that improve cardiovascular health and reduce the rates of obesity — is a major public health initiative across the country. But the convenience of automated vehicles might result in people walking even less than they do now.

“If people start using their cars more than they already do, that could increase cardiovascular disease, obesity, and diseases caused from lack of exercise and movement,” Crayton says.

At this point, it’s still unclear which technologies will prevail in this new transportation world, creating uncertainty about environmental impacts. “Will these be electric vehicles that don’t produce emissions?” Crayton asks. If so, that could greatly decrease the carbon footprint generated by millions of cars.

But if these new cars aren’t environmentally friendly, the introduction of these vehicles could exacerbate some of our most pressing issues related to environmental health.

While the development of driverless cars is driven by consumers and profit motive, the technology has sweeping implications for health well beyond the intended market, according to Meier.

“Think about Sub-Saharan Africa,” he says. “It has an abundance of land and huge infrastructure challenges. Maybe that could be an area where we build roads exclusively for automated vehicles?”

In many rural, remote areas of the world, lack of transportation impedes economic development. What could driverless cars do for economies (and public health) in those places?

Across the world, from mail carriers to truckers to taxi cab drivers, millions of people hold a job that requires driving a traditional vehicle. Gainful employment is an important determinant for health, according to literature Meier and Crayton cite in their paper. What happens to the health of our population when we no longer need drivers?

“From an economic perspective, people should be concerned about that,” Meier says. “What happens to all the people who occupy these jobs? It’s really important to figure out how to adapt to a new system.”

While this new system may sound like bad news for those currently employed in the transportation industry, it could open whole new worlds for people who can’t drive. Research that Meier and Crayton cite shows that getting out of the house extends your life and your well-being. Autonomous vehicles could provide a whole new level of independence and autonomy for the disabled and the elderly.

But that won’t happen automatically. “We have to make sure that autonomous vehicles are rolled out in a way that gives freedom to aging and disabled populations,” Meier says. “To do that, we need people who understand the relationship between technology and mobility-limited populations.”

How easy is it to use? Is it an app on your phone, or a button on a key chain? Is the technology conducive to people who have vision or hearing impairments? Do local governments subsidize these programs?   ­­­

And what about the national government? Where are they in all of this?

In September 2016, the National Highway Safety Administration published the Federal Automated Vehicles Policy, a major policy guidance on autonomous vehicles and one of the first government documents of its kind.

One obvious concern for public health in the short term is the transition — having traditional, cars and fully automated vehicles on the road at the same time could increase fatalities. “You will see these different types of technologies trying to interact and there’s a chance for adverse impacts there,” Crayton says. Both he and Meier believe the future of transportation will take the shape of a fully automated system.

“There will come a time when people are not allowed to drive their cars any more,” Meier says. “It got to that point 100 years ago when someone riding a horse on a highway put everyone at greater risk — so they outlawed it.”

Meier and Crayton are also quick to point out that this paper is not a comprehensive report. “It’s impossible to fully conceptualize what all this will mean for the world,” Meier says. “Fully understanding it will require many more people working over a much longer period of time.”

But it’s a good start. Outlining the many links between the introduction of autonomous vehicles and the potential impacts on public health is crucial.

“This is what research has always done — anticipate the innovations of the future so we can have evidence based policies,” Meier says. “Without that, we have the potential for huge unintended consequences.”

Travis Crayton is a dual-degree master’s student in the UNC School of Government and the Department of City and Regional Planning in the College of Arts & Sciences.

Benjamin Mason Meier is an associate professor of global health policy and the Zachary Taylor Smith Distinguished Professor of Public Policy in the College of Arts & Sciences.

Their research appears in the Journal of Transport and Health.