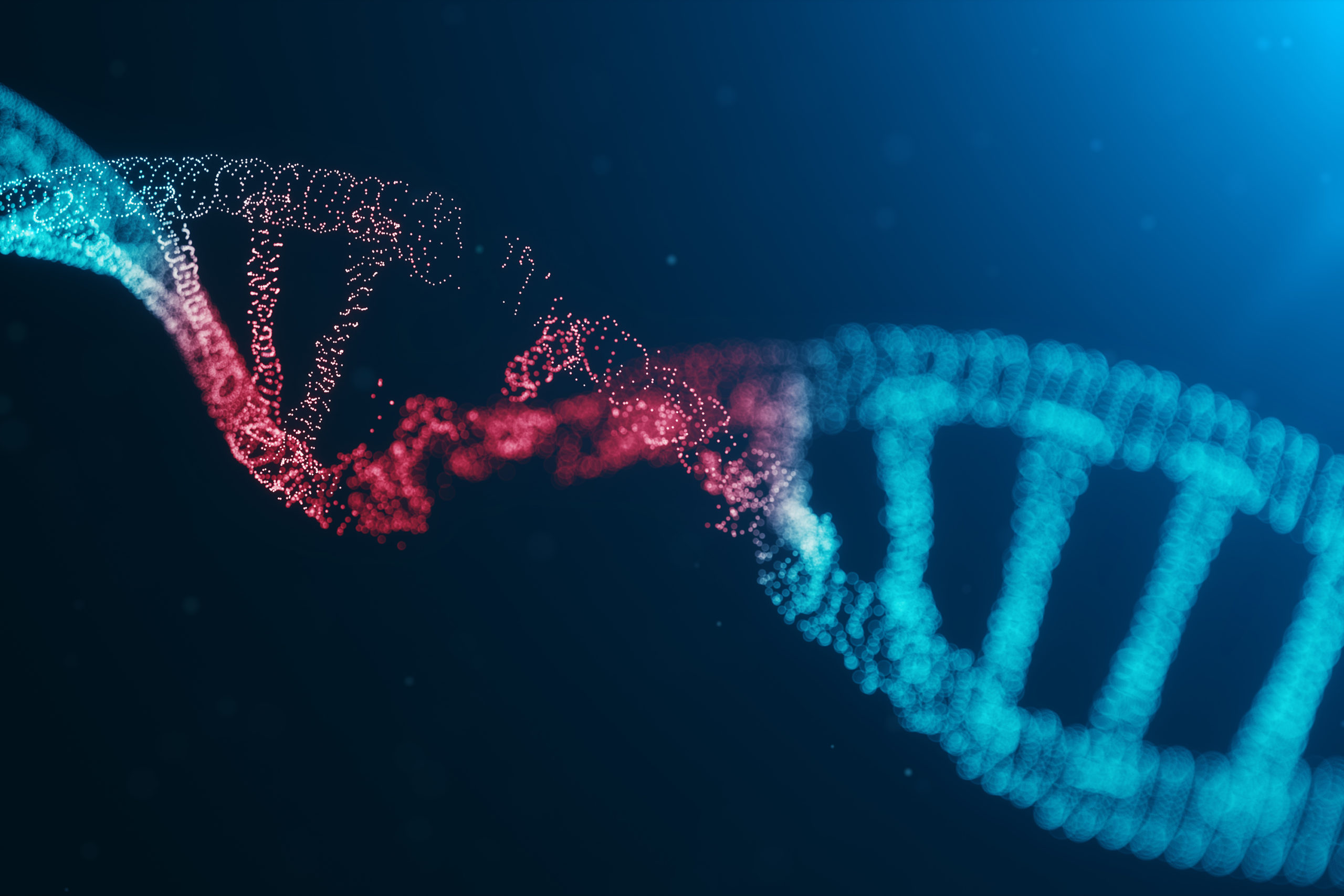 CRISPR-Cas9 technology has potential for broad impact in biotechnologies, diagnostics, and theraputics. Image by Adobe Stock.
By Megan May
Health | Society

When Yoshizumi Ishino and his colleagues from Osaka University discovered an odd DNA sequence of E. coli in 1987, they had no idea what they had stumbled upon. The sequences were palindromic — reading the same forward and backward — but the scientists didn’t understand their function. They made note of the oddity in their completed study.

Fast forward a few years later, and researchers find that the sequence allows bacteria to prevent viral infections. When the bacterium detects the presence of virus DNA, it produces an RNA that matches that of the virus. When this sequence finds its target within the virus, the target DNA is cut and the virus is disabled. By harnessing this natural technique, researchers realized they could precisely cut any type of DNA and conduct specific genome editing. This would have a direct impact on genetic disease therapies, effectively providing a tool kit to fix mutated genes.

“It’s a huge argument that basic, fundamental science needs to be funded. This was a study to see how bacteria deal with viruses, with no thought that it would have any human-health implications,” says Terry Magnuson, geneticist and UNC Vice Chancellor for Research. “It turned out to be probably one of the most revolutionary findings that has ever happened.”

Commercially available since 2012, CRISPR-Cas9 (CRISPR) edits genes by cutting DNA and letting natural processes repair those divides. This allows scientists to add, remove, or alter particular parts of an organism’s genome. Think of it as a geneticist’s “copy and paste” tool. More precise and inexpensive than previous genome engineering, the attributes that make it widespread in the scientific community also expedite the need for ethical consensus among users.

“What happens when the preventive interventions you imagine raise the same kinds of ethical questions that enhancements do?” asks Eric Juengst, director of the UNC Center for Bioethics. “Questions about equal access, effects on the downstream generations, and effects on what it means to be human.”

Juengst explores these and other ethical quandaries as they relate to this gene-editing tool. His work focuses on research ethics — questions raised by new advances in science and technology. He and his colleague, Jean Cadigan, are leading a project that will survey scientists about the professional and social factors that shape the trajectories of using CRISPR in preventive human genome editing. They are also analyzing national and international policy.

Fortunately, this isn’t completely new territory for bioethicists, researchers, and policymakers. Genome engineering has been around for decades. Methods like homologous recombination, developed by Nobel laureate and UNC’s own Oliver Smithies, have prompted ethical discussions time and time again.

Most agree upon the implications behind this technology and the need to proceed with caution. If used responsibly, though, CRISPR can forever alter the way scientists study genes.

“CRISPR’s ability to change the way research is done is comparable to the electron microscope — everybody depends on it now for all kinds of research,” Juengst says. “That’s the sort of impact that this technique could have on basic [science] research.”

While the potential use for CRISPR is vast, UNC geneticist Hector Franco says its application usually falls into one of three categories: biotechnology, diagnostics, or therapeutics.

Farmers and agricultural scientists have been selectively breeding crops for years, trying to yield the most beneficial genetic traits. With CRISPR, they can directly modify strains to make them more nutritious and resistant to drought or pests.

Another project is using CRISPR-modified tomato seeds in a climate-controlled vertical farm setting, much like shipping containers. If successful, this technique would alleviate issues of land access, reducing carbon footprint and the need for pesticides and herbicides.

CRISPR can also be used to detect genetic material, like that of a virus’s RNA. Scientists at University of California, San Francisco and Mammoth Biosciences recently developed a test using CRISPR to diagnose COVID-19. Most testing is currently done via nose swabs and can only detect the virus while it is present in a person. Part of containing COVID-19 is to develop a test that can detect the virus even if a recovered patient was just mildly ill or asymptomatic.

A large portion of CRISPR research is dedicated to curing genetic disease. With over 6,000 known genetic disorders, this feat is still far off. But studies have shown promise in a few specific areas: cancer, hereditary forms of blindness, cystic fibrosis, AIDS, muscular dystrophy, blood disorders, and Huntington’s disease.

Franco, a member of the UNC Lineberger Comprehensive Cancer Center, uses this technology in breast and ovarian cancer research. He and his colleagues compare tumor cells of cancer patients to that of healthy women in the search for differences in their DNA. They then use CRISPR to edit or revert that difference in the tumor cell, either on a dish or in mice, to try to make it more like a healthy cell.

“We get to learn a lot about what makes these cancer cells tick,” he says. “There is a direct correlation between our ability to understand the disease and our ability to design better drugs. With the help of CRISPR technologies we get to probe the DNA of cancer cells in ways that we didn’t have before.”

Franco is hopeful about this tool’s future in precision medicine — when doctors select treatments based on genetic understanding of both the disease and individual patient.

“I think the way we are going to successfully treat each and every cancer patient is through precision medicine,” he says.

Among these studies, Juengst says, is a general consensus in the scientific community about where unofficial ethical divides lie.

“There are kind of two kinds of lines that you shouldn’t cross,” he says. “One is the germline —that is, don’t make changes that would be inherited by future generations of humans. And the other is the line between medical purposes — trying to treat and maybe prevent disease — and trying to improve on traits that are normal and healthy in the first place.”

Lines, though, are bound to be crossed.

In 2018, He Jiankui used CRISPR in human embryos, leading to the birth of genetically altered twins in China. His goal was to modify genes so the children were resistant to inheriting HIV from their father. The creation of these “designer babies” was widely condemned, and Jiankui was sentenced by a Chinese court to three years in prison for forging documents and concealing the true nature of procedures.

Besides altering human embryos, some fear CRISPR may be used one day to create bioweapons or superhumans — dangers that may sound like stuff of science fiction. Juengst advises people to be careful when dismissing such worries, though.

“In the long run I don’t think any of those concerns should be ignored. Everybody’s concerns are legitimate worries,” he says. “But probably what’s not very realistic is the time scale. Mainly, CRISPR teaches us a whole lot we don’t know about genetics when we try to intervene. It’s always more complicated than it seems like it should be.”

A more immediate concern is that of off-target effects — inserting a gene in the wrong place, resulting in new mutations in an organism’s genome. Because CRISPR is affordable, amateur scientists have jumped at the chance to try this technology. This availability means the frequency in which those problems occur will likely increase.

“We need to be careful because we don’t know the unintended consequences of modifying a sequence that will forever exist in the generations to come after that individual,” Franco says.

Answers to these fears and others may lie in regulation, but many policymakers are still racing to catch up.

The two main regulatory agencies affecting CRISPR research in the United States are the National Institutes of Health (NIH) and the U.S. Food and Drug Administration (FDA). Currently, the NIH won’t fund any research in which a human embryo’s genome is edited, and the FDA won’t consider clinical trials for any human germline genome editing.

Because it’s not criminalized, human germline editing is still possible through private funding, Juengst says, but the NIH and FDA act like a double-reinforced barrier. If a scientist obtains private funding instead of relying on federal funding, the FDA can still prevent the study from going into clinical trial.

“All that is on top of what the scientific community says in making its own standards and rules,” Juengst says. “This shouldn’t be underestimated because that kind of peer pressure about what’s responsible basically governs individual scientists’ actions no matter who they work for.”

While Juengst believes the U.S. is at a good starting point with CRISPR regulations, things get a bit messier when it comes to international guidelines. Mainly, because there is no regulatory organization with legal standing worldwide.

Because of this, various international organizations have come together to create their own ethical frameworks.

In 2019, the U.S. National Academics of Medicine and Science and the U.K.’s Royal Society assembled representatives from 10 countries to outline scientific and ethical requirements for the clinical use of human germline genome editing. Prior to the outbreak of COVID-19, this commission estimated a final report would be published this spring.

In addition, the World Health Organization (WHO) has created an 18-member committee of experts in science, bioethics, law, geopolitics, and technology to look at gene editing — both germline and editing that is not passed on to future generations. The WHO estimates a final report will be published in December 2020.

Once guidelines have been developed, it will be up to individual countries to decide whether or not to enforce these restrictions. Juengst thinks it’s a matter of time before more scientists manipulate the human germline genome, so getting ahead of those questions may be beneficial.

“The interesting thing about the committees working on this is whether they will be willing to crack that door and, in some controlled circumstances, start doing research into the safety of germline interventions,” he says. “We’re not going to be able to stop it from [eventually] happening. We might as well know something about the risks we’re facing.”

To do this, he and many others say, would require immense public discussion.

“Then you’d really need the input of more voices and perspectives than just the scientific community,” he says. “And, having that kind of public conversation and engagement is something we’re still trying to figure out how to do.”

Hector Franco is an assistant professor in the Department of Genetics within the UNC School of Medicine and member of the UNC Lineberger Comprehensive Cancer Center.

Eric Juengst is director of the UNC Center for Bioethics and professor in the Department of Social Medicine and Department of Genetics within the UNC School of Medicine.

Terry Magnuson is the UNC vice chancellor for research, founding chair, and Sarah Graham Kenan Professor in the Department of Genetics within the UNC School of Medicine.