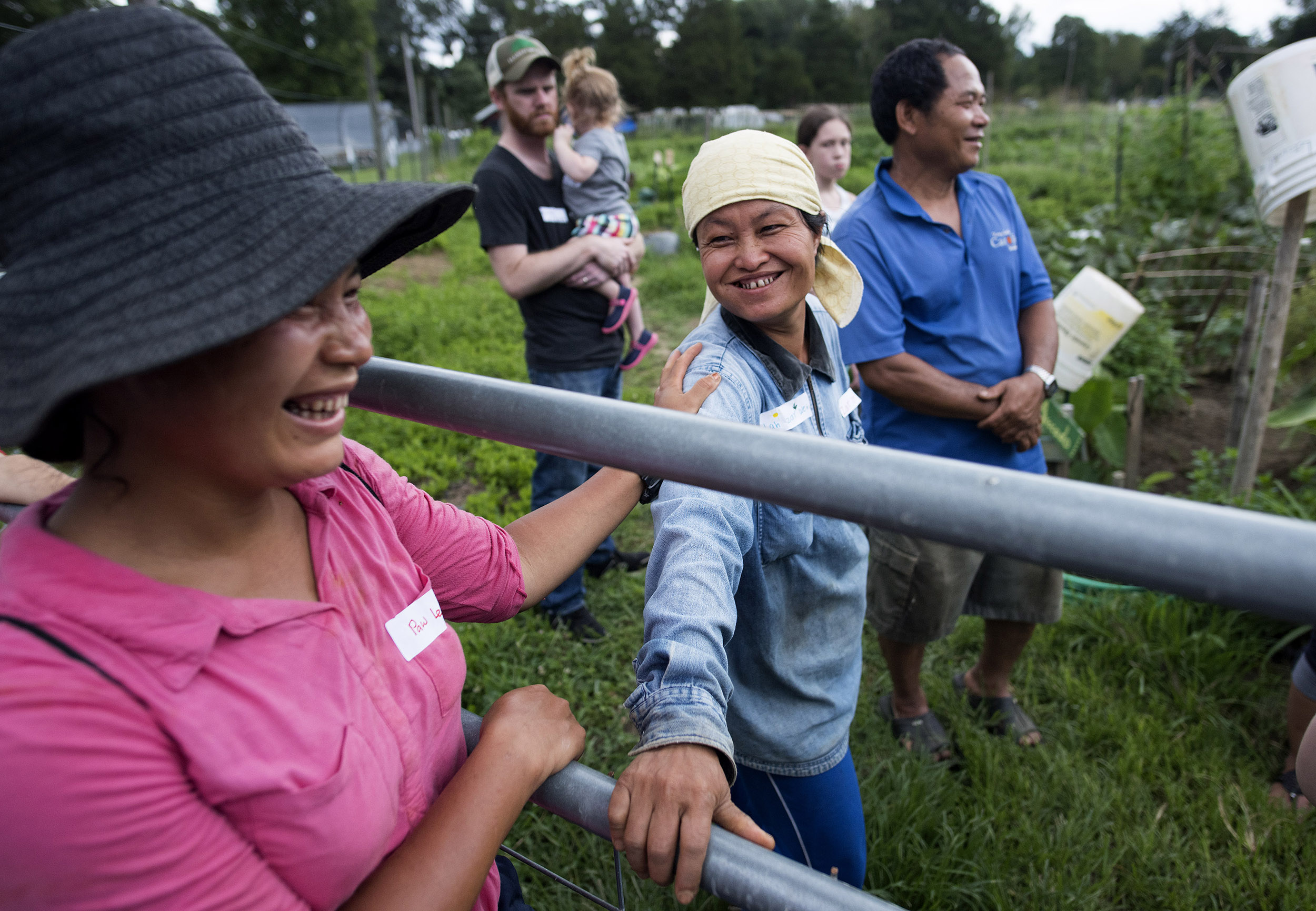 The mission of Transplanting Traditions Community Farm is to provide refugee adults and youth from Myanmar access to land, healthy food, and agricultural and entrepreneurial opportunities. The farmers and families there are often UNC employees as well. (photo by Jon Gardiner)
By Alyssa LaFaro
Society

About 300 miles from Bangkok, Thailand, on the eastern side of the Andaman Sea, sits the Kayin State, located in Myanmar (previously called Burma). It is home of the Karen people, an indigenous demographic that makes up approximately 7 percent of Myanmar’s population, one that has fought for independence since 1949. Each year, the Myanmar military attacks the Kayin State, burning down entire villages and destroying rice fields — pushing more than 100,000 Karen people to seek safety at refugee camps across the border in Thailand.

The camps come with their own difficulties. “We cannot go outside [the refugee camp],” recalls a Karen man who now lives in North Carolina. If you do, he explains, the police will catch you and send you back to Myanmar. “So we don’t have free[dom],” he says.

Not all who flee Myanmar go to Thailand. Some seek safety in the surrounding forest and stay in hiding until the army leaves. Others, like the man above, flee to countries like the United States, which has resettled more refugees from Myanmar than from any other country since 2007. As of 2016, about 1,000 Karen refugees live in Orange County. 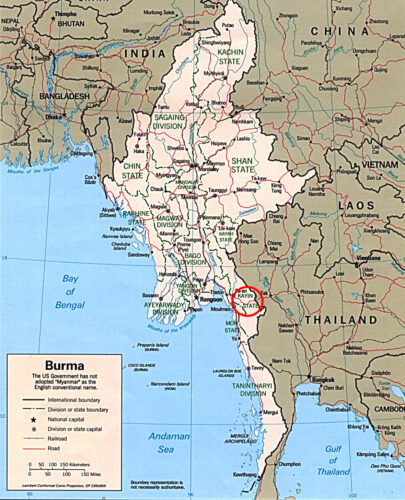 The Kayin State makes up the southwest region of Myanmar, which is bordered by India, China, and Thailand. (map courtesy of the Library of Congress)

“In America […] we can go every place,” the Karen man tells Amy Reynolds, a PhD student in the UNC Department of Linguistics. For the past seven years, Reynolds has worked with Karen people in North Carolina, Georgia, Kansas, and Missouri to understand the early stages of their English acquisition. She has done this, in part, through collecting their oral histories.

Such immense displacement has greatly affected all parts of Karen culture, including their language. Children who grow up in refugee camps are exposed to a mix of dialects and other ethnicities. Those born in the United States, though, often learn to speak English better than their native language.

“Younger generations are switching over to pretty much English only,” Reynolds says. “The parents try to get their kids to converse in Karen, but what usually happens is they talk to them in Karen and the kids respond back in English. As a linguist, this makes my heart break a little.”

While Reynolds strives to uncover how this demographic’s English develops, Jen Boehm — another PhD student in the linguistics department — studies S’gaw Karen accents and how they have changed over time as the population has been pushed out of Myanmar.

“One of the things we see happen — not just in refugee languages but in immigrant languages, in general — is that within three generations their heritage language is not spoken natively anymore, which is very fast,” Boehm shares. “We are seeing that in the Karen community. One thing we’ve heard over and over again from the people we’ve interviewed is that they want to preserve their language.”

Reynolds and Boehm both hope to achieve that with their projects.

The summer after Reynolds graduated high school in 2005, she went on a religious trip to Thailand, where she taught English. She spent two months in a town called Mae Hong Son, which sits on the edge of Thailand’s border with Myanmar. While there, Reynolds learned about the Karen people and the decades-long civil war. She even visited Myanmar — but just for a day, which was all the government there would allow.

It wasn’t until eight years later in 2013, though, while taking a linguistics field methods course at UNC, that Reynolds received the opportunity to work with the large population of Karen people in North Carolina.

“Two local Karen speakers came in and worked with us,” she explains. “They were native speaker consultants, and we were able to ask them a bunch of questions about their language and have them translate different things. When I learned there was a large population here, I was really excited.”

Boehm was also a student in that class. Upon its completion, she began volunteering with Transplanting Traditions Community Farm, which provides Burmese refugee families with a cultural community space to come together and continue agricultural traditions. 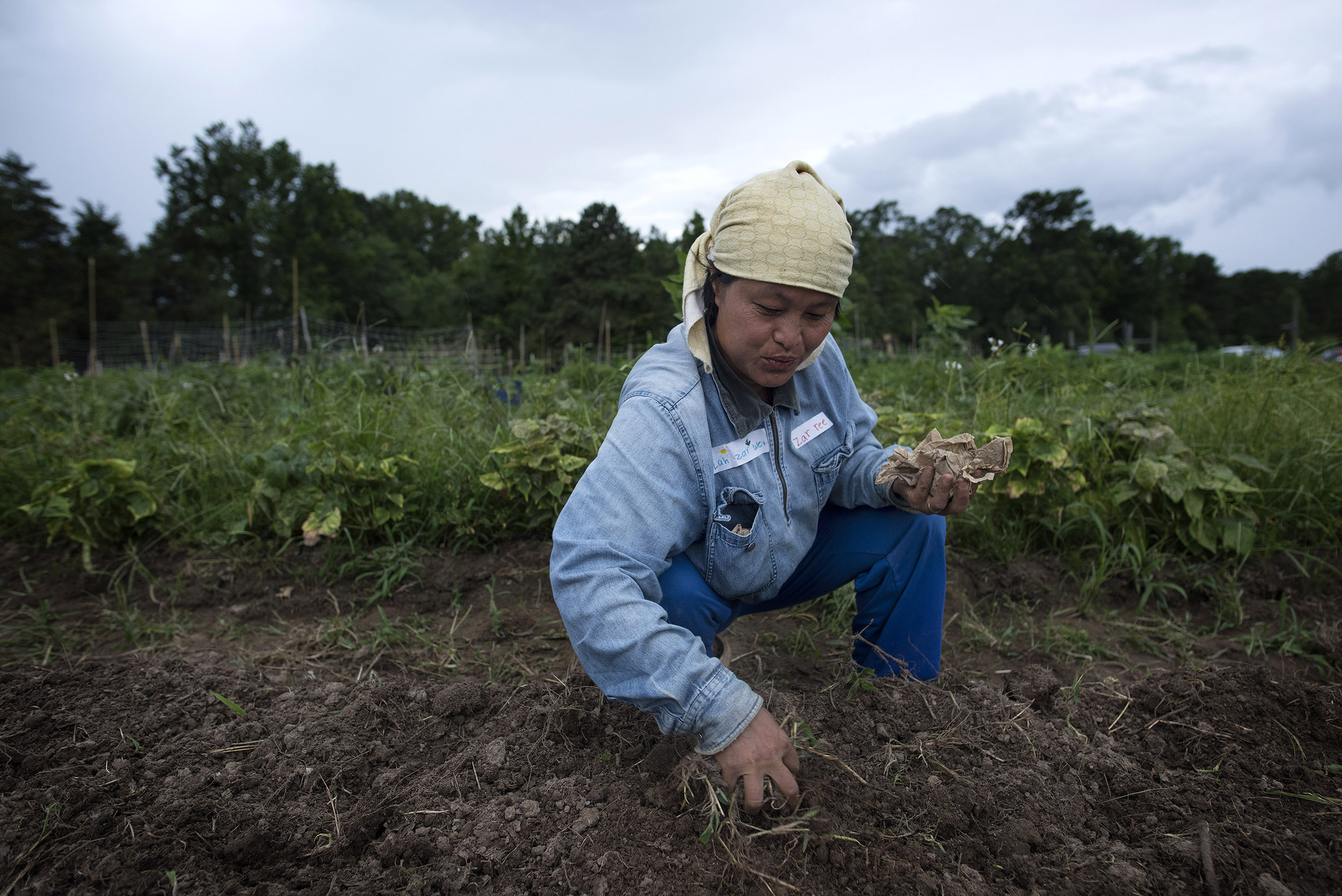 Zar Ree, an employee at Transplanting Traditions Community Farm, rushes out to plant seeds as storm clouds form above. (photo by Jon Gardiner)

One of the most important components of studying another demographic’s language is relationship-building, Boehm emphasizes. “Your research questions should be questions they want answered, and your methodology should hold up cross-culturally,” she says.

Boehm’s relationships with the Karen community at Transplanting Traditions became the foundation for Reynolds’ study, as well. They also partnered with the Refugee Support Center in Carrboro to find additional people for their research.

Many of the participants who responded to Reynolds’ and Boehm’s request for interviews indicated that they wanted to preserve their language and their stories.

“They want people to know who they are,” Boehm says.

In response, Reynolds decided to collect Karen oral histories as part of her project.

Boehm began the joint project interviews by giving participants a list of words to say out loud — a vital activity for understanding accent variation within the population. She did this with about 30 participants from the Triangle and, so far, has pinpointed a few distinctions.

The accents of speakers who grew up in Myanmar differ depending on whether they grew up in northern or southern regions of the country. Each region has its own distinct set of tones and vowels, according to Boehm, and people living in urban centers have slight variations as well. Boehm believes she’s identified about four different accents among this generation of speakers.

Younger speakers, specifically the millennial generation, exhibit parts of all four accents within their speech. Boehm attributes this to growing up in refugee camps in Thailand, where Karen people from across the country lived starting in the 1980s.

“A similar thing happened in Raleigh,” Boehm shares. “Once people started coming here from all these different parts of the country and other countries, the Raleigh accent sort of faded and became this hybrid, leveled-out version.”

Refugee languages are particularly difficult to study, Boehm points out. Because refugees have to flee their homelands, they often can’t take their children back to those places — and that in itself fails to preserve and revitalize the language.

Reynolds is not only trying to understand how Karen people acquire English over time, but more specifically the variety of English they speak. She’s doing this, in part, by looking at their consonant cluster reduction — when the pronunciation of two or three consonants that occur in sequence at the end of a word are reduced into a single consonant.

Unlike English, the S’gaw Karen language does not use words with more than one consonant in a row at the end. S’gaw Karen words often use consonant-vowel syllables. “Data” is an English example. It’s simple and easy to say. Take the word “blind,” though. Native English speakers often drop the “d,” especially when the word comes before another beginning with a consonant, such as “blind man.” Karen speakers, on the other hand, either always drop the “d,” or over-pronounce both consonants, drawing out the “n” and the “d.”

Reynolds wants to know if consonant cluster reduction is consistent among Karen people across the United States. To find out, she’s collected interviews not only in North Carolina but Georgia, Kansas, and Missouri as well.

“I want to know the impact that social environment has on language acquisition and production,” Reynolds says. “My study locations are three very different geographical locations with different varieties of English spoken in each one.”

Reynolds also believes word pronunciation may be impacted by age and length of time in the United States. A previous study on Vietnamese refugees conducted by Walt Wolfram, a linguist at NC State University, suggests that the longer people live in the U.S., the more they pronounce both consonants in double-consonants words. Reynolds is using this study as a comparison for her data.

While English acquisition is the main goal of Reynolds’ research, she strives to collect the Karen community’s oral histories and hopes to develop some sort of repository where she can share them with the world.

“I was so honored to get to hear their stories and record them,” she says.

One participant from Georgia talked about how he and his brother would hide under a basket in their village when the Burmese Army would pass through. When he was still a boy, he told Reynolds, his father and brother were both killed by the army.

Another participant, a woman from North Carolina, spoke more about the everyday struggles she encountered after moving to the United States — things like the language barrier, getting to work on time, learning to walk in the snow, and navigating public transportation.

Moved by these stories, Reynolds strived to find a way to help the local Karen community collect their own histories. She teamed up with Boehm, linguistics professor Becky Butler, and Department of Asian Studies Chair Morgan Pitelka to apply for a Humanities for the Public Good Grant to start an oral history program for Karen teenagers.

After receiving the grant, the team recruited three young women who had worked as interns with Transplanting Traditions Community Farm. They taught them how to use microphones and record interviews, ask effective questions, and create a repository for the collection.

“The interns were really into it,” Boehm shares. “They got to know things about the family members they interviewed that they didn’t know before, which was cool to see. And they enjoyed learning how to ask questions and listen, rather than answering questions — which is something they’d do often because there’s a lot of publicity at the farm.”

While the COVID-19 pandemic has placed some of this outreach work on hold, both Boehm and Reynolds hope to continue collaborating with Karen youth in the future. They also want to finish their dissertations within the next year. Boehm plans to graduate this December, while Reynolds strives to do so next May.

“You could be busy with this research for a lifetime,” Boehm says. “This work documents the loss of the Karen language as it’s happening, and the more we understand how it happens, maybe we can develop measures to slow it down. Documenting that a language is endangered is the first step — it opens the gateway to preserving it.”

Amy Reynolds is a PhD student in the Department of Linguistics within the UNC College of Arts & Sciences.

Jen Boehm is a PhD student in the Department of Linguistics within the UNC College of Arts & Sciences.