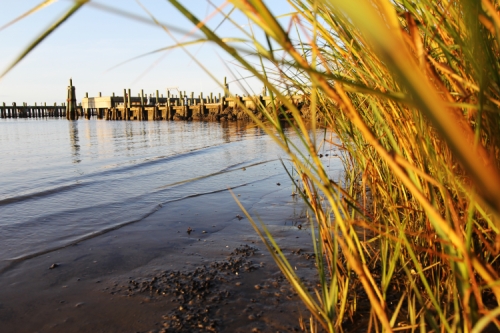 When Todd BenDor was a kid, a bunch of rowdy teenagers poured salt all over his best friend’s lawn. Not surprisingly, the grass died.

“The salt destroyed the fungal community that lives in the soil,” BenDor, now a professor of city and regional planning, says. “In ‘War of the Worlds,’ H.G. Wells talked about how it’s ‘the microbes’ that saved humanity. Well, he was right. In this case, it’s the fungal communities that allow the plants to grow.”

Today, BenDor, whose research was recently cited by President Obama, works as part of a team studying saltwater intrusion — the movement of saltwater from the ocean to the freshwater coastal plain — around North Carolina’s Albemarle-Pamlico Peninsula. The NSF Coastal SEES (Science, Engineering and Education for Sustainability) collaborative project brings together researchers from East Carolina University, North Carolina State University, and Duke University.

Why all the fuss over this area of North Carolina? Well, the Albemarle-Pamlico Peninsula presents an interesting case: The Outer Banks creates a barrier between the salty ocean and the freshwater Albemarle and Pamlico sounds. However, small breaks in the islands provide saltwater entry into the bay. “There’s an ongoing battle of freshwater and saltwater,” BenDor says. “That’s why this area in North America is so unbelievably special — because everything here has adapted to survive. Many of the creatures that live in this area can withstand a fairly decent range of freshwater to saltwater. And that’s kind of amazing.”

But not all life can sustain itself here. Saltwater intrusion can affect the drinking water, lead to flooding, and change the composition of the ecosystem — like crop and timber yields, animal life, and natural filtration. It even affects the economy, as timber companies, agricultural operations, commercial fishing, and outdoor recreation businesses abound on the peninsula.

All is not lost, however, as the saltwater intrusion has yet to become bad enough to cause such drastic changes. That’s why BenDor and this cross-functional team of scientists are studying the problem now. The five-year project, which began in January 2015, will develop a toolset to teach the Albemarle-Pamlico community about saltwater intrusion, present the possible outcomes it can lead to, and suggest a plan on how to sustain the coastal plain moving forward. 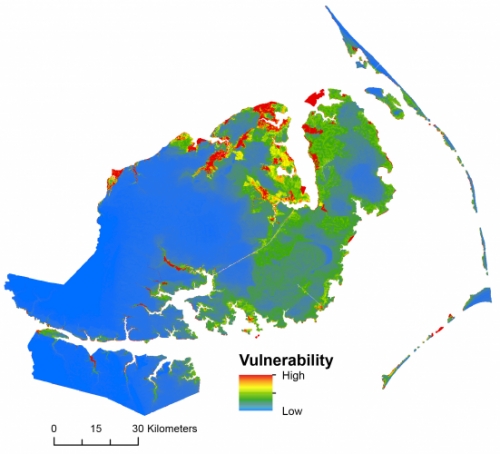 BenDor’s role in the project involves the social science behind saltwater intrusion. “I’m looking at how it’s impacting people, and how people are impacting it,” he says. He and his PhD student, Kristen Vitro, are surveying the Albemarle-Pamlico population — specifically residential landowners, land managers, and community stakeholders in the areas that are subject to salinization risk.

“We are asking these individuals how they perceive this risk, and to what extent (and how) they believe they can mitigate this risk,” Vitro says. “One of the key aspects we are interested in is the timeframe in which risk perception operates. These coastal communities deal with short-term, storm-related issues on a regular basis, so our survey questions focus on how individuals respond to long-term risks associate with salinization.”

Project members hope to learn how to best present information about saltwater intrusion and risk factors to the community and stakeholders, making it easy to understand as well as motivational. “A lot of climate change information is presented in a negative, doom and gloom manner,” Vitro says. “We are interested in communicating risk information as an opportunity for resilience.”

BenDor wants to know how people will react to the news of saltwater intrusion. For example, one landowner’s reaction to this news might be to build a flood wall, “but really interesting things might happen if said landowner does that,” BenDor says. For one, that flood wall could push more saltwater onto the property of neighboring landowners, which would actually change the way saltwater intrusion affects the region. “There are all these opportunities for conflict,” he says, “but if you tell that landowner what that decision could do to her neighbor, she might change her mind about building that flood wall.”

BenDor wants the Albemarle-Pamlico community to be thinking about these things. “There is a lot of environmental communication and education that needs to happen,” he says. “All of these residents, in theory, have some agency in the landscape. You live here, you don’t want to leave, so what are you going to do about it?”

After the five years is up, BenDor and the other researchers hope to apply what they discovered to help residents, community organizations, and local and state governments craft a strategy for dealing with increased saltwater intrusion, whether that’s helping people with relocation or installing levies along the coast. “What we are going to do at the end of this is provide advice,” BenDor says. “Real advice that is useful.”

Todd BenDor is an associate professor and director of the PhD program in the Department of City & Regional Planning at UNC-Chapel Hill.

Kristen Vitro is a UNC-Chapel Hill PhD student in the Department of City and Regional Planning.