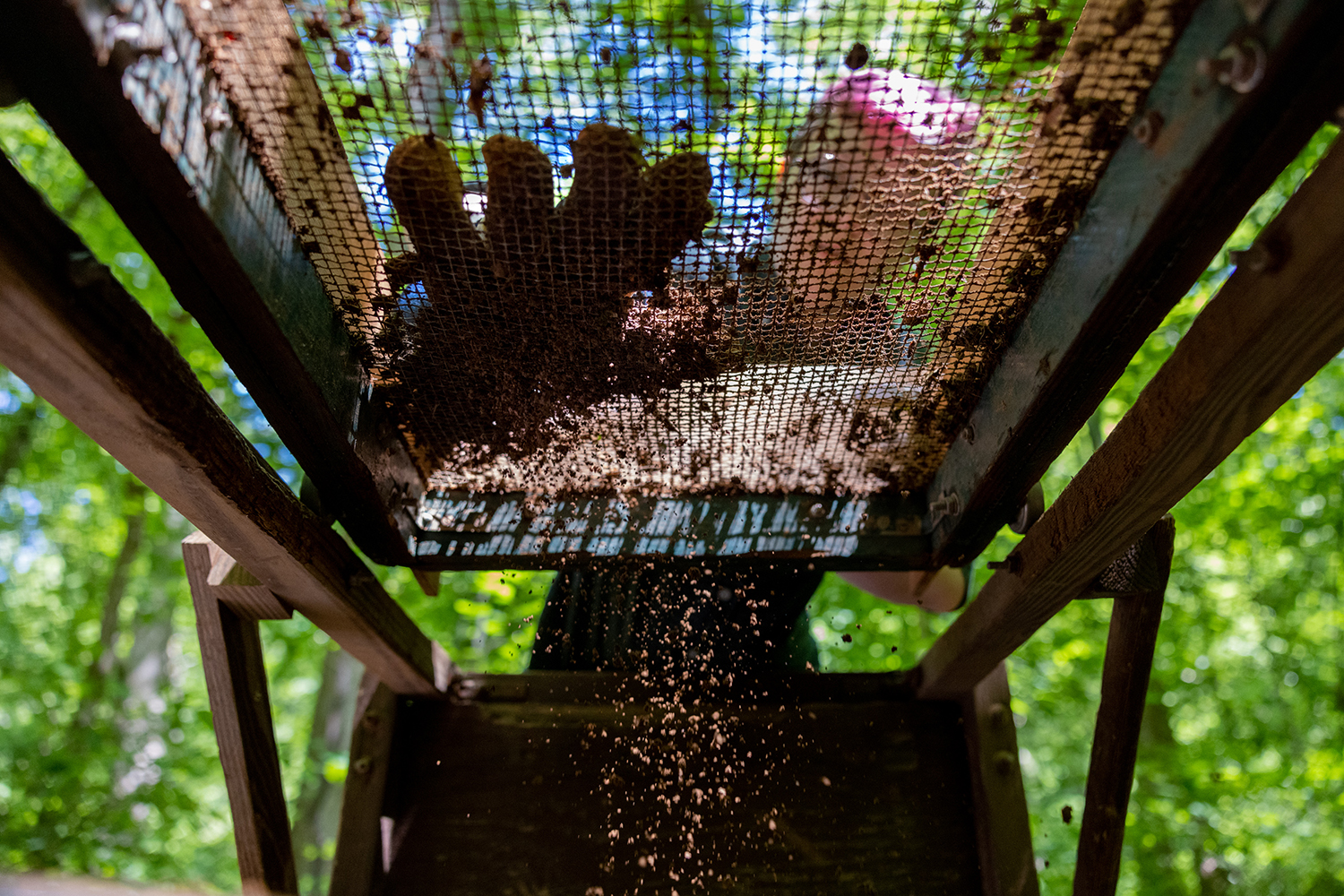 A few weeks ago, Maria Reid found herself at the bottom of a 1-meter pit called a test unit. Using a trowel, she meticulously evened out its walls and floor. By 11 a.m., the temperature was in the mid-80s and humid — and Reid was hot, sweaty, dirty, and exhausted. She was also exactly where she wanted to be.

“I was thinking, I wonder if I could do this with my life,” says Reid, a UNC-Chapel Hill archaeology major who graduated this past May. “I’m 22. It feels like I need to make some big decisions. I think that I could easily do this every day. I don’t know what I’m going to do when this field school is over. I’m going to miss it. I’m going to miss having a shovel and just digging.” 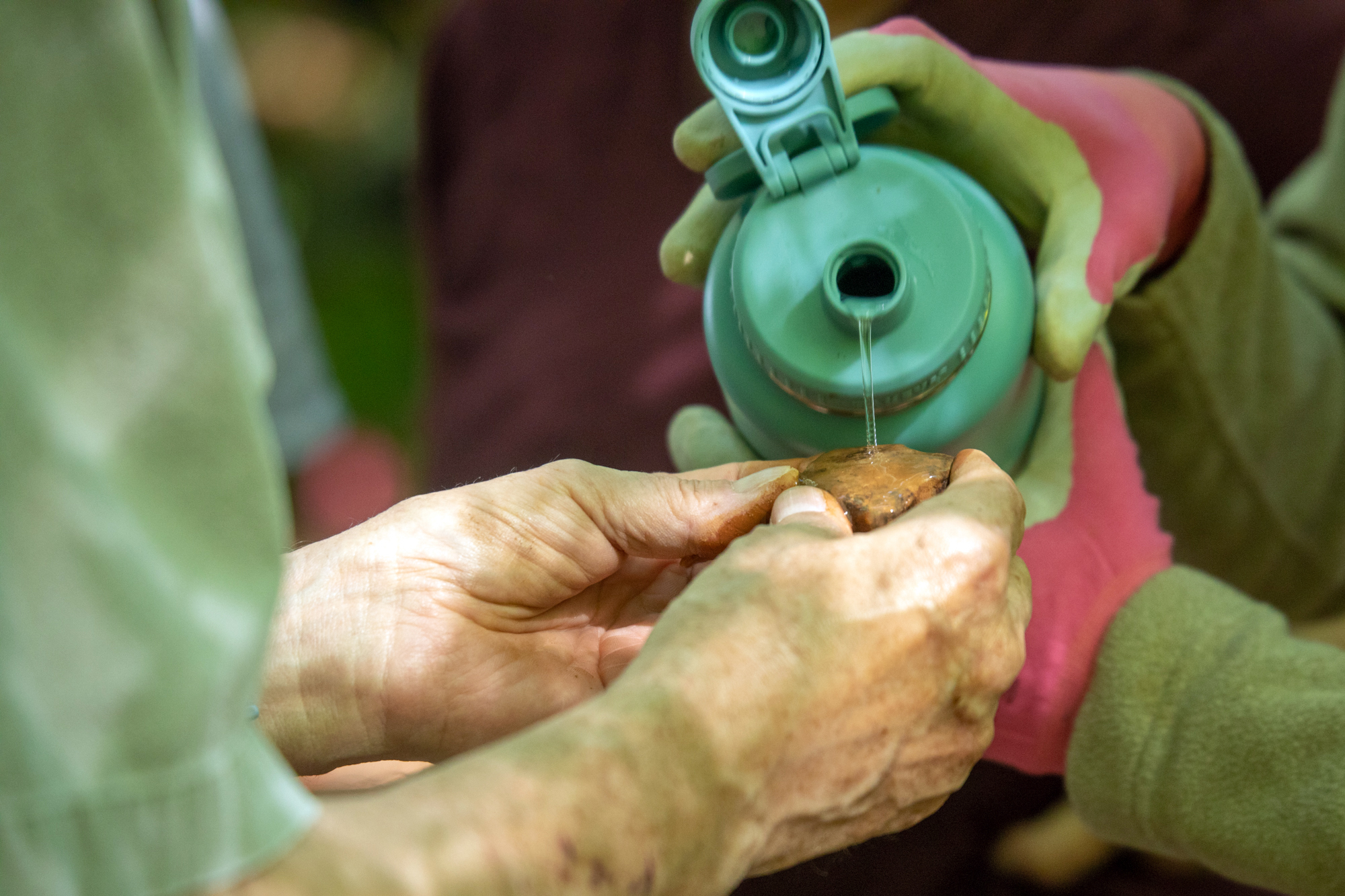 Steve Davis rinses an object found by students before examining to confirm it is a sherd.

Reid was working as part of the UNC archaeology program’s annual summer field school, run by professors Heather Lapham and Steve Davis. This year, the group excavated two sites: one in Duke Forest and another at Ayr Mount, a Federal-style plantation house located east of Hillsborough in Orange County.

At both locations, they were looking for evidence of pre-European indigenous settlements. The group picked the site in Duke Forest based on clues found in a 150-year-old newspaper article that suggested the existence of such an early settlement. Turns out the article was correct. 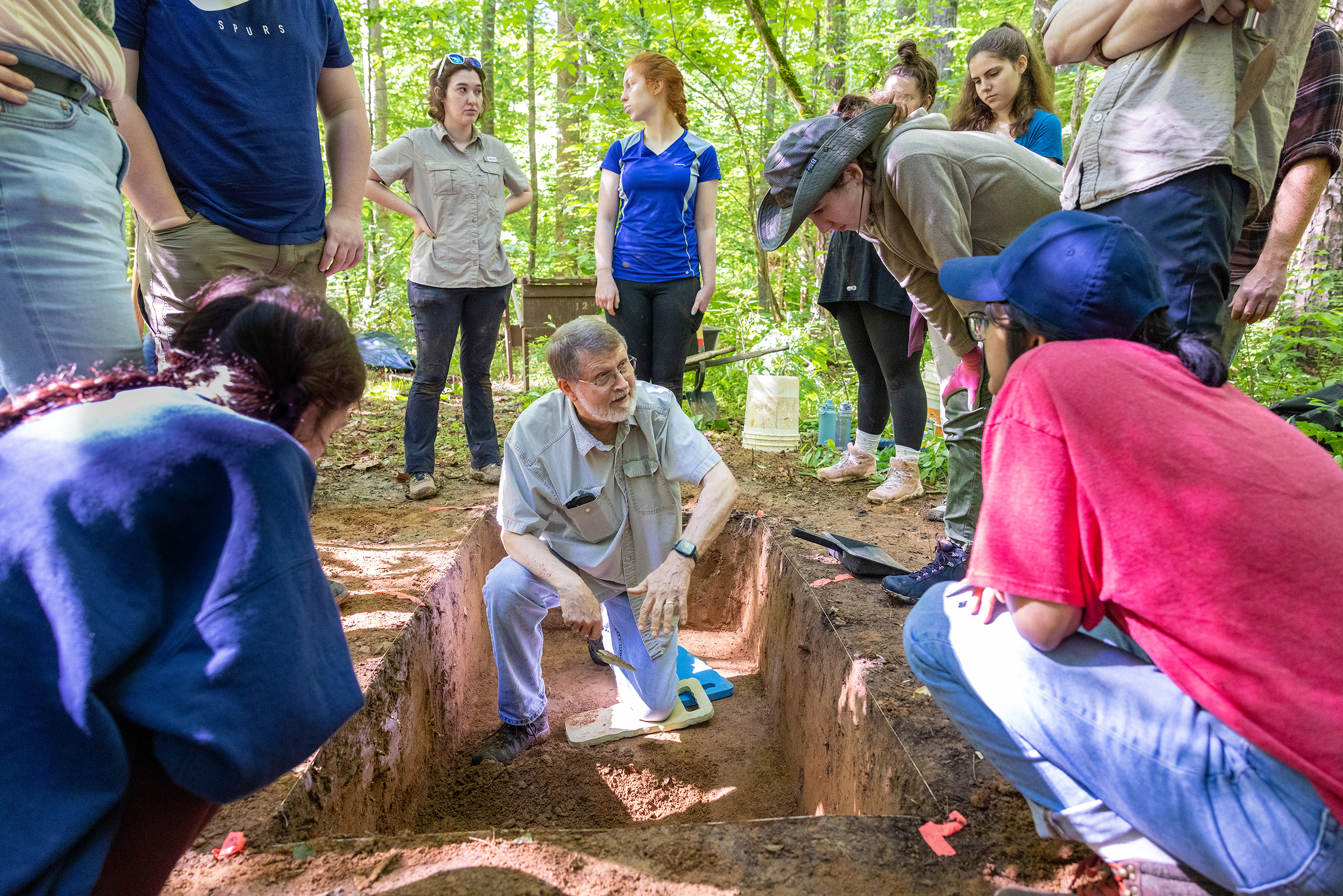 A few meters away from Reid’s unit, students Annie Veum, Elizabeth Maguire, and Bashi Hariharan gathered around a wire mesh sieve positioned over a mound of loose dirt. They were examining a small chunk of clay, trying to decide if the piece was just a plain old rock or a sherd — a broken piece of manmade ceramic material used in ancient pottery.

After some discussion, they brought the piece to Davis, who determined it was indeed a sherd. The students were ecstatic. It was the first artifact these archaeologists-in-training had ever discovered. Even after years of fieldwork, Davis and Lapham still find it thrilling to witness their students’ first moments of discovery. 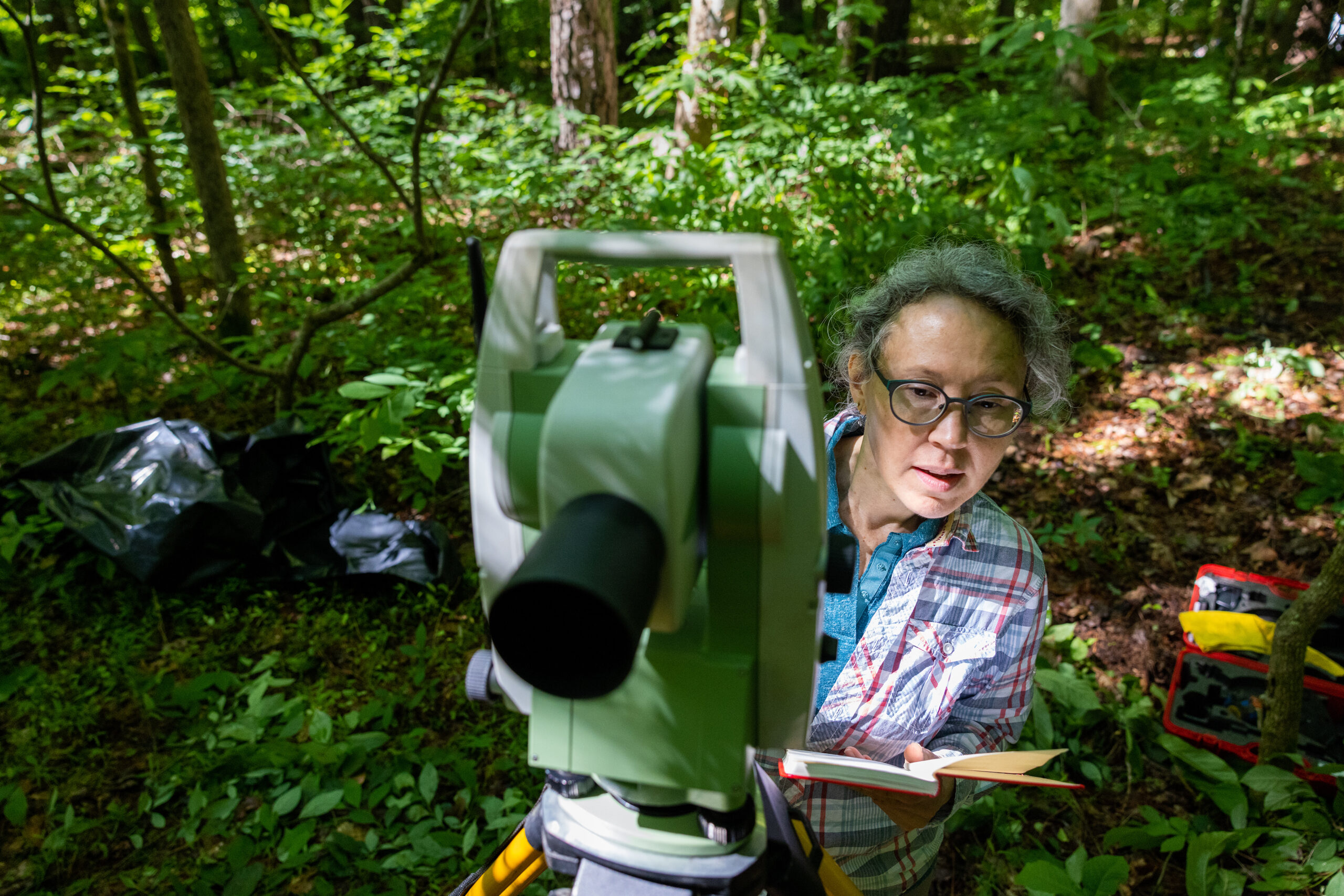 Heather Lapham peeks around a theodolite – a surveying instrument used to measure horizontal and vertical angles as students in the field school clear space for excavation (photo by Andrew Russell).

“You’re introducing them not just to finding artifacts or objects, but also to what archaeology can tell us about people in the past — how they lived, where they lived, what they made and used to not just survive but thrive,” Lapham says.

For Veum, a rising junior majoring in history, the moment illustrated how field school allowed her to experience history firsthand. 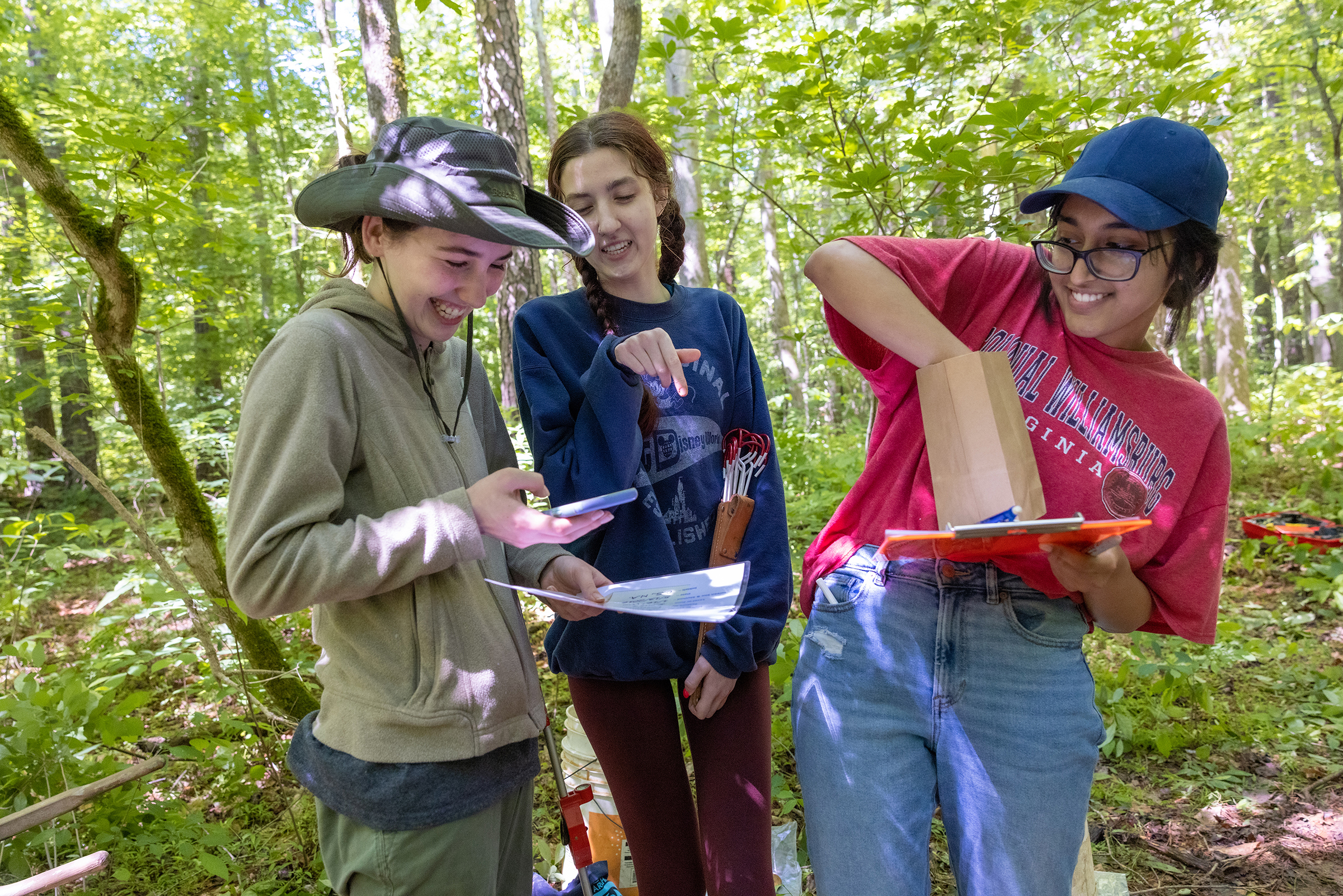 Annie Veum, Elizabeth Maguire, and Bashi Hariharan celebrate after Steve Davis confirms that the artifact they just found in a test pit was indeed a sherd — a broken piece of manmade ceramic material used in ancient pottery (photo by Andrew Russell).

“We were looking at something that somebody made 400 years ago,” Veum says. “It’s like you’re walking on the same ground, especially when we get down into the units. I’m literally walking on the ground they were walking on. There’s just something about it that’s hard to describe. You can picture it: This was used for cooking probably, and then it fell into the fire and broke, and they just discarded it. And now, 400 years later, I’m getting to touch something that was valuable to them. It’s exhilarating.”

Getting that hands-on experience in the field is essential in the path to becoming an archaeologist, according to Davis, who retires this month.

“It’s really the best way for students to get firsthand knowledge of what doing field research is all about,” Davis says. “What the students are learning, you really can’t learn in the classroom. You can be told about it, but you must experience it firsthand to really appreciate it.”

But, he says, it’s important to realize that field school is about more than just finding artifacts. 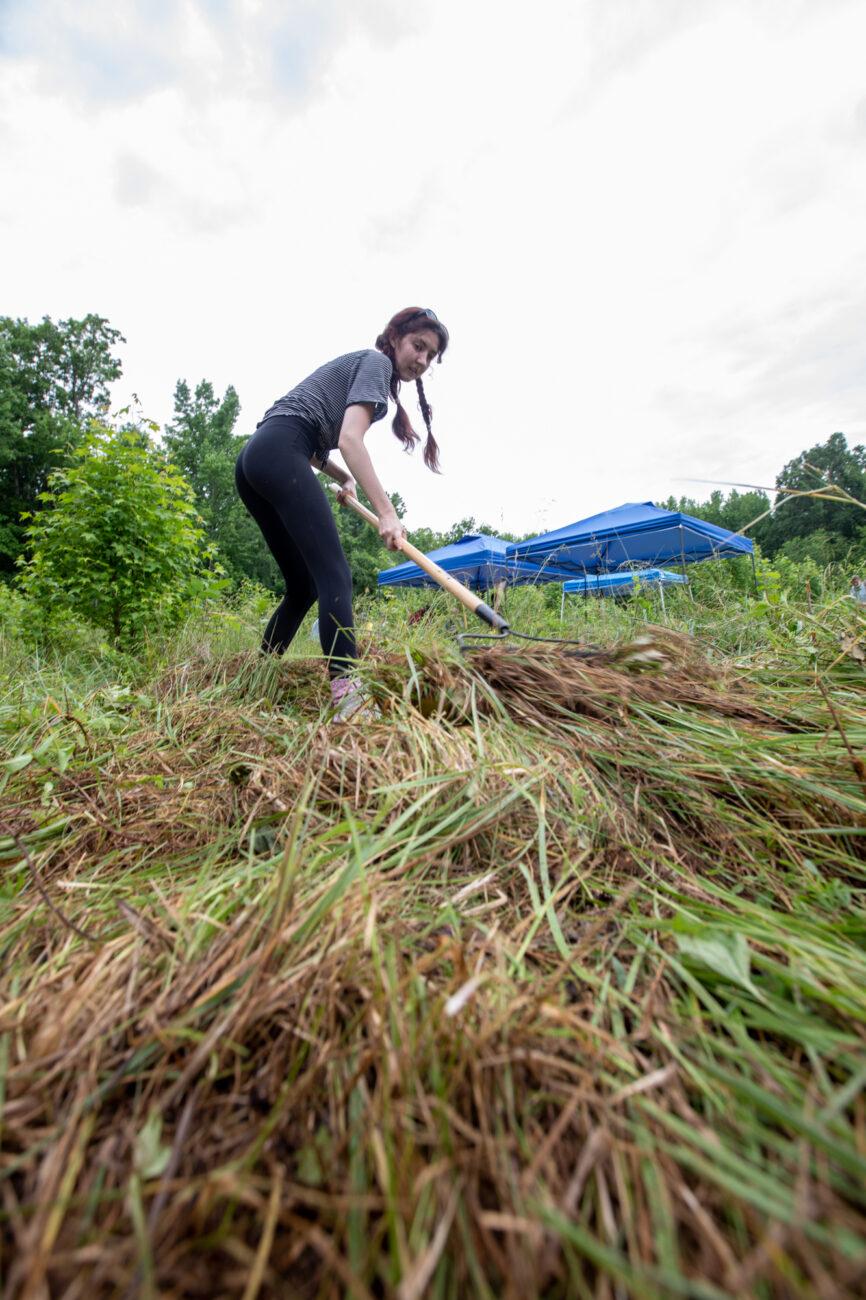 Undergraduate student Elizabeth Maguire rakes grass from her team’s unit so that they can begin digging the shovel test pit and sifting the soil (photo by Renata Schmidt).

“Artifacts are just things, and archaeologists are not out to find just things,” Davis says. “We want to understand the people behind those things, the behaviors of those people that are manifested in those things, in those artifacts. And so, you know, that’s the way you get at it is through context and through the association of artifacts with other artifacts and where you can demonstrate a whole viable kind of contextual relationship between them.”

For Maguire, a rising junior double-majoring in archaeology and anthropology, exploring that context is what draws her to archaeology. Early in her second week, Maguire discovered a large rock while digging her shovel test pit. As McGuire brushed the loose dirt from it, she realized that it was a preformed tool — a rock that someone had started to shape into a tool but abandoned in the middle of the process.

“I’m holding this piece of their lives in my hand,” Maguire says. “I wonder why they didn’t finish it. I wonder if this was someone’s first time making this preform. Were they trying to make a tool? It’s just really fun to think about all the possibilities.”

Reid, who graduated this may, had always wanted to pursue archaeology. She was exposed to the field at a very young age through her aunt, an archeologist working in Greece. 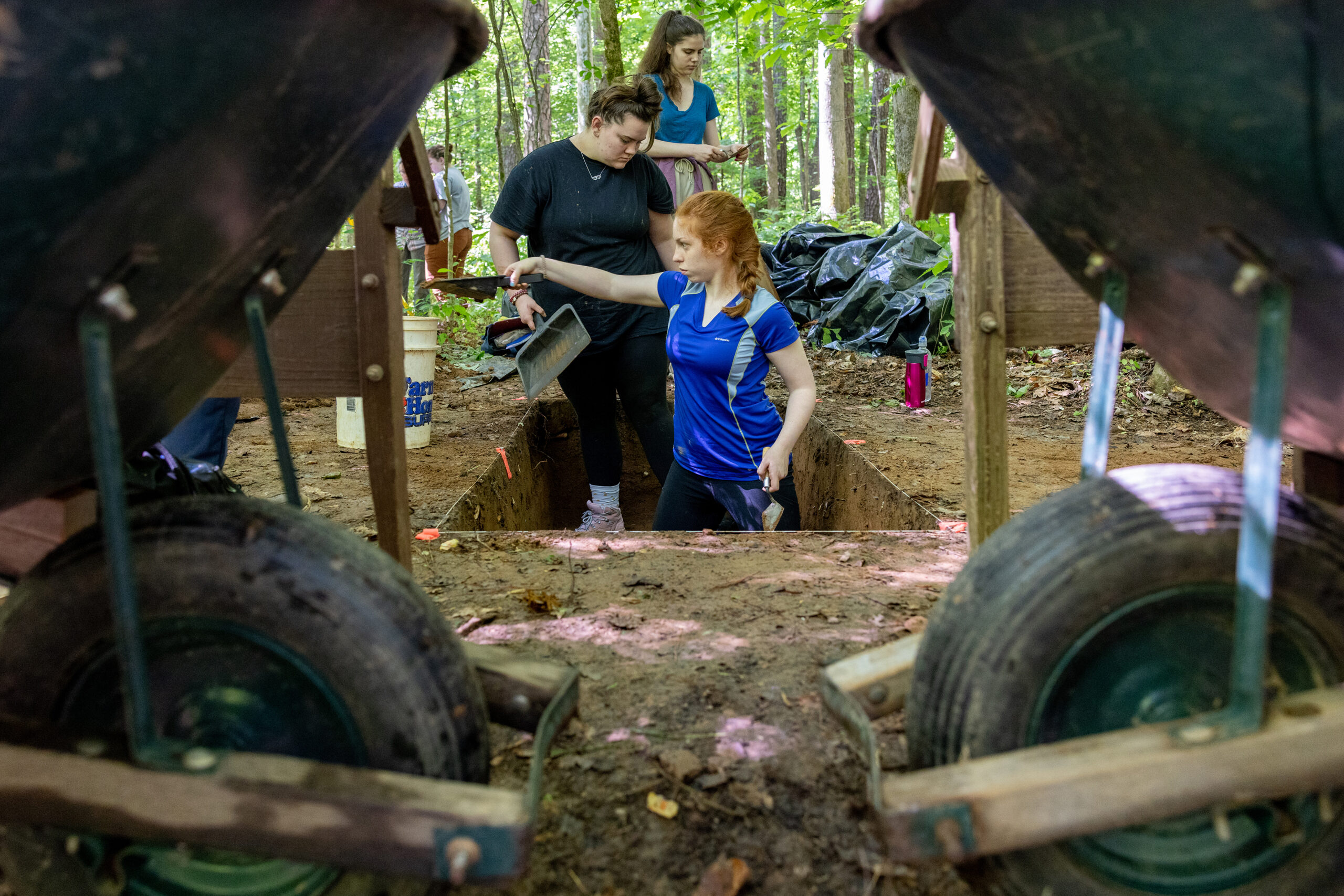 Maria Reid and Caroline Maness clear loose dirt out of a test unit during an excavation at the Duke Forest site (photo by Andrew Russell).

But her experience at field school cemented Reid’s desire to be an archaeologist.

“It feels so cool because this is my first field school,” she says. “I’ve read all about the archaeology. I’ve taken a lot of archaeology classes. But here, just pulling something out of that dirt, it feels like mining for gold, honestly, even though it’s basically a rock. But it’s really something more than that.”

Heather Lapham is the research archaeologist in the Research Laboratories of Archaeology and an adjunct associate professor in the Curriculum in Archaeology in the Department of Anthropology within the UNC College of Arts & Sciences.

Steve Davis retired in June 2022. He was the associate director of the Research Laboratories of Archaeology and an adjunct professor in the Curriculum in Archaeology in the Department of Anthropology within the UNC College of Arts & Sciences.

Maria Reid is a UNC alumna who graduated in May 2022. She majored in archaeology and participated in the 2022 field school.

Annie Veum is a rising junior majoring in history within the UNC College of Arts & Sciences.

Elizabeth Maguire is a rising junior double-majoring in archaeology and anthropology within the UNC College of Arts & Sciences.