It’s 3 a.m. on a Monday morning. Sweet-smelling steam wafts through a large warehouse in St. Pauls, North Carolina. A vat full of golden kernels bubbles while a nearby machine smashes two stones together, grinding the freshly cooked corn into putty. Across the warehouse, the sound of whirring machinery signals the start of a conveyer belt. Hundreds upon hundreds of nearly perfect circles shoot down a production line that transforms them into hot tortillas. Workers busy themselves with stacking and packing the disc-shaped delicacies into boxes, which will be loaded into trucks and shipped out in a few hours. By 9 a.m., patrons are already purchasing the tortillas at local Hispanic markets.

In the United States, tortillas — both corn and flour — outsold white sandwich bread in 2010, according to Tortilla Industry Association Executive Director Jim Kabbani. Two years prior to that, American households consumed more salsa than ketchup. In 2014, tortilla chips grossed $1.3 billion. Traditional Mexican fare has become a staple in U.S. households — a fact that, in part, stems from the country’s growing Mexican-American population, which comprises 64.1 percent of the entire Hispanic populace, according to the Pew Research Center.

Enrique Elizondo recognized the start of these trends in the mid-2000s, so in 2007, he left his production manager job with Tyson Foods and founded Tortillas Carolina in Clinton, North Carolina. He began the business with a small, Mexican tortilla machine that produced approximately 1,500 pounds of tortillas per week. Another machine, a warehouse, and a decade later, he’s producing 25,000 pounds of corn products each week.

“But we have the space, the machines, and the demand to produce 120,000 pounds,” he tells me. “I want to be doing that this spring. I’m ready to grow.” At present, Tortillas Carolina manufactures table tortillas, corn chips, and hot tortillas for restaurants, supermarket chains, and Hispanic grocers in North Carolina and South Carolina. Elizondo is ready to expand his reach throughout the entire Southeast. 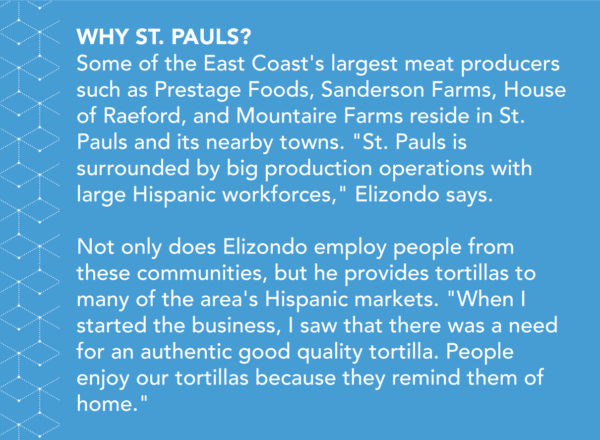 A helping hand for local businesses

“I’ve been really impressed by Enrique and Tortillas Carolina,” Ben Holmes, a second-year MBA student at UNC Kenan-Flagler Business School, says. “He’s servicing a niche market — not only in North Carolina but the Southeast. There’s a real demand for the products, one of their greatest competitive advantages being that they’re made with local, North Carolina corn.”

Since January, Holmes has traveled back and forth to Tortillas Carolina, now based in St. Pauls, as part of his work with NCGrowth — an affiliate of the Frank Hawkins Kenan Institute of Private Enterprise that helps businesses and communities create equitable and sustainable opportunities for their people. Created in 2012 with funding from the U.S. Department of Commerce’s Economic Development Administration and the Kenan Institute, NCGrowth serves economically struggling counties within North Carolina.

“We want to come into a business and take something off their plate that’s critical for growth —something they don’t have time to do,” Basnight explains. Most of the companies she works with are already established with about 10 to 20 employees, but have the operating power and capability to bring in more people. “But we’ve also worked with businesses that have as few as two employees and as many as 2,000,” she adds.

This spring, the organization has partnered with eight different businesses ranging from a day care to a dental product company to a boat manufacturer. Tortillas Carolina was a perfect candidate for the program from the start, according to Basnight. “To me, this project was especially important because of Enrique’s immediate plans for expansion. It seemed critical that Ben started work on this early on — and he was ready to do so.”

Peeking over the hedge

For the last four months, Holmes and Elizondo have worked hard to develop a detailed business plan for the next five years. “Enrique is managing a lot of different aspects of the business,” Holmes explains. “I’m providing a fresh set of eyes to make recommendations and provide solutions.” Elizondo hopes to attract some financing in order to expand the capacity of the business — and Holmes wants to help him take the next step.

To do so, Holmes spent hours researching the state of the tortilla industry, examining the national trends in production, revenue, jobs, and demand. He also delved into the Mexican restaurant industry and the changing demographics in the United States that are affecting the market. “Other cultural trends such as the shift toward more health-conscious eating is also affecting tortilla consumption,” Holmes adds. “It’s been really interesting to learn about that, not only for the purpose of the project but my own, more general perspective.” 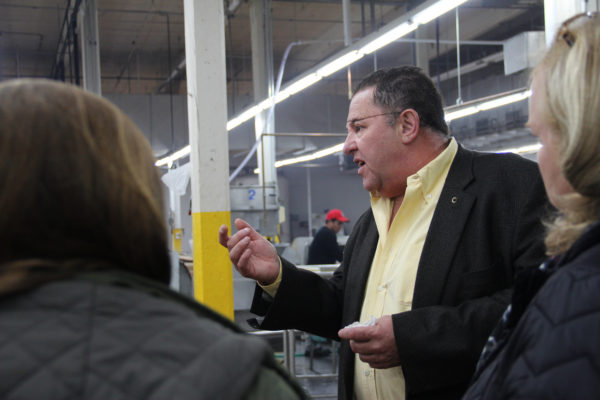 Beyond expanding Elizondo’s business plan, Holmes is helping him understand how the price of corn fluctuates every year. “In North Carolina, we harvest corn once a year, so usually prices are low during harvest season,” Elizondo says. “But as time goes by and we get into the next year, prices start going up. There are a lot of companies and people dedicated to scouting corn — meaning they are looking at how good or how bad the corn crop is for the United States as a whole.”

Through observing these trends, Elizondo hopes to start hedging the price of corn. In other words, he wants to reduce the risk of price fluctuations so he can offer his customers a steady price point throughout the year. “I was pretty excited when Ben began discussing this topic with me,” Elizondo says. “He brings a lot to the table and really understands me when we talk about production. He’s extremely knowledgeable and has been so helpful in putting a business plan together and understanding exactly the way I think in order to accomplish the results I want to see.”

Taking note from the Aztecs

Elizondo’s corn products are not only unique because of the fact that most are made using North Carolina corn, but also because he’s striving to use all-organic ingredients. “People are demanding a quality product using fresh corn,” he says. “The shelf life is never more than three weeks. It’s a tortilla with a clean label, meaning all the ingredients are, as much as possible, organic.” To extend the longevity of his tortillas, for example, Elizondo implements organic vinegar — versus synthetic preservatives — in his recipe to lower pH levels.

“We’re using the same process the Aztecs used,” the Mexico City native adds. “We boil the corn, cook it in hydrated lime to remove the husks, and grind it using big stone plates” — a method that is, literally, thousands of years old. Elizondo uses yellow, white, and blue corn to produce his tortillas. In Mexico, different colored corn grows within different regions, all dependent on the altitude. White corn grows best at sea level, while the golden kernels we’re accustomed to seeing thrive at 6,500 feet above sea level. Blue corn is often found at the highest altitudes, around 8,200 feet above sea level.

Currently, Elizondo purchases yellow corn from growers in Robeson County and white corn from farmers in Mocksville. The blue corn is currently grown in Illinois, but Elizondo has convinced local farmers to grow it here. The first crop is expected to yield later this year. To guarantee the corn’s safety for human consumption, he collaborates with J-Ham Farms & Grain down the street, which stores the corn in its grain elevator and facilitates testing by the North Carolina Department of Agriculture (NCDA). He is also a valued member of Got to Be NC — the official marketing program of the NCDA.

By next year, Elizondo hopes to increase his production to 165,000 pounds of corn products per week. “We think the market demands, probably, six or seven times the amount of corn products we’re currently producing now,” he says. Today, Tortillas Carolina delivers its products to stores and restaurants in both North Carolina and South Carolina, but Elizondo is in talks with potential clients in Tennessee, Virginia, and Washington, D.C.

Elizondo and his wife have also opened a series of small, counter-service restaurants in Clinton and St. Pauls, and hope to see continued success in these outlets. “We started producing tortillas at the same time that customers started asking for something to eat with a tortilla,” Elizondo says. “We created taquerias similar to those in Mexico, with a tortilla machine inside the restaurant that produces fresh tortillas every day.” All four eateries (two in St. Pauls and two in Clinton) are already seeing an uptick in sales just from word-of-mouth marketing tactics.

“I am a true believer that working as a team you will accomplish more — especially when a university is involved,” Elizondo says. “I like to work with young people and hear their ideas. I think being part of NCGrowth has given Tortillas Carolina the opportunity to open its doors to a lot of people, so they’re aware of all that’s going on in the tortilla industry in North Carolina and all the benefits of buying a local product produced with local corn.”

“This guy is on his way,” Basnight says. “I hope he feels like what we have contributed helps him get to where he’s already going. He started this project saying he wanted to produce 80,000 pounds a week and now he’s saying 165,000. I think our program has been validating for him — he knows he’s going in a positive direction.”

Enrique Elizondo is the CEO of Tortillas Carolina, a tortilla manufacturer based in St. Pauls, North Carolina.

Elizabeth Basnight is the manager of the Entrepreneur Technical Assistance Program within NCGrowth, an affiliate of the Frank Hawkins Kenan Institute of Private Enterprise at UNC Kenan-Flagler Business School. She graduated from UNC in 2007 and is a native of Eastern North Carolina.

Ben Holmes is a second-year MBA student at UNC Kenan-Flagler, focusing on finance and entrepreneurship. After graduation in May, he’ll work at Eastman Chemical Company in Kingsport, Tennessee.

NCGrowth is part of the Frank Hawkins Kenan Institute of Private Enterprise. Each year, it partners with businesses, communities, governments, and other organizations to tackle outcome-based economic development and entrepreneurship projects. Originally funded by the U.S. Department of Commerce in 2012, it is now also supported by the Golden LEAF and Z. Smith Reynolds foundations.