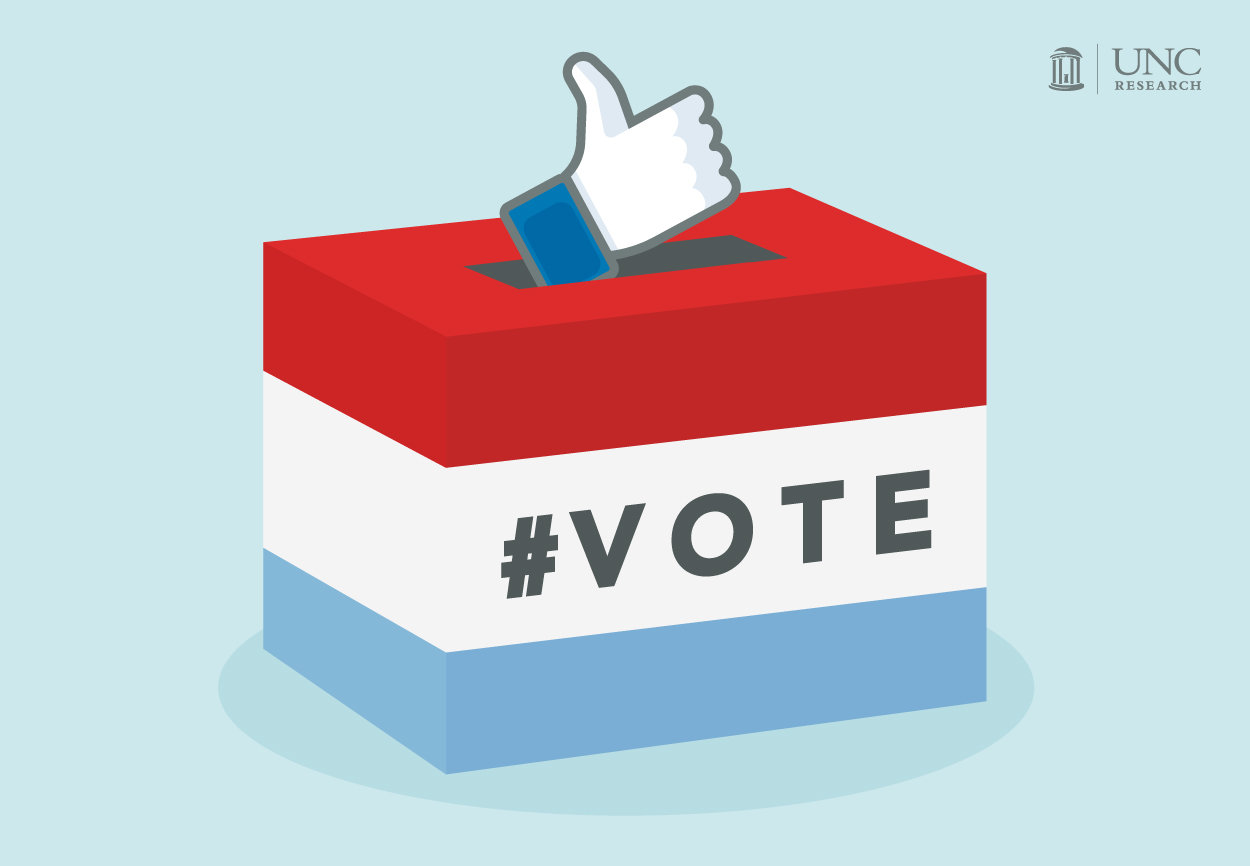 Dozens of people crowd around a glass-enclosed bar in Philadelphia, chatting and sipping cocktails while others immerse themselves in the virtual worlds provided by an Oculus Rift headset. Across the room, others line up to participate in a Facebook Live broadcast and stare at large screens streaming real-time Instagram posts while they wait.

This is not a social media convention. This is Facebook’s meeting space at the 2016 Democratic National Convention (DNC) in Philadelphia — not merely a center for presidential nominees and political debates but also a hub for tech companies. 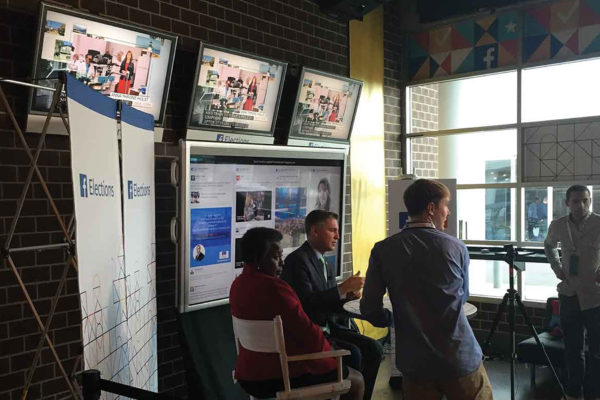 In 2016, Kreiss led a team of researchers to the DNC in Philadelphia to meet with delegates and digital directors to learn how campaign organizers were utilizing social media at the convention. They got more than they bargained for.

“Google had this beautiful, soaring, industrial space called the ‘Power Plant,’ where these hip tech people were listening to presentations by political pollsters,” Kreiss explains. “Facebook set up shop at this gorgeous, repurposed bar, and the Microsoft/Politico Hub had a 3-D printer on display, as well as an oxygen bar. These were swanky places.”

Kreiss’s curiosities about it all began to drive his research in a new direction. Why would these technology firms want a presence at the DNC? Why spend the money to attend and place senior employees in the middle of the action? What sort of work could they possibly be doing?

After conducting in-depth interviews with 14 senior-level digital staffers and representatives from Facebook, Google, Twitter, and Microsoft, Kreiss and Shannon McGregor, an assistant professor of communication at the University of Utah, discovered that these tech companies work behind-the-scenes with campaign organizers to not only uncover which voters to target but how to create custom content to reel them in. As it turns out, these firms take on a strategic advisory role and even hire staff with backgrounds in Republican and Democratic politics to create personal, trustworthy relationships with political campaigns.

Stepping into the political limelight

Political candidates, especially presidential ones, draw the eyes of millions during election years — and tech companies all want that attention, too. Representatives from the firms surveyed told Kreiss and McGregor that their involvement with candidates gives high visibility to the platforms they represent.  They also believe that developing and maintaining positive relationships with candidates, elected officials, and journalists places them in the good graces of people with the power to regulate them in the future.

Beyond products, the firms provide consulting services for troubleshooting problems, creating effective audience engagement strategies, and navigating new tools. “They almost have an in-house political consultant shop,” Kreiss says. “I went into this thinking these tech firms played the role of conduit, a neutral distribution channel. But these firms have dedicated staffers advising candidates on topics like the content that might work best on Instagram — down to a specific photo.”

To help Rand Paul break through the “crowded primary field,” for example, Google put together the concept for a YouTube livestream of a day in his life on the campaign trail. To do this, Paul’s team traveled out to the company’s Silicon Valley headquarters to attend a series of “ideation” sessions.

“We are so close with [campaign staffers] we are typically sitting in their offices or having daily calls,” Ali-Jae Henke — Google’s head of elections — told Kreiss in an interview. “So there is a lot of comfort there. It allows us to have a really great relationship where we can kind of talk through a strategy very openly.”

In a similar fashion, Republican staffers at Facebook worked closely with the Trump campaign to help it run targeted digital advertising.

“A lot of what we’re doing is answering [questions],” Katie Harbath — Facebook’s global politics and government outreach director — shared with Kreiss. “We’re telling them about new products, and so it’s just stuff they don’t know that are even options. […] Here’s the suite of things that you can do, but then a lot of it, too, is: How do I do this? How should I think about that? […] Who do we talk to? How do we figure this out? What do we need to do to make this happen? So then we would start putting them in touch with the right vendors, or give them the tech specs from our side.”

“It became clear that candidates could control their message in a much more direct and effective way on social media than on a platform like CNN,” Kreiss says.

The Clinton campaign, Kreiss points out, housed a massive digital team — more than 200 staffers guiding her through similar digital practices in-house. “But what’s the wisdom of building out a massive in-house team when most of that team is going to be oriented toward social media anyway?” he ponders. “I believe one of the things these firms will help do is level the playing field between candidates with massive in-house teams and those who have much smaller staffs.”

Communicating with the public

“I think the biggest takeaway from this study is that technology firms actively shape the communications that candidates engage in — in far more extensive ways than what the public and, frankly, lawmakers and academics have realized. They are driving this,” says Kreiss, who stresses the need for more disclosure and transparency where digital advertising is involved.

“What should be the rules that govern this space?” he asks. “What rights do citizens have to know who’s speaking to them in the context of an election? What does free and fair elections mean?”

Kreiss and McGregor hope to answer these questions and more in a new book about the role of technology firms in politics down to the state level. Both agree that the use of digital advertising among political campaigns isn’t slowing down any time soon — and the need for additional studies on this topic is more important than ever.

“This is where it’s at,” Kreiss says. “It’s in the tech sector, it’s in social media platforms. This is the future.”

Daniel Kreiss is an associate professor and director of the PhD in Mass Communications within the UNC School of Media and Journalism.

Shannon McGregor is an assistant professor of communication at the University of Utah.