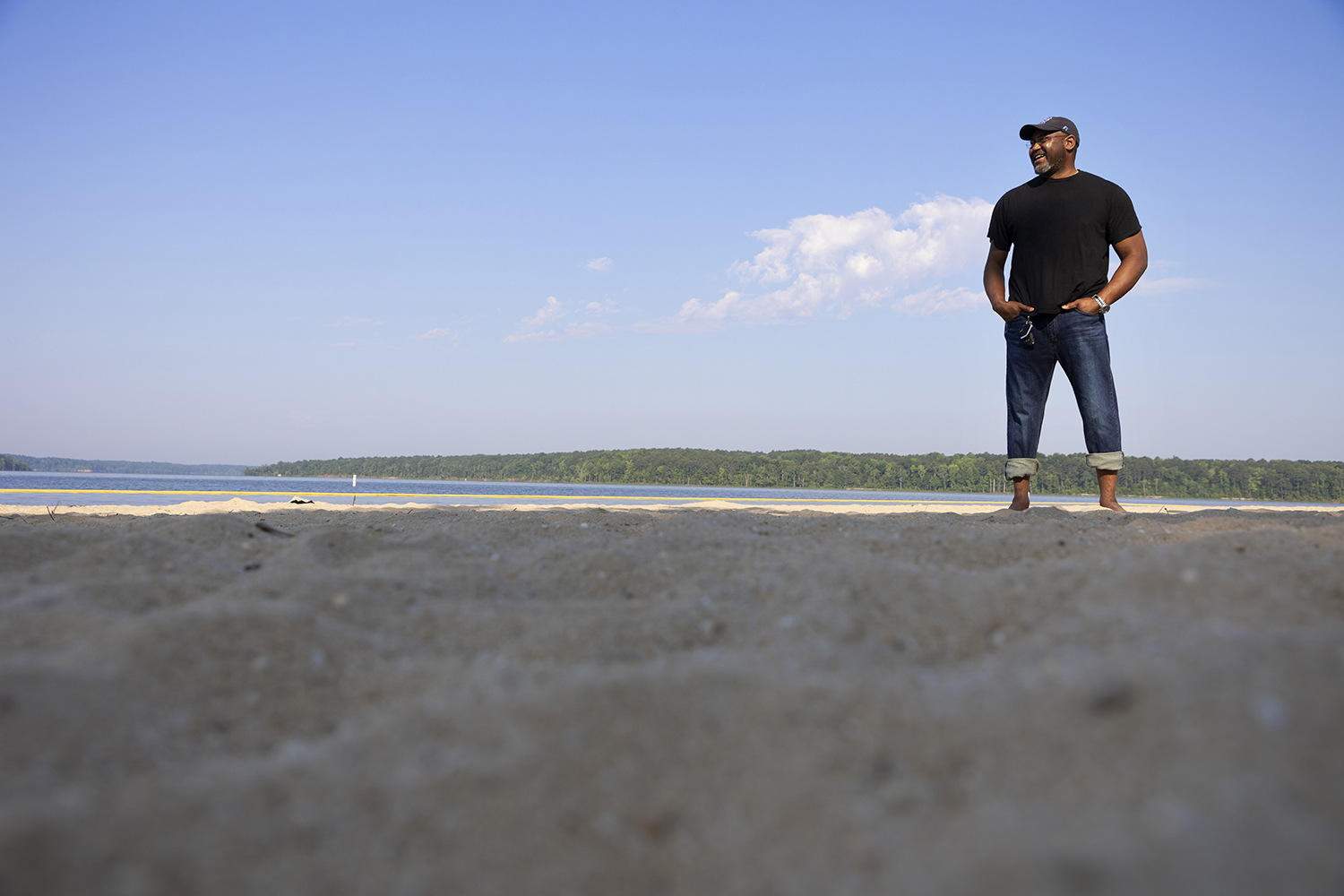 Well, he used to. But not because of sunburns or mouthfuls of saltwater or shorts full of sand. He hated the beach because he has hemophilia.

Hemophilia is a genetic blood-clotting disorder that affects 400,000 people worldwide. It often leads to spontaneous bleeds in soft tissue, like muscles or joints. If a bleed is bad enough, a joint might swell to the size of a watermelon — so people with hemophilia often develop arthritis. They self-administer shots filled with clotting factor when a bleed occurs and undergo regular treatments for the disorder. Harrison has spent most of his life infusing himself intravenously with clotting factor three times a week.

So whenever Harrison would go to the beach, he’d worry about rolling an ankle from walking on the sand. 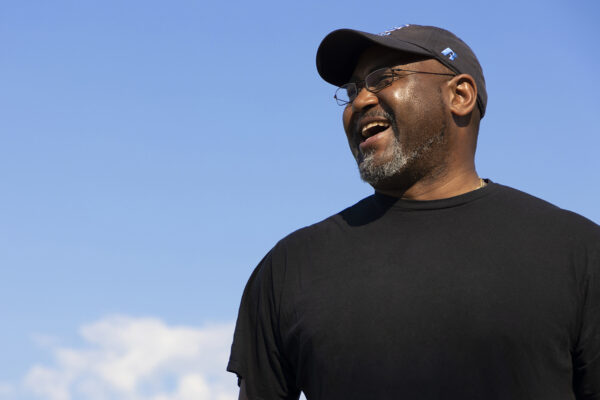 “I’d actually look for compacted sand because it hurts so badly to walk on,” he shares. “I’d walk out, find a spot, put down my blanket or chair, and then my wife would go play in the water and I’d just sit there. And I’d dread the thought of having to get up to go to the bathroom or packing up to get out of there.”

Today, Harrison stresses a lot less. In 2018, he began participating in a clinical trial at UNC-Chapel Hill for a gene therapy treatment from pharmaceutical company BioMarin. Harrison received one four-hour infusion of the medication — and hasn’t had a bleed or any infusions since. That was nearly four years ago.

Harrison is one of 134 people from across the globe who participated in the BioMarin clinical trial — the largest-ever Phase 3 gene therapy study for adults with severe hemophilia A. If the company receives FDA approval for the treatment later this year, it will be the first hemophilia gene therapy to ever be licensed.

“Gene therapy has had a huge effect on these patients,” says Nigel Key, leader of the BioMarin clinical trial at UNC and director of the UNC Blood Research Center. “It’s changing people’s lives.”

Before the 1960s, the average lifespan of a person with hemophilia was 11 years old. Today, that number has increased to 68 — just 10 years shy of the average life expectancy for men in the U.S. This is partly due to the work of UNC researchers who have dedicated their lives to the disorder, unpacking how it occurs, developing treatments that could be administered at home, and creating drug-delivery systems that could lead to a potential cure.

Carolina’s involvement in hemophilia goes well beyond participation in clinical trials. UNC researchers have been working diligently to treat the disease since 1947, which has led to incredible advancements in the field.

Kenneth Brinkhous and his lab were instrumental to this work. In 1953, they developed the first test, called the partial thromboplastin time test, to identify hemophilia — hundreds of which are now completed each day at UNC Hospitals alone. Further milestones included the discovery of clotting factor IX in 1955 and development of the first factor VIII concentrate in the 1960s, which was subsequently licensed and commercialized by Baxter-Hyland. 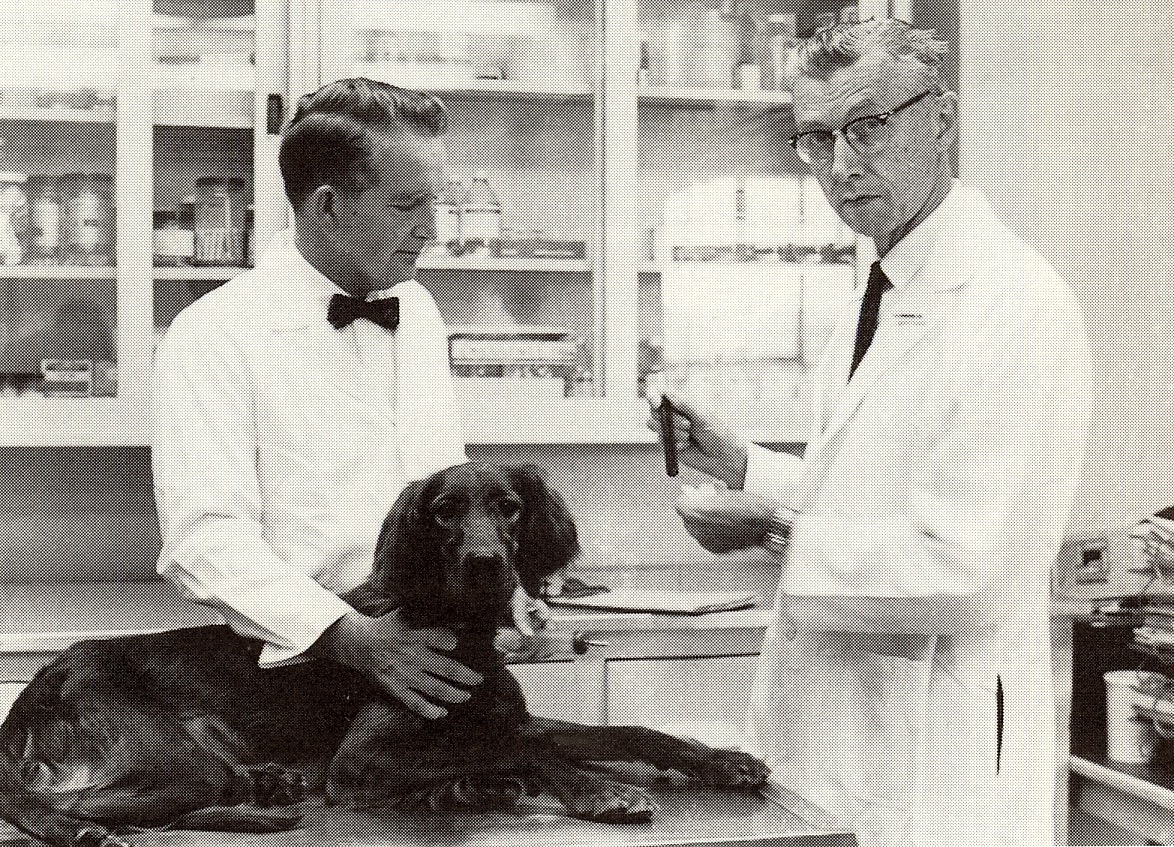 Kenneth Brinkhous (right) began studying the first known canine carriers of hemophilia in 1947. His research with dogs led to the creation of a blood laboratory, known today as the Francis Owen Blood Research Laboratory — which led to multiple advancements in hemophilia including a blood test, treatments, and knowledge of the disease.

When scientists in Boston and San Francisco figured out how to genetically engineer the missing clotting factor for people with hemophilia A, researchers at UNC grabbed at the chance to participate in the clinical trial and administered the first dose in the world ever given to a human. The treatment, called recombinant Factor VIII, was licensed by Baxter and Bayer in 1992.

Carolina researchers have also played a role in developing treatments for people with hemophilia B, Von Willebrand disease, and hypercoagulation — when the blood clots too much.

By the late 20th century, gene therapy research began to attract attention in the medical world as an innovative treatment option for many. The technique introduces healthy genes to replace or fix broken ones to, ultimately, treat or cure diseases.

Samulski came to UNC in the early 1990s to lead the new Gene Therapy Center, which opened in 1993. At the time, he was only 39 years old. But he’d already made a huge discovery.

Over a decade earlier, as a PhD student in Nicholas Muzyczka’s lab at the University of Florida, Samulski began looking for a virus that could be transformed into a gene-delivery system. That’s when he and his lab mates stumbled upon the adeno-associated virus (AAV), which met three important criteria: It infected humans, it didn’t cause disease, and it’s genetic payload could persist in cells, meaning it stayed in the body indefinitely. Samulski’s job? Manipulate it so that it could deliver genes.

Samulski transitioned to Princeton, where he continued working with AAV as a postdoctoral researcher. There, he and his lab stripped away 96% of the virus’s genome, giving it enough space to carry potentially therapeutic genes and be packaged in the virus shell that acts as the gene-delivery vehicle. This form of AAV continues to be one of the most successful gene-delivery systems in the world — and it’s what BioMarin’s gene therapy treatment for hemophilia uses. But getting AAV right was 20 years in the making.

Samulski was recruited to Carolina to perfect the basic science behind gene therapy, which eventually strengthened the university’s position as a leader in genetics. His lab focused on hemophilia B, a clotting disorder caused by a shortage of factor IX protein. About 20 percent of people with hemophilia have type B. The rest, like Brent Harrison, have type A, caused by a shortage of factor VIII.

In the mid-90s, under Samulski’s guidance, UNC pediatrician Paul Monahan began experimenting with AAV as a gene therapy tool for hemophilia B. The goal: to get AAV to deliver factor IX to the liver, where most of the body’s clotting factors are synthesized.

“AAV is kind of this Trojan Horse that we load up with Greek soldiers, which is the DNA for factor VIII or IX,” says Key, who has spent 30 years studying bleeding and clotting disorders and has worked in collaboration with both Samulski and Monahan at Carolina.

When it came time to test Monahan’s viruses, biologist Darrel Stafford developed a mouse model of hemophilia B and Tim Nichols provided access to the established — and incredibly successful — dog lab that Brinkhous began in the late 1940s.

Eventually, Monahan’s research was part of the science that helped launch Samulski’s spinout company, AskBio, in 2001.

Additionally, AAV has been instrumental in gene therapy for hundreds of diseases. It has also led to the approval for two commercially available treatments, one for a form of retinal blindness called Leber Hereditary Optic Neuropathy and another for spinal muscular atrophy.

Looking to the future

Key believes the next step for Carolina’s involvement in the hemophilia world is to create a physical place where patients can receive the gene therapies — and other innovative treatments, like protein therapies — as they become available to the public.

“I think UNC has a tradition of hemophilia here that we need to keep up,” Key says. “Translating these therapies into actual treatment centers is the next step.”

As for Harrison, he’s already volunteered to participate in BioMarin’s follow-up study to the gene therapy clinical trial, which involves a liver biopsy to see how AAV persists in liver cells and produces clotting factor — critical information for continuing to improve treatments.

“There’s a lot of altruism required on the part of the patient to participate in these clinical trials,” Key shares. “It’s not just self-interest; it’s for the next generation of hemophilia patients. And Brent is a good example of that.”

Harrison has only found benefits from participating in the clinical trial. He’s “praying and hoping” that the BioMarin gene therapy lasts for a long time.

“If I have to go back to treating and doing injections, that’s not a problem. I’m an old hat at this,” he admits. “But I would really like to not have to. I’ve gotten a taste of the good life.”

So good, in fact, that he and his wife are looking to Aruba for retirement. It seems he really doesn’t hate the beach anymore.

Brent Harrison is a participant in the BioMarin Phase III global clinical trial for patients with severe hemophilia A.

Nigel Key is the vice chief of hematology and the Harold R. Roberts Distinguished Professor in the Department of Medicine within the UNC School of Medicine. He also directs both the UNC Blood Research Center and the Hemophilia and Thrombosis Center.