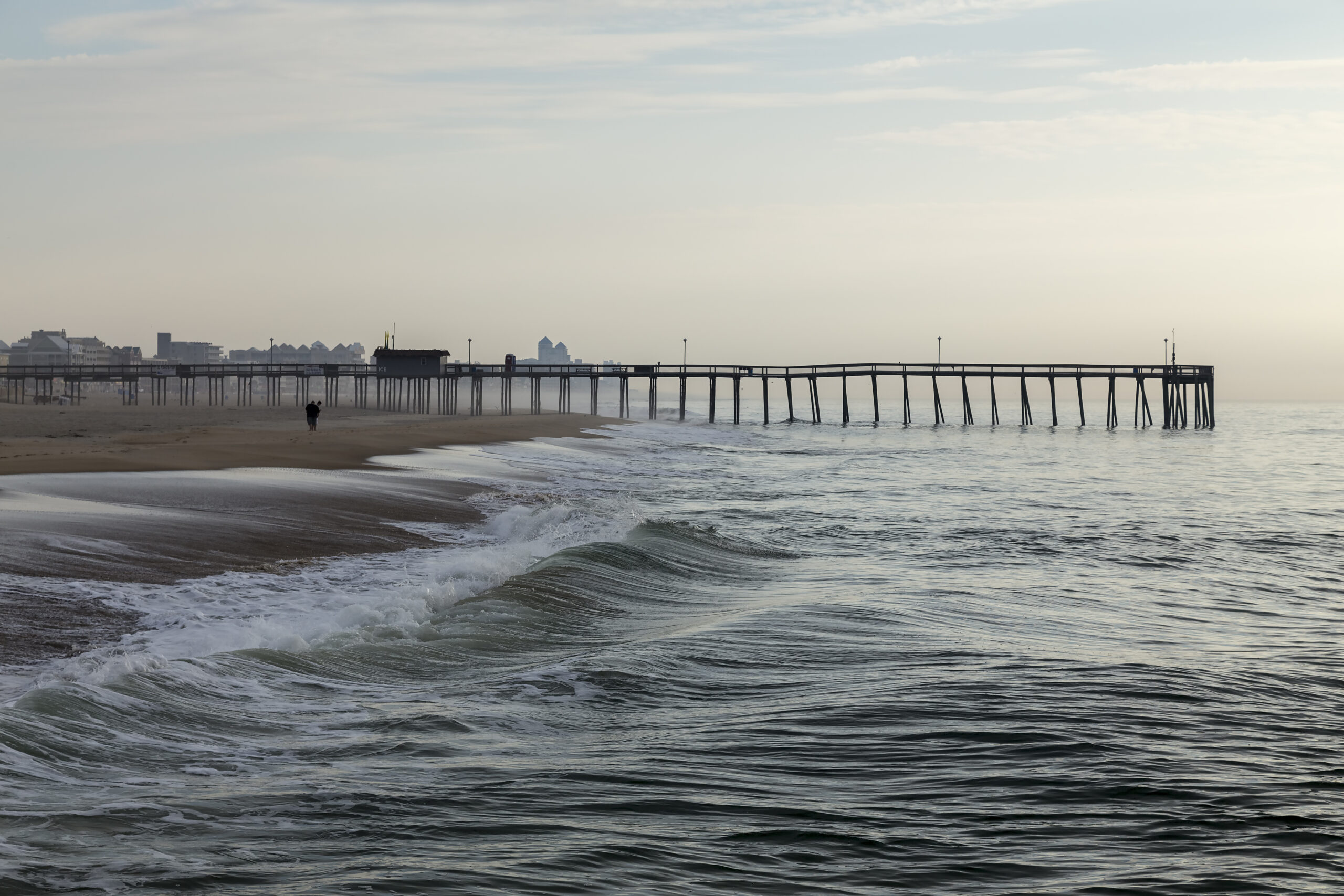 Rip currents can form around breaks in sandbars or humanmade structures and easily drag swimmers out to sea. Tens of thousands of rip current rescues and an average of 100 deaths occur annually in the U.S. from rips (photo by Acroterion/Wikimedia Commons).
By Megan May
Earth | Invention | Society

As a UNC graduate student studying marine sciences, Greg Dusek decided on two requirements for his dissertation: That the research was related to coastal oceanography and that it would help the public.

Now a senior scientist at the National Oceanic and Atmospheric Administration (NOAA), Dusek is working with colleagues to put the finishing touches on what has evolved into a rip current model for the Nearshore Wave Prediction System (NWPS). Both the model and NWPS provide predictions every hour for every kilometer along the U.S. coastline.

Normally, ocean waves push water up the shoreline and retreat in a fairly uniform fashion. A rip current can happen near breaks in sandbars or humanmade structures. Some waves can break differently, leading to differences in wave height and the formation of a fast current at a perpendicular or acute angle to the shoreline. The resulting rip current can drag away swimmers. Tens of thousands of rip current rescues and an average of 100 deaths occur annually in the U.S. from this phenomena.

Left: Greg Dusek, now a senior scientist at NOAA, created a rip current prediction model as a graduate student (photo courtesy of Greg Dusek). Right: A rip current is seen with the use of harmless green dye (photo by the Coastal Studies Institute).

“We recognize that you can have a great model at predicting a hazard but if it’s not reaching people in the right way it’s not going to make a difference,” he says. “One focus at NOAA is improving messaging so people know what to look for, understand the conditions that rips form under, and how to escape safely if they get caught in one.”

Previous models were updated once or twice a day with short prediction times, geographically confined, and defined by broad ratings of low, medium, or high probability.

“The initial system the weather service was using was better than nothing. It provided some information, but it was really limited in scope,” Dusek says.

Dusek’s model has blown older models completely out of the water —something he never expected when he began the project 15 years ago.

In 2006, Dusek learned that Outer Banks lifeguards keep detailed records of rip current rescues, producing useful data spanning years. If he could gather and expand upon that, he thought, he might have enough information to predict these hazards in North Carolina.

He spent two summers gathering data from 18 lifeguards — recorded twice a day along a 5-mile stretch of beach — combined with bi-weekly wave, beach, and nearshore measurements facilitated by the U.S. Army Corps of Engineers and the Coastal Studies Institute.

“Because we knew what was going on in the ocean, we could predict the likelihood of hazardous rip currents with more specificity, from zero to 100 percent,” Dusek says. “At the time, it was one of the most complete data records in terms of visual observations of rips. That gave us a unique perspective to better understand when and why they occur.” 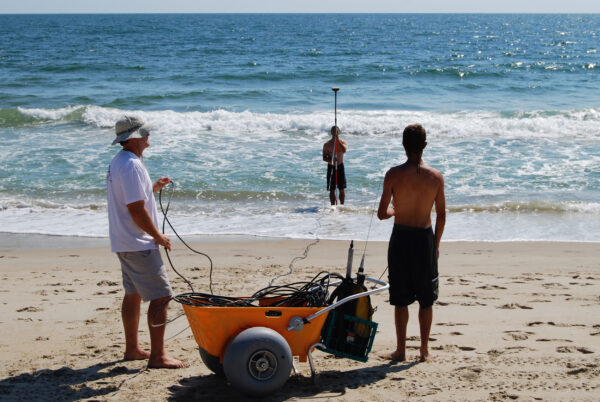 Dusek, then a graduate student, and his colleagues use a GPS system to measure the elevation of the beach and nearshore bottom. Dusek conducted bi-weekly field visits in the summer of 2008 and 2009 to collect the observations (photo courtesy of Greg Dusek).

Dusek wasn’t just interested when rip currents happened, though. He wanted to know when rescues were occurring and the conditions that make rip currents dangerous to people.

“We started to predict hazardous rips at much lower wave heights than expected. Like around 2 or 3 feet, which isn’t that big of a wave,” he says. “You start to see a really sharp increase in rescues at that point.”

Generally speaking, the larger the waves the stronger the rip current. Bigger waves mean more energy crashing onto shore and therefore more energy going back out to sea.

But on days with 5-or 6-foot waves, there weren’t many swimmers — the water looked too treacherous. In comparison, 2- or 3-foot waves were much more unassuming, so swimmers let their guard down and more rescues were needed.

Situations like that reinforced the need for a predictive rip current system, and Dusek’s dissertation was just the start of what was to come.

After receiving his PhD in marine sciences from UNC, Dusek began working at the National Ocean Service office at NOAA. His research continued to focus on different types of currents and predictive methods, so it wasn’t long before he revisited his dissertation.

Rip current prediction largely lies within the National Weather Service, whose specialty is hazardous weather forecasting. Dusek talked to his colleagues there and they were on board. There was one problem, though.

“When I first started at NOAA, we didn’t have the capability to provide the wave and water level information along the coastline to be able to use in conjunction with the rip current model,” he says. “We didn’t have the data to effectively apply it forward in time.”

In other words, their predictive model couldn’t predict.

It took the team about five years from Dusek’s initial pitch to develop a computer model capable of producing wave and water level data. By coupling that with the rip current model, they created the Nearshore Wave Prediction System. 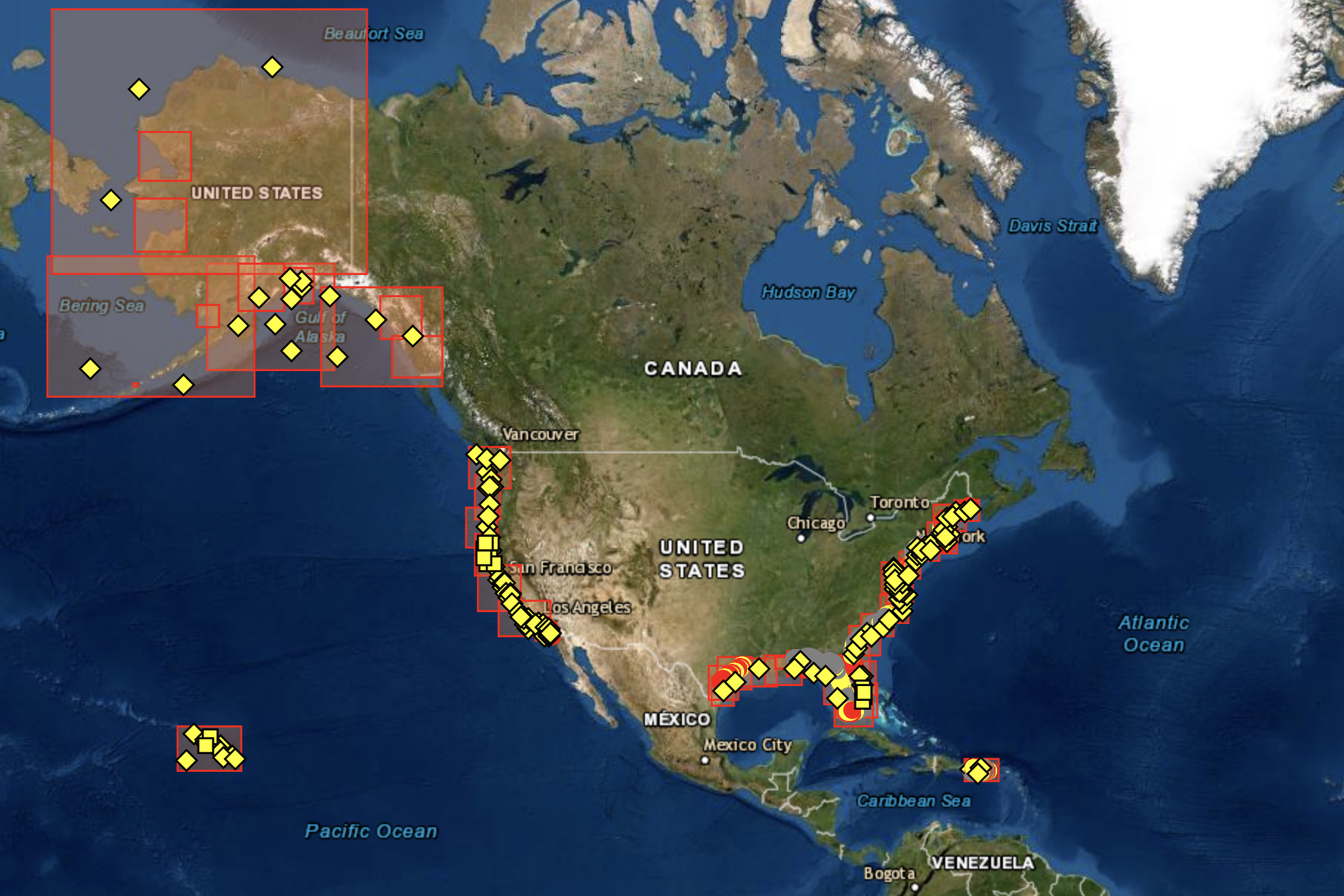 The Nearshore Wave Prediction System provides rip current predictions every hour for every kilometer along the U.S. coastline (image by NOAA).

Dusek wasn’t done, though. The system was great at predicting rips in North Carolina, but why stop there? How would it hold up in other areas of the country?

To test this, he began working with lifeguards again, but this time in different locations throughout the country — in places like Florida, California, and Massachusetts — comparing results from the model and lifeguard observations. Since then, they have made comparisons in ten regions, nationally. Good news — there was agreement between the model created in North Carolina and most of the locations they tested.

“Greg works in a section of NOAA that typically does not bear responsibility for these kinds of models or forecast systems,” he says. “So it’s really impressive that he’s managed to find a way within NOAA to promote this and stay involved, reaching across different divisions of a mighty large organization.”

Reflecting on the past 15 years, Dusek gives credit to the people involved in the prediction system’s development — it wouldn’t have been possible without the contributions and guidance from a wide array of people.

“I think there was over 70 people that have been involved in this one way or another at UNC, the Army Corps, USGS, all the weather service folks,” he says. “It really spans a broad spectrum of people that have contributed to it.”

Throughout Dusek’s education and subsequent career, he’s realized the importance of collaboration — whether that be enlisting the aid of Seim to help develop and support research proposals for NOAA; working with a former fellow PhD student, Mike Muglia, to study currents at the Coastal Studies Institute; or collaborating with Rick Luettich at UNC’s Institute of Marine Sciences to better understand long-term sea level trends.

“The coastal oceanography community is pretty small,” he says. “So maintaining those connections after you leave school is super helpful because there’s always going to be opportunities to work together.”

Dusek values those relationships not only for the opportunities they provide for projects, but to have someone to talk to on a professional level.

“Being able to reach out to someone that you trust and get their thoughts both from a professional and scientific standpoint is just so invaluable.”

If previous trends are any indicator, Dusek’s model won’t be last big endeavor to come out of those connections.

Greg Dusek is a senior scientist at the National Oceanic and Atmospheric Administration. He received his PhD from UNC in 2011 in the Department of Marine Sciences within the UNC College of Arts & Sciences.

Harvey Seim is a professor and department chair in the Department of Marine Sciences within the UNC College of Arts &  Sciences.