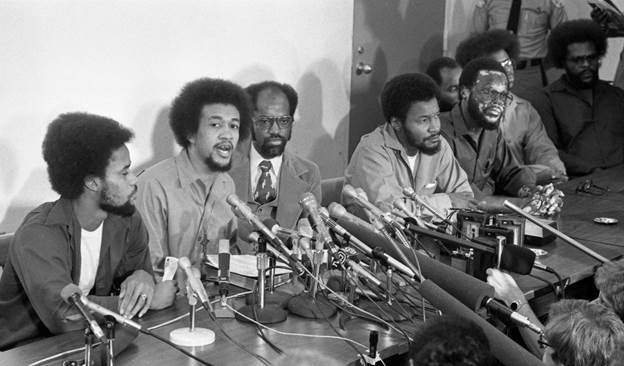 photo courtesy of Kenneth Janken
The Wilmington Ten held a press conference at Central Prison in Raleigh to denounce Governor Jim Hunt's decision not to pardon them.
By Alyssa LaFaro
Society

Shards of glass explode into a fiery rainstorm as a Molotov cocktail crashes through a window of Mike’s Grocery in downtown Wilmington. Firefighters arrive to put out the blaze, but are shot by a group of vigilante gunmen on a nearby rooftop. The building survives the flames that Friday evening — only to be firebombed again the next night. This time, the building collapses. Two deaths, six injuries, and more than $500,000 in damage resulted from the chaos.

This dramatic scene unfolded in the early morning hours on February 6, 1971, during the height of school desegregation disputes in Wilmington. Who was responsible for the arson was unclear, but the people who ultimately took the blame included nine African-American men and one white woman, most of whom were teenagers. As the prosecution of these young people unfolded, they became known as the “Wilmington Ten,” and their controversial case received national press attention. After nearly a decade of hard-fought legal battles — four of which were spent in prison — their convictions were ultimately overturned by the U.S. Court of Appeals for the Fourth Circuit in 1980. 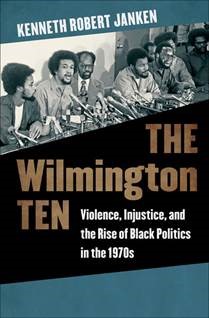 UNC historian Kenneth Janken gives a thorough account of these events in his new book, “The Wilmington Ten: Violence, Injustice, and the Rise of Black Politics in the 1970s.”

Much has been written about the Wilmington Ten over the four decades since the events took place, but Janken is the first to give the full story. He provides the context and comprehensive narrative that is critical to understanding how and why this group of young people was prosecuted for the crimes they did not commit.

The road to Wilmington

In 1954 — through the Brown v. Board of Education of Topeka case — the Supreme Court declared segregated schools unconstitutional, overturning the famous Plessy v. Ferguson decision of 1896. But what seemed like a win for the black community, actually created a starker divide.

“Although the Brown Decision was handed down in 1954, most places were very slow to implement it,” Janken explains. Just two years later, 19 senators and 82 representatives — most of which from formerly confederate Southern states — signed the Southern Manifesto, which declared the Brown Decision an abuse of judicial power. Instead of desegregating the schools, some states like Virginia shut down entire school systems and used the leftover money to supplement white academies. Meanwhile, black students either missed a few years of school or traveled to a part of the state where schools hadn’t shut down and lived with strangers or relatives willing to take them in.

North Carolina took a different approach, according to Janken. The state agreed to adhere to the Brown Decision, but avoided taking any action. By 1970, little progress had been made toward desegregating schools. An array of protests, strikes, and lawsuits eventually led to some change. The city of Wilmington responded by shutting down black schools and moving those students to two previously all-white high schools.

For African-American students, “a bump in a crowded hallway might very well be followed by racist taunts and then [fistfights],” writes Janken. They were also sidelined from active participation in sports and clubs, and punished for speaking their minds. Things weren’t much better for black educators, who were shunned by white teachers and deprived opportunities for professional advancement.

Displaced students formed a committee to boycott the unfair treatment, though they struggled to find a home base for their cause. A white minister named Eugene Templeton showed sympathy toward their plight and let them use Gregory Congregational Church, a predominantly black church in downtown Wilmington — just short of two blocks from Mike’s Grocery — as their headquarters.

The unfair treatment and eruptions of conflict occurred nationwide — but a lack of strong leadership caused many of these protests to fold. This was not the case in Wilmington, where a handful of political organizations including the Commission for Racial Justice, the Southern Christian Leadership Conference, and the Youth Organization for Black Unity had a presence. The latter produced a national newspaper called The African World, which linked black struggles in Africa, the colonized world in Latin America, and the United States. 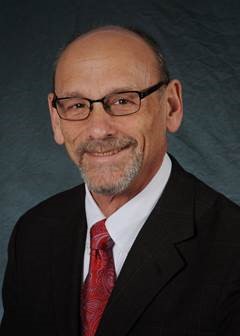 Kenneth Janken is a professor of African, African American, and diaspora studies at UNC, as well as director of the UNC Center for the Study of the American South.

“These organizations and that newspaper had a big influence on the Wilmington high school students who were boycotting,” Janken says. “It gave them perspective. It fortified them. It offered them theories for why they were oppressed and how to change. And I think that’s the difference between Wilmington and the rest of the country.”

Their affiliation with Gregory Congregational, part of the United Church of Christ (UCC) denomination, also worked in their favor. When Templeton realized he didn’t have the resources or skills to fully assist the boycotting students, he reached out to the UCC for help. In response, they sent Ben Chavis — an organizer for UCC’s social justice wing, the Commission of Racial Justice — to aid their cause.

“At the time, Chavis was one of the most recognized, talented political organizers in the state of North Carolina,” Janken explains. He was involved in the Civil Rights, Black Power, and anti-Vietnam War movements. “He bridged movements and made a difference in the ability for African Americans to be heard.”

Templeton’s “freedom school” officially began on January 29, 1971. By day three, the number of boycotters participating in the school had increased from about 30 to more than 100. After Chavis helped them sharpen their demands, the organizers met with a board of education advisory committee to make a handful of requests including a black studies curriculum, more speakers relevant to the African-American experience, the hiring of more black teachers, and an end to the violence and discrimination against black students.

The superintendent was quick to rebuff their appeals.

The community mobilized quickly. In early February, while student protestors quietly continued to hold their ground at Gregory Congregational, a fight between black and white spectators at a high school basketball game resulted in the arrest of only the African-American participants. Police became the targets of rocks and bottles. Armed white vigilantes from the Rights of White People organization conducted drive-by shootings at Gregory Congregational, and black “brothers of the street” and servicemen from Camp Lejeune responded.

The chaos of the next four days would leave a permanent mark on Wilmington’s history.

The collapse of the system

By February 7, five white-owned mom-and-pop shops were firebombed, as was the New Hanover High School field house and a few offices of the Wilmington Housing Authority. Mike’s Grocery was the only location in which the attempt was made three times over the course of three nights.

The brothers and soldiers who became involved with the students’ plight operated independently from their boycott. “They were likely the ones who extended the violence beyond the church perimeter and attacked white targets,” according to Janken. But it was the peacefully protesting students — and Ben Chavis — inside Gregory Congregational who would be charged for the crimes. “The danger Chavis posed to the Jim Crow order in North Carolina was such that the authorities really wanted to get rid of him,” Janken says. “I think, at some level, the arrest of the Wilmington Ten was a way to get at Chavis.”

In March 1972, police arrested 10 of the student boycotters including Chavis. They spent the next four years wrapped up in legal proceedings. The prosecutor, District Attorney Jay Stroud, did everything in his power to prevent the 10 from walking free — from bribing a false witness to feigning sick because nine of the 12 jurors selected were African American. The judge granted a mistrial for the latter, and the final jury selection comprised 10 whites and two blacks.

The skewed jury selection led to a disappointing loss for the 10, who were sent to prison in February 1976, after the first round of appeals were exhausted. They remained imprisoned until the final member (Chavis) was released in December 1979. During that time, protests formed not only across the country but the world, as people gathered together to stand up against the unfair trial given to those involved. The same year as their imprisonment, Amnesty International took up the case. Media outlets like Time, Newsweek, New York Times Magazine, and “60 Minutes” provided coverage of the event. Even the Soviet Union got involved, responding to President Jimmy Carter’s disapproval of political prisoners by citing the Wilmington Ten as an example of American political imprisonment.

“This was a moment in time when left-wing forces were able to lead a united front,” Janken says. “They led it locally and statewide, nationally and internationally. And they were able to show the connections between what was occurring to the Wilmington Ten with what was occurring with educational inequality, police brutality, and judicial railroading in other parts of the world.  They were able to demonstrate the connections between the oppression that African Americans endured and fought against and the struggles Africans waged against apartheid and colonialism in southern Africa.”

Does history repeat itself?

Some of the accounts of the Wilmington Ten sound eerily similar to what’s happening in today’s world of police riots and street protests. But the political atmosphere is not identical, Janken stresses. Nevertheless, the story of the Ten remains entrenched in history, and accounts like those from Janken inspire future social movements. The recent achievements of the more than 20,000 peaceful water protectors at Standing Rock, North Dakota, for example, is a testament to the sit-ins and protests of yesteryear and the power of the masses. It was “a scene as explosive as the Freedom Rides or the bus boycotts play[ing] out in real time on the high plains of the Dakotas,” wrote The Guardian’s Bill McKibben.

“The major organizations that constituted the Free the Wilmington Ten movement did not treat the ills they faced singly or as isolated issues,” Janken points out. “Rather, they began from specific examples of oppression and generated powerful critiques and indictments of the country’s social, economic, and political system and offered radical systemic solutions. Their leftism was openly displayed, and their power, which they derived by their dogged organizing and work of political education, compelled all sorts of moderates and centrists to join their ranks. My hope is that readers will think about this as they are reading and long after they have finished.”

Kenneth Janken is a professor in the Department of African, African American, and Diaspora Studies within the UNC College of Arts & Sciences. He is also the director of the UNC Center for the Study of the American South.