Charles Darwin may be best known for his theory of survival of the fittest — the most adaptable organisms are the most likely to survive and thrive. Less well known but perhaps just as important is his view on human relationships. “A man’s friendships are one of the best measures of his worth,” he once said. UNC psychologist Sara Algoe, who studies gratitude and its effect on our relationships, couldn’t agree more. 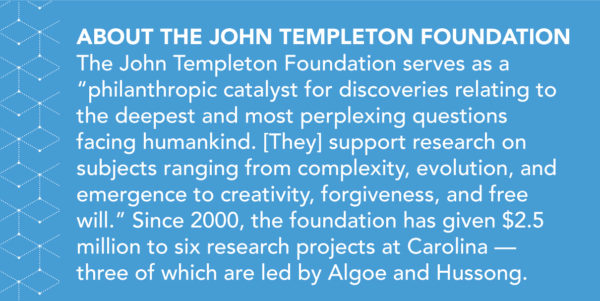 “Gratitude may actually alert us to people in our environment who are looking out for our best interests,” she points out. “And that’s really central to survival, to the human species. We need to be able to find people who have our backs.”

But how do we learn gratitude skills? That’s what UNC clinical psychologist Andrea Hussong hopes to uncover. She has spent the past three years focused on Raising Grateful Children, a project of the Center for Developmental Science, an inter-institutional organization hosted at UNC that Hussong directs. Initiated by a 2012 push for gratitude research by the John Templeton Foundation, the study strives to understand parents’ gratitude goals and then help them cultivate those values in their children.

“Gratitude is how you make sense of what you’ve been given — your feelings and thoughts about those gifts,” Hussong says. “And then how you act on that to show appreciation.”

How can we measure gratitude? Through conversation. And lots of it. Hussong and her team — which includes psychologists from UNC, Duke, and NC State — held focus groups and then lab visits with 100 middle-class families that include children ages 6 to 9. “We wanted to go as young as we thought we could go to see it start unfolding,” Hussong says. “We didn’t want to simply study manners or appreciation — we wanted to study the whole experience of gratitude.”

Kids as young as 6 recognize the difference between simply saying “thank you” and genuine gratitude, according to Hussong. “Many of the children we talked to had a lovely phrase for telling the difference between the two,” she chuckles. “They’d say: ‘She said thank you, but she didn’t mean it.’ So even at that age they are getting it — but they lack the perspective, the experience of it.”

To better understand how parents teach this, Hussong and her team utilized these focus groups to create a longitudinal study. Since 2012, they have gathered data on these families and their children (now ages 9-12) via lab visits a few times each year, and plan to continue the project into 2018. Through their observations, they found that parents teach gratitude to their children in different ways.

The first is modeling — watching parents express gratitude toward others. When mom thanks dad for cooking a delicious meal while the whole family eats together at the dinner table, the children take note.

“Every time you interact with your kid, you enact something,” Hussong explains. “Whether you choose to or not, you do. And so you have a set of values that you’re demonstrating constantly. We anticipate that parental modeling is going to drive gratitude.”

But it’s more than just modeling. Current data shows that parents who talk to their kids about gratitude on a daily basis often have kids who are more grateful. “We think a lot of gratitude lessons are learned in daily conversations, rather than big, sit-down, let’s-instill-a-virtue discussions,” Hussong says.

What about when children are ungrateful? How parents respond to that is crucial, too. “Our initial findings suggest that negative reinforcement toward a child’s entitlement may actually promote gratitude,” Hussong explains. Positive reinforcement, on the other hand, could lead to more feelings of privilege down the road. But there may be other unintended consequences associated with both responses, Hussong points out.

Physical environments shape this human emotion as well. Sometimes parents choose activities for their children based around fostering gratitude — such as volunteering with them at a homeless shelter or encouraging them to hang out with respectful friends. This process is called niche selection. “We make choices about who our children connect with and what they do,” Hussong says.

Most recently, Hussong and her team received another Templeton grant to translate their findings into programs for parents. They’ve developed an online, web-based training platform for parents still participating in the study to learn communication skills with their now 9- to 12-year-olds.

“These kids, who are coming out of the same sample we’ve been following, are starting to reach the tween years — when parent/child communication shifts,” Hussong says. “And it’s often a hard time for parents, moving into that give-and-take period.”

In partnership with Story Mine Media, a Durham-based documentary film group, the researchers created short videos to model these conversations from both adult and child perspectives — an idea originating from Hussong’s previous work with a training program for parents whose children misbehave.

“But the goal here is not to change child behavior,” Hussong stresses. “The goal is to understand each other. We do that by helping parents learn how to listen to their kids, how to help kids share with their parents, and then how parents can appropriately share back with their children.”

Gratitude continues to become more and more important as we age and develop relationships in all aspects of life. Most recently, Algoe — who has researched gratitude since 1999 — and her team gathered data from more than 400 people in romantic relationships (funded through the same 2012 Templeton Foundation push for gratitude research mentioned earlier). They found that couples who express gratitude on a day-to-day basis have stronger relationships and feel more satisfied with their lives.

“Gratitude is a booster shot for relationships and health,” she explains. “No matter which way we look at it, on days people said thanks or received thanks they felt better about their relationship than they did the day before.”

In another study, Algoe delved into the gratitude expression itself. What is it about that expression that’s most impactful?  “Putting the ‘you’ in ‘thank you’ is the thing,” she says. Imagine a brother gifts his sister a sweater, and she responds by exclaiming how great the sweater itself is. The brother is glad she likes it, but what really hits home is when she points out his thoughtfulness.

“If you express gratitude to me by calling out how great the thing I did is — praising my actions — then it adds value to the relationship,” Algoe explains. “So talking about how great the sweater is isn’t enough. It’s saying, ‘You went out of your way to get this and you remembered my favorite color,’ that makes the difference.”

Gratitude may be more than something we get from our parents. Some researchers believe there’s a greater biological mechanism at play.  “In the 1990s, these experiments with prairie voles really got peoples’ minds engaged in the possibility that oxytocin facilitates social life in all these ways,” says Algoe. Researchers found that females with high levels of oxytocin were more likely to engage in long-term relationships with one male partner.

Intrigued, Algoe couldn’t pass up the opportunity to test whether oxytocin facilitates bonding via gratitude in humans. In a recent study, she and her team found that 129 romantically-involved adults with naturally elevated levels of oxytocin had better perceptions of their partner when he/she expressed gratitude toward them.

“It’s like rose-colored glasses for bonding,” Algoe says. “And it helps forecast the future of the relationship. It adds to the feeling you have when you walk away from the conversation.”  She hopes to use the study as a basis for further exploration into the effects of oxytocin on intimate partnerships.

While family and romantic relationships are vital, most of us spend the majority of our days at work, which led Algoe to wonder about gratitude in those environments. “You know the person at the office who gets frustrated too quickly and then the person who cracks jokes — you change your behavior toward those people,” Algoe says. “Well, we’re thinking about the person who expresses gratitude.”

Through another Templeton grant (called “Gratitude and Societal Good”), Algoe and her team will test the effects of being in an environment where people regularly express gratitude and whether or not that boosts multiple relationships at once within a given social network. “We have some exciting new data showing that my gratitude to you actually changes the behavior of somebody who sees me thank you,” she says. “So that suggests that one person can start a ripple effect.”

Meanwhile, at the Center for Developmental Science, Hussong ponders how gratitude differs among cultures. “For our online program, we interviewed a Korean-American mom, who talked about the way gratitude gestures are built into daily life in Korea — and are so different from what she’s experienced in the states. I’m really curious about these things.”

Although Hussong has no immediate plans to delve into a cultural study, one of Algoe’s graduate students has already begun tackling the topic. For his dissertation, Yen-Ping Chang is collecting data from Taiwanese and American study participants to test hypotheses about cultural variety in the ways people demonstrate their gratitude.

Thanks, in part, to Templeton, this is the nature of gratitude research, lately — if you’re not researching it, someone else probably is. That’s why Algoe, Hussong and Christopher Oveis from the UCSD Rady School of Management have teamed to host a gratitude conference at UNC in January: to bring together academics focused on the topic from across the United States.

“There are all these different people studying gratitude from all these different angles,” Algoe points out. “Some study it as a disposition or personality trait. Others are interested in how it works for intervention. Our goal is to get them in the same room to exchange ideas and get a network going. And we’re really excited about the possibilities.”

Sara Algoe is an associate professor of social psychology in the Department of Psychology and Neuroscience within the UNC College of Arts & Sciences.

Andrea Hussong is the director of the Center for Developmental Science and a professor in the Department of Psychology and Neuroscience within the UNC College of Arts & Sciences.

Yen-Ping Chang is a graduate student in the Social Psychology Graduate Program within the UNC Department of Psychology and Neuroscience.