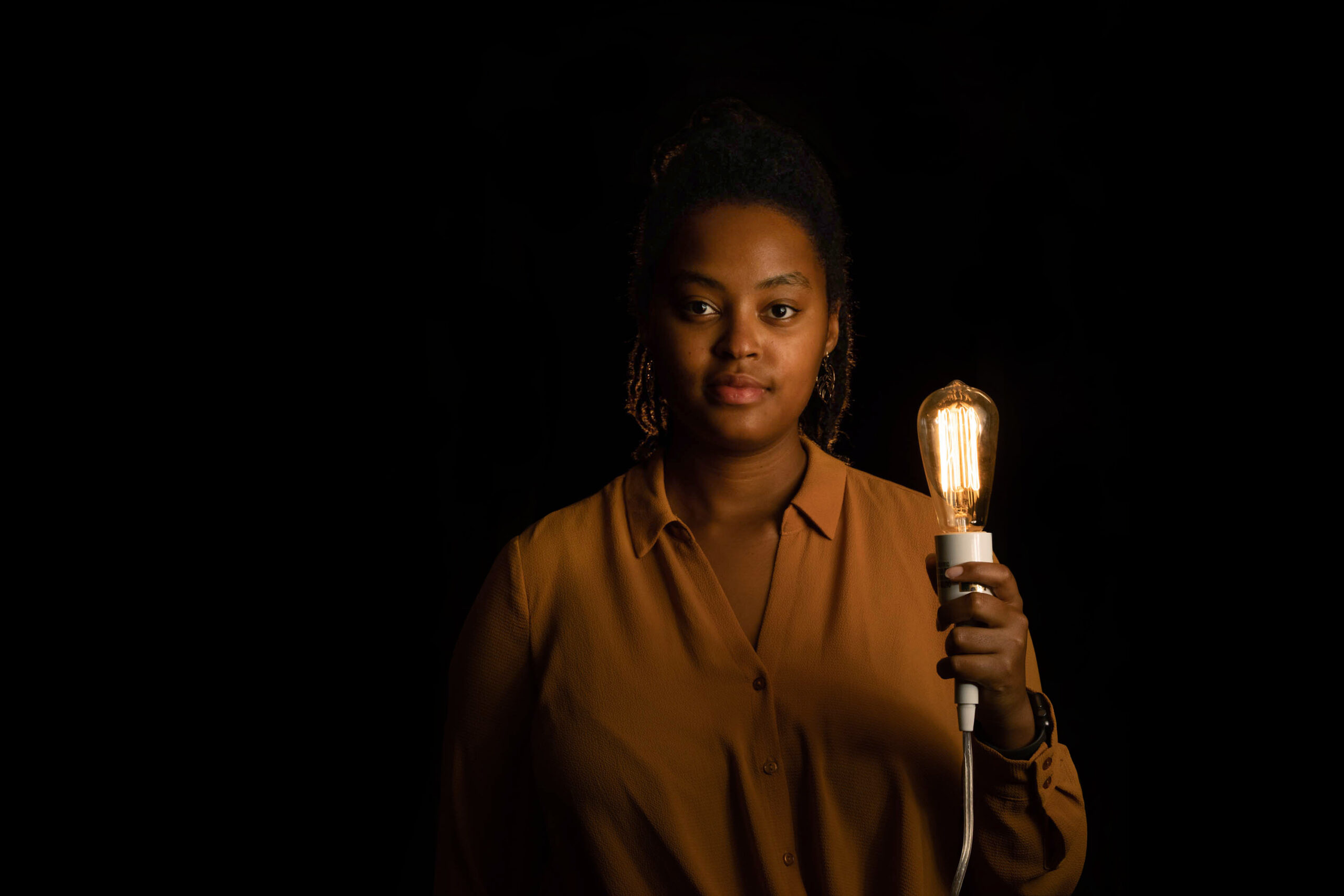 In the darkness, students are the light ahead: Lenore Hango, UNC '20, is just one of the contributing students who worked diligently to research and craft a new foundational textbook in global health and human rights by Benjamin Mason Meier and Lawrence O. Gostin. (photo by Elise Mahon)
By Elise Mahon
Health | Society

Benjamin Mason Meier, associate professor of global health policy at UNC, realized that students interested in the intersection of public health and human rights had access to numerous articles across various journals, but no textbook to introduce them to the rapidly growing field. He set out to remedy this issue, teaming up with UNC undergraduate and graduate students and Lawrence O. Gostin, a Georgetown University professor, along the way.

Written by 38 expert contributors, “Foundations of Global Health & Human Rights” is a 20-chapter volume that seeks to provide a detailed understanding of the evolving relationship between global health and human rights. 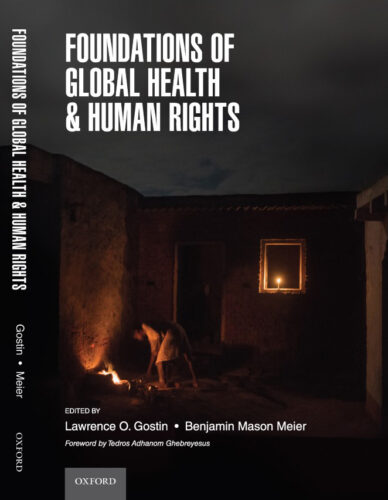 “No singular individual can write a textbook, start to finish, in such a multifaceted field,” Meier says. “We were able to bring together the scholars that we think are the world’s leading experts in their particular subfield, then made sure that the textbook can be read as a singular book, where each chapter builds upon the one before.”

Meier, who has extensive experience in the field as a consultant for the United Nations (U.N.) and World Health Organization, took the lead in writing six of the 20 chapters himself. In his early work as a human rights lawyer, Meier learned that wars weren’t killing nearly as many people as underlying health problems were — problems he believes can be solved with a rights-based approach to health policy.

“People who make policies that impact health need to understand what it means to say, ‘Health is a human right.’ That is the fundamental gap that this textbook aims to fill,” Meier says.

While the term “human rights” wasn’t coined until after World War II, the idea had certainly been around for hundreds of years. Focusing on human rights as they are defined in written policies and historical documents like the Magna Carta allowed Meier and his team to begin crafting their historical framework — contextual research completed by Meier’s diverse team of UNC undergraduate and graduate students.

“The original symbol of human rights was a flame, this idea that, in the darkness, there is this flicker of hope,” Meier says. “You see that symbolism in the cover image we chose for this textbook. Our dedication in the book is, ‘To our students: In the darkness, you are the light ahead.’ In this moment of darkness, students can help provide the light to guide us out.”

By students, for students

Lenore Hango is one of those students. A 2020 graduate of UNC, Hango was just a sophomore when she first contributed to the textbook.

“The fact that this textbook is the first of its kind, and it was created intentionally to be accessible for any professor or teacher, will be key to its success as a stepping stone to the next generation of health and human rights teachers and learners,” Hango says.

Researching and compiling articles across numerous publications, translating that information into text that would contextualize the contributions of the expert scholars involved, and editing all 20 chapters of the book to create a single coherent narrative voice was a lengthy but necessary process to make it easier for students to enter the field.

Hango herself stumbled upon the field by accident, when she decided to take Meier’s human rights class simply because she thought it might be interesting. 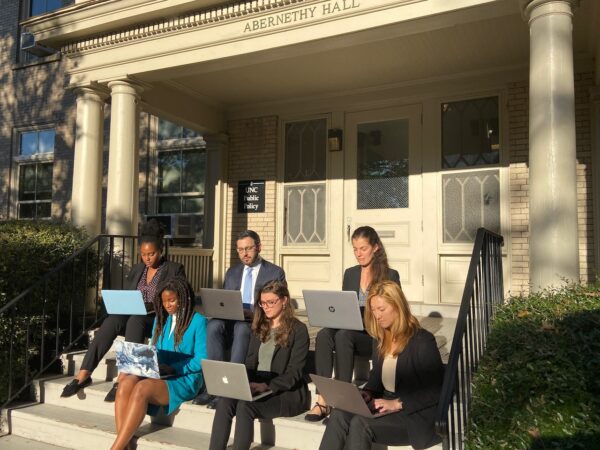 “I didn’t realize who he was or what his qualifications were or anything,” Hango says. “It turned out to be one of the best classes I took at UNC because it was so eye-opening. It really solidified my interest in public health.”

After lectures, Hango would attend office hours to continue discussions of the day’s topics with Meier. By the end of the semester, Meier recognized her passion for the material and offered her a spot on the textbook research project. Two-and-a-half years later, the 22-year-old is credited in a published textbook that will build a foundation for human rights and public health education for years to come.

“Textbooks are not for immediate change, but for long-term transformation,” Hango says. “There are plenty of schools and colleges out there who don’t have a Professor Meier creating a class and curriculum around health and human rights. The development of a textbook makes it that much easier to build a learning experience for students.”

One of Meier’s biggest concerns is that “health is a human right” has simply become a phrase people hear and say, but don’t necessarily understand what it means, especially as it relates to policies. That’s where the case studies come in.

A case study in water

The right to water sanitation and hygiene, or WaSH, wasn’t formally declared until 2010 by the U.N. Chapter 12 of the book focuses on access to WaSH — a topic that both Hango and Meier see as an example of how these rights can impact daily health and well-being.

“Water is taken for granted. If we have access to it, we don’t even think about it,” Hango says. “But water disrupts daily life if it’s not available and of good quality.”

People in other countries aren’t the only ones with barriers to clean water access. The people of Flint, Michigan, are still living with the negative health impacts from lead that began leaching into their water system in 2014.

Meier, who took the lead on this chapter, also discussed water as it applies to menstrual hygiene management. While this could typically be categorized as a women’s rights issue, it is framed by the U.N. as a right to water and sanitation.  Menstrual hygiene management is central to individual dignity — and is an age-old concern, Meier points out. So how do you create a public health policy to address it?

This is just one of the many case studies included in the book that will help shape students’ understanding of how a rights-based approach can help solve public health issues.

Even with so many knowledgeable and experienced contributors providing real-life examples, Meier and Hango say there are still components of human rights that the American public doesn’t recognize as being intertwined with public health. Whether from a resistance to new ideas, a lack of historical knowledge, or political actors and financial constraints, Hango believes these barriers will inhibit public health practitioners and the field as a whole from improving.

“Public health is neglected and deemed unimportant until there’s a crisis — like the one that we’re in now,” says Hango. She believes that if policymakers had been prepared and already invested in public health, the pandemic might not be this severe.

COVID-19 has been the source of political controversy surrounding the importance of human rights in public policy to mitigate the threat of disease. Just after receiving their final page proofs of the textbook in March, the virus came knocking on UNC’s door.

“Developing a textbook that didn’t address the most cataclysmic thing to happen in global health in the last century didn’t make sense,” Meier says. “We needed to make sure that we were preparing students not just for this moment and this pandemic, but for the reality that will continue to be with us for some time. They need to understand the human rights norms and principles that will be crucial to building a healthier world for the generations to come.”

Other recent issues that may not immediately stand out as being connected to human rights and health include nationalism, poverty, and climate change. Even things like trade and populism play a role.

“You might ask yourself, Trade? Why is there a chapter on trade?” Hango says. “But, as you read the chapter, you begin to realize that a multitude of different products and raw materials produced in other places are traded and can ultimately become medications.”

Meier and his team hope to illuminate these hidden impacts to create a healthier future for the world.

“Public health, in a way, is the study of everything,” Hango says. “Now, people will recognize the connection between human rights and public health earlier. The field is emerging at the same time as a new generation is pushing the boundaries of what’s possible, what they’re willing to accept, and what’s good enough. And that’s the most encouraging part for all of us. By training students in the field, we will keep pushing ahead — to create a better future.”

Lenore Hango is a 2020 UNC alumna who graduated with a B.S. in public health. She is currently working as a consulting analyst at Accenture before attending graduate school.