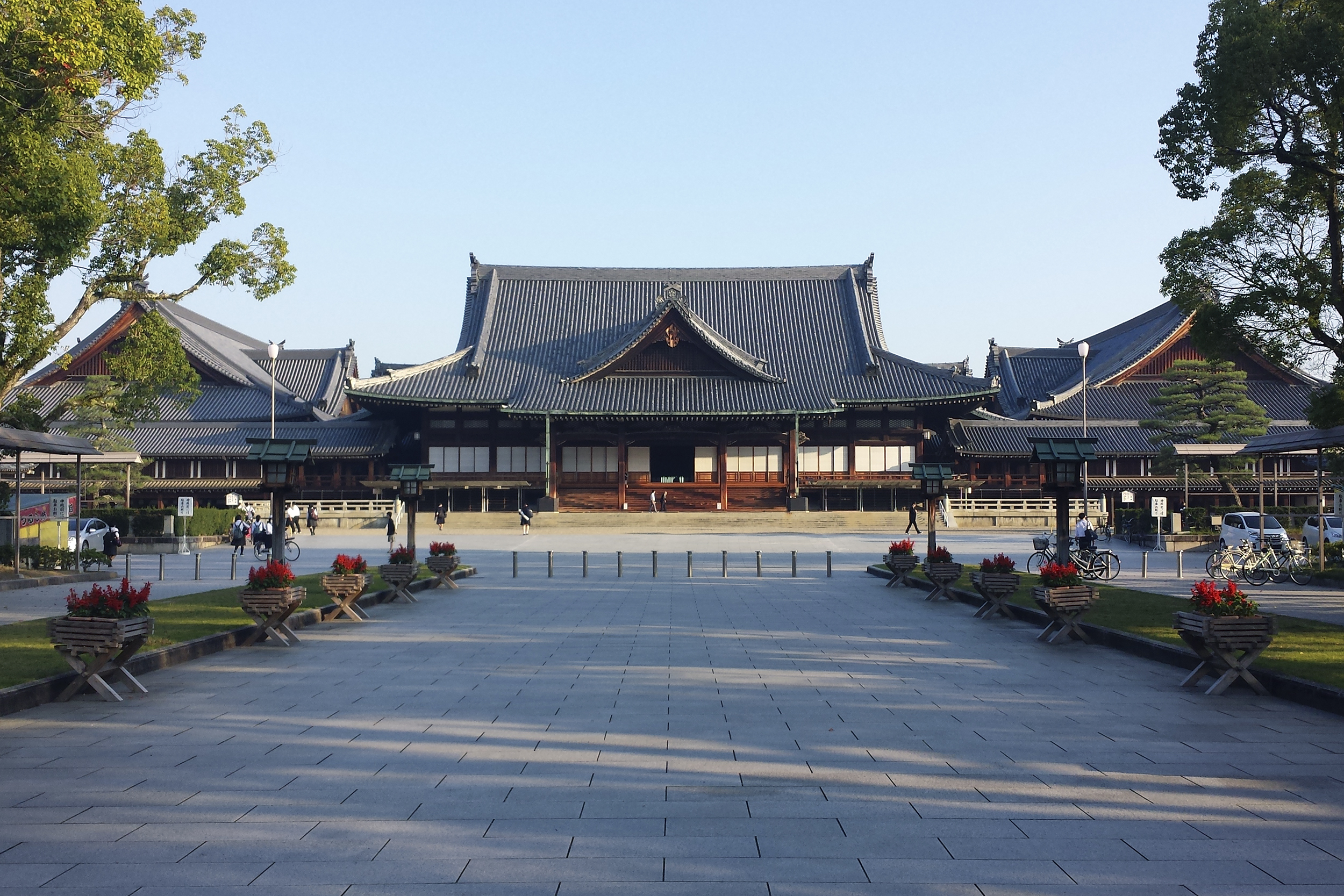 The bronze felt cold and gritty under Timothy Smith’s hand. He craned his neck back to stare at the 16-foot-high, patina-covered face. Created by Kuratsukuri no Tori in 606 A.D., the statue of the Great Buddha of Asuka-dera has survived centuries of fires and earthquakes — and is one of the oldest existing Buddha statues in Japan.

“It sort of blew my mind,” Smith says with a laugh.

At that time, in 2006, history was not a foreign concept to Smith. It was his major at Ursinus College in Pennsylvania. Plus, he grew up in Philadelphia, one of the oldest cities in the United States. As the birthplace of the Declaration of Independence, the U.S. Constitution, and the American flag, the City of Brotherly Love has a big heart for history.

But growing up with the Liberty Bell in your backyard does not necessarily make you worldly.

“Going to Japan and experiencing it — it was, wow. I could see things that were older than the world I’d known so far. I could stand in history. I could touch history.”

Philly is only 339 years old — and an entire millennium sat between its founding and the creation of the Great Buddha of Asuka-dera. Upon returning to the United States, Smith added a second major to his docket: Asian studies. He returned to Japan for his master’s degree. And again for his PhD.

That first trip to Japan changed Smith’s life. His fascination with the Asian country’s history eventually grew into a curiosity about its present. How has the past shaped today?

Smith is particularly interested in this question as it relates to religion. As a PhD student in the UNC Department of Religious Studies, he researches a “new religion” in Japan called Tenrikyo. By studying Tenrikyo’s 183-year-old history and having conversations with current practitioners, Smith hopes to understand how religions, in general, evolve across generations.

“The people here are still changing and growing and creating new ideas and beliefs,” he says. “I’m trying to get the best of both worlds by studying Japan’s mind-blowingly long religious history and the people who are still engaged with it and trying to put their own spins on it to make it more relevant today.”

Tenrikyo picked up steam as a religion in response to Japan’s cosmopolitan evolution in late 19th century, according to Smith. Its founder, Nakayama Miki, grew up in rural Japan and became frustrated with the West’s influence and the nation’s move toward modernization.

“She was a bit of a … I’m trying to think of a polite word for it. A hellraiser,” says Smith, chuckling. “And she starts a movement that’s almost in protest against urban Japan’s shift, because people in the countryside were being left behind.”

The religion officially began about two decades earlier in 1838, when Nakayama had her first revelation. During an incantation, she allegedly became possessed and entranced by a spirit called Tenri-O-no-Mikoto, which claimed to be the one true deity of the world. Her family asked the divine presence to leave, but Nakayama’s daze grew stronger, only ceasing upon their acceptance of the spirit.

Before her passing in 1887, Nakayama named the divine presence God the Parent, a just god that wants human beings to live “the Joyous Life.”

“Because they believe their god is the parent of all humanity, their god is not cruel. They believe we are born into this world to learn and to grow and to try to become better people,” Smith says.

This idea is often referred to as “a thing borrowed, a thing lent.” The concept is that our souls and our minds are our own, but the body given to us at birth is a loan. It’s a tool we use to learn more about life on this earth and how to grow as people. At death, our bodies return to God the Parent, and the spirit is reborn to continue this process of learning to be better.

To learn more about Tenrikyo’s founding, beliefs, and its current members, Smith moved to Japan in 2017 and lived there for one year. He spent most of his time at the Kojimachi Grand Church in Tokyo, where he conducted a series of interviews with members.

Japan isn’t a particularly religious country in general, Smith points out. Whenever polled, approximately 65 percent of the population claims no religious beliefs. But most people identify with Shinto or Buddhism — both hundreds of years old — at some point in their lives because families must register at shrines and temples during birth and death ceremonies. 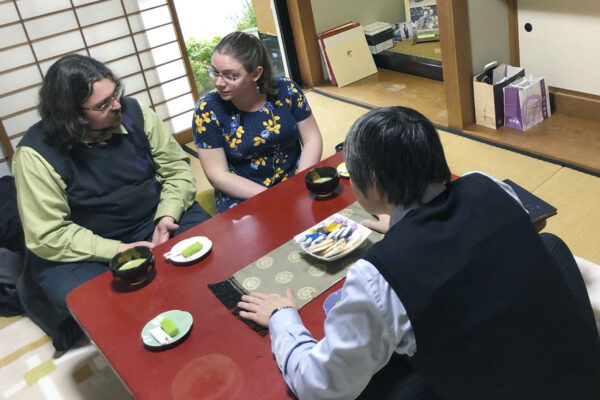 Smith and his wife conduct an interview with a Tenrikyo practitioner in Japan. (photo courtesy of Timothy Smith)

This separation from religion and the fact that Tenrikyo is a “new religion” — founded in the 19th century — can make increasing membership difficult. A slew of preconceived notions are often attached to new religions.

“The term ‘new religion’ is often considered a code word for ‘cult’ or being different or scary,” Smith says.

One example in the United States is Mormonism, which was founded in the 1820s and is often stigmatized as being associated with polygamy.

Before World War II, people felt pressure to identify as Shinto — the religion of then-Emperor Hirohito, who asserted he was a descendant of the gods. Priests who refused or failed to recognize this were often persecuted. Hirohito reigned Japan until 1989, so most mid-century practitioners tried to fly under the radar.

Then in 1995, an unrelated cult group called Aum Shinrikyo released sarin gas into the Tokyo subway — considered the worst act of domestic terrorism ever committed in Japan — and the distrust surrounding religion grew deeper.

“They’re just careful of what they say to people,” Smith says. “A lot of these are people who were born into the religion and never really traveled very far, not even domestically within Japan.”

That said, Smith learned in his interviews that the more recent generation of Tenrikyo supporters — people in their 20s and early 30s who identify as the millennial generation — are trying to expand the geographical boundaries of their religion. Many have engaged in missionary work, traveling to other cities and nations to grow membership.

Millennials from the Kojimachi Grand Church, specifically, have collaborated with nonprofits to help the people of Tokyo. They are most involved with a children’s cafeteria network, which provides no- or low-cost meals to low-income children and their families, and have even created their own community kitchen.

“In the year that I was there, I not only attended and volunteered at many of these, but I also got to see this connection that started out as very tenuous,” Smith explains. “A lot of members of this NGO were worried that if they connect with this religion, will people think they are a religious organization? Will people be hesitant to donate to their cause or connect with them? But when I was there, the members of this children’s cafeteria network were practically singing the praises of their Tenrikyo collaborators, because it was opening new connections for them.”

While this effort has made the older generation, people between the ages of 50 and 70, nervous about drawing too much attention to the Tenrikyo religion, many of them are actively participating. This is, in part, because they have more time — their children are grown and many are retired — but also because they see it as following closely with their religious beliefs.

“It’s one of the most important tenets of Tenrikyo to help your fellow man and take care of your community and society as a whole,” Smith says.

Another shift Smith has noticed is the millennial generation’s acknowledgement of and desire to address what he calls Japan’s mental health crisis. Hikikomori is the Japanese word used to describe the nation’s more than 500,000 modern-day hermits who, oftentimes, don’t leave their homes for years at a time.

Suicide rates are also incredibly high here. A recent article from CNN reports that more people in Japan died from suicide in October 2020 than from COVID-19 in all of 2020. Even before the pandemic, Japan had one of the highest suicide rates in the world — 15.8 of every 100,000 people took their lives in 2019.

“Japan has very aggressive policies about work,” Smith says. “There’s this idea of never taking time off from work, always putting in overtime, feeling constant pressure to keep up with ever-increasing numbers.” 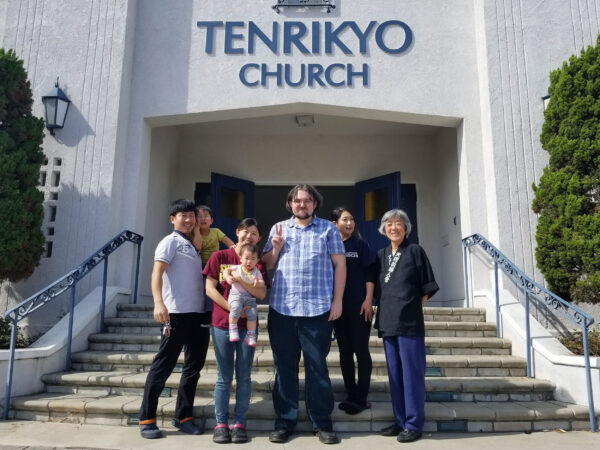 Smith (center) meets with members at the Los Angeles Tenrikyo Mission Headquarters, one of the largest Tenrikyo churches in the U.S. (photo courtesy of Timothy Smith)

Tenrikyo millennials are responding by drawing on the religion’s historical practice of spiritual healing, where the healer would ask a series of questions related to the other person’s problems. What do you think is happening? Why do you think this is happening? How does it make you feel?

“It’s a lot like modern-day talk therapy,” Smith says. “The younger generation is really starting to attach to this practice — and it’s genuinely working for people.”

While in Japan, Smith interviewed one of these people, who accepted an offer of help from the Tenrikyo church. She told Smith that she had performed poorly in school, couldn’t maintain a job, struggled with a series of mental health issues, and failed to fit in with mainstream society. She shared her story with one of the practitioners, and they offered her a place to live at the local church and helped her find work in the area.

“While she ultimately converted to Tenrikyo, there was never any pressure to do so,” Smith says. “She was told repeatedly that it didn’t matter if she joined or not — and I think this is a major difference between the older generation and the new. The older is much more focused on conversion, while the younger wants to help people first, and if they want to join, they’ll join.”

In 2019, for the first time in years, the Tenrikyo population increased in size. Not dramatically, Smith says, but by a couple thousand — a huge shift considering their numbers drop almost every year.

A tool to educate

Smith hopes to compile what he’s learned about Tenrikyo’s history and members into a book, especially since little is written about the religion in English. What does exist is information about its founding and some brief fieldwork from the 1970s. He plans to discuss how generational shifts affect religion and force it to adapt.

He also wants to use the book to talk more broadly about how religion in Japan — and globally — is trying to redefine itself to fit changing trends and social needs. Here he will include information on how urbanization and work culture have led to increased stress levels and an inclination toward alienation from family, friends, and the other social networks we have historically relied upon to stay connected. And how religious groups, like the practitioners of Tenrikyo, are working to reestablish those networks and help people.

“It seems like there’s this push to distance themselves from what they see as the problems with religion and keep what they consider the benefits,” Smith says. “Tenrikyo members want to build community and find meaning. And because that’s important to them, I want to share it.”

Timothy Smith is a PhD student in the Department of Religious Studies within the UNC College of Arts & Sciences.