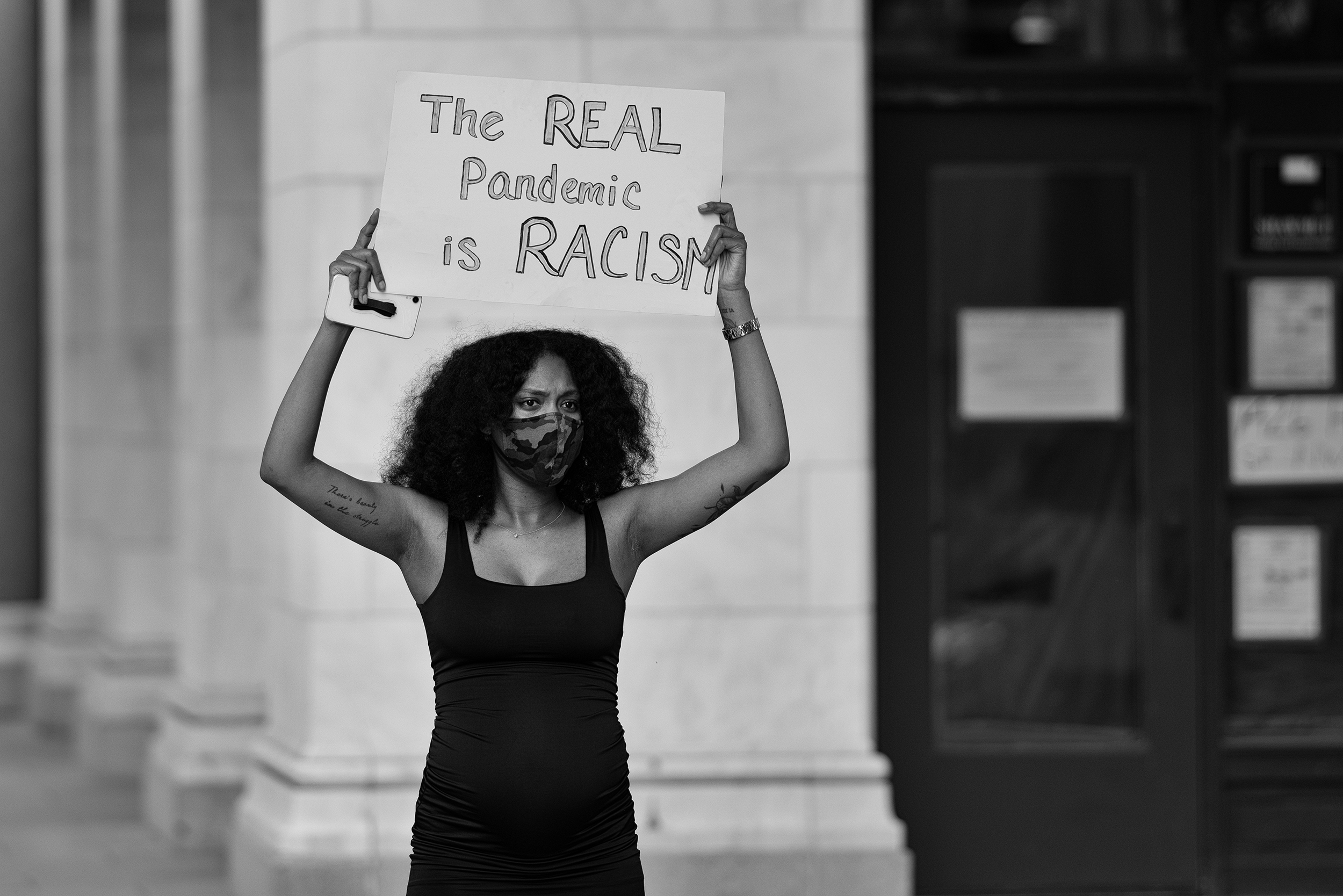 A woman participates in a Black Lives Matter protest in Washington, D.C. on May 31, 2020. (photo by Miki Jourdan, https://flic.kr/p/2j7cGL1)
By Alyssa LaFaro
Society

When Julian Rucker was 20 years old and pursuing a bachelor’s degree in psychology at the University of Texas at Austin, he began working at a state psychiatric hospital. He thought he wanted to become a mental health clinician, and while the time he spent at this facility gave him valuable insight into that goal, it also opened his eyes to a slew of systemic problems.

He remembers one case in particular: When a man undergoing a drug-induced psychotic episode was brought in against his will by the local police. That’s the law in Texas — when a person poses immediate danger to themself or others, specially trained mental health deputies or officers can detain them without a warrant and take them to a psychiatric facility for further evaluation.

“He was a large Black man, roughly my size,” Rucker says. “And he was furious. Just spittin’ and cursin’ and fighting folks. He was restrained and medically sedated — and wasn’t sure what was going on. The next day, he was as nice as can be, but I understand how horrible that experience must have been for him — and having this be his interaction with both the police and with mental health care says something about the system.”

This is a common occurrence, Rucker points out — one that you typically only see if you work in these facilities. Otherwise, they’re easy to ignore. But Rucker watched this happen to multiple people and, oftentimes, the same people, who would come in and out of the facility on a regular basis. Most of them were Black and Latino.

“I saw structural barriers, like poorly funded social services, bring some of the same folks back to the hospital repeatedly. That was a frustrating and radicalizing experience,” he says. “It made me want to better understand how institutions and societal structures perpetuate inequality.” 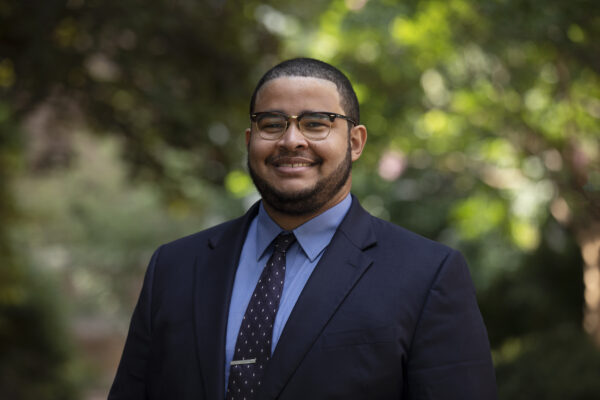 Julian Rucker (photo by Megan May)

Rucker decided to become a social psychologist instead of a clinical one and went on to earn a master’s from Northwestern University and a PhD from Yale University. Now, as a postdoctoral researcher in the UNC Department of Psychology and Neuroscience, he studies how people characterize discrimination and perceive racial economic inequality.

Rucker pursues this work through surveys with people who identify as white, Black, and Latino; analyzing national data sets on racial and political attitudes; and combining the preexisting psychology literature with his own work to formulate new ideas.

While he believes there’s no “silver bullet” to fully dismantle racism in this country, he thinks we can employ multiple solutions to improve how we’re currently addressing these issues.

“Structural racism” is a term most people will recognize at this point, but it’s not necessarily one that people are familiar with. That’s because it’s complex, Rucker says, and requires a large repertoire of historical knowledge to fully understand.

“You have to seek out this information,” Rucker says. “As someone who has gone through a lot of schooling, I’ve had the time and resources to study these things that weren’t presented to me in my regular public education. There is a path of least resistance I could have taken, and it wouldn’t have led me to understand structural discrimination. Most people are coming from different places, and I can’t assume that they know this history when they might not.”

Previous research suggests that if people lack knowledge about the history of racism, they are less likely to recognize or understand structural racism and, in some cases, deny its existence. Part of this disconnect comes from a mix-up between structural and interpersonal racism. The latter is when an individual acts upon the negative attitudes they have toward members of different racial or ethnic groups, according to Rucker.

Structural racism, on the other hand, is a system of policies, practices, laws, and cultural norms that have distinct negative impacts on members of marginalized racial groups. This type of racism doesn’t necessarily stem from an individual’s prejudiced beliefs or intentions, which makes it even more complicated to understand.

“Researchers often use the analogy that it’s like several cogs in a machine that are producing racism,” Rucker says.

One example is voter identification laws, which require citizens to show an official government-issued ID before casting their ballot during elections. More than 21 million Americans don’t have IDs, oftentimes because obtaining one is expensive — anywhere from $75 to $175 — and traveling to an ID office, especially if you live in a rural community, can be burdensome. In the Black community alone, it’s estimated that 25 percent of voters don’t have a government-issued photo ID.

“Whether lawmakers overtly intend to discriminate is not the only thing that matters,” Rucker points out. “Intention isn’t necessarily the metric you should be looking for if you’re trying to find examples of structural discrimination. More simply, the disparity in and of itself is the cue.”

Comprehension of structural racism is not the only factor that contributes to its existence, according to Rucker. Research shows that people are generally motivated to perceive society as fair and just.

In 2017, Rucker conducted a study with Yale University researchers Michael Kraus and Jennifer Richeson that compared people’s estimates of disparities between Black and white families in the United States to actual levels of inequality. They found that, on average, people drastically underestimated economic inequality — shaped, in part, from ignorance of how race impacts opportunity and overarching beliefs in societal fairness.

“The take home is that folks dramatically and consistently overestimate the progress that this country had made toward closing these stark racial economic gaps — gaps in income, wealth, educational attainment,” Rucker says. “If we’re trying to craft policies to address these topics, it is essential to have an accurate sense of how bad things are.”

Additionally, psychology literature suggests that white individuals often deny participation in structural racism to maintain a positive self-image. A similar thing happens among groups when their image is threatened — people step forward to defend it.

Both an understanding of structural racism and a desire for equality are necessary to move forward, according to Rucker.

“It requires a lot of work to dispel people’s tendency to think about discrimination in only non-structural terms. To fill in gaps, to dispel myths. That’s a huge challenge,” Rucker says. “But if you have a historical and current context for how discriminatory structures work, it becomes more apparent what perpetuates them.”

Like many researchers who study this topic, Rucker hopes his work will push policymakers to address structural racism and reduce inequality. As a postdoctoral researcher and a fellow in the Carolina Postdoctoral Program for Faculty Diversity, he has more time and support to pursue this work.

“It’s important to combat this idea that somehow structural racism is so abstract that we can’t really understand it,” Rucker says. “My grandparents’ grandparents were enslaved, which really wasn’t that long ago. If you understand where Black folks in America started and the impediments that have been put in the way since, it makes sense that there are massive wealth gaps and many other inequalities.”

Julian Rucker is a postdoctoral research associate in the Department of Psychology and Neuroscience within the UNC College of Arts & Sciences. He is also a fellow within the Carolina Postdoctoral Program for Faculty Diversity.