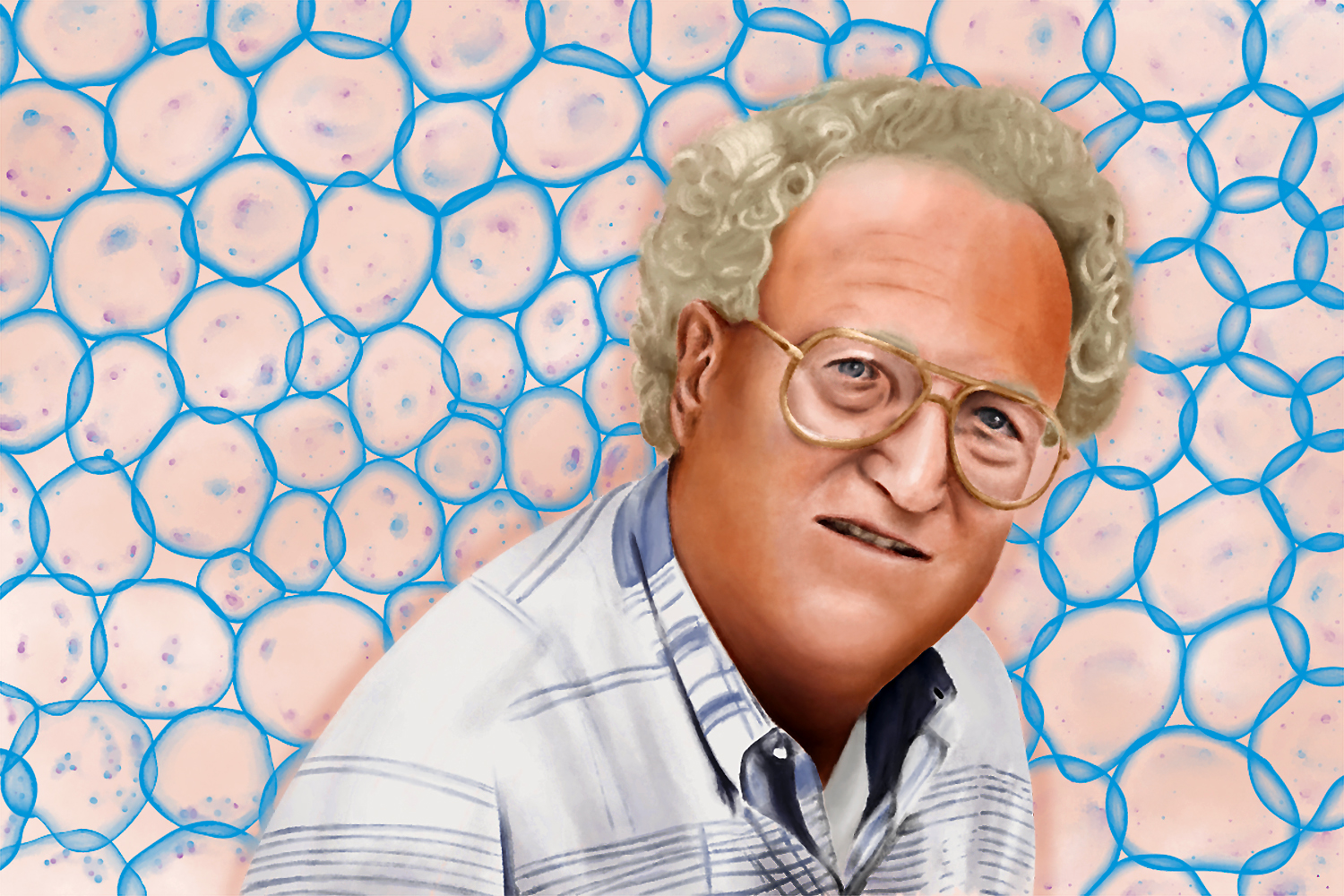 Ken Jacobson passed away on February 7, 2022. He joined the UNC Department of Cell Biology and Physiology in 1980. During his time here, he mentored numerous students and collaborated on projects with colleagues all over the world. His memorial service included multiple speakers from the academic community. (illustration by Corina Prassos)
By Alyssa LaFaro
Earth | Invention

Before you exit Eric Vitriol’s office at Augusta University, a sign on the back of his door gives the last goodbye. It shows an older gentleman with white curly hair and a quirky half-smile. The text along the image reads: “Have you been a Ken Jacobson today?”

“That means, have you treated people with dignity and respect? Have you really promoted other people’s careers?” Vitriol shares.

From 2004 to 2009, Vitriol was a graduate student in Jacobson’s lab at UNC-Chapel Hill. He reflects fondly on that time and gives much of the credit to Jacobson. 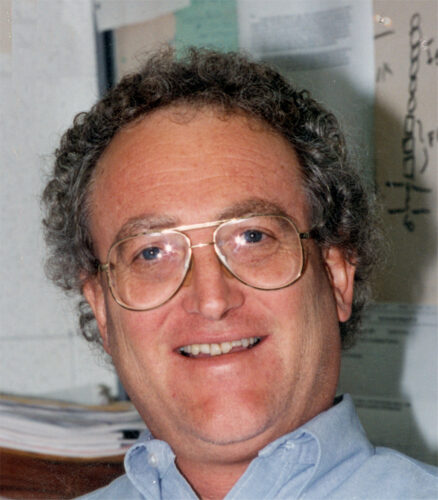 “I’ve been working in labs for a long time — and I don’t think I’ve ever seen a lab that ate lunch with their PI every single day. And then the topic du jour was always liberal politics,” Vitriol says with a laugh. “I treasure that time.”

He adds that, one year, Jacobson was asked to give an important talk at the American Society of Cell Biology Meeting. He asked Vitriol, a PhD student at the time who had done the bulk of the research on the project to be presented, to give the talk for him — a rare opportunity for a graduate student.

“That never happens,” Vitriol stresses. “Ever.”

Jacobson passed away on February 7, 2022. Vitriol was one of several scientists who spoke at his virtual memorial this past May. Each person who spoke used different words to convey the same message: Ken Jacobson was an incredibly kind, supportive, and humble person.

“He was kind in a way that I think you have to be born like that,” Vitriol says.

And he was an incredible scientist.

During his four decades within the Department of Cell Biology and Physiology at Carolina, he pioneered the use of several microscopy techniques that changed the way we study cells, deepened our understanding of how the cell membrane is organized, and published over 170 papers in leading scientific journals.

When you ask Jacobson’s closest colleagues about his biggest accomplishments, they rapid-fire a list of acronyms: FRAP, TFM, CALI, SPT — abbreviations for various microscope techniques. It’s obvious that Jacobson was a whiz at uncovering the intricacies of small objects, most notably cells.

Jacobson, who came to Carolina in 1980, created new microscopy methods and led the way in applying multiple techniques at the same time to make new discoveries in the field of cell migration.

How cells move is fundamental to understanding how the human body works, from embryo development to wound healing to fighting infection. Cancer cells, for example, migrate and invade new tissues and sites, and the more we can predict their movements, the better chance we have of developing treatments to stop the spread.

In response to the creation of the first-ever method for sequencing DNA in the 1970s, the field of molecular biology exploded in the 1980s. Most cell biologists were studying proteins — molecules encoded by DNA that are the building blocks of life.

Jacobson and his lab were interested in proteins but lipids, too, and how proteins and lipids interact with one another.

“Ken was convinced that proteins and lipids are always in concert within cells. They’re always interacting,” says Michelle Itano, a former graduate student of Jacobson’s and now director of the UNC Neuroscience Microscopy Core. “He was pushing various methods to their limits in terms of spatial and interaction capabilities and was always looking for new ways to apply them to imaging.”

Before coming to UNC-Chapel Hill, Jacobson worked with researchers at Cornell to develop a microscope technique called fluorescence recovery after photobleaching (FRAP).

FRAP uses proteins attached to light-emitting molecules to mark cell components and track their movements. After a specific area is zapped with a laser, the fluorescent light disappears. As light slowly returns to the zapped area, the rate and extent of that return can be monitored. This provides a wealth of information about cell structure.

“It gives you a window into the dynamics of these fluctuating machines,” says Klaus Hahn, a professor of pharmacology at UNC-Chapel Hill and a close collaborator of Jacobson’s. “People still use FRAP a great deal. It’s a powerful, quantitative ways to study cells.”

Jacobson and his lab observed that lipids move at the same pace as the cell they reside within — a discovery that suggested the existence of a cytoskeleton to keep cell components in place. Previously, scientists believed that a cell’s components were free-floating, meaning they moved backward as the cell propelled forward. The paper on this research, published in Science,became the foundation for groundbreaking research in the field.

Jacobson also specialized in traction-force microscopy (TFM). The technique involves placing cells on a flexible rubber substrate, which the cells would pull on and ultimately change the shape of. Jacobson realized that by inserting small beads into the rubber and measuring their movements, he could track the forces cells use to make the journey.

“I feel like Ken never got the credit he deserved for the foundational impact he had on the field,” says Keith Burridge, a professor in the department of cell biology and physiology who came to Carolina just one year after Jacobson. “Other scientists rapidly applied his discoveries to their research, and in most cases, credit was not directly attributed to him.”

Curious how deep microscopes could take him into the science, Jacobson continued experimenting with the technology as it evolved over the years. In 2019, he published a paper that proved you could follow molecules in living cells, a technique called single-particle tracking (SPT). This research is often cited as early work that led to super-resolution microscopy, an imaging technique that’s revolutionized the way we study cells.

When Itano joined Jacobson’s lab in 2007, his research could be divided into two parts. First, he was interested in how different pathogens are recognized by a cell. He studied HIV and the dengue, chikungunya, and zika viruses — using his expertise in microscopy to do so.

With his background in engineering, though, he was fascinated by creating better tools to improve the broader world beyond cell biology. One was a solar-powered vaccine cooler for the simple and safe transport of medicines to the hard-to-reach places of the world.

“I was so impressed he was doing this,” Burridge admits. “It wasn’t a cell biology project, but he was using his intellect and physics and engineering skills to develop this cooler system, which he could see was needed. I just thought that was such an admirable objective.”

“Ken figured we’d discover a better way to make vaccines more stable — and we did — but that the technology we’d need to distribute them would be harder to produce,” Itano says. “He understood the dynamics of community and politics and funding and access and believed we should get resources to all populations. I think he was a true humanist in that: Science is meant to help the world, not the people closest to the hospital.”

Maryna Kapustina, an associate professor of cell biology and physiology, joined Jacobson’s lab in 2006 as a postdoctoral researcher. A biophysicist, she specialized in using nonlinear equations to create biological models for projects. Eventually, she realized she needed to develop her skills in biology to better understand the research being conducted. So she started running her own experiments.

Despite the time required to learn a new field, Jacobson was extremely supportive. Today, biology and microscopy sit at the center of Kapustina’s research focus.

“Ken was a person who everybody respected,” she says. “He was a solid figure that everybody could talk to, whose advice and voice would be listened to. I think that’s important to have in academics.”

“Ken was my calm oasis in the midst of graduate school,” Itano says. “His door was always open.”

Itano joined the Jacobson Lab during a time of great change. After years of studying developmental biology, she decided to switch her research focus to quantitative biology, which answers biological questions using mathematics, statistics, and computer technology. She’d taken a class that Jacobson helped teach and thought he might make for a good mentor — but she knew he wasn’t taking graduate students. Plus, most of his researchers had backgrounds in physics and engineering, not biology.

Jacobson invited Itano to a team lab meeting that included visiting scholars and some biologists he’d just hired for a project and observed how everyone interacted. Then, he let her decide whether she wanted to join his lab.

“He put the decision on me as a scientist, and I appreciate that so much now. That’s so different from how these things normally happen,” she says. “And I think Ken recognized how hard it was for me to switch paths and supported that in a non-emotional way that I appreciated. He gave me room to focus on the science and had this calm faith that things were going to work out.”

Itano left the university in 2012 to take a position as a postdoctoral researcher at Rockefeller University. Five years later, when the director position of the UNC Neuroscience Microscopy Core became available, Jacobson contacted Itano to let her know. When she came to campus for the interview, Jacobson and Kapustina watched her infant daughter so she wouldn’t have to worry about finding childcare.

“It’s incredible, right? He just so genuinely cared about me being a mother and a scientist and sent this message of: It’s all going to work out. It’s all fine. This kind reassurance.”

Ken Jacobson was the Kenan Distinguished Professor in the Department of Cell Biology and Physiology within the UNC School of Medicine.

Eric Vitriol is an associate professor in the Medical College of Georgia at Augusta University.

Klaus Hahn is the Ronald G. Thurman Distinguished Professor in the Department of Pharmacology within the UNC School of Medicine.

Keith Burridge is an emeritus professor in the Department of Cell Biology and Physiology within the UNC School of Medicine.

Maryna Kapustina is an associate professor in the Department of Cell Biology and Physiology within the UNC School of Medicine.

Michelle Itano is director of the UNC Neuroscience Microscopy Core and an assistant professor in the Department of Cell Biology and Physiology within the UNC School of Medicine.