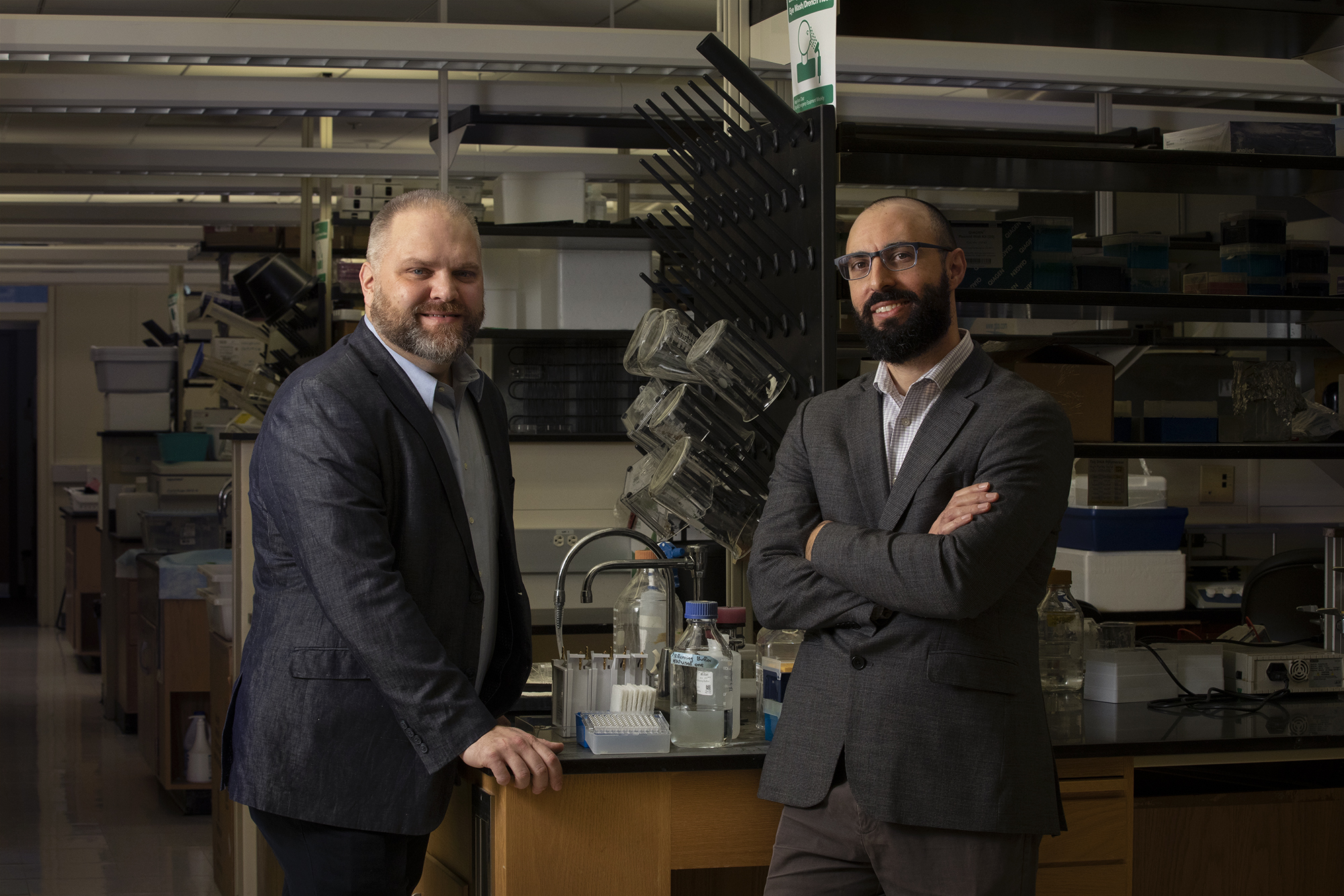 Jonathan Schisler and Todd Cohen study proteins — Schisler in the heart and Cohen in the brain. (photo by Alyssa LaFaro)
By Alyssa LaFaro
Foundations | Health

They crack jokes. They interrupt each other. They finish each other’s sentences. Jonathan Schisler and Todd Cohen’s friendship might remind you of those couples from the vignettes in “When Harry Met Sally.” When asked how they met, Schisler laughs.

“Well, Todd said we met each other years ago [at Duke], which I don’t even remember,” he says.

While they ended up going separate ways for a while, both eventually landed at UNC to study proteins. As a neuroscientist, Cohen focuses on why proteins aggregate in the brain. And although Schisler, a biochemist, works in a different field, he too studies proteins — how they form and function in the heart.

Proteins are vital to a variety of processes — from transporting oxygen to transmitting messages between cells — and are required for the structure, function, and regulation of the body’s tissues and organs. So, when they stop working, problems arise. That’s what Cohen and Schisler are focused on.

“Multiple diseases can be attributed to proteins not functioning as intended, whether that’s due to mutations, stress, age, radiation. All those things impact how proteins function,” Schisler says. “That’s why protein research is incredibly foundational to everything we study.”

Current protein studies are guiding scientists down a road of endless discoveries, from preserving biological samples like blood, human tissues, and vaccines to creating new therapies for cancer and hearing loss.

Cohen and Schisler want to know how to stop proteins from malfunctioning in order to, potentially, reverse the effects of the diseases they cause or prevent them from happening altogether. Specifically, they are looking at how faulty proteins cause Alzheimer’s disease.

Imagine how getting behind on your laundry disrupts the synergy of your closet. Shirts drip from shelves, sweaters sit balled up in the corner, socks of all shapes and sizes lie scattered on the floor. While these piles form separately from one another, they eventually combine into one large mass of clothing.

A similar event happens with proteins in the body. When a protein fails to fold properly, it gloms onto other misfolded proteins and forms an aggregate — in other words, a big pile of stinky laundry. These clumps can become toxic and lead to diseases from cataracts to cystic fibrosis. Proteins are the workhorses for all human cells, and when they malfunction, our bodies just don’t work as well.

Schisler focuses on protein quality control within the heart. Every week, he says, heart cells produce an entirely new set of proteins that allow it to beat consistently. When these proteins stop working and begin to accumulate, heart failure occurs.

A similar thing can happen with proteins in the brain, which leads to diseases like Parkinson’s, amyotrophic lateral sclerosis (ALS), Huntington’s, frontal temporal dementia, and Alzheimer’s. Cohen has spent the past decade trying to understand why proteins aggregate. Specifically, he focuses on a protein called tau, which is abundant in neurons.

“The field generally thinks if you prevent these proteins from clumping, you’ll cure all these diseases,” Cohen says. “So if you can prevent tau from forming, you would probably prevent the cognitive impairment in Alzheimer’s disease.”

But how can tau be prevented from forming? Cohen and Schisler may have a solution — one they’ve been dreaming up since first meeting in 2015. That dream is now on its way to becoming reality thanks to a $3.1 million grant that they received from the National Institute on Aging in early 2019.

When a brain loses neurons, it’s most likely because of failed tau proteins, according to Cohen. Since 2010, he’s experimented with how different enzymes modify tau, in search of one to stop it from misfolding and forming piles upon piles of dirty laundry in the brain.

“I always joke that he’s, like, in ‘The Matrix’ looking at all these things sprinkling down the screen and it’s tau modifications,” says Schisler, chuckling.

While Cohen was busy decoding tau, Schisler was working with a protein called chip that, turns out, performs a type of decluttering session. Chip recruits other proteins into groups and helps them restructure. More specifically, Schisler found that chip was throwing out misfolded forms of tau in the heart. As organizing guru Marie Kondo says: If it does not spark joy, toss it.

“And if it works in the heart,” Cohen says, “why not the brain?”

“With Todd, I just knew,” Schisler says. “Like I knew with my wife. I thought, This is going to be a beautiful relationship.”

“Some people just don’t click,” Cohen admits. “Even if it’s the right project at the right time, if you can’t meet and talk about it and it’s not the right fit, it just doesn’t happen.”

While Cohen and Schisler have only been working together for a few years, their collaboration has already been a fruitful one. After running some experiments, they aren’t so convinced that chip breaks down and removes tau from the body as previously thought. Instead, they believe chip refolds tau in a way that prevents it from building up and causing problems.

“Chip reshapes tau — and that’s not to be taken lightly,” Cohen points out. “You might think, Oh, it’s just a minor incremental advance. It’s an important thing. It makes a world of difference when you’re in a brain and trying to get rid of a protein versus reshaping it. It will change how we treat patients.”

If tau is so problematic, why don’t we just remove it? Well, it’s one of the most abundant proteins in the body. And, according to Cohen, researchers still don’t really know what it does beyond providing some stabilization within neurons, so getting rid of it could harm cells in the long term.

“There are companies trying to remove it completely,” Cohen says. “But the problem is, if it’s really important in providing some stability function, you could imagine that people who don’t have tau might have some longer-term problems.”

To further explore the purpose of tau, Cohen and Schisler are using their recent grant to run a large-scale study on mice with Alzheimer’s disease. Across their lifecycle, they will administer chip to observe how it affects tau at different stages of the disease.

If a chip therapy is utilized in patients with early-onset Alzheimer’s, could it stop the disease from progressing? “That would be cool,” Schisler says. “But, to me, the bigger, more exciting question is this: Can we take an animal that already has this bad tau and get rid of it? We want to know if we can affect the disease after it’s already started.”

Since most doctors aren’t searching for signs of Alzheimer’s in younger patients, catching it early is rare — and getting an accurate diagnosis can be frustrating. A diagnosis is more likely to occur in the middle of the disease’s progression. The ability to revert or stop the damage that’s already been done would be a game-changer.

For Cohen and Schisler, the game has just begun. They will spend the next two years continuing to study chip and tau, working to ultimately develop a treatment for Alzheimer’s. They are grateful they don’t have to take on the task alone.