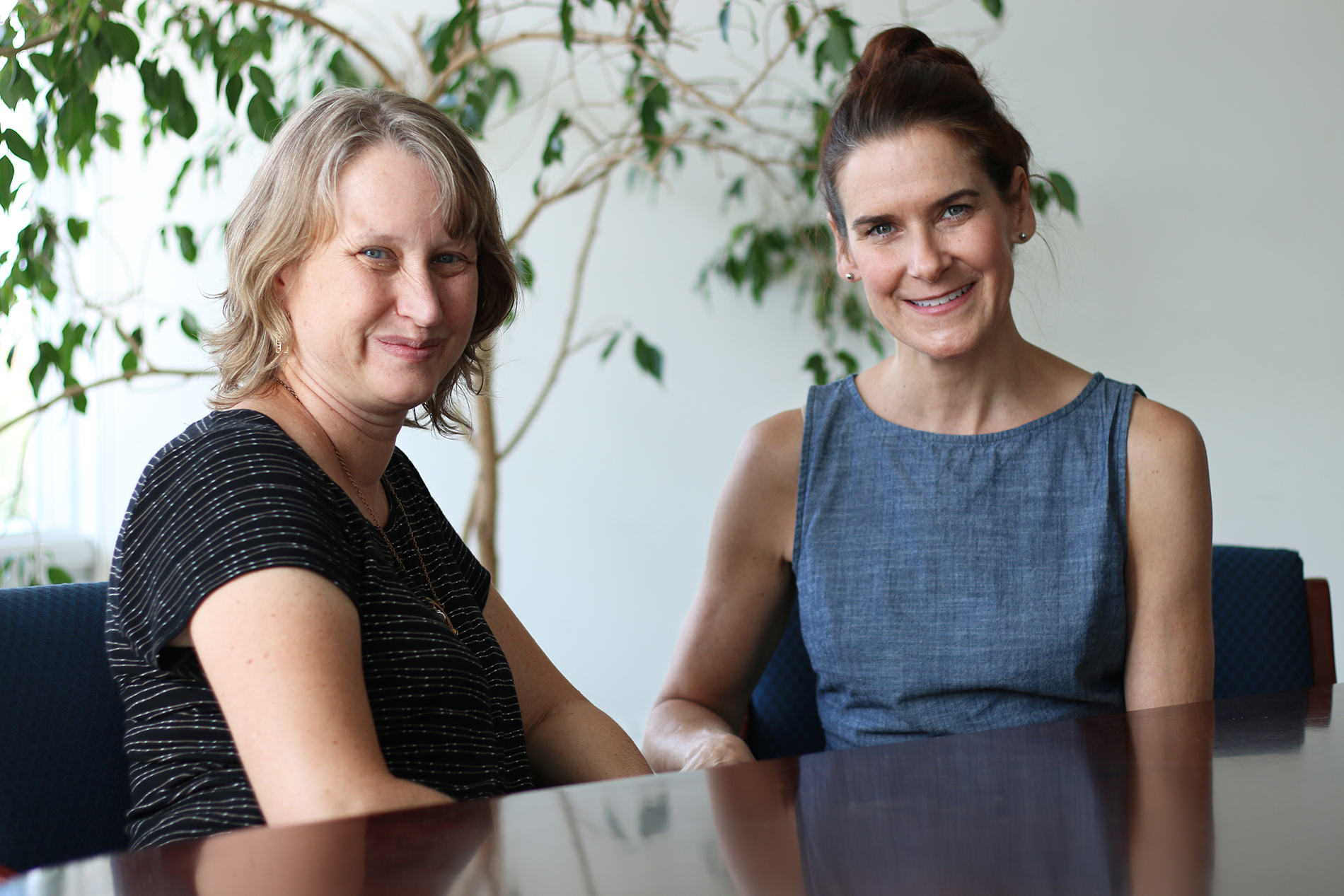 photo by Alyssa LaFaro
Psychology and neuroscience professors Andrea Hussong (left) and Deborah Jones led a working group of researchers to redefine what it means to parent in today's world.
By Alyssa LaFaro
Society

If pop culture is any indicator, today’s family has strayed far from the days of “Leave it to Beaver.” Ward and June Cleaver, the idyllic suburban parents of the mid-20th century, have been replaced by characters like “Modern Family’s” Jay Pritchett, a patriarch remarried to a woman closer in age to his own grown children than himself. Where the Cleavers and their two sons represent the small, nuclear family of the ’50s and ’60s, the Pritchetts portray the complexity of present-day family dynamics. While Pritchett’s character, in particular, values tradition, his Colombian trophy wife and children carry the show into the 21st century. Just take Pritchett’s son Mitchell, who’s raising his adopted, Vietnamese daughter with his partner, Cam.

In 2015, the Pew Research Center reported that only 46 percent of American families included two parents still in their first marriage — that’s 27 percent lower than the families of 1960. The remaining 54 percent includes single parents, cohabitating parents, stepparents, and grandparents. And that’s not the only shift. Households are increasingly multicultural. While white families still make up the majority at 56 percent, Asian and Latin American families are gradually catching up; and interracial marriages have doubled since 1980.

Andrea Hussong and Deborah Jones, both psychology and neuroscience professors, want to know how families will continue to evolve as the world diversifies — specifically, how parents can help their teenage kids navigate these changes.

“The parenting theories from 50 years ago focus primarily on white, middle-class families,” Jones points out.

“Parts of them still work, parts of them may not, parts of them we’re not sure about,” Hussong adds. “We have a lot of questions. For example, there’s new science on the neurobiology of adolescence and, as we understand that better, does that change how we parent? How about social media? The jury is still out whether parenting is different online versus offline.”

In 2016, they formed a working group of researchers through The Center for Developmental Science to help redefine what it means to parent in today’s world. Led by Jones and Hussong, and funded by the Society for Research on Adolescence, the team included faculty and students from UNC, UNC-Greensboro, Duke University, Vanderbilt University, and Arizona State University.

For months, they spent hours sitting around a table in a large conference room in Hyde Hall called the “incubator room,” discussing the existing parenting theories and identifying new themes. “We liked the name because it captured the spirit of what we wanted to do,” Hussong shares. “We weren’t after the quick answer, the soundbite, or the single finding. We were after the deep ideas that underlie and shape a field. For that, deeper reflection and incubation are a must.”

“And then we divided and conquered,” Jones says.

“Everyone had homework,” Hussong adds. “I think people really rose to the challenge.” The result was nine academic papers spanning the fields of psychology, anthropology, sociology, social work, and public policy — all of which were featured in a special issue of the Journal of Research on Adolescence in August.

A different kind of maturity

The papers covered a variety of topics from the effect of parental warmth and control on children, to an analysis of parent-adolescent socialization in low-income white families, to understanding how parenting affects sexual and gender identities. After reviewing all the papers in their entirety, the researchers developed three suggestions for socializing teens about diversity.

The first task parents should consider undertaking is helping their children figure out where they fit in within this multicultural world. This may include helping youth develop a positive racial/ethnic/cultural identity, instilling cultural pride, responding supportively to youth in defining their sexuality, and recognizing the rewards and connections offered by those living in varied family structures, explains Valerie Malholmes — Chief of the Pediatric Trauma & Clinical Illness Branch within the National Institute of Child Health and Human Development — in her commentary on the project.

Encouraging adolescents to increase the value they place on others and decrease their fears of difference will nurture their intercultural maturity, the researchers suggest. Parents can accomplish this, for example, by exposing their children to other social groups — something that may help teens navigate social changes associated with independence, connection, and social prestige.

To understand that the world sometimes rejects people based on difference, parents can teach their children about cultural pride, as well as coping mechanisms for stress. This can aid youth in facing bias and navigating issues of belonging, according to the research team.

“We want to push the conversation,” Hussong says. “All of these papers are tackling difficult topics — hot topics in the communities we’re living in now.”

To truly understand how to parent in today’s world, UNC sociologist Lisa Pearce wrote a paper for the series that details the changing demography of the American family, which she describes as more heterogenous and fluid than in decades past. “These changes are due to increases in never-married, single parents, divorce, cohabitation, same-sex parenting, multi-partnered fertility, and co-residence with grandparents,” she writes.

She and her research team focused on all parents, siblings, and family members who play a role in adolescents’ lives, recognizing that some live in the same household while others do not. Using this approach, she defines families as social networks, placing adolescents at the center with links to members based on family functions or relationships.

“The use of social network […] methods has the potential to transform the study of adolescents’ family contexts and parenting by providing better coverage of family members and processes,” Pearce writes. “Rather than […] consider[ing] one aspect of family structure at a time, these methods allow the complexity of families to be more fully captured.”

In the fall of 2017, Hussong and Jones asked all of the researchers on this project to present their papers at the Carolina Consortium on Human Development — a weekly speaker series hosted by The Center for Developmental Science. Students who attended served as real reviewers, offering commentaries on both the strengths and weaknesses of the research presented.

“The students who attend get the opportunity to sit down with the senior researchers in the field and ask questions, push, challenge,” Hussong says. “They grew really invested and committed to this project. It really made the research feel more relevant, even though we’re about 50 years behind.”

Jones stresses that they don’t know all the answers. “Maybe we even started off with that — that there was this right answer for what we know about adolescent parenting,” she says. “But in the end, I think we just came up with more questions.”

Both Hussong and Jones want other scientists to follow-up on their questions and create tools for parents and other researchers to utilize — something they’re proud to say is already happening. Pearce has applied for funding to continue her research on these topics, and Jones’ PhD student, April Highlander, just received a National Science Foundation Fellowship to expand upon her work with Jones. The research team has developed an online video and discussion guide with the hope that these conversations will continue within university classrooms across the nation.

“It would actually be fabulous to hear people disagree with us,” Hussong says. “Then it becomes a conversation that’s enriched by a lot more voices than the ones who originally sat around the table.”

Andrea Hussong is a professor in the Department of Psychology and Neuroscience within the UNC College of Arts & Sciences.

Deborah Jones is a professor in the Department of Psychology and Neuroscience within the UNC College of Arts & Sciences.

Lisa Pearce is a professor in the Department of Sociology within the UNC College of Arts & Sciences.

Valerie Malholmes is chief of the Pediatric Trauma & Clinical Illness Branch within the National Institute of Child Health and Human Development.