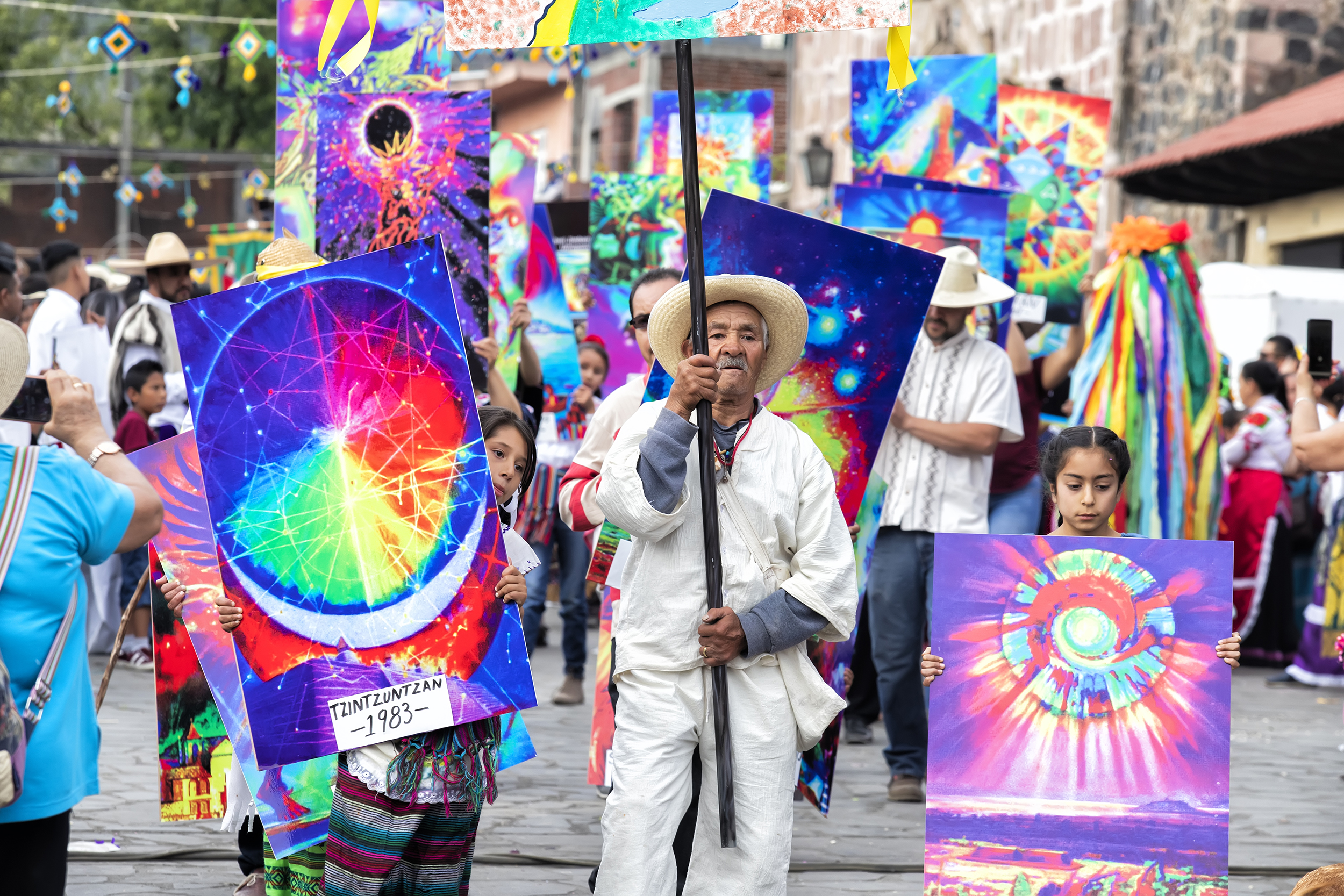 Each year, the P’urhépecha people celebrate the new year through a ceremony called the New Fire, or Kurikaueri K'uínchekua, when one community literally passes a flame that’s been lit all year onto another. The first modern P’urhépecha New Year took place in Tzintzuntzan, home to the culture’s most famous archeological site in Lake Pátzcuaro, Mexico. The 2020 ceremony, pictured here, took place on February 1 in the community of Capácuaro. (photo courtesy of Pena Romano/Wikimedia Commons)
By Alyssa LaFaro
Society

Maria Gutierrez is descended from the P’urhépecha, an indigenous group from a region along the Pacific Coast called Michoacán. Their language is considered an isolate, which means it’s not connected with any other linguistic family in the Americas — or the world. While 15 percent of Mexico’s population identifies as indigenous, only 150,000 still speak P’urhépecha.

Gutierrez, born and raised in Mexico through her late teens, speaks Spanish. The last people in her family to speak the P’urhépecha language were her great-grandparents. To learn why, she began asking her aunts and uncles to share stories about them. They told her that her great-grandparents would usually speak to one another in the language, but never the children. As the generations continued, fewer and fewer people spoke P’urhépecha.

In 2016, while working on her PhD in Native American studies at the University of California, Davis, Gutierrez began taking P’urhépecha courses at a language school in Michoacán to bolster her field of study and form a deeper connection with her ancestral history. She found that many of the P’urhépecha students she attended classes with expressed their desire to learn English so that they could go to graduate school or find jobs in the states. 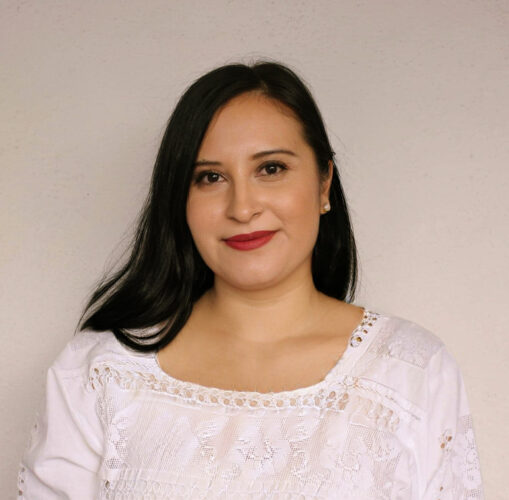 Gutierrez’s thoughts began churning. While learning English is practical, its adoption can serve to undermine efforts to maintain an ancestral language. But one can just learn and speak both, right? She found it wasn’t so simple.

“People, especially indigenous people, have to navigate these larger societal structures, where speaking your language means experiencing more discrimination and racism,” she says. “That is a pattern I have seen in many of the P’urhépecha communities.”

In May 2020, Gutierrez was awarded an Emerging Voices Fellowship from the American Council of Learned Societies. The one-year program placed her at Carolina, where she’s working remotely as a postdoctoral researcher with the Center for the Study of the American South and teaching a course in the Department of Women’s and Gender Studies. It also provided funding for her to pursue a podcast project to record the stories of P’urhépecha migrants.

The podcast is part of Gutierrez’s larger, overarching work with Radio Uekorheni (pronounced u-e-co-ren), a community radio station based out of Huecorio, Michoacán, Mexico. She joined the station in 2017 and has included it in her research projects ever since.

“I was seeing community radio [programs] booming in other communities, and how they acted as a central platform for communication — not only within the community but migrants who leave and want to stay connected.”

While growing up in Michoacán, Gutierrez and her family would listen to music and a variety of talk programs through XEPUR La Voz de los Purépecha, a local P’urhépecha-language radio station located in the community of Cherán.

Community radio stations are “the most humble, hyperlocal institutions in the Mexican media,” according to a 2019 article from the Columbia Journalism Review. Organized by community members who want to share their cultural, political, and artistic voices, they are a resource for both locals and migrants who want to stay connected to their hometowns from abroad.

“Community radio is not only about playing music in the language — which is very important because it revitalizes and preserves and transits the language — but it’s much more than that,” Gutierrez explains. “It’s creating content that is relevant and culturally specific to the community.”

Upon returning to Mexico to work on her dissertation in 2015, Gutierrez learned about a local station in Huecorio that had just shut down after 14 years, dissolving due to internal issues among its organizers. When she learned about a group of people interested in rescuing the former radio station space to create a new one, she decided to join them and help.

For the past six years, Gutierrez has worked develop programming for Radio Uekorheni. She’s been instrumental in expanding the reach of the radio through podcasts that can be listened to online, rather than only on devices in homes or cars within Huecorio.

Since the radio station is mostly run by young women, Gutierrez and other members decided to create a podcast for women to talk about their rights and representation within P’urhépecha society. One young woman Gutierrez interviewed, for example, shared her disappointment and discomfort about the fact that unmarried women aren’t allowed to participate or vote in communal assemblies. 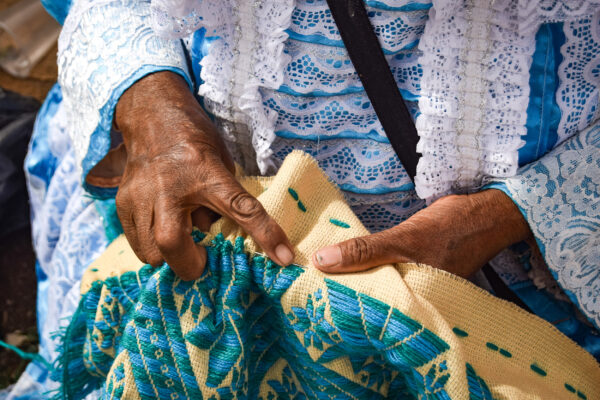 Another topic Gutierrez often speaks with women about is the P’urhépecha practice of embroidery and how many of the younger women from her hometown don’t engage in this tradition. In response, Gutierrez helped start a local embroidery circle for women to gather, learn the craft, and talk about different aspects of P’urhépecha culture. (photo courtesy of Viztani/Wikimedia Commons)

“[That practice] doesn’t align with the traditional P’urhépecha belief in parity and complementarity and the equal relationship between men and women,” Gutierrez says. “This is an instance where I think the radio does a great job, allowing women to say what they think should change in their communities.”

Through her fellowship at UNC, Gutierrez has additionally boosted the voices of indigenous women through a course she’s teaching in the Department of Women’s and Gender Studies. Within the class, she covers women from a variety of cultures across North and South America and, most recently, hosted four speakers — two from Mexico, one from Ecuador, and one from Panama — to share their stories.

Gutierrez has also used the fellowship to develop another podcast series in collaboration with Radio Uekorheni to highlight the voices of P’urhépecha people who have migrated to the United States. She’s spent the last year recording their narratives and has partnered with the Center for the Study of the American South, which will host the recordings on its Critical Ethnic Studies website. They will be available for listening in the next few months.

Through these interviews, Gutierrez has identified two main topics: the challenges these migrants face and their efforts to rejuvenate both their language and culture.

Their greatest challenge, according to Gutierrez, is the language barrier, which can lead to discrimination and fear. Gutierrez spoke with a young man from Oregon whose mother didn’t speak English or Spanish and was afraid to leave her home because she had no way to communicate. Even if she wanted to do something as simple as get groceries, she had to ask a relative to accompany her to translate.

“The language barrier was something I experienced when I came to the U.S. It was very difficult for me to learn English,” she says. “When I hear those stories, I totally relate because I remember having that fear to speak in public and to go out because I did not understand anything.”

Other stories are more encouraging. Younger people often share their goals to connect with their P’urhépecha roots to honor their history and culture. One woman who lives in California creates art that incorporates words from the language that she has learned from family members and elders.

Gutierrez is addressing these topics academically through a book project entitled, “Juchari Anapu Jimpo! Reclamation of the Heritage Language and Identity: Social Processes, Oral Memory and Innovations in the Non-P’urhépecha-Speaking Communities of Lake Pátzcuaro.” Here, she focuses on language and cultural revitalization within the P’urhépecha territory.

After her fellowship at UNC ends in May 2021, Gutierrez will continue her work on the book and with Radio Uekorheni. She believes both are essential for documenting P’urhépecha culture and engaging local communities and other nations with that history.

“I want to highlight who we are as P’urhépecha people to show that our culture has its own language, its own world view, its own needs, and its own realities. To show that this concept of ‘indigenous’ emerged as a result of colonization. We are humans, too, and we have our own ways of conceiving the world.”

Maria Gutierrez is a 2020-21 Emerging Voices Fellow in the Center for the Study of the American South and a postdoctoral research associate in the Department of Women’s and Gender Studies within the UNC College of Arts & Sciences.