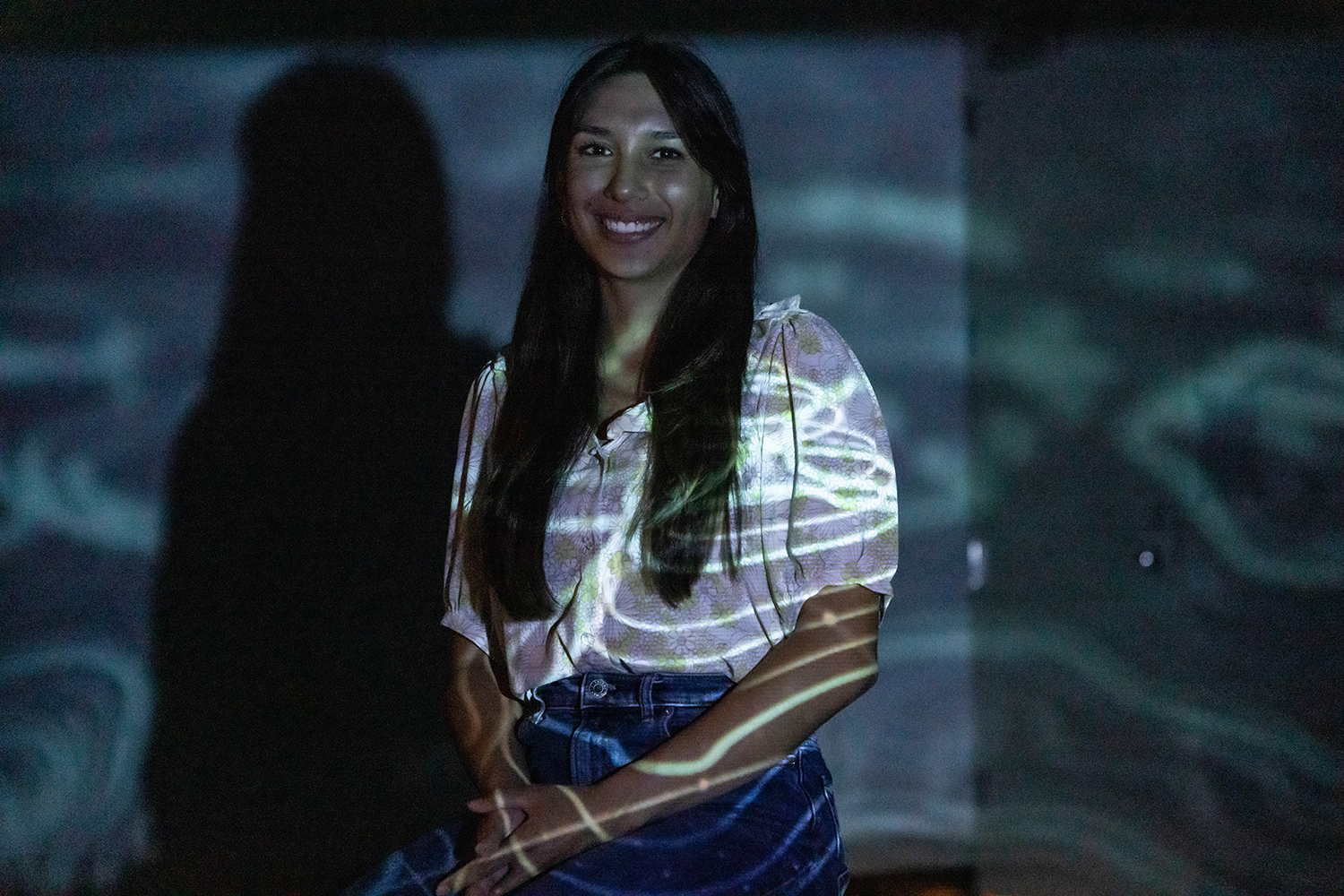 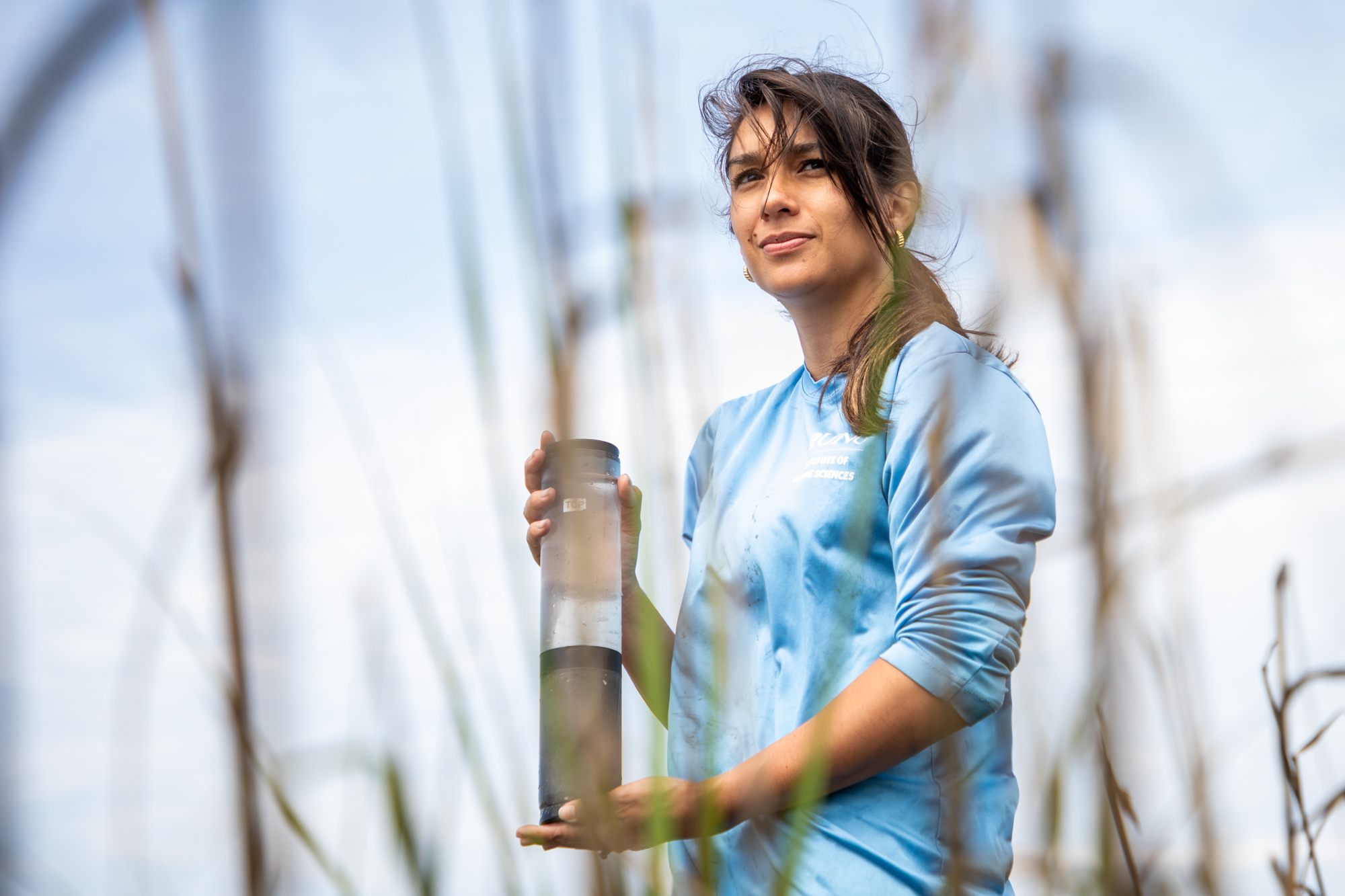 Anne Smiley, a PhD candidate at the UNC Institute of Marine Sciences, holds a soil sample taking from a nearby marsh. (photo by Renata Schmidt)

When 9-year-old Anne Smiley returned home to Pensacola, Florida, after Hurricane Ivan, one of the first things she noticed was the harsh sunlight. Her childhood neighborhood, Heron’s Forest, had served as a shady playground providing trails to run and trees to climb. But upon Smiley’s return from a week of seeking shelter at her grandparents’ house, the forest was flattened. The result? An ironic accentuation of the sunlight as a product of the devastation caused.

A longer-term impact, though, was Smiley’s piqued interest in how storms affect coastal ecology.

“As a kid, I think the storms made these foundational memories. So it’s something that I care about today,” Smiley reflects.

Hurricanes like Ivan, Dennis, and Katrina provided Smiley with firsthand experiences for the range of worries that come with storms.

“Now, as an adult, I think that must have been really scary for my parents. They must have asked themselves: What if our house isn’t there? What if we have to switch schools for our kids? What happens if my office building is destroyed?”

These concerns inform one of the projects she is working on today: an interdisciplinary effort to understand how coastal communities are resilient after powerful storms. As a part of that team, through the Institute of Marine Sciences (IMS) at UNC-Chapel Hill, Smiley researches the relationship between geography and the nitrogen cycle – work that can inform the future of water quality, coastal ecosystems, and storm resilience.

Mapping in the mud

As a PhD candidate within the Piehler Lab at IMS, Smiley’s work centers on using geographic information systems (GIS) to track the changes in land cover in coastal regions. By calculating the nitrogen removal by soils across coastal landscapes, Smiley can measure water quality regulation.

The National Oceanic and Atmospheric Administration (NOAA) has been collecting satellite images of the Eastern North Carolina region since 1996 — data that Smiley can access and reclassify as needed. These photos are high-resolution, with every pixel representing 30 square meters. Tags within the images identify different types of land coverage, like floodplain forests and salt marshes. These features allow Smiley to manipulate the data and track changes in land cover over time.

While much of her work is on a computer with topographical maps, Smiley also gets knee-deep in her fieldwork — literally. 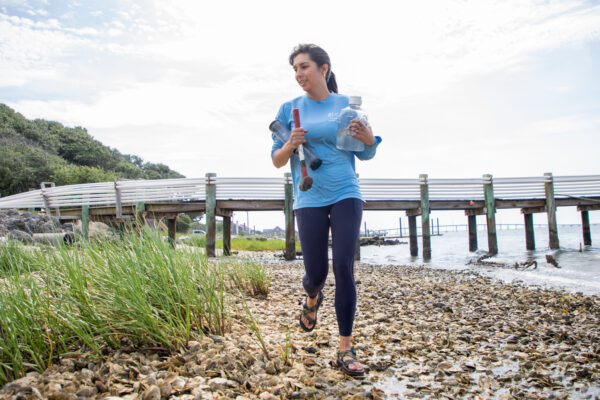 Smiley has her hands full as she looks for a spot to collect soil samples in the marsh behind the UNC Institute of Marine Sciences. (photo by Renata Schmidt)

On a bright June day behind IMS, Smiley juggles a bucket of plastic tubes in one hand and a sledgehammer in the other as she navigates over discarded oyster shells. She collects soil samples by inserting a half-foot-long tube into the soil and hammering it into the sediment. Once it’s firmly embedded, she fills it with seawater, caps it off, and pulls it free.

The first core she extracts is opaque from suspended sediments, but the second is perfect with its clear distinction between the sediment and seawater.

“I couldn’t have asked for a better core!” she exclaims in earnest.

Back at the lab, she analyzes her samples using a membrane inlet mass spectrometer. The instrument utilizes a selectively permeable membrane — a sheet with holes just the right size to allow nitrogen gas to pass through.

But why go to so much trouble to measure nitrogen?

“We’re interested in nitrogen gas because that’s the byproduct of this really important process of denitrification,” Smiley explains. “There are all of these crazy repercussions of excess nitrogen — natural, social, and economic repercussions.”

Too much nitrogen can corrode habitats, like marshes, by making them more susceptible to erosion. Excess nitrogen can also lead to algal blooms on bodies of water that can block sunlight and use nutrients that other species need to thrive. Additionally, some are toxic and can cause human illness. With a host of alarming side effects, these blooms can also lead to a decrease in coastal property values.

Scientists can help communicate the value of these habitats by assigning dollar amounts to the capacity of ecosystems to reduce nitrogen. The state of North Carolina has assigned dollar amounts between $16 and $27 per pound of nitrogen removed in the Neuse River watershed as a part of the Department of Environmental Quality’s Nutrient Offset Program.

Smiley can combine her analytical chemistry and geospatial analysis with this economic metric to calculate the dollar value associated with nitrogen removal by a given landscape — a useful tool for communicating the importance of these ecosystems to the wider community, including stakeholders. People may be more invested in conservation or restoration if they understand the importance of the land to them.

Then, Smiley takes the data collected at various locations and syncs it with the GIS database. This allows her to map her measurements across different landscapes and observe which habitats are removing nitrogen at higher rates.

Smiley’s research is not just limited to understanding the impact of nitrogen on the ecosystem. She is part of an interdisciplinary project at UNC-Chapel Hill called Dynamics of Extreme Events, People, and Places (DEEPP). The team — which involves researchers in marine science, sociology, and engineering — aims to understand resilience after large storms.

DEEPP researchers recognize that large storms, like hurricanes Michael and Dorian, threaten coastal communities across multiple realms, such as water quality, school closures, and property damage. They are interested in understanding how these communities exercise resilience.

“Resilience is tricky because it’s got a very nebulous definition that can vary depending on your perspective,” Smiley reflects. “An ecologist, an engineer, and a social scientist probably think of resilience differently, but the project diversifies the perspective by bringing together ecologists, engineers, social scientists, and a whole bunch of other people.”

A topographic map reflects on Smiley, who tracks changes in land cover over time using high-resolution photos from NOAA. (photo by Renata Schmidt)

Not only is an interdisciplinary method beneficial for science, but it likely helps communicate the importance of conservation to communities by relating climate issues to one’s daily life, such as access to roads, food, and health services.

Smiley is unsure of where this science will take her, but one thing is certain: the coastal environments, once a childhood playground and now her living laboratory, have served as an indispensable source of inspiration and information thus far.

“When you get into science, I think you can back yourself into a corner and find that niche piece where it’s been relatively unexplored.”

This niche is rife with broader implications that would allow Smiley to take her expertise in many directions. Non-government organizations, academics, and state agencies are all interested in nature-based solutions to nitrogen.

From oceans to oranges

As a kid, water was both an interest and a lifestyle for Smiley, whose father was a member of the U.S. Navy. She grew up swimming, surfing, fishing, and boating.

“Water was a constant,” she reflects. “I just felt like this was part of my identity, but in a hobby sense.”

She noticed how seagrasses would die off every year and wash up onto the beaches. She watched algal blooms grow and change and the barrier islands open and close, the landscape evolving around her.

While she loved the ocean, she was unaware that it could ever become a career path and entered college at the University of South Florida as a pre-med student. It was there that she joined the SCUBA diving club and realized that maybe her hobby could become her career.

“I didn’t know that marine science was a legitimate career path,” she says. “I mean, everybody thinks they can be a marine biologist. But what does that mean to an elementary school child?  Training dolphins?”

Despite her commitment to the field now, Smiley says her path to marine science stands in contrast to that of her colleagues, most of whom grew up knowing they wanted to dedicate their lives to it. While Smiley laments her delay upon entering the field, she is determined to ensure that children are more exposed to the possibilities of science than she was.

“How can you expect people to be passionate about something they don’t even know is a valid career path?” she wonders.

That’s why she participates in Geoscience Teaching Outdoors in NC, a free, year-long fellowship for middle- and high-school science teachers in North Carolina. Part of the Center for Public Engagement with Science within UNC’s Institute for the Environment, the program helps teachers develop curriculums to teach their students geoscience outside.

“Everybody has an outside. There’s an outside of your classroom, of your home, in your backyard,” she says. “We want to teach geoscience with the resources that are all around us.”

“It’s a fun way to get people to understand where the nitrogen is and how it moves from place to place,” Smiley shares. “It is part of North Carolina educational standards, learning how ecosystems are connected and what nitrogen is. Educators teach this stuff anyway, so why not make it fun?”

Anne Smiley is a PhD candidate in the Department of Earth, Marine, and Environmental Sciences within the UNC College of Arts and Sciences and a member of the Piehler Lab at the UNC Institute of Marine Sciences.